HISTORY
SPORTS
CURLING
by Gail Hussey-Weir
Created Oct. 2019 / Updated Apr. 7, 2022
Bell Island's first indoor ice rink opened in February 1913 on Scotia Ridge. It was reported in the Daily News that "on March 8, 1916, the local Curling Club sent two rinks to the City to compete with the capital. Dr. W.L. Carnochan was president of the Club. D.J. Jackman was vice-president, and Reid Proudfoot was secretary. Others who made that trip were A.G. Watson, Jas. Gillespie, J.L. Mews, W.D. Burpee, F.F. Berteau, D.A. Fraser, and C.B. Archibald. The games were by way of practice for the local players and were followed by a smoker."

The date of the photo is sometime between 1916 and early 1919, as John B. Gilliatt came to Bell Island  as Ass. Chief Engineer in 1916, and John J. McDougall, Manager of DISCO left Bell Island in January 1919. 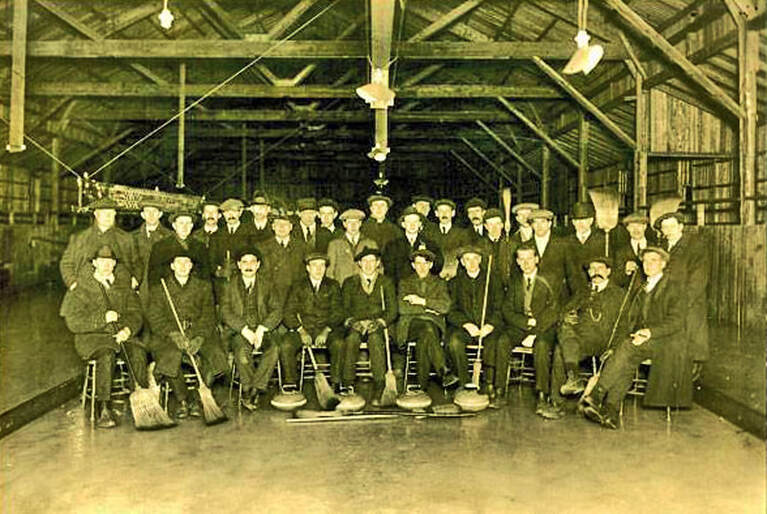 This same photo was reproduced in the February 1955 edition of the Submarine Miner, p. 8, with information from Reid Proudfoot. 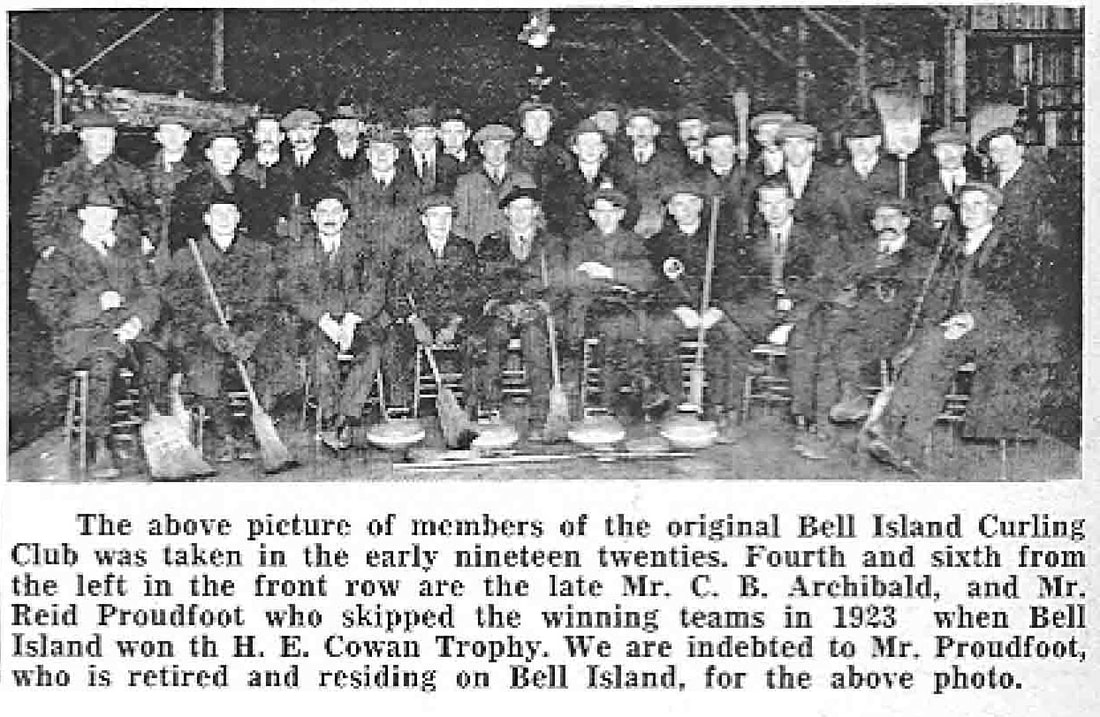 ​The October 1954 photo below is of the No. 2 Mine Hoist House with construction having been started on the north side of the building (seen in the right of the picture) to accommodate a curling rink. The original building would house the clubhouse facilities and the ice-making machinery. Photo and story from the October 1954 Submarine Miner, p. 6. 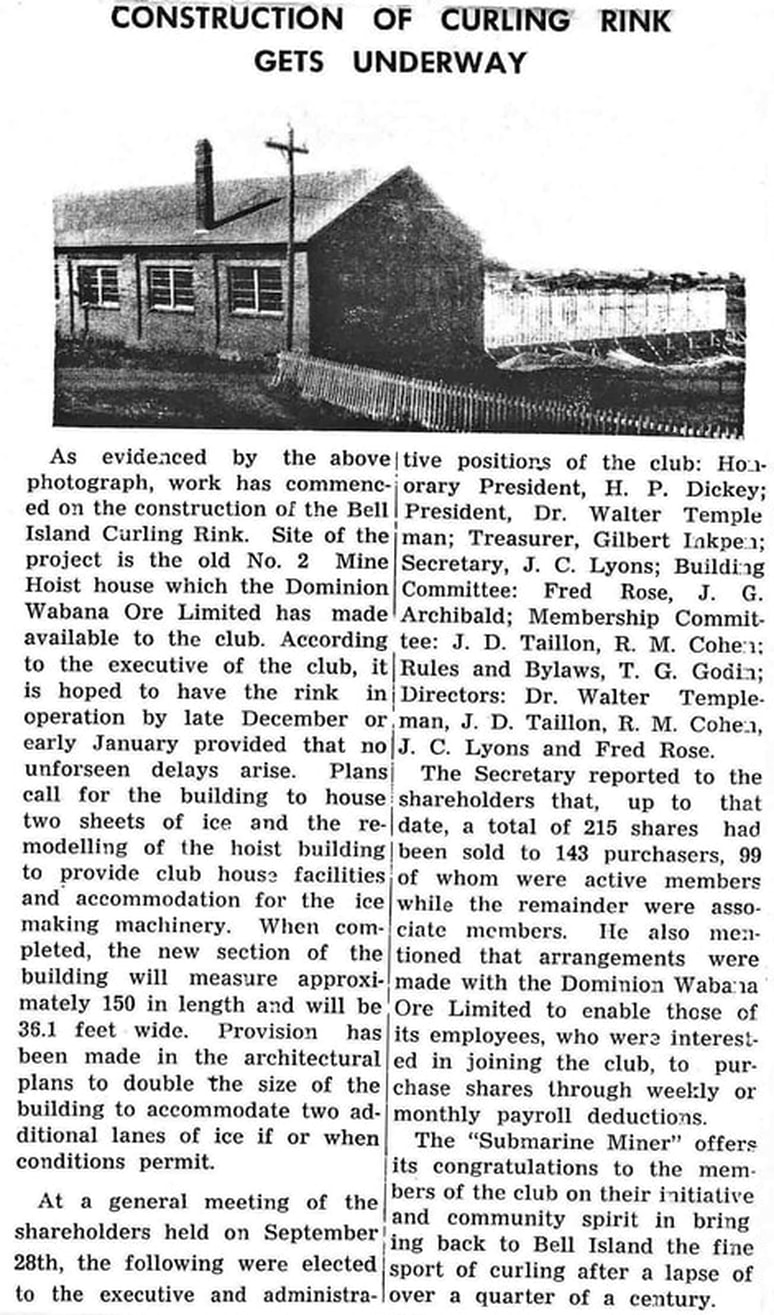 The photo below is of Jellicoe Clarke's share in the Bell Island Curling Club, 1957. Photo courtesy of Blair Clarke. 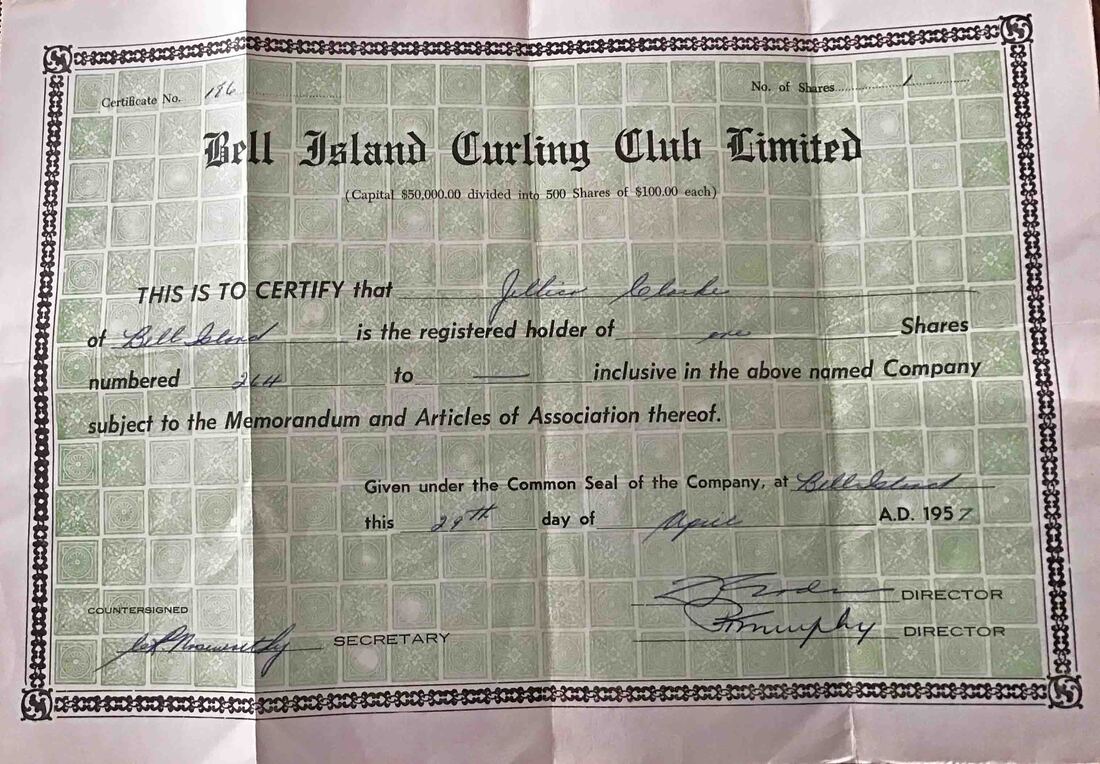 The photo below left is of what seems to be a locally-made Bell Island Curling Club trophy, possibly from the 1950s. On the right is a close-up of the club's pin that is attached to the iron-ore base. Photo courtesy of Colin Hann. 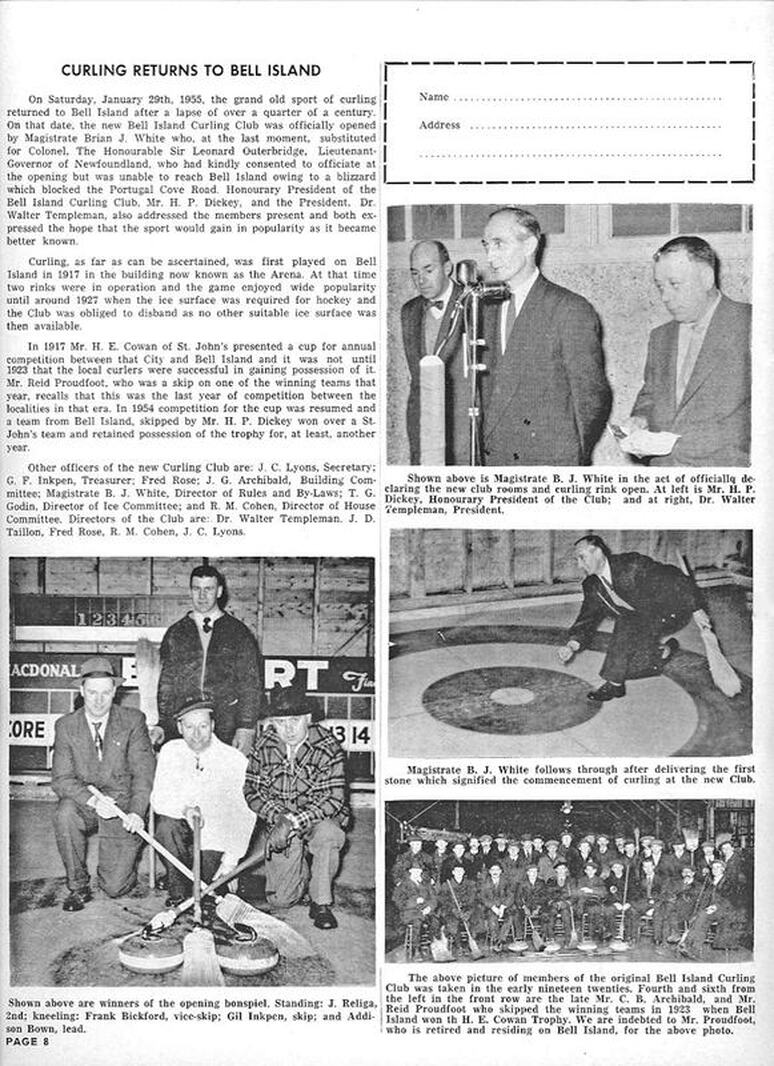 The photo below is from the February 1956 issue of the Submarine Miner​, p. 6. 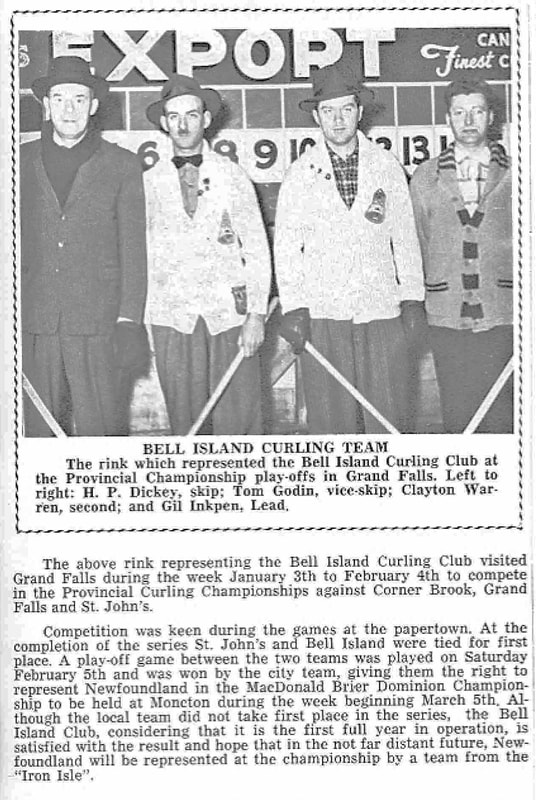 The item below showing curling trophies is from the May 1956 Submarine Miner​, p. 5. 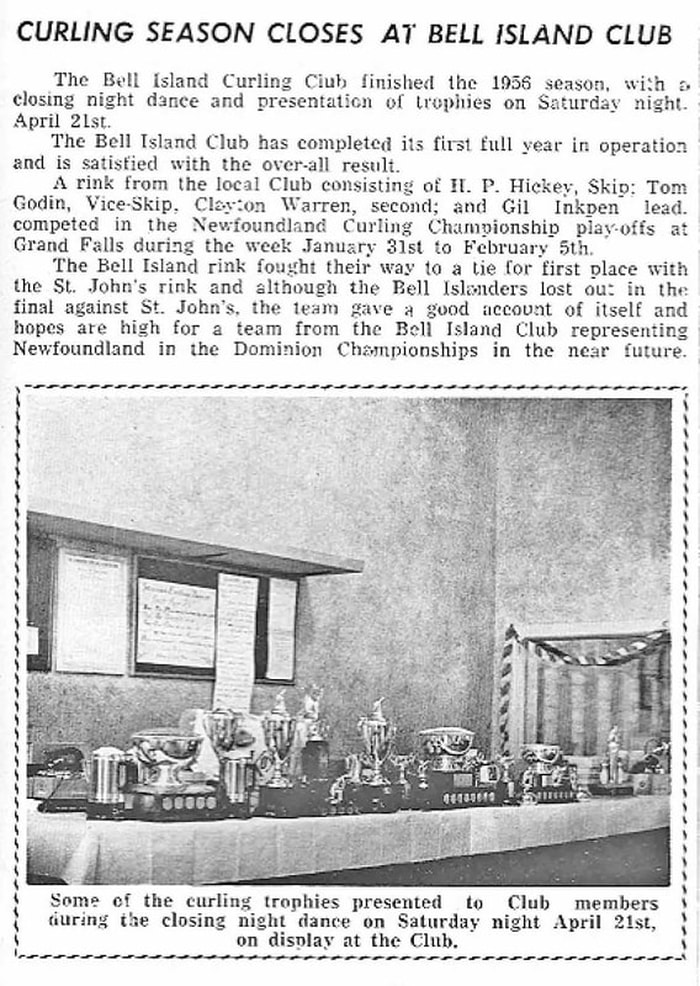 The Bell Island Curling Club reopened for the season's activities on October 19, 1956. Members of the club kept the rinks busy and the usual Saturday night dances were held at the Club lounge. (Source: Submarine Miner, November 1956, p. 2.)
"Curling Club Activities" below is from the Submarine Miner,​ February 1958, p. 8. 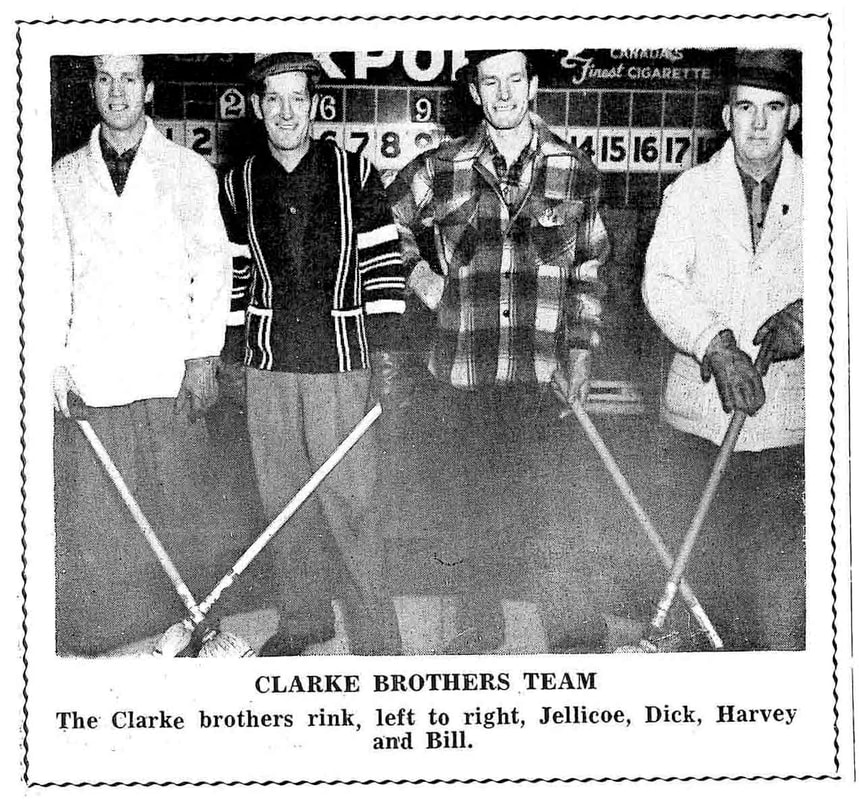 In 1959, competition at the Bell Island Curling Rink for the right to represent Bell Island at the all-Newfoundland curling play-offs at Grand Falls in February was keen. The rink skipped by J. G. Archibald won the contest from the rink skipped by Mike Stoyles by 18 to 3. The other members of the winning rink were: Frank Bickford, Steve Lahey and Harry Rose. The Bell Island rink visited the paper town during the first week of February and competed in the British Consols series. The Corner Brook rink won the series and the right to represent Newfoundland in the Dominion play-offs. (Source: Submarine Miner​, February 1959, p. 2.)

The photos below are from the March 1959 issue of the Submarine Miner, p. 8. 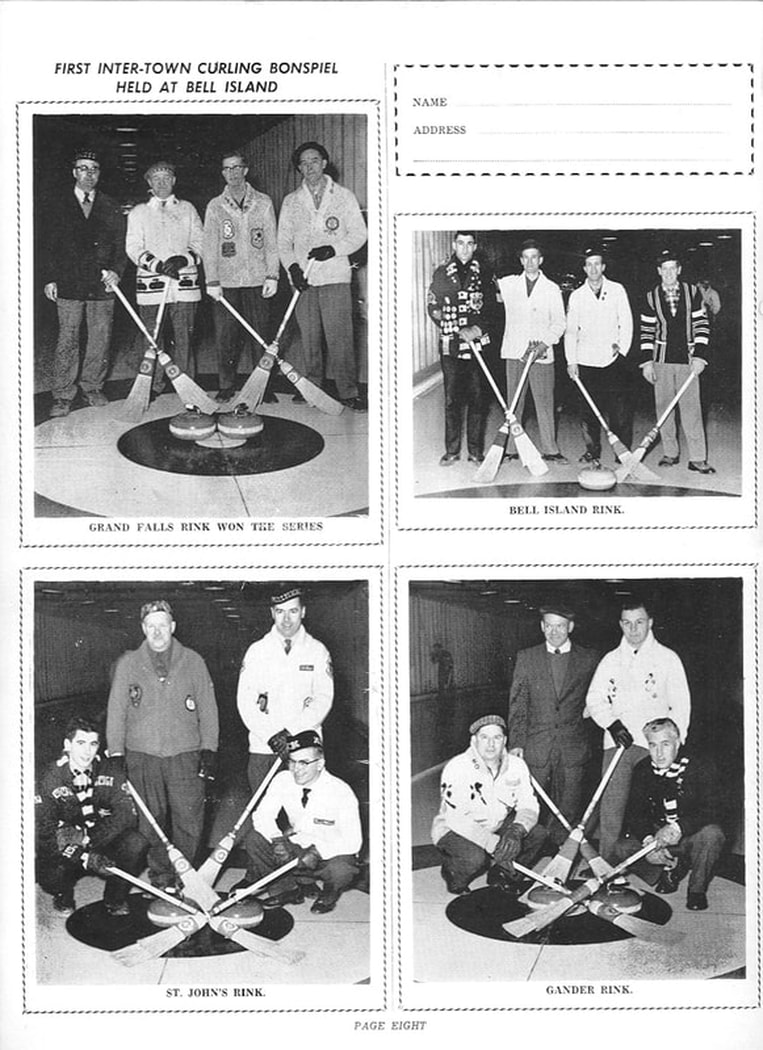 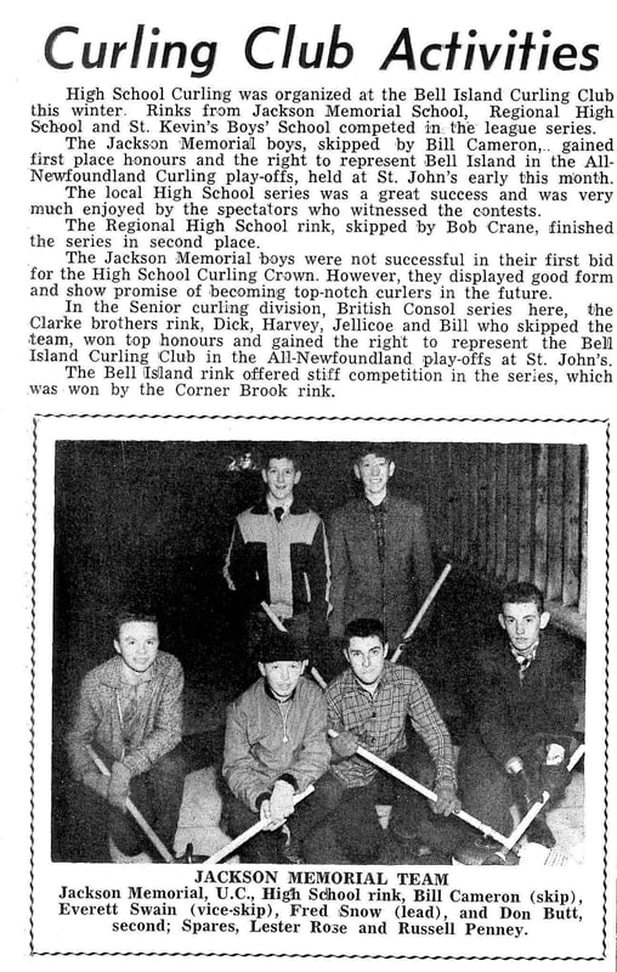 The photo below of the Jackson Memorial Curling Team is from the Submarine Miner​, January 1959, p. 6. 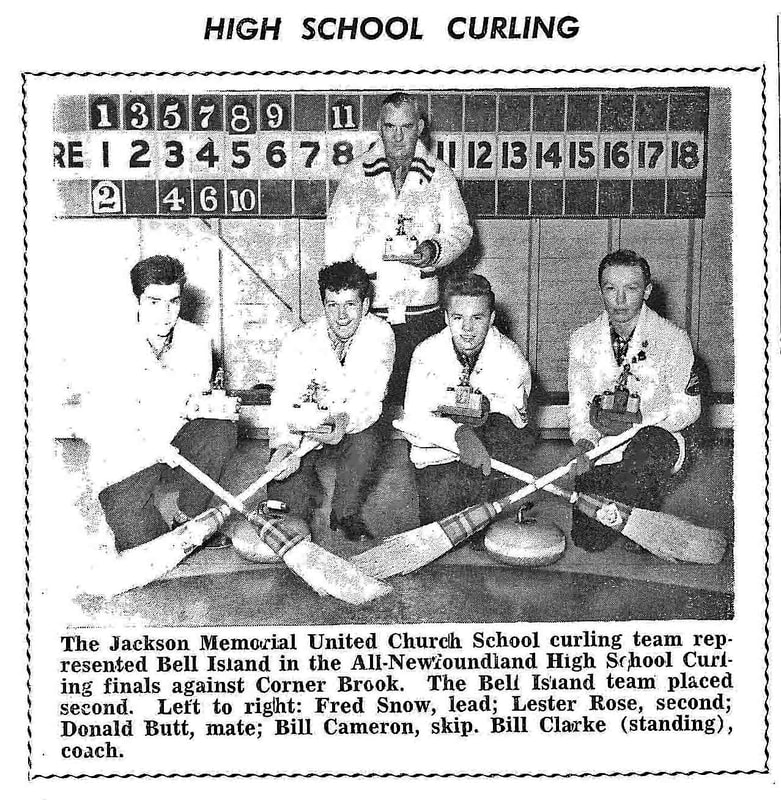 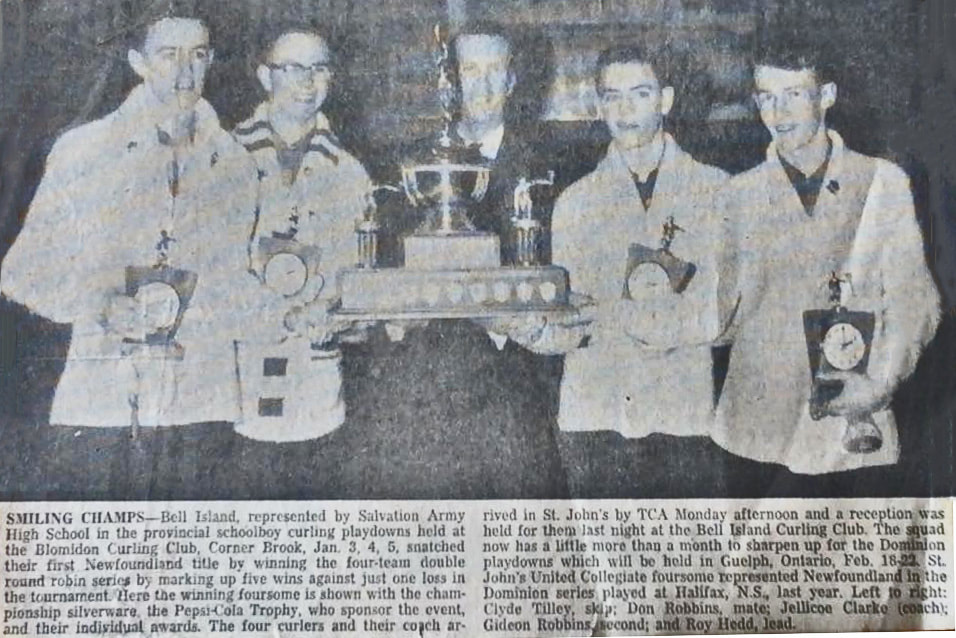 The team from Jackson Memorial School also won the 1967 Pepsi Cola Schoolboy Curling Provincial Championship, which entitled them to participate in the National Championship games held in Flin Flon Manitoba in February 1967. In the photo below, they are waiting to get the ferry on their way to Torbay Airport to fly to Manitoba on what was probably the first flight for any of them. Kneeling, L-R: Roy Eveleigh (Lead) and Wayne Bugden (2nd). Standing, L-R: Ron Saunders (Skip), Keith Tucker (3rd), and their coach, Jellicoe Clarke, who was very proud of them and the support they received, including their new matching outfits. They did not win the Nationals, but represented their province well.
Photos and information below courtesy of Blair Clarke, son of Jellicoe Clarke. 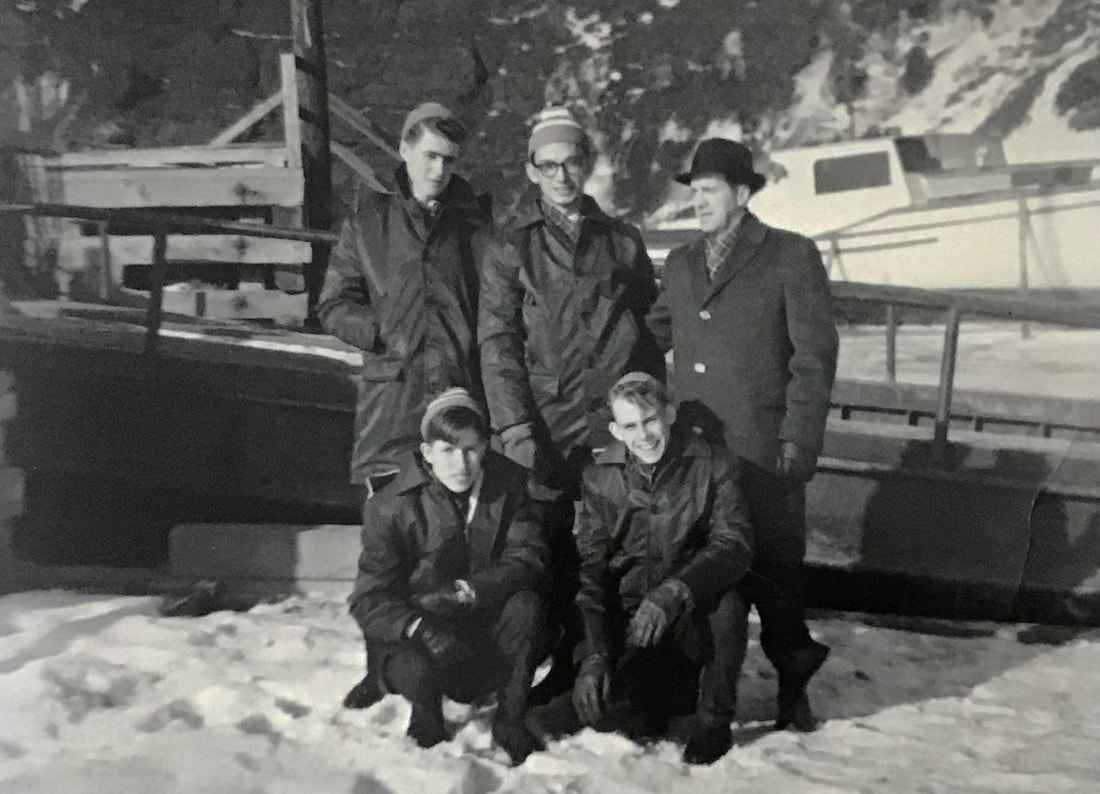 The photo below was taken on their return from the Nationals, when they were presented with the Pepsi Cola Schoolboy Curling Provincial Trophy and their individual awards. The 3 men on the left are unnamed. Starting at #4 directly behind the Pepsi Cola Trophy: Roy Eveleigh, Keith Tucker, Wayne Bugden, Jellicoe Clarke (coach), and Ron Saunders. Each of the curlers and their coach are wearing the Provincial Crest on their blazers.

Coach Clarke noted on the back of this photo that the team won the Provincials with a 5-0 record, and won the right to represent the Province at the National Tournament in Flin Flon, Manitoba. The picture was taken in the basement of the former United Church that burned down in 1992. 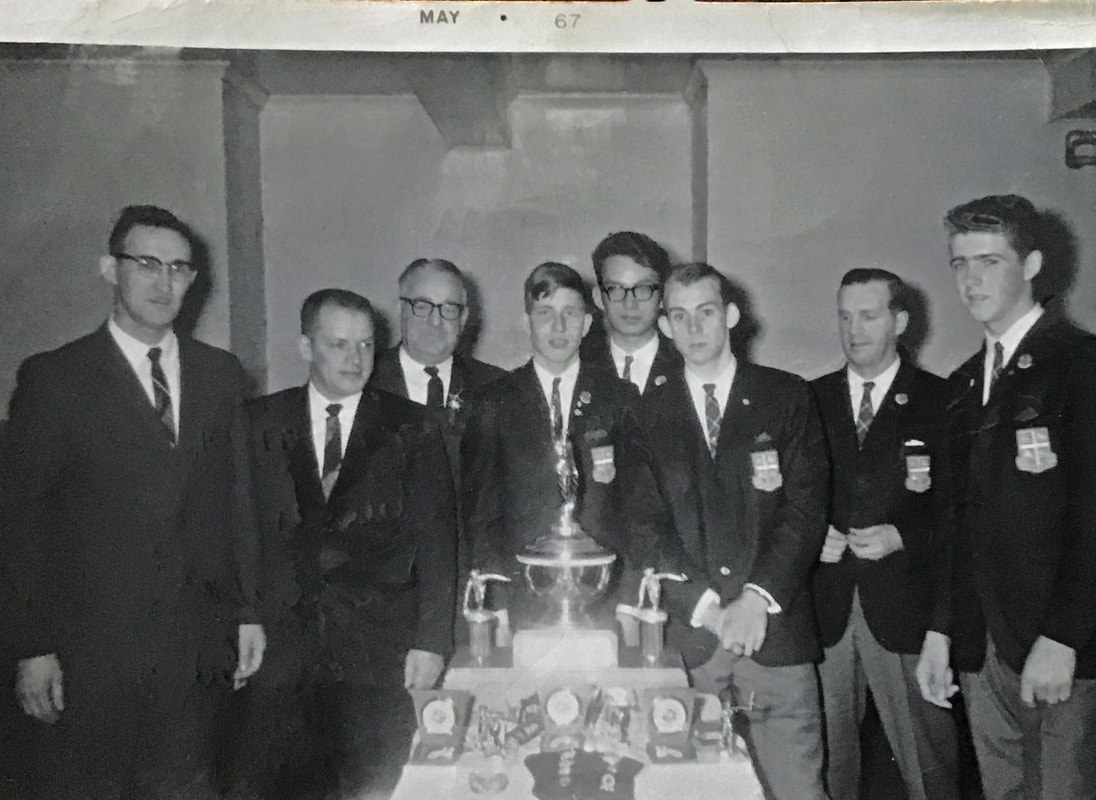 Blair Clarke attended the Bell Island Vocational School in 1970-71 and participated in the Pepsi Cola Schoolboy Curling Championship Tournament. The picture and write-up below are from the school yearbook for 1970-71, courtesy of Blair Clarke. 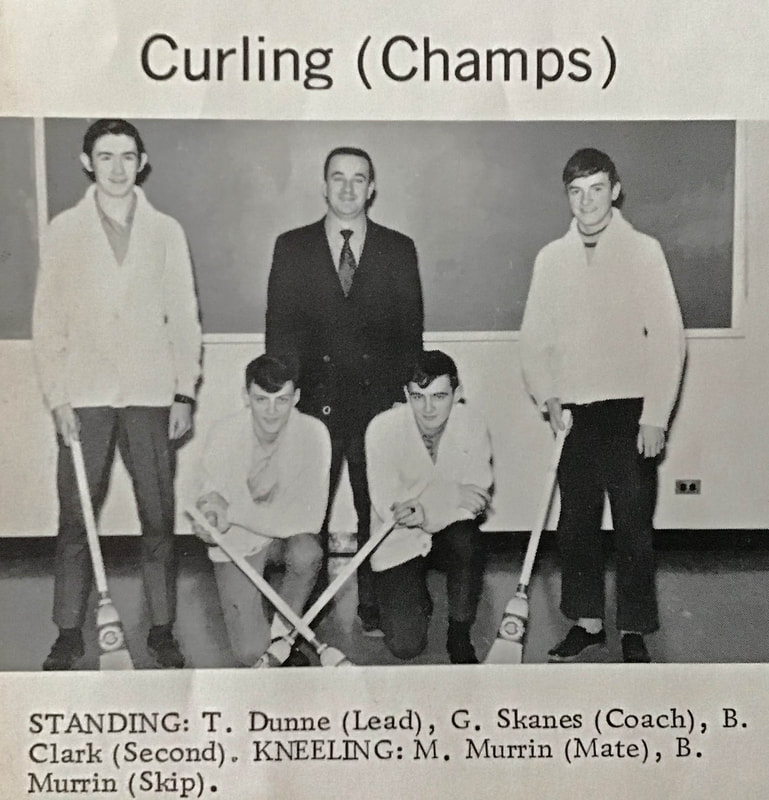 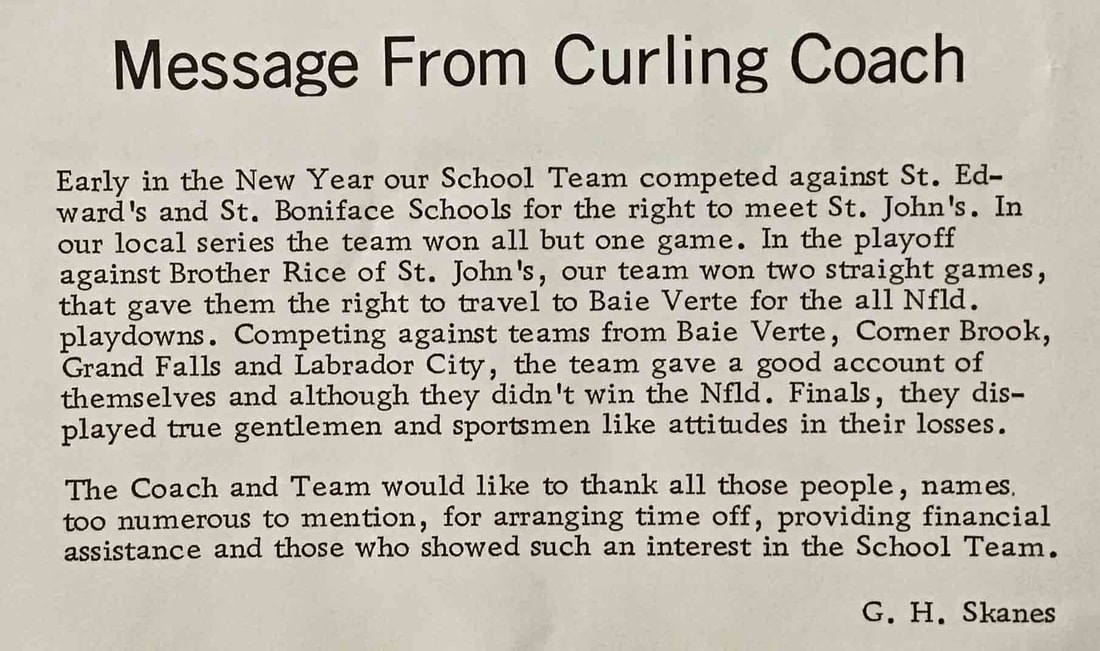 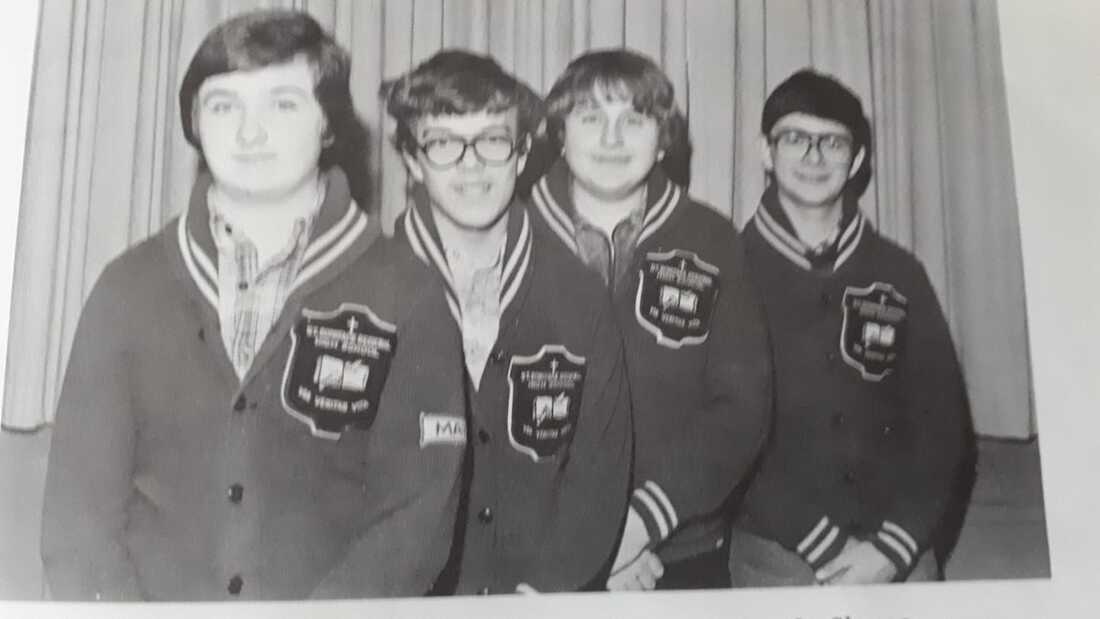