In the winter of 1902, a large fossil was discovered on Bell Island by Arthur House, who was in charge of driving Dominion's No. 3 Slope. This No. 3 Slope was not the huge submarine mine that we knew as No. 3 Mine, which was owned by the Scotia Company. Dominion's No. 3 Slope was one of their first underground mines, started after the surface ore ran out and before the wealth of iron ore beneath the ocean was even dreamed of. It came out through the cliff on the north shore and is believed to have been above what would become Scotia's No. 3 submarine slope. In the early days of the Wabana mines, both Scotia and Dominion referred to their mines by the numbers 1, 2, 3, etc. Not all of those mines proved fruitful and some were eventually abandoned. You can read Arthur House's biography on the People page (above). Arthur House kept detailed diaries of the years he worked on Bell Island and recounted the story of the fossil in the second of a 6-part series in The Daily News, March 2, 1939, page 4. Here is what he had to say about it:

The fossil was found about 100 feet from the outcrops, embedded in the foot wall next to the ore. On top of it were 10 feet of ore in place, and eight feet of rock beside the forest growth.
It was in the winter and we were using steam drills putting "down" holes, which went into the foot wall, to ensure bringing the bottom, and we were shovelling the ore thus blasted out. I noticed some fossil remains in the foot wall, and stopped the work to investigate it...A drill hole had gone through the trunk of the body and shattered it pretty badly, but not so bad that it could not be pieced together.
Mr. Grammer, our manager, had gone away for a holiday. I went at once and saw F.W. Angel and we decided to take it up piece by piece. The late Father McGrath had built a Hall at the mine, over on The Green. We had formed what we called "The Exiles Club" and had hired the downstairs part of the Hall for our recreation...
We decided we would remove the pieces of the fossil and piece them together on the floor of the Hall according as we got them out of the foot wall. This took several days as the open cut advanced. We worked our nights piecing it together in the Hall. F.W. Angel, C.J. Stewart and myself. When pieced up, it measured 27 feet 5 inches long. The tail section was in two pieces and was 12 feet long. The fin of the tail was somewhat like that of a shark.
From tip of the tail to the lower end of the body was 12 feet, and it was 8 and 1/2 inches diameter where it connected to the body. The body was 8 feet long as near as we could piece it together. Its neck and head was 7 feet, 8 inches long. One wing was extended, while the other seemed crumpled up under the body. Its head was elongated. It had talon-like members extending from the body, and on a section of the wing it had talon-like extensions.
C.J. Stewart made a drawing of it and called it "Teramorphons Dinosaurian Housei," whatever that may be...We made several blueprints of it.
F.W. Angel wrote to Dr. Adams of McGill University and sent him a drawing, who [Dr. Adams] said it was the most important discovery made in 100 years. We had kept it in the Hall all the winter until late in spring intending to set it up in plaster. Rev. Father McGrath asked us to release the Hall for the summer. F.W. Angel sent word to the stable to have the fossil removed, not thinking of the job it was. Thomas Shanahan was then in charge of the stable. Tom took a double team and some men and took it in a box cart like a load of meaningless rock and dumped it out in the old Mine House yard. It had been so fractured from blasting that it had to be carefully handled, but in dumping it, it broke it very much more.
Needless to say, when we found out what had happened, we were very much annoyed.
The late James P. Howley, Government Geologist at that time, from St. John's, came over and I spent three days with him and pieced sufficient of it together to give him a good idea, with the drawing we had made to scale.

Source: Arthur House, The Daily News, March 2, 1939, page 4.
Note: The Dr. Adams of McGill University that F.W. Angel wrote to concerning the fossil was likely Dr. Frank Dawson Adams (1859-1942), who was a renowned geologist, educator and author.
An artist's interpretation of a Pteranodon

Below is a mounted composite cast of Pteranodon Longiceps at the American Museum of Natural History, New York. Photo credit: Matt Martyniuk. 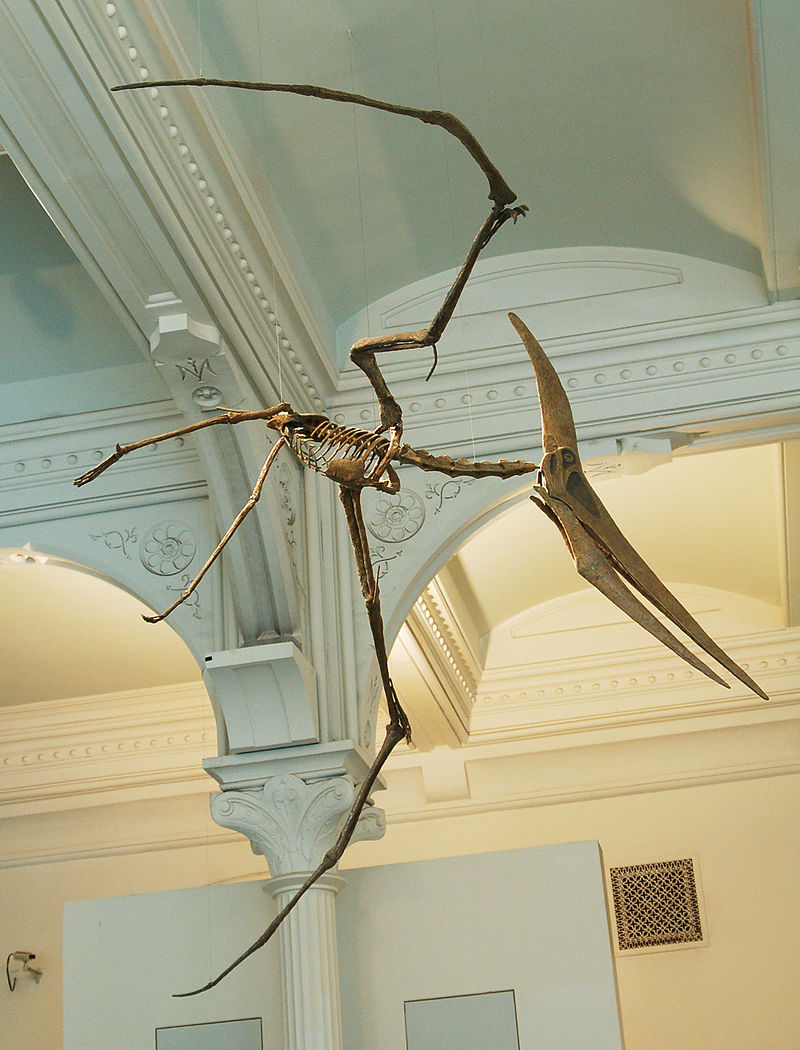