PHOTO GALLERY
ARTIFACTS
This page will feature photos and stories of man-made objects related to Bell Island's history and culture.
DOSCO Wabana Mines Safety Award, 1963
This clock was presented to Melvin Bursey of the Electrical Department as a "One Million Hours Safety Award" in 1963. Photos courtesy of his daughter, Glenda Bursey. 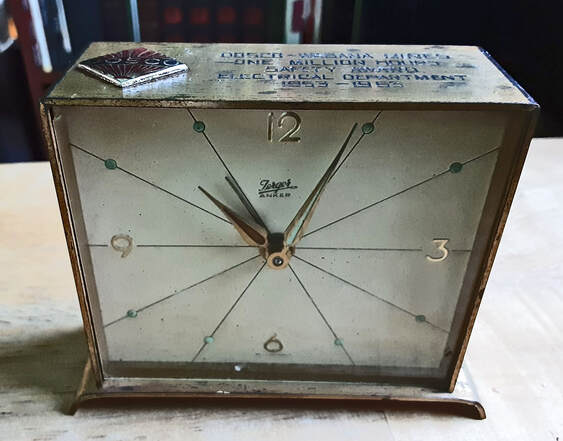 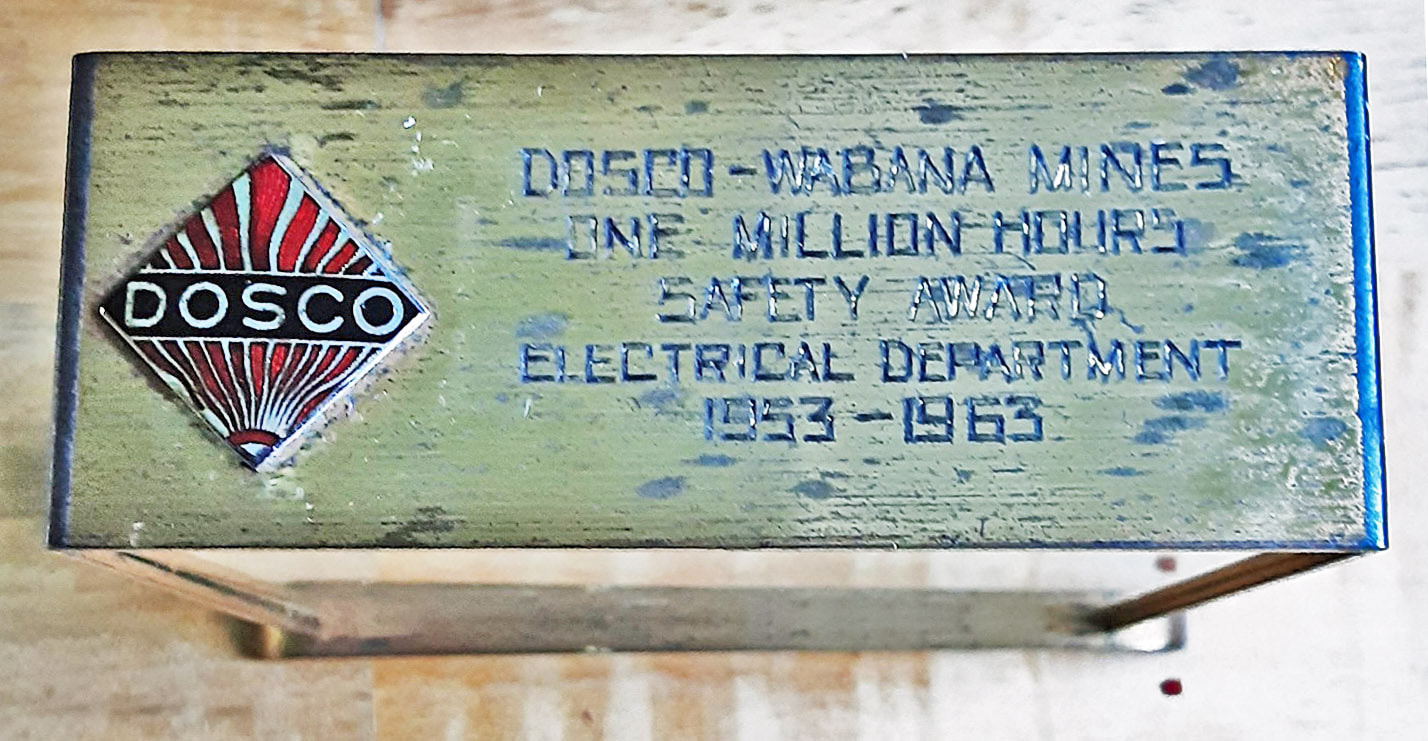 Wabana Mine Workers Union Dues Book, 1942-46
In 1941, the Wabana Mine Workers' Union was formed when DOSCO announced that mining would be decreased to half-time due to loss of markets during WWII. Led by David Ignatius (Nish) Jackman, this Union was made up of five locals, each with its own executive officers:

This dues book belonging to John F. Kent was for Local No. 1. Jack Kent worked in the Electrical Department, so was considered a "surface" worker. His book starts with January 1942, when dues were 25 cents per month. In October 1944, dues were doubled to 50 cents a month. He purchased a Union pin for 10 cents in May 1946 and stopped paying dues in November 1946. The first photo below is of the cover of the Dues Book. It measures 3 inches high by 5 inches wide. Dues book courtesy of his daughter, Eileen Kavanagh. 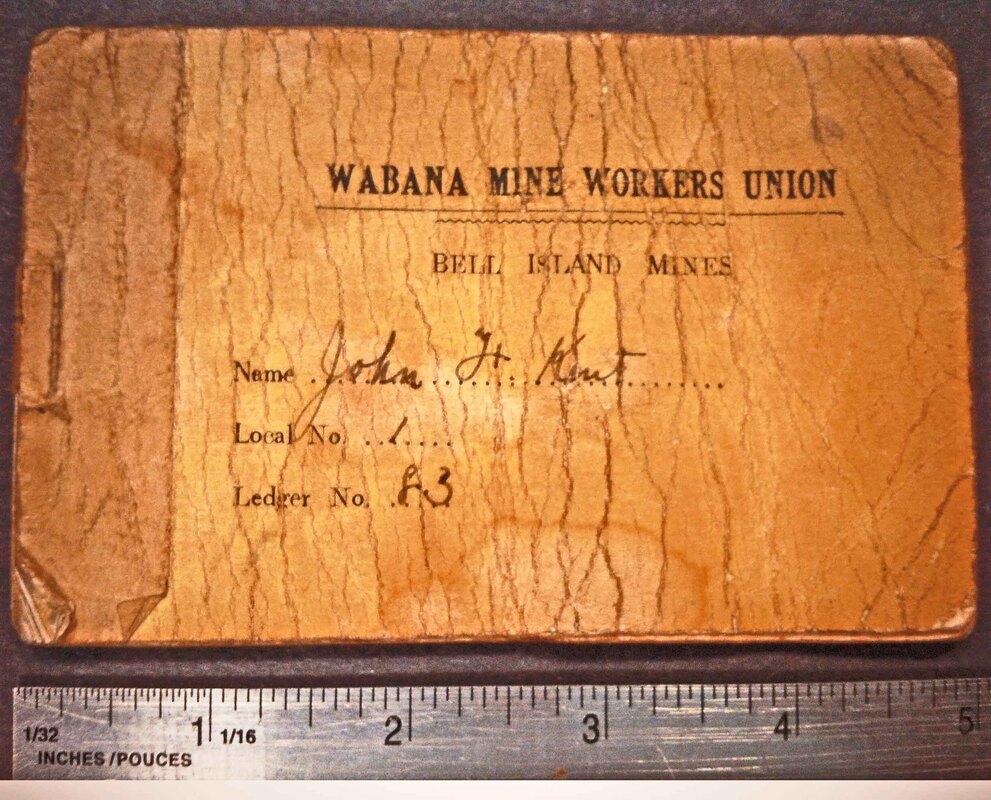 Above left photo is the first page showing dues of 25 cents per month for January to June 1942 and signed by Financial Secretary, Riv Kennedy. Above right photo shows the dues doubling to 50 cents per month in October 1944.

Below left photo shows the purchase of a pin for 10 cents. Below right photo is the last page showing dues of 50 cents per month for July to November 1946.
Weather Vane
Wabana Mine Workers Union
This weather vane was found in the former Union Hall and was presented to the Bell Island Community Museum in 2017 by Lew Kelloway. Artist Jim Curnew cleaned it up and repainted it. It is made of steel, presumably from Wabana iron ore. The man on the left is a miner holding a drill. The weather vane may have been manufactured at the Wabana Mines Machine Shop, or perhaps at the Scotia Company's steel works plant in Trenton, NS, (where all the iron ore used was from Wabana iron ore mines) probably during or shortly after WWII. The union was formed in 1941 by David Ignatius (Nish) Jackman.

​The weather vane seems to be in the shape of a World War II fighter plane, perhaps the Hawker Typhoon, a British single-seat fighter-bomber (below left). The 5-point star in a circle symbol was used on another WWII fighter plane, the Grumman F4F Wildcat (below right).
The photo below of the Union Hall in 1964 shows the weather vane above the Union Hall entrance on the pole in the right of the photo. 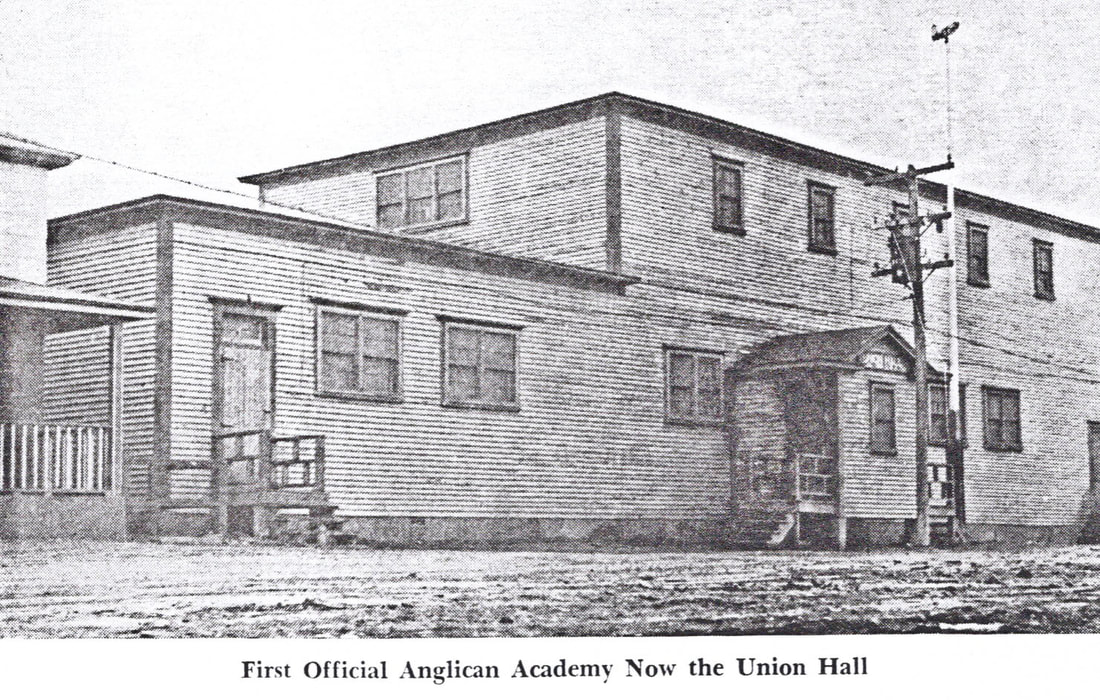 Wabana Iron Ore Souvenirs
Below are some examples of souvenirs known to have been crafted of Wabana iron ore by the mining company. These souvenirs were not made for the commercial trade, but seem to have been created in the Company Machine Shop as and when the need arose, either when some dignitary was making a special visit to Bell Island, or when one was leaving to work elsewhere. It is not known exactly when the first time was that such a Wabana iron ore souvenir was created, but the first recorded instance found in the media was in 1909 when Archbishop Howley visited Bell Island on July 10th. "At the request of the miners, he paid a visit to the mining area...An address was read and presented to His Grace with a beautiful casket containing a solid core of iron ore. The following inscription was engraved on a silver plate on the casket: Iron, taken 300 feet below sea level. presented to His Grace, Archbishop Howley by the Workmen, July 10, 1909."

Then, in September 1923, a "block of Wabana ore bearing a gold plate with suitable inscription" was presented to Brother W.A. McKay, Grand Master of the Independent Order of Odd Fellows for the Maritime Provinces and Newfoundland, who was entertained at a banquet by the local Lodge of the I.O.O.F. while on a visit to Bell Island. Addison Bown reported this event while compiling his "Newspaper History of Bell Island" in 1957, and noted that this sort of souvenir "was to be presented frequently to other visitors in years to come."
Souvenir Inkwell
The 4 photos below of an inkwell made of Wabana iron ore are courtesy of Paul Conway. His description of the inkwell:
"The body is a solid block of iron ore, nicely carved out, and the insert is brass, engraved 'Bell Island, Nfld, 1937'."

There were several instances reported in the St. John's Daily News when such items were presented as gifts to visiting dignitaries:
On Sept. 6, 1937, Sir Humphrey Walwyn, Governor of Newfoundland, visited Bell Island for the 2nd annual A.A.A. Sports Day, where he was presented with a souvenir inkwell made of Wabana ore. The first recorded instance of the gift of an engraved piece of Wabana ore was noted in the Daily News in Sept. 1923 when the Grand Master of the Independent Order of Odd Fellows for the Maritime Provinces and Nfld. was entertained at a banquet by the local lodge. He was presented with a block of Wabana ore bearing a gold plate with a "suitable inscription." Such gifts were to be "presented frequently to other visitors in years to come." In the summer of 1938, Sir Bruce Porter, who was Chief Medical Officer in charge of the Third London Hospital at Wandsworth during WWI, where he had charge of many wounded Nfld. soldiers, visited Bell Island as part of his Nfld. tour. He was given a hero's welcome and presented with an inkwell made of Wabana ore.
The 6 images below of a 1938 souvenir Wabana inkwell are from the collection of Ashley and Alex Zalkin.
The 2 images below are of an inkwell owned by Ron Fitzpatrick that had no markings. Photos courtesy of his daughter-in-law, Janet Bennett Fitzpatrick.
On June 17, 1939, their Royal Highnesses, King George VI and Queen Elizabeth, visited St. John's at the end of their tour of Canada. They had originally been scheduled to visit Bell Island that day, but the weather was so bad and seas were so rough when the entourage got to Portugal Cove, it was decided that the Maneco would take them directly to their ship, The Empress of Britain, that was anchored in Conception Bay, and from there they left Newfoundland for England.

The image below is of an inkwell on the left and a paperweight on the right, both crafted from Wabana iron ore, that were meant to have been presented to the royal couple that day on Bell Island. Instead, the pieces remained with the Company manager, C.B. Archibald. In 2019, his granddaughter, Ruth Archibald, donated the items to the Bell Island Community Museum.

Souvenir Cigarette Case
The SHIPPING SEASON in Bell Island mining history ran from about late April through to about February. Arctic ice travelling down the Newfoundland coast and packing into the bays impeded shipping most winters. The ore boat captains were treated like dignitaries at Wabana. For example, it was customary for the first captain to arrive at the beginning of the shipping season to be presented with a silk hat. Likewise, in the 1950s at least, a captain who had been on the shipping run for a number of years would be given a fountain pen to commemorate the milestone at a small ceremony of local officials. The souvenir cigarette case pictured below may similarly have been presented to a captain after a number of years, or it may have been a retirement gift, or simply a souvenir at the end of a particular shipping season. It looks to be made of steel; if so, it would be made from Wabana iron ore. The flag is that of Nova Scotia and the case was likely made at Trenton, NS, where the steel manufacturing facility was owned by the Scotia Company that started the Wabana Mines in 1895. The engraved initials look like “WMS,” perhaps the initials of the captain who received this gift. Photos courtesy of Jesse Houle. 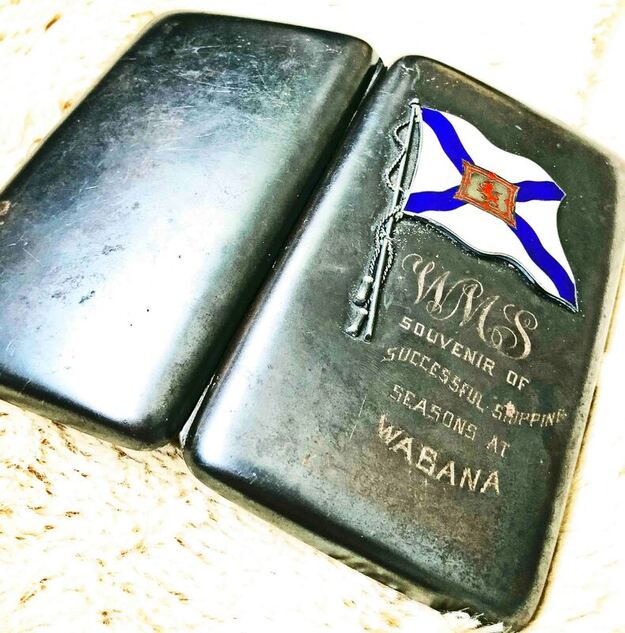 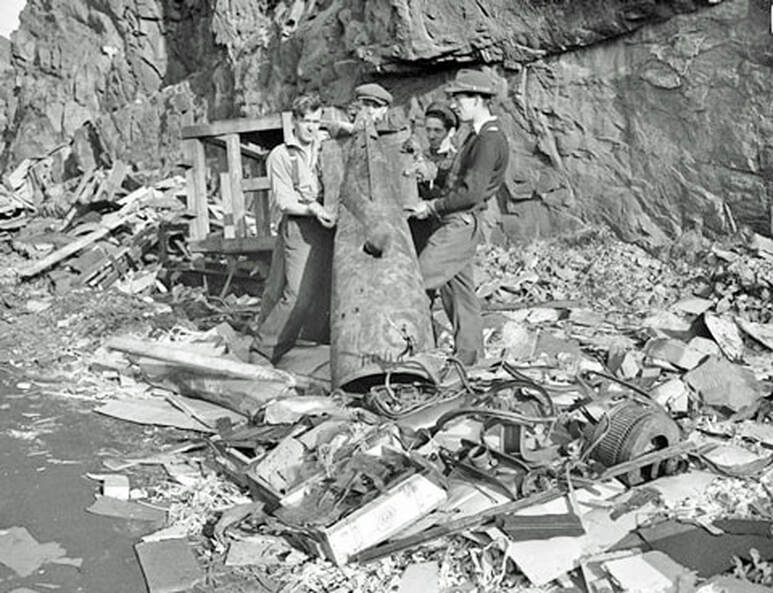 The photo above shows a piece of the torpedo that struck Scotia Pier on November 2, 1942. The torpedo was fired by German submarine U-518 at 3:30 in the morning. It was aimed at a Greek ship, the S.S. Anna T., which was at anchor off the pier, but it missed its target and hit the cliff at the pier instead. The explosion resounded throughout the Island, jolting residents from their sleep. Men in the photo: 1. Dick Foley, 2. ???, 3. ? Brown, 4. Chris Parsley. Photograph by Gerald Milne Moses, courtesy of Library and Archives Canada (PA-188854), Ottawa, Ontario.

The photo below left is of a part of the torpedo. Photo courtesy of Madison Hallingham. In the graphic on the right, part #1 seems to be the object in the left photo.
Postage Stamps
Iron ore mining on Bell Island has been celebrated at least three, and perhaps four, times on Newfoundland postage stamps. Several writers have written that the 1897 Newfoundland 5-cent stamp (pictured below) depicts miners in the Wabana Mines:

Bell Island politician and author, Steve Neary, in an April 5th, 1993 article in The Evening Telegram entitled "Stamp Issues Honored Bell Island" stated that the 1897 stamp depicted "two miners drilling in a surface pit on Bell Island." He did not state a source for this information. There are several problems with that description. The miners on the stamp seem to be working with hand tools, not drills. They also seem to be using head lamps and the surroundings look to be underground, not on the surface. The mining on Bell Island did not go underground until 1903, six years after the stamp was issued.

Historian David Frank also thought the stamp depicted mining on Bell Island. His article "The Labour Stamp: The image of the worker on Canadian postage stamps," published in the Spring 1997 issue of Labour, says of the 1897 stamp, "In the underground scene, most likely at the newly-opened iron mines of Bell Island, the men are hard at work with pick and shovel." He goes on to say that, "The mining stamp is also of wider interest as it is said to be the first stamp with a mining theme issued by any postal authority in the world."

That the 1897 stamp depicts mining on Bell Island comes into question with geologist/historian Wendy Martin's statement in her 1983 book, Once Upon a Mine. On page 14 of Chapter I, she writes, "A 5-cent stamp depicting miners at work underground in the Tilt Cove Mine. The stamp was issued in 1897 and entitled, 'Mining: One of the Colony's Resources' was the first mine-motif stamp issued in the world." She cites J.P. Drolet from an unpublished address to the Canadian Institute of Mining and Metallurgy, November 1978.

The Encyclopedia of British Empire Postage Stamps 1639-1952, V. 5: The Empire in North America gives the following description of the 5-cent stamp: "5c. Mining. Copper was discovered in Notre Dame Bay 1864. Iron Ore and lead found later." The reference to "iron ore" seems to be for Notre Dame Bay, not Bell Island.
On May 20th, 1932, J.G. Hodder, Deputy Minister of Posts and Telegraphs, visited Bell Island to take a photograph of the ore carrier S.S. Williamsplein loading iron ore at Dominion Pier. The resulting image on a 24-cent stamp (below) appeared later that year. 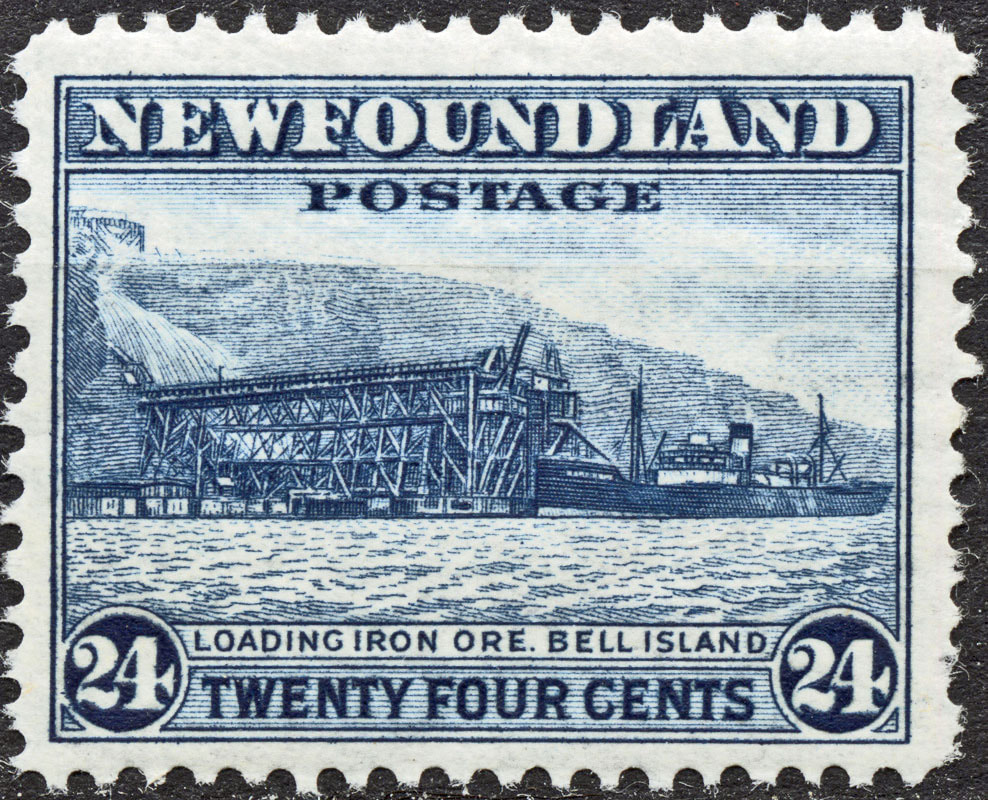 A stamp was issued in 1937 (below) to celebrate the coronation of King George VI, whose image was added to the 1932 Dominion Pier image. 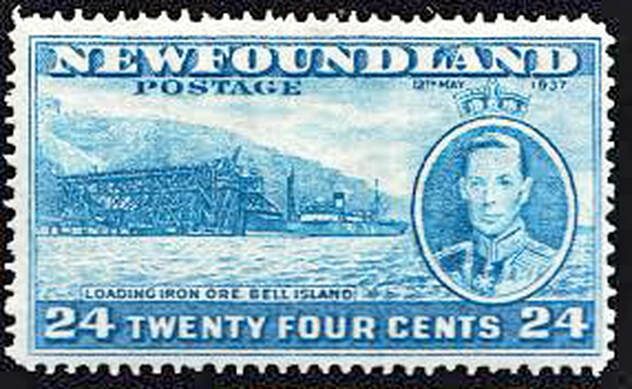 In 1941, the original 1932 stamp was re-issued without the image of King George VI.
​Currency
As with the 1897 five-cent stamp above, it is not certain which mining operation is depicted in the image below of the 1920  Newfoundland two-dollar bill. It was posted on the Facebook page for ANLA (the Association of Newfoundland and Labrador Archives) on February 25, 2020 with the caption: "The 1920 Newfoundland $2 bill features iron ore miners (presumably on Belle Isle)..." If you come across any information about this image, please get in touch at historic.wabana@gmail.com.