PHOTO GALLERY
NORTHSHOREMEN
These photos, from diverse sources which are given when known, are of the men who commuted from around Conception Bay, but mostly from the north shore, to Bell Island on a weekly basis during the mining years. Most of them did the back-breaking work of "muckers," those who shovelled the iron ore into ore cars far out under the sea.
The photo below was taken c. 1902-03. It shows two men standing next to a miner's shack in the woods. Another shack is in the shadows on the right of the photo. This photo was in an album of photographs of the Wabana mining operation in its infancy. The album was purchased for 50 cents at a flea market in Nova Scotia and was presented to the Bell Island Community Museum in 1997. 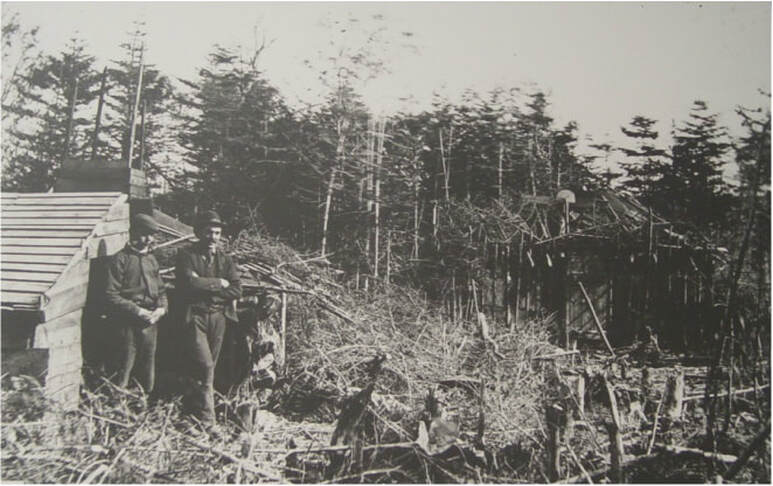 The photo below appears to be a miner's "sod house" with an opening at the top for smoke to escape. It may have been converted from its former use as a root cellar, from Bell Island's pre-mining days when farming was the major occupation. Local lore has it that there was a sod house in the area of Dominion ​No. 1 that was used as a shack by a commuting miner. It would have only had a bed and a "little pogey," as the stove was called. This photo was taken by William B. Ford, c. 1902, courtesy of Brian Rees. 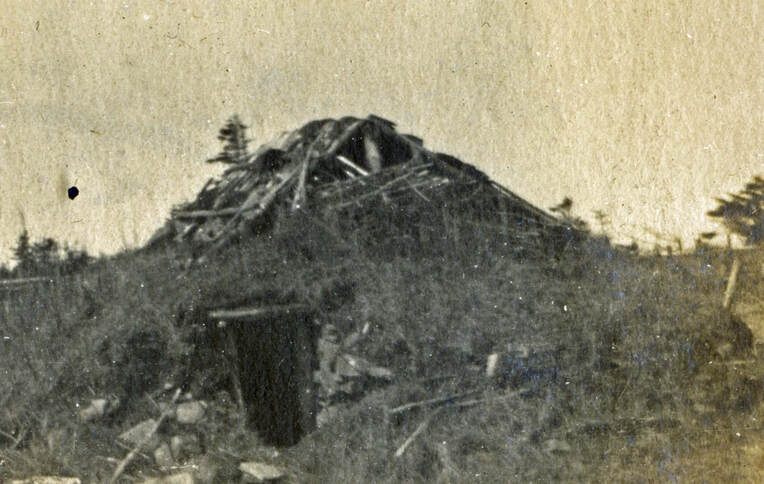 Following is an excerpt from my 1989 book, The Miners of Wabana, regarding commuting miners:
A lot of miners were not residents. Some boarded with residents, others had small shacks, while many lived in Company‑owned “mess shacks” (bunk houses) during the week. They all went home to their families around Conception Bay on weekends. The mess shacks held thirty men each, and each bunk had a mattress stuffed with hay:

The bed fleas could almost carry you away. You would be awake almost all night killing bedbugs and, oh, what a smell when you killed them.

These men were known by several names: “baymen,” “mainlandsmen,” “mainland fellers,” and “mainlanders” or, as a lot of them came from the north shore of Conception Bay, “Northshoremen.” Ironically, when their buses pulled into their home communities on the weekends, people there would say, “here come the Bell Isle men.”

When the mines worked six days a week, Friday for these men was “preparation day,” and Saturday was “rush day,” or “scravel day.” On a normal day, each pair of men hand‑loaded twenty boxes (one and one-quarter ton ore cars) of ore, and perhaps a few extra to go towards Saturday’s complement of twenty boxes. On Fridays, a special effort was made to load as many extra cars as possible in “preparation” for the next day. Then, on Saturday mornings, they often would go down into the mines earlier than usual and “rush” to finish loading enough to make up their twenty boxes for that day. As soon as that was accomplished, they could leave for home. Harold recalls a popular Bell Island story that was associated with scravel day:

An Island Cove man named Jim Adams was coming up early from the mine when he met Tommy Gray, the supervisor, who said to him, “You’re up early today.” “Yes, Old Man,” Adams answered, “I was sot (ie. planted) early.” “What happened to your buddy? Wasn’t he sot early too?” asked Mr. Gray. “Oh yes, sir,” said Adams, “but the grubs cut he off.”

The mainlanders would also load extra cars for extra pay. The men would leave the deck to enter the mines at six forty‑five a.m., get off the trams at seven and arrive at the working face, ready to start loading, at seven fifteen. In the room where they were working, there would probably be six empty cars on the siding. Each car could hold a ton and a quarter. Once those six cars were loaded, they would be pushed out and another six would be drawn in. There would be three six‑car trips to be loaded, plus two cars from the next six‑car trip. Then there would be four cars left over. Since the mainland men had nothing to look forward to when they finished work for the day, except killing time in the mess shack, they would often stay underground and load the extra four cars, getting twenty cents extra pay for each car.
The photo below is of commuting miners arriving at the Beach on a Sunday evening c.1930 after the day at home with their families on the north shore. It shows the small open boats that were commonly used for many years. Photo courtesy of A&SC, MUN Library, COLL-202: 1.12.030. 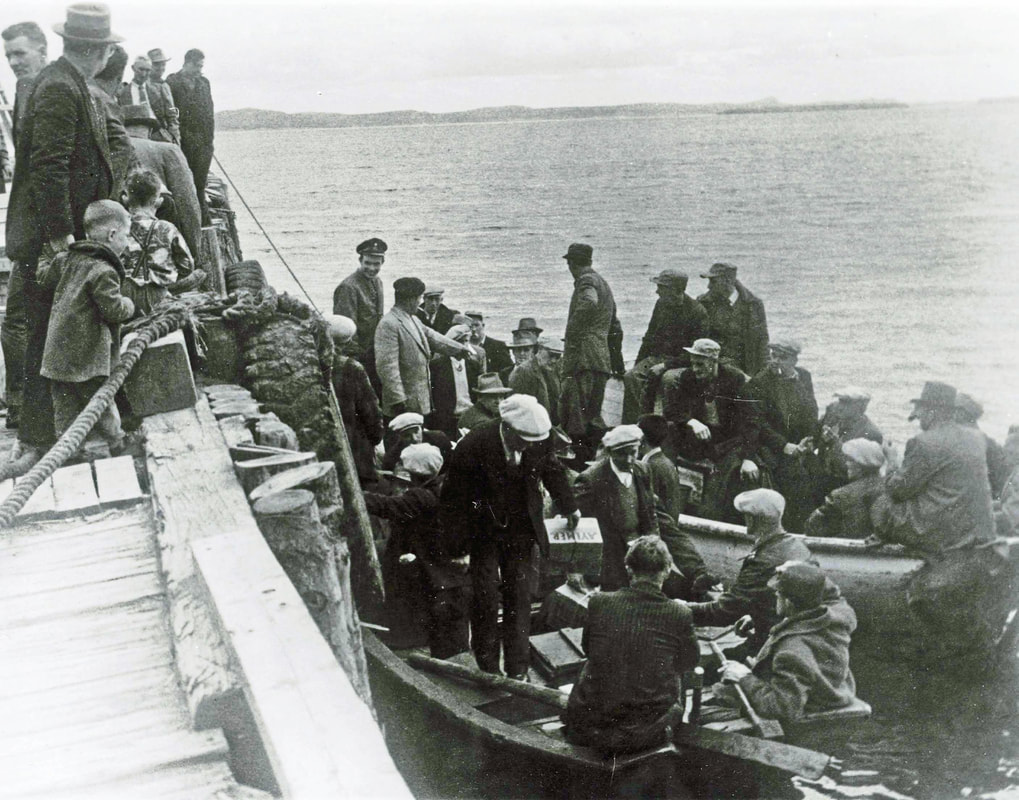 The photo below is of an open motor boat loaded down with miners leaving Upper Island Cove on their way back to Bell Island for another week of work. Photo courtesy of Douglas Hussey from his grandfather, miner Leander Hussey. 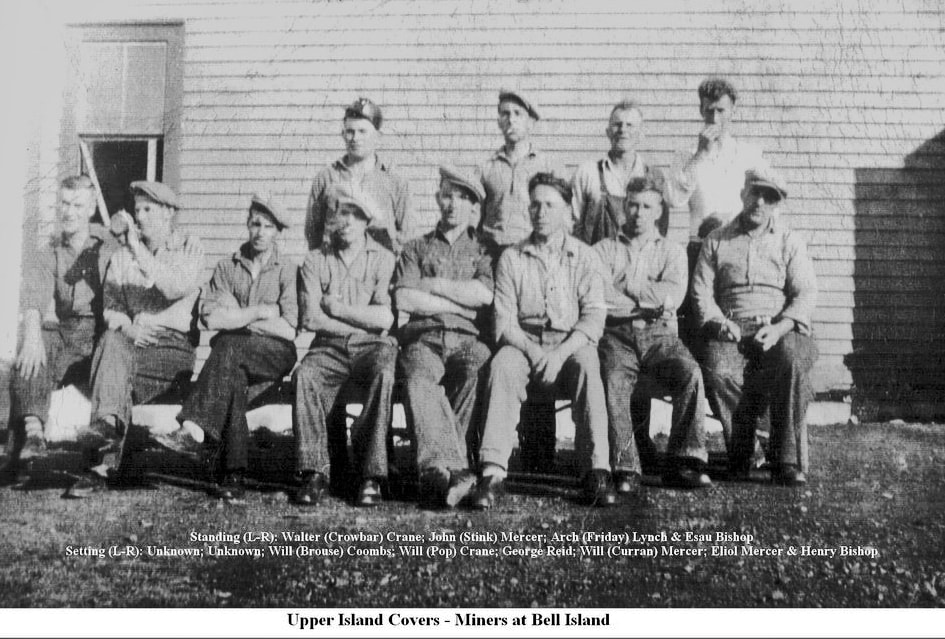 The photo below is of a group of "bunk house men" from the North Shore including William Rose looking out the window, c.1930s. Photo courtesy of Yvonne Saunders-Sinnott. 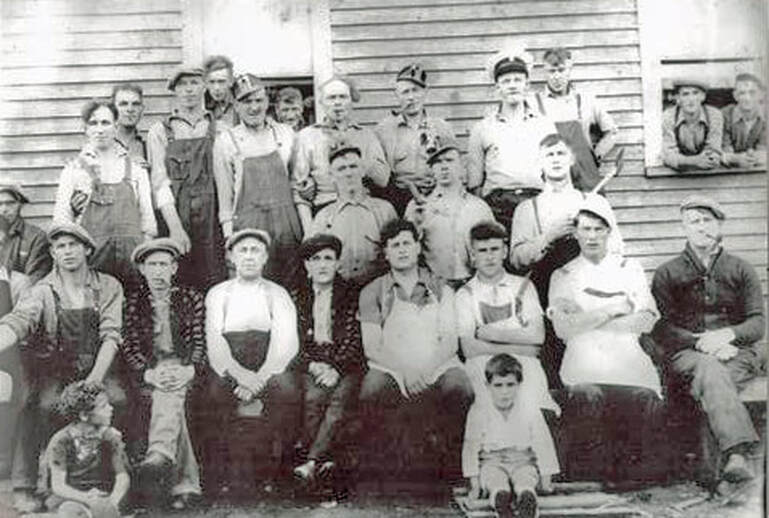