​Labour Day, the first Monday in September. Labour Day has been a statutory holiday in Canada since 1894. We were not part of Canada then, of course, but some industrialized towns in Newfoundland began celebrating Labour Day early in the 20th Century. Grand Falls held its first Labour Day parade in 1918. From 1920 onward, parades were held in some towns the last Monday of July. At some point, the holiday in Newfoundland was moved to the first Monday in September to align with the Canadian tradition. For Bell Island, the move may have been spurred by the forming of the Wabana Mine Workers' Union in 1941.

In my research of the holiday on Bell Island, the first mention I have found of it in the media is in a September 9, 1942 item in the Daily News that came from the local weekly paper, The Bell Islander, which read, "Prior to Labour Day celebrations, a special appeal was made to all Union members by the Secretary-Treasurer, G.J. Robbins, on behalf of the Executive for all men to turn out for work on Thursday after Sports Day."

Below is the earliest photograph I have found that is specifically identified as being of the Bell Island Labour Day Parade. It is of the Safety Committee's Float in the 1947 Labour Day Parade. ​Written on the back of the photo was, "snap of float - parade on Bell Island 1947."  Gordon (Rocky) Highmore is standing at the cab door. Information from Charlie Bown, 1990. Photo courtesy of A&SC, MUN Library: Coll-202, #1.08.001. 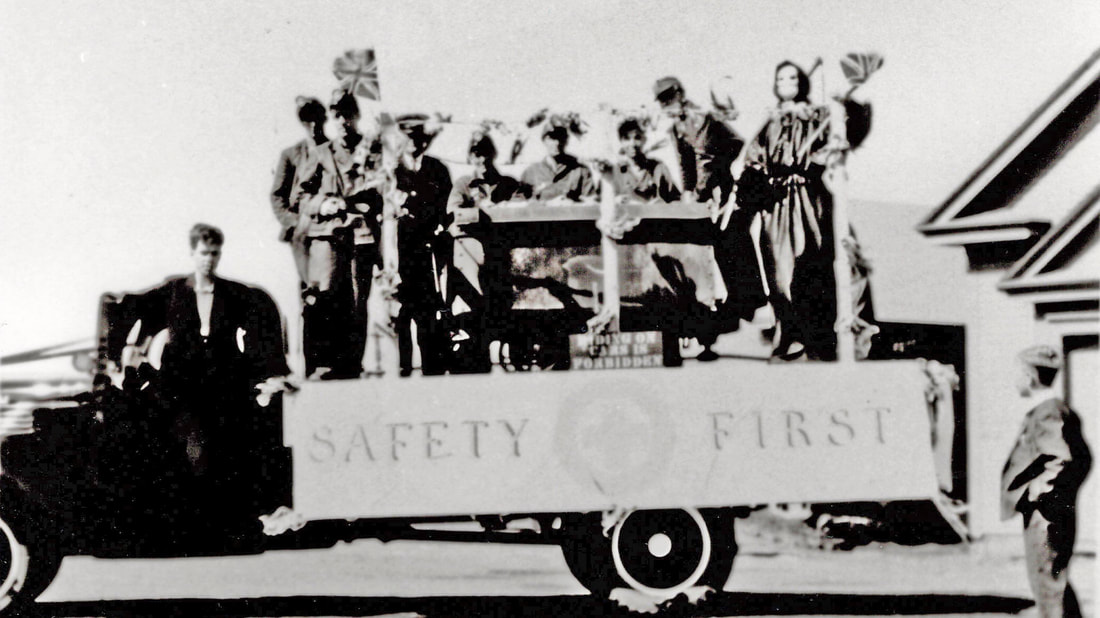 ​The photo below is probably of an earlier parade, perhaps in the 1930s, considering the float is horse-drawn. The location is the intersection of Greenwood Avenue with the East Track (now Steve Neary Blvd). The houses in the background were 3 large 2 1/2-storey Company staff family houses facing north on Greenwood. The float is near the water tower at the NE corner of the Sports Field, just behind the DOSCO Main Office. On the float is a small rock car with flap doors on the sides for the waste rock to fall out at the rockpile. Is that a drill at the back of the float? If you can provide any information about this photo, please get in touch at: historic.wabana@gmail.com. This photo was posted to If You Grew Up on Bell Island Facebook Group by Kelly Babb.

​From descriptions of the main Tug-o-War competition over the five years the Company magazine, Submarine Miner, covered it, it seems that the Labour Day Sports Field events had been going on for a number of years, but the magazine gave no actual history of Labour Day celebrations, and there was no mention of a parade being held.

The Labour Day Sports Field events were organized jointly by the Sports Committee of Local 4121 of the Miners' Union and the Lions Club. The main sporting attraction each year was the Tug-O-War event between various mines and mine departments. Other sporting events held included the usual track and field sports plus youth baseball games. Side attractions included games of chance, ticket spins, cotton candy and other food stalls.
The articles below regarding Labour Day celebrations on Bell Island are from the Submarine Miner from 1954 to 1958. First is ​Labour Day, September 6, 1954 from the Submarine Miner, V. 1, No. 4, p. 6. 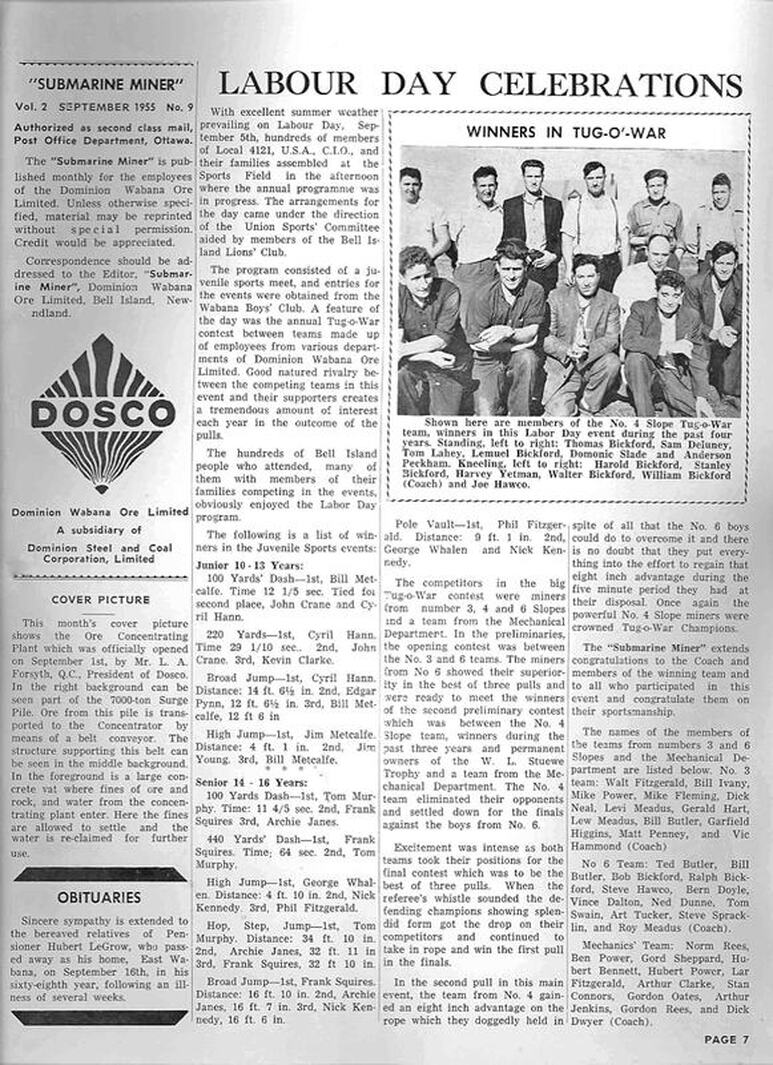 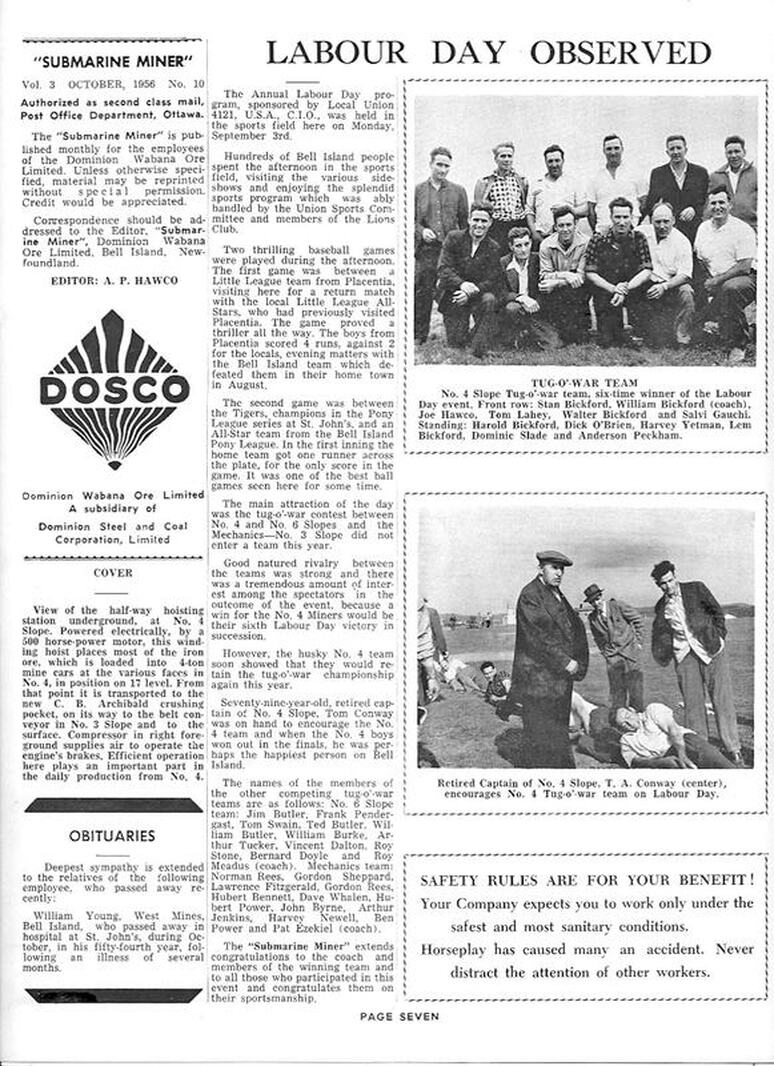 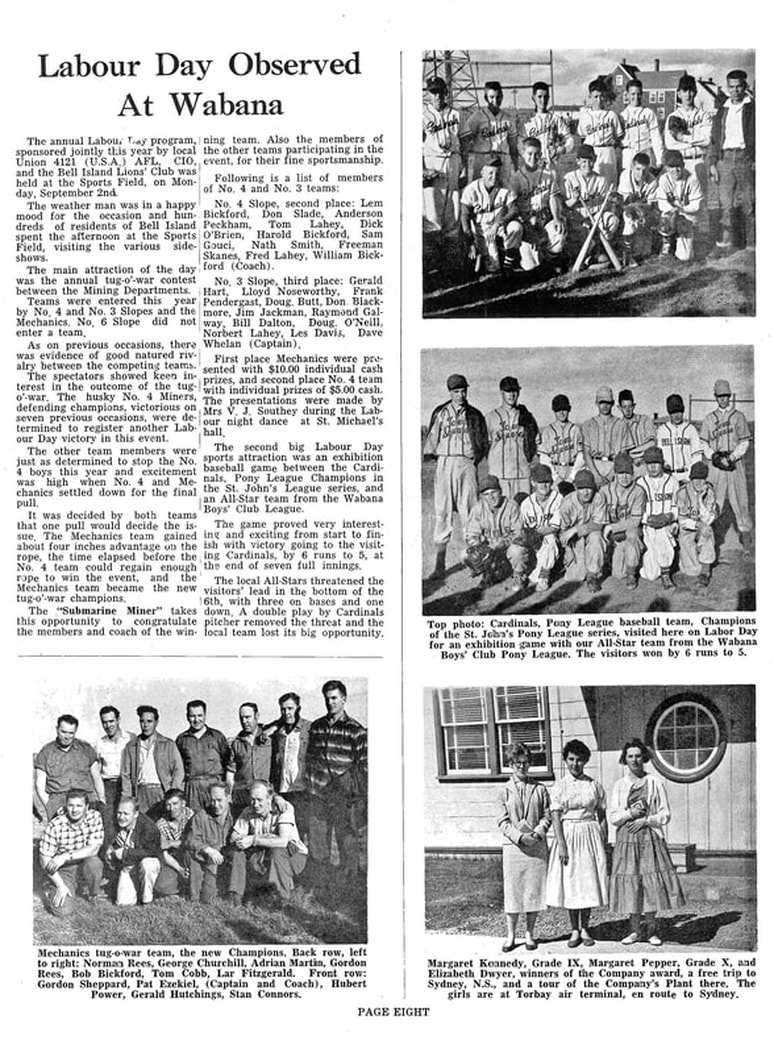 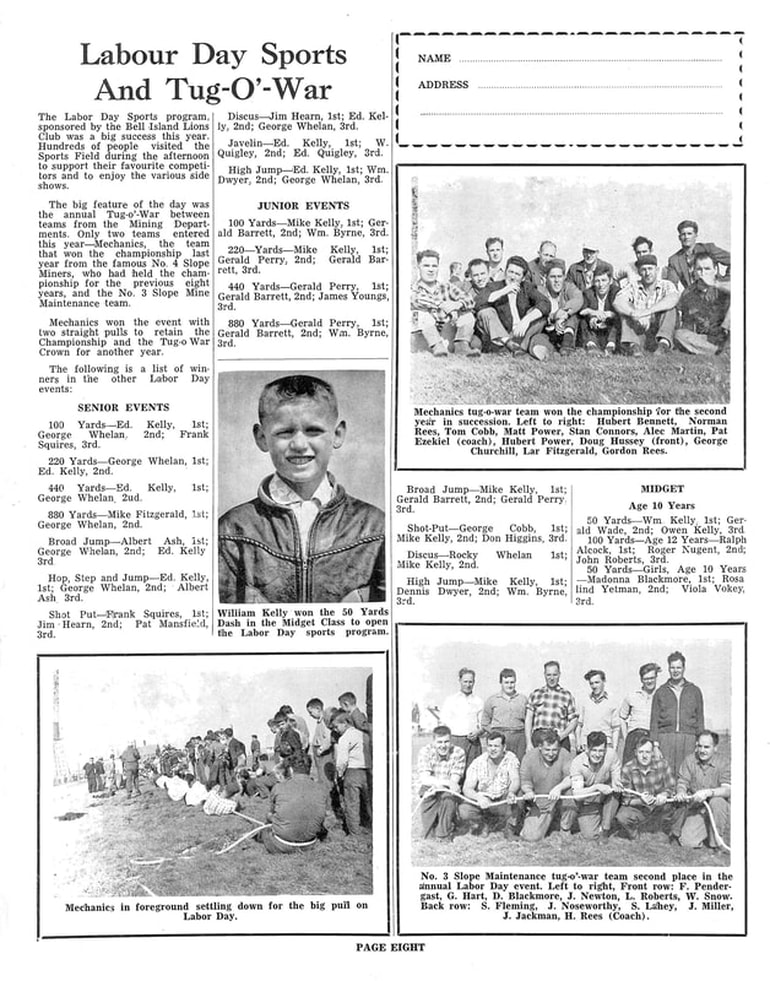 The photo below is from the December 31, 1960 year-end review of the Daily News and shows a mine company float from the Labour Day parade that year. The sign on the side of the truck has the DOSCO symbol and the words: "Iron, Limestone, Coal and Steel." 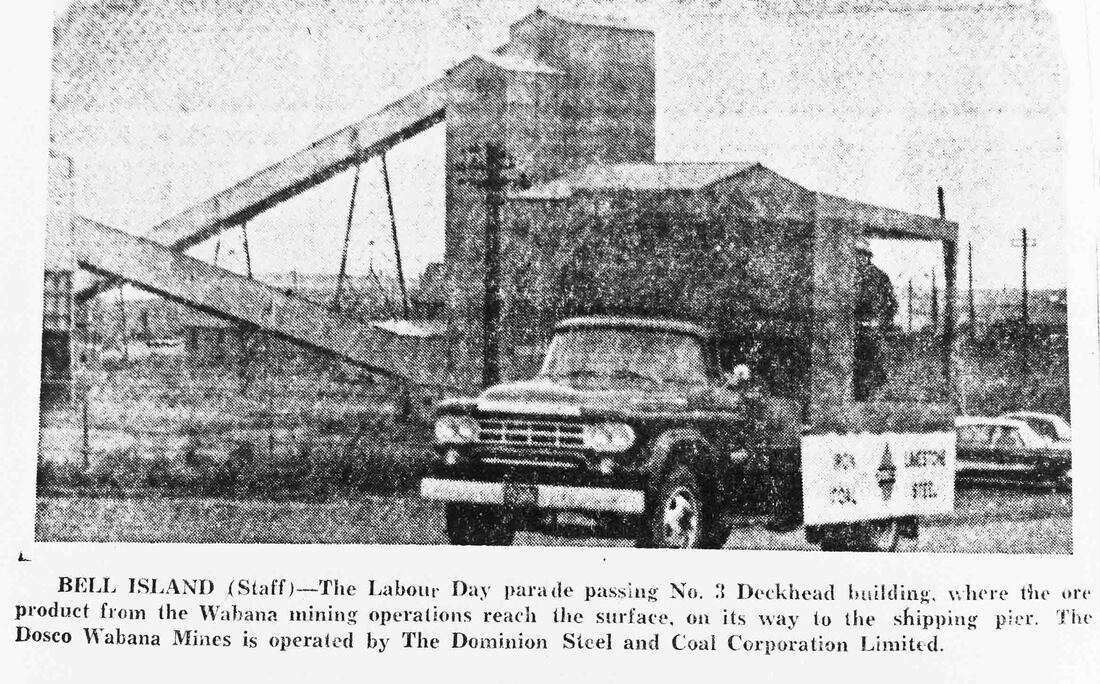 The photo below, courtesy of Brian Burke, is of the Dominion Wabana Volunteer Fire Brigade with their new truck in the 1960 Labour Day Parade. 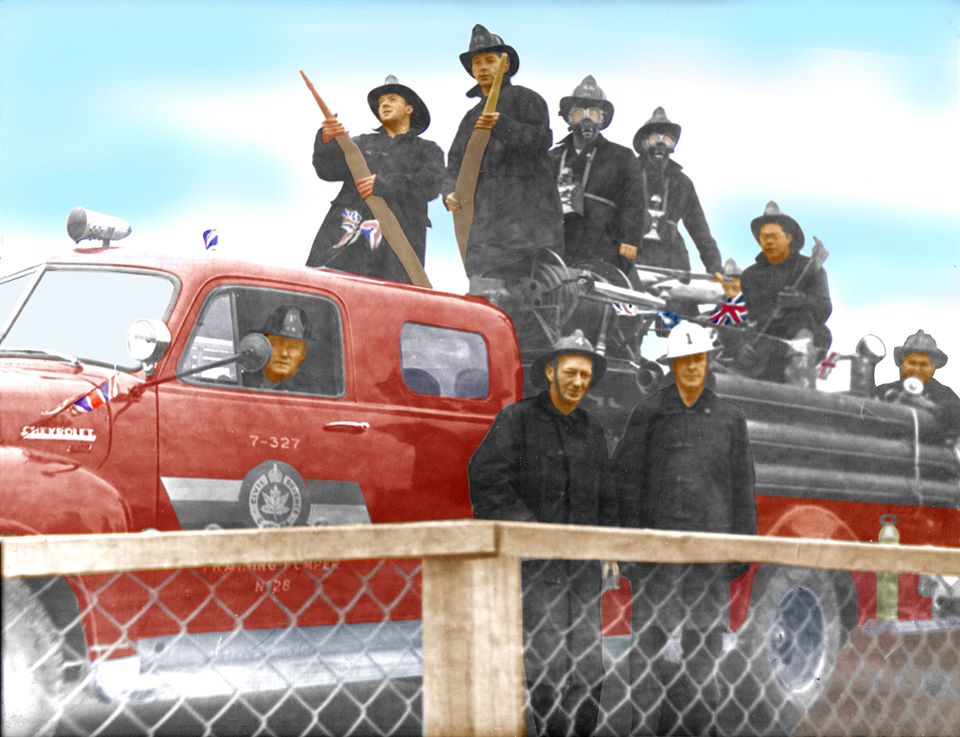 The photo below of a parade going past Joe Pynn's Store at "Pynn's Corner," on the northwest corner of Main Street at Memorial Street, probably sometime in the 1950s, is courtesy of Gerald Purcell. It is likely a part of the Labour Day parade. ​If you have any information about this photo, you can get in touch at: historic.wabana@gmail.com. 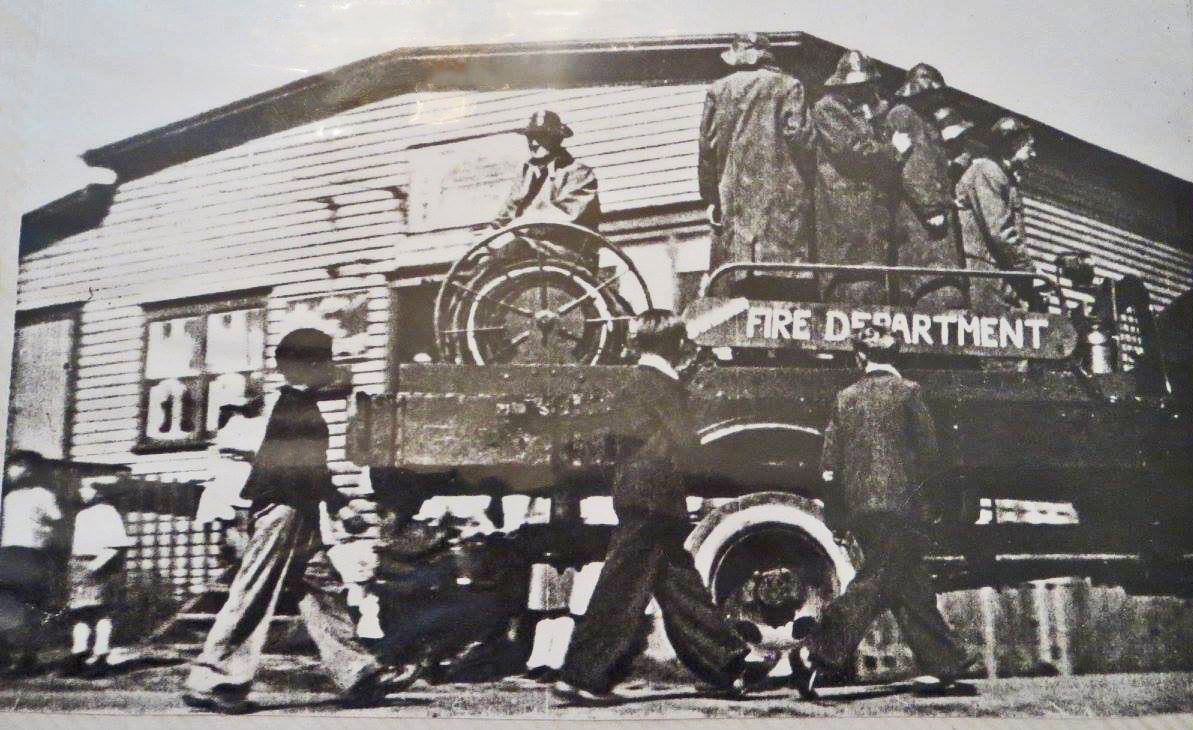