Buses, trucks and cars on Town Square in the early 1950s. Photo courtesy of Sonia Neary Harvey.
​When Harold Kitchen moved to Bell Island with his family in 1922, there were only three motor cars on Bell Island and no trucks. September 1924 was the first time motor cars on Bell Island were mentioned in the media when four men were named in The Daily News as being the owners of new cars: Dr. H.A. Giovannetti, James Flynn, Harold Harvey and Nicholas Fowler. The number of cars had risen to 23 by 1925. There were 30 cars by 1927, and 10 miles of road. Driving licenses were issued by Acting Sergeant Levi Shepherd. The driving test consisted of the successful completion of a figure 8. Ferries at that time were not fitted to carry cars. For a fee of $10 (about $145.00 in 2019 money), a car would be carried one way as freight.

Automobiles were such a rarity in 1928 that it was noted in a spring issue of the St. John's Daily News that there was a local Motor Association on Bell Island with elected officers, most of whom were local dignitaries. C.B. Archibald, the manager of Wabana Mines, was president; Angus MacDonald was vice-president; D.A. Fraser was treasurer; and John Cramm was secretary. There was a Road Management Committee consisting of P. Kent, T.F. Neary, J.B. Petrie, and Dr. H.A. Giovannetti.

Much dissatisfaction existed among the Island's 40 car owners over the fact that license fees were going to St. John's instead of being spent on local roads. It was also noted that Miss Annie Murphy was the first licensed woman driver on Bell Island. The first car from the local mainland to visit Bell Island came over in June 1928 and was driven by Sandy Morris, a salesman. At that time in Newfoundland, there were 1453 cars, 197 trucks and 65 cycles registered.

Probably the best known car on Bell Island was a 1927 Whippet owned by Edward (Ned) Kent of Lance Cove. He bought it for $1,200 in April 1928 from car dealer T.A. MacNab, Water Street, St. John's. Mr. Kent was still driving his Whippet in 1991 and had never had a breakdown in those 64 years. (See photo of mural below.)

In August 1929, 56 cars, 9 trucks and one motorcycle were registered on Bell Island.

In September 1930, the first stop signs were erected at intersections.

The first small car to make its appearance on the Island, a Baby Austin, arrived at the end of March 1931. It was owned by Dr. H.A. Giovannetti. Motor registrations from the Island that year showed a total of 69 cars, 16 trucks and one motor cycle. On April 1st, roads on Bell Island were placed for the first time under the direct supervision of the Highroads Commission by order of the Governor-in-Council. A few days later, R.H.K. Cochins, engineer in charge of the highroads, and J.A. Homer of the Department of Public Works visited the Island with J.M. Greene, MHA, to make arrangements for extensive repairs to 20 miles of roads.

A bus service was inaugurated on Bell Island in 1947, according to a year-end report on "Transportation" on Bell Island in the Daily News, December 31, 1948, p. 68. (Several buses can be seen in the photo of Town Square in the early 1950s at the top of this page.) The report says:

The bus service...came into its own during the past year [1948], largely as a result of the coming of the Furey buses from the mainland [of Newfoundland]. Later, a number of these buses and station wagons were acquired by a locally-formed company which is carrying on a regular service. There are also a number of privately owned buses which are getting their share of trade. It is a question for debate as to whether it would be better for one concern to hold a franchise for bus operation, or for a number of operators to be supplying the public needs. At the moment, the question does not arise as Bell Island is not yet incorporated as a town. It is, however, a matter of record that the bus system has become very popular on the island now that the public has become accustomed to them. They are supplying a regular service at a low cost to all sections of the Island, running on a regular schedule unhampered to date by winter conditions, and have proved a particular boon to people in the outlying sections who are thereby enabled to commute to and from their work in comfort and with speed, and also spend their leisure hours at the Island's amusement centres, or engage in shopping in the business areas.

Until 1947, motor vehicles in Newfoundland travelled on the left side of the road, as in England. According to the Encyclopedia of Newfoundland & Labrador, in its article on "Motor Vehicles,"
the switch to driving on the right was due to the presence of Canadian & American military vehicles in St. John's during WWII: "In 1942, in part to accommodate the military, vehicles began travelling on the right side of the road on parts of the Avalon Peninsula, and particularly in St. John's. Right-hand drive was adopted for the entire country [of Nfld] on January 2, 1947." 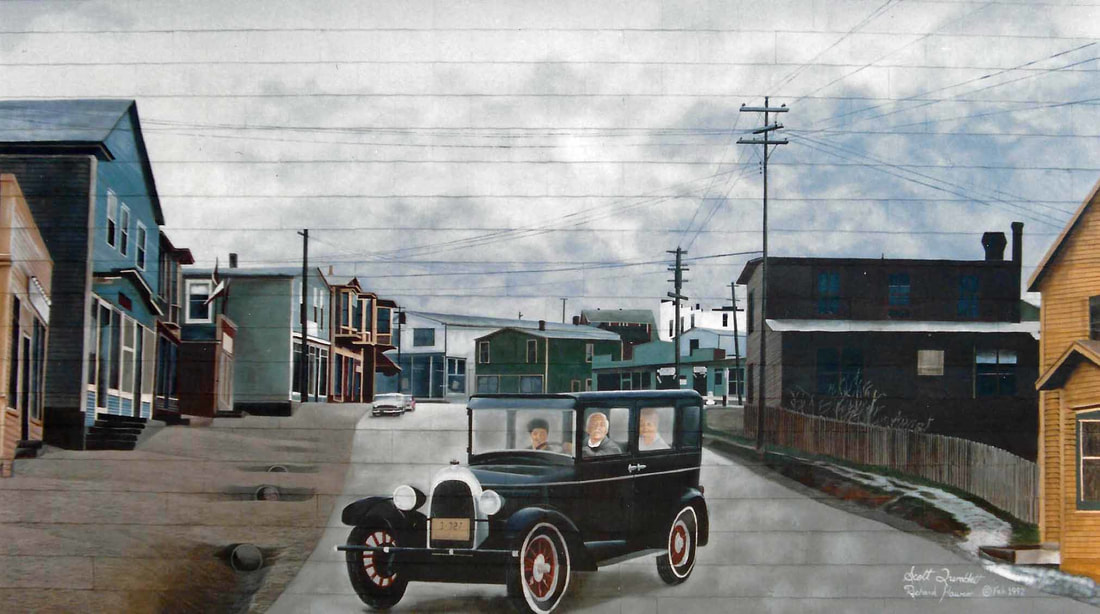 The photo above is of the 1992 mural entitled "Town Square" located on the north wall of the Loyal Orange Lodge on Main Street. It shows the lower end of Town Square in 1961. Front and center in the mural is the 1927 Whippet with Ned Kent at the wheel. Below is a photo of the Whippet in the Kent garden, Lance Cove Road.