More information needed on this topic:

If you have information, photos or clippings of the Wabana Little Theatre or the Wabana Glee Club, please get in touch at historic.wabana@gmail.com.
WABANA LITTLE THEATRE
​1959-c.1966

The Wabana Little Theatre troupe was formed in the Spring of 1959 by Ron Emery of South Africa, who came to Bell Island that year to serve as Electrical Superintendent with Dominion Wabana Ore Ltd. "Little theatre" groups were active in major centers throughout Newfoundland at this time. They would rehearse and perform plays in their home towns with the intention of entering their plays in the provincial Dominion Drama Festival held every spring.

Starting with 5 members in 1959, the cast and crew of Wabana Little Theatre numbered 40 by 1961. The troupe first called themselves the St. James Drama Group because they were using St. James Hall in the basement of St. Pat's Theatre, but changed the name to Wabana Little Theatre before their first performance. Mary and Ron Emery would host play readings/rehearsals at their house at the beginning, but eventually rehearsals would take place in church halls, classrooms, the Union Hall, whatever was available when needed.

Ron Emery left Bell Island in the winter of 1962, shortly after forming the Wabana Glee Club associated with the theatre troupe. An item in the Wabana Star of January 10, 1962 under the heading, "Glee Club Practice Tonite," stated:

"The Bell Island Glee Club will resume its weekly practices tonight, Jan. 10th, at 8 p.m. in St. James Hall. The Club is under the direction of Mr. Wallace Dawe, Director of Music at St. Boniface Regional High School. There is still room in the approximately 60-member glee club for tenor and baritone voices. Anyone interested in joining the group is invited to come along to the practice."

It is not clear how long the Glee Club lasted. It is believed that the Little Theatre produced a few plays a year until the mines closed in 1966, when the members dispersed to other communities for employment.

When I interviewed Eileen Dicks in 1992 about her involvement with the troupe, she had this to say about the stage at St. James Hall:

"There was no such thing as having any money to work with. It was only a bare hall and stage, just as stark and plain as could be. There were never any entrances and exits that you could work with, but we had fun doing it; there's no doubt about it."

"We'd rehearse in cold church halls. I don't suppose we ever made much money. You might make enough to buy more play books to do another one. That's about the way it worked."

She recalled rehearsing in the Union Hall on Bennett Street, especially one occasion when it was cold outside and inside the building because something had gone wrong with the heating system. They rehearsed in their overcoats and winter boots and stayed at it until they could not stand it any longer. One of the women told her the next day that she had been so cold, when she got home she had to take a hot bath to warm up.

Some of the plays they produced were:

"The Day After Forever"
c. May 11-16, 1959
This is the first production of the Wabana Little Theatre, shortly after their formation in the spring of 1959. The newspaper clipping in 2 parts below was published in the Evening Telegram, April 21, 1959, and tells the story of their beginning. Clippings courtesy of Eileen Kavanagh. 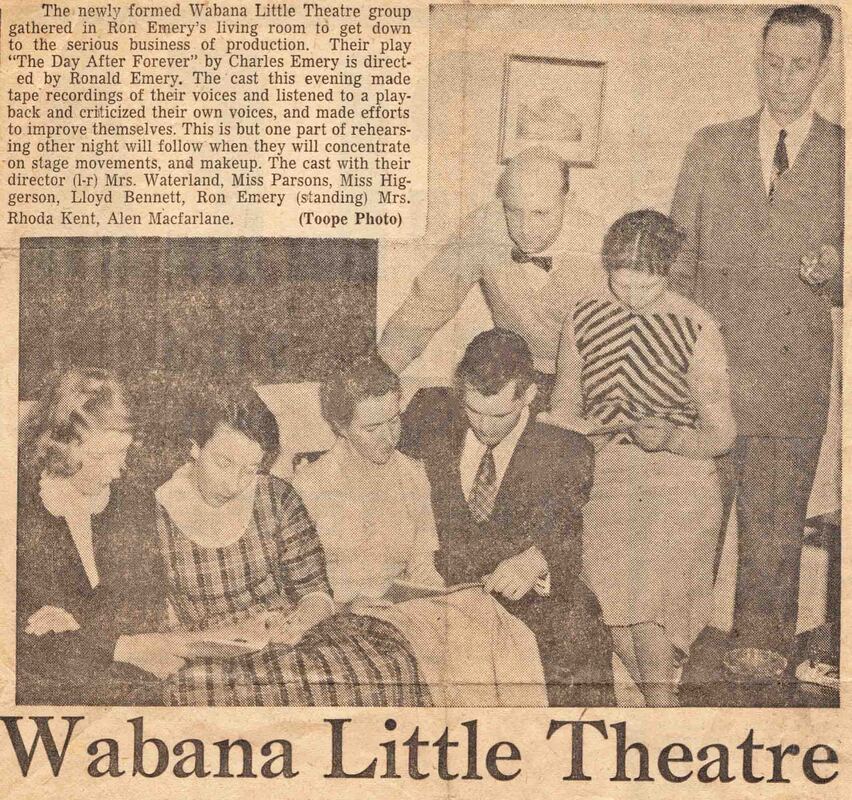 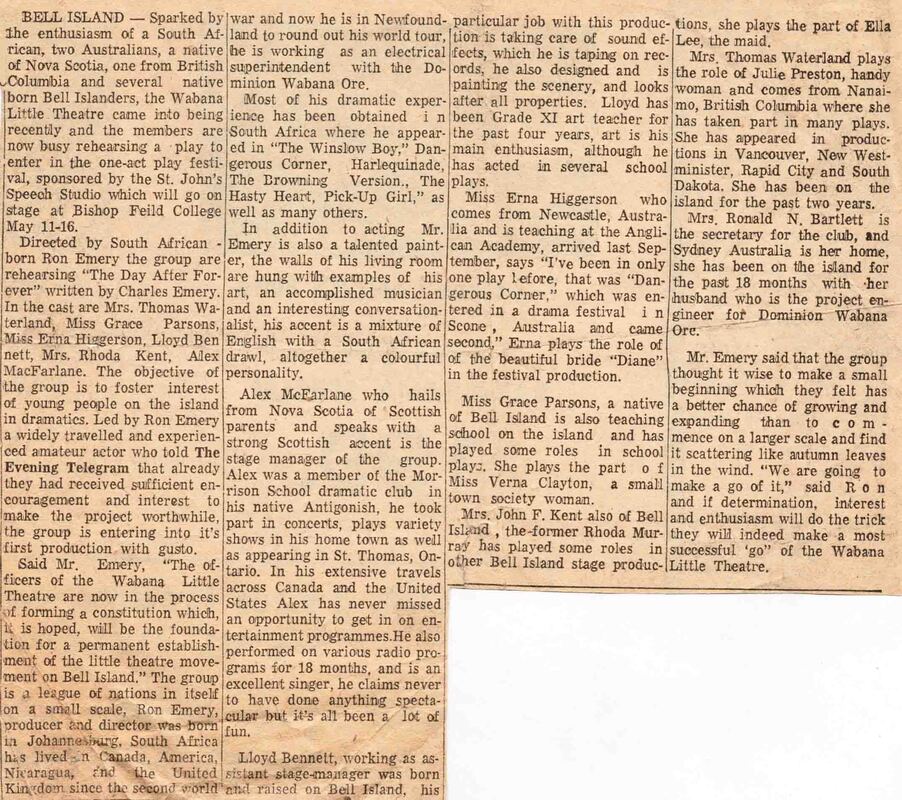 The clipping below, c. May 16, 1959, gives the results of the One-Act Play Festival, which ran May 11-16, 1959 at Bishop Field College in St. John's, with praise for Wabana Little Theatre's performance of their first production, "The Day After Forever." 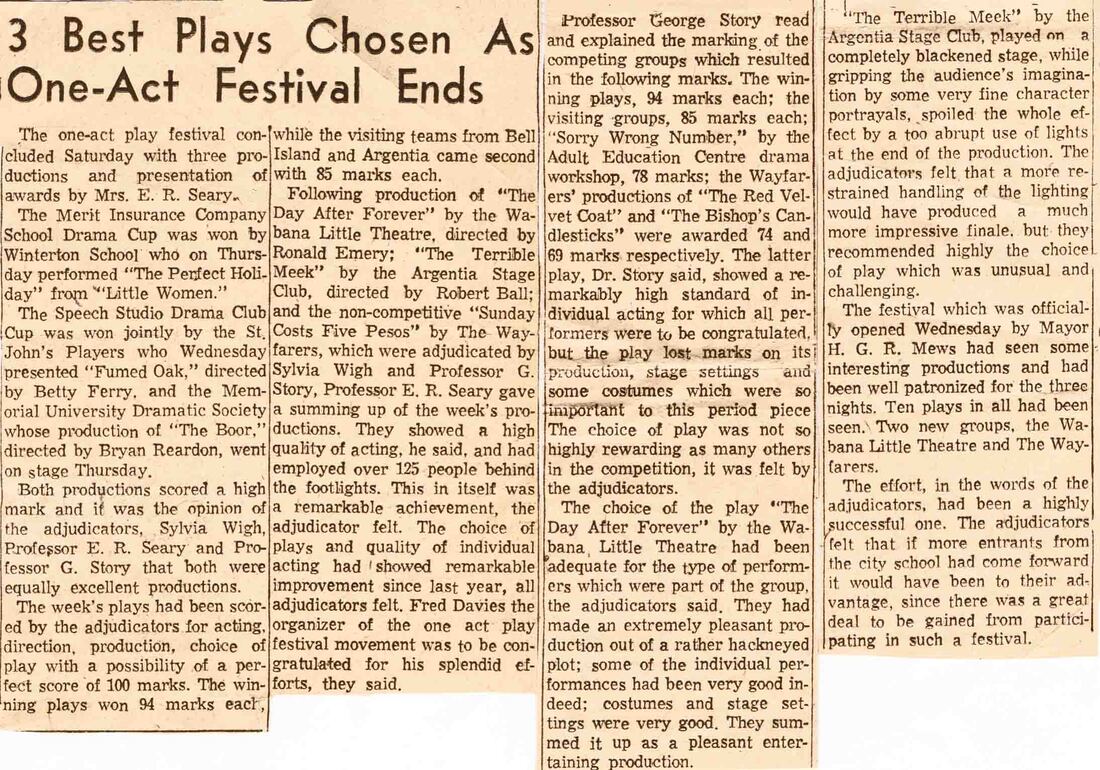 Following the One-Act Play Festival, the Bell Island Lions' Club sponsored the Wabana Little Theatre and the St. John's Players in a presentation of their festival entries at St. James Hall. The Lions' Club hosted a dinner for the participants prior to the performances, and afterwards they were guests at the home of Ron Emery, before getting the ferry back to Portugal Cove at midnight. Those in the photo below are identified at the end of the late May 1959 newspaper clipping. 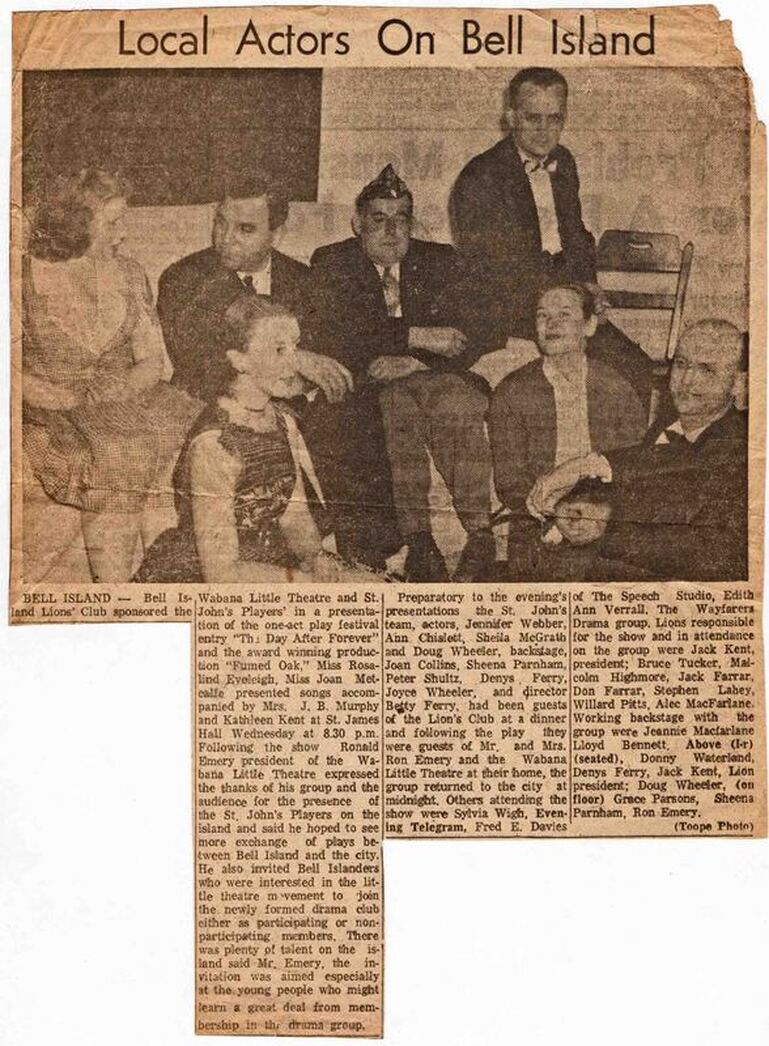 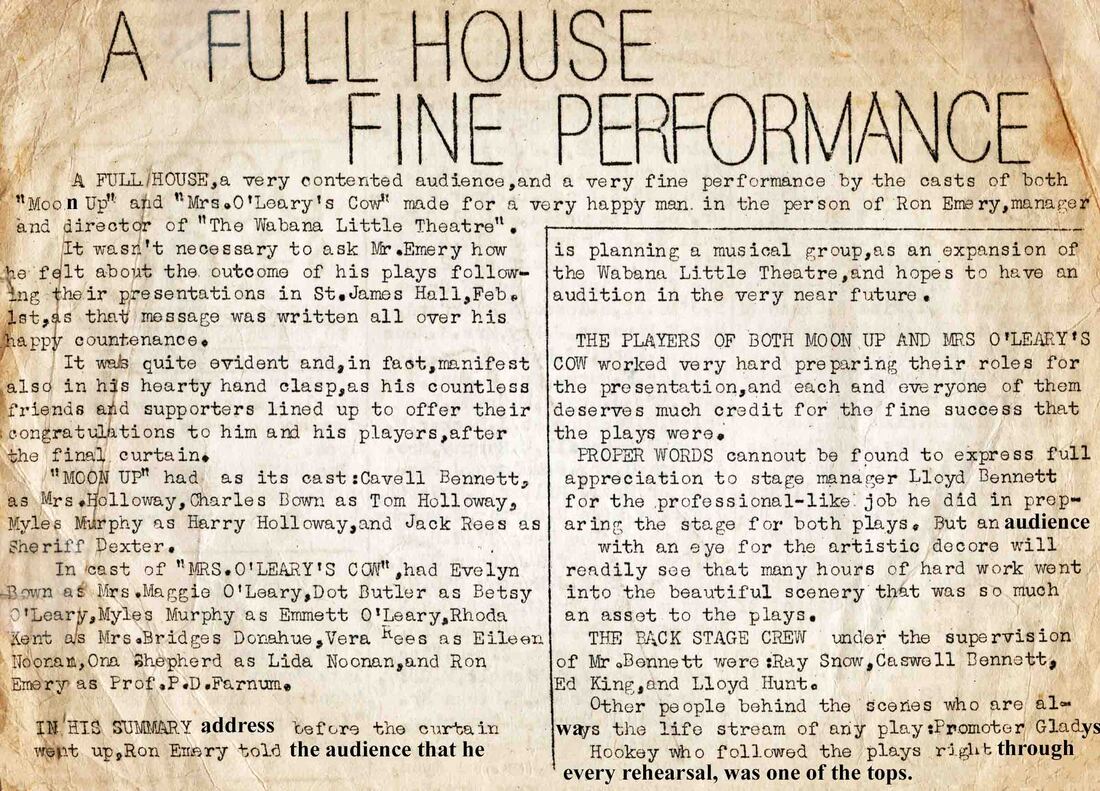 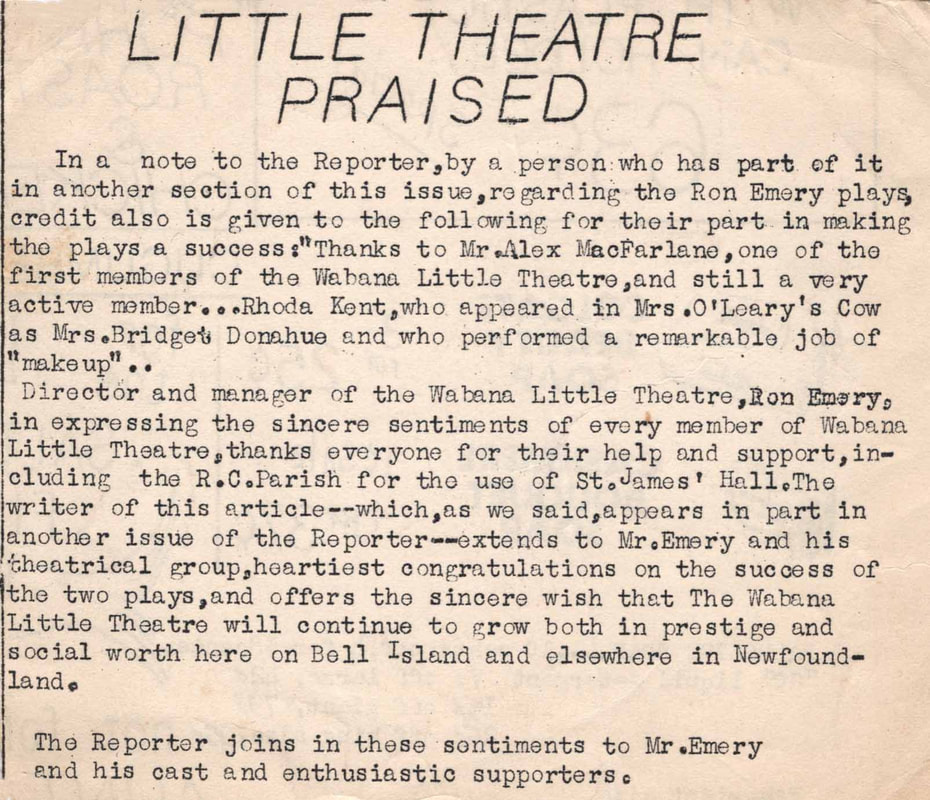 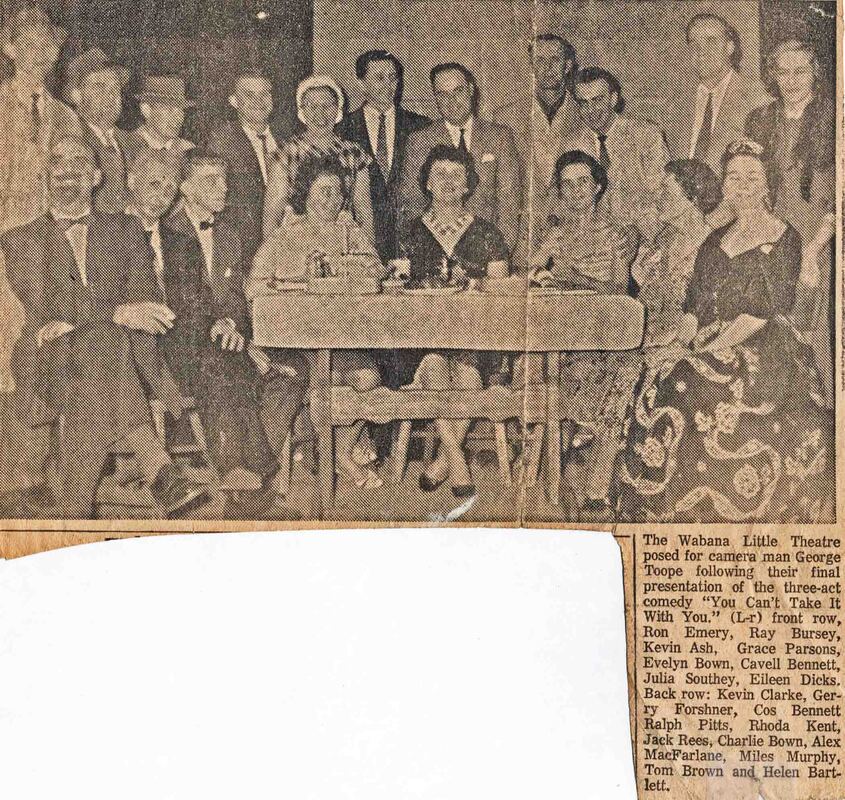 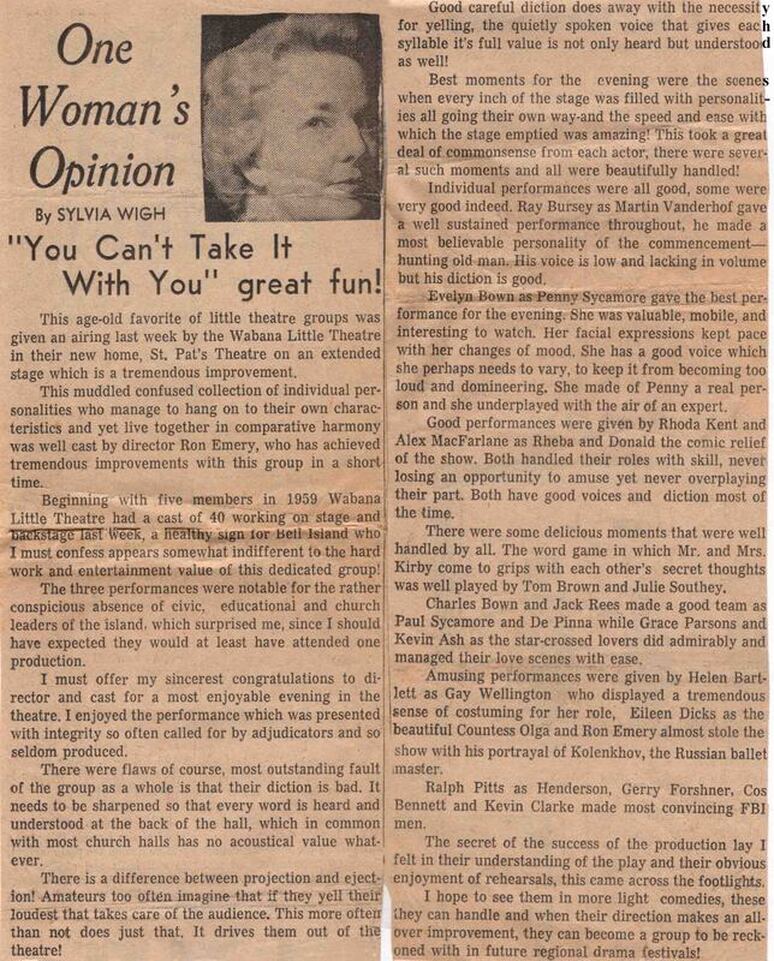 In describing the props and stage decoration for the show, Eileen Dicks said:

We didn't have any money so we made the magic box of the jewels out of dynamite boxes. We covered them with something and put some necklaces and beads and stuff in. We had Christmas tree lights in the box so that they would all glow and then out would come these sparkles. The back of the stage was supposed to be the jewel cave. We had Scotch tape stuck all over the back because it would sort of sparkle. But it was terrible, when you think about it; it was awful, but we all had fun. 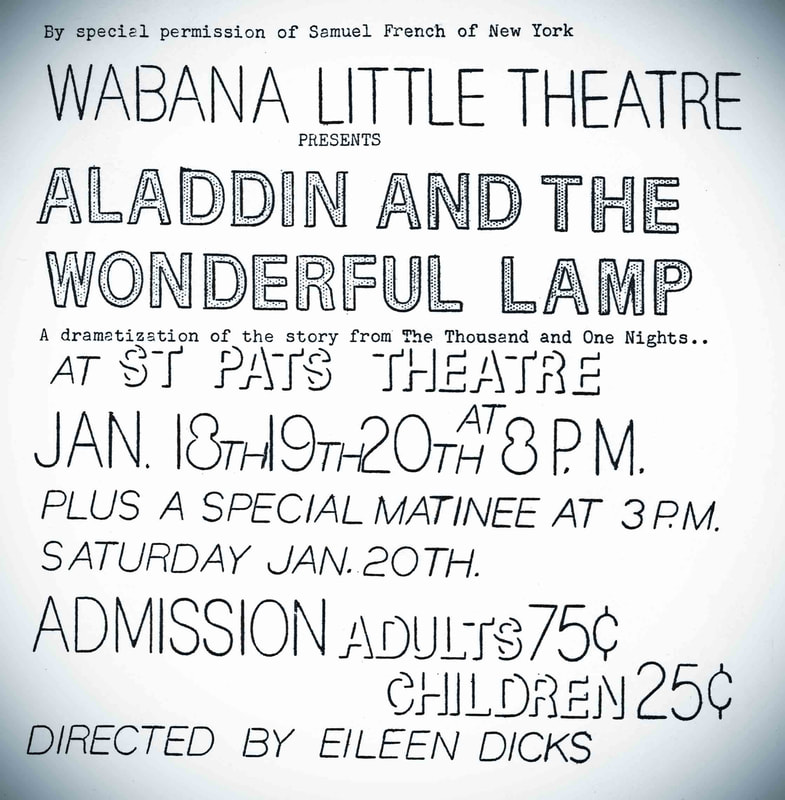