The mining company on Bell Island constructed dams to supply water for their industrial needs, but information about them is scarce. There were also small bodies of water near the mining operations that were formed by the ground water that was constantly being pumped from the mines. One person commented about the ponds near the mine yards, "We used to call them dams; the water in them was pumped from the mines and was muddy red." On this page, I will post photos and information about these dams and water bodies, most of which was found in the DOSCO magazine, the Submarine Miner, and posts made by Facebook Group members.
WEST DAM (UPPER DAM) & LOWER DAM
Located at the center of Bell Island is what we know as the West Dam. According to the January 1955 issue of the Submarine Miner​, p. 4, below, it was created by the mining company in 1954 and completed in November of that year. (Locals say that prior to being dammed, it was known as Wild Duck Pond.) The plan in 1954 was to create another three or four dams in different locations on Bell Island in order to help conserve water that was naturally flowing over the cliffs into the ocean. The West Dam was constructed by the mining company to provide a supply of water for fire lines, dry houses, hoists, etc. in the mining industry. It was also hoped that it would help retain a natural supply of water in the ground that would prevent private wells from going dry as had happened in previous years. 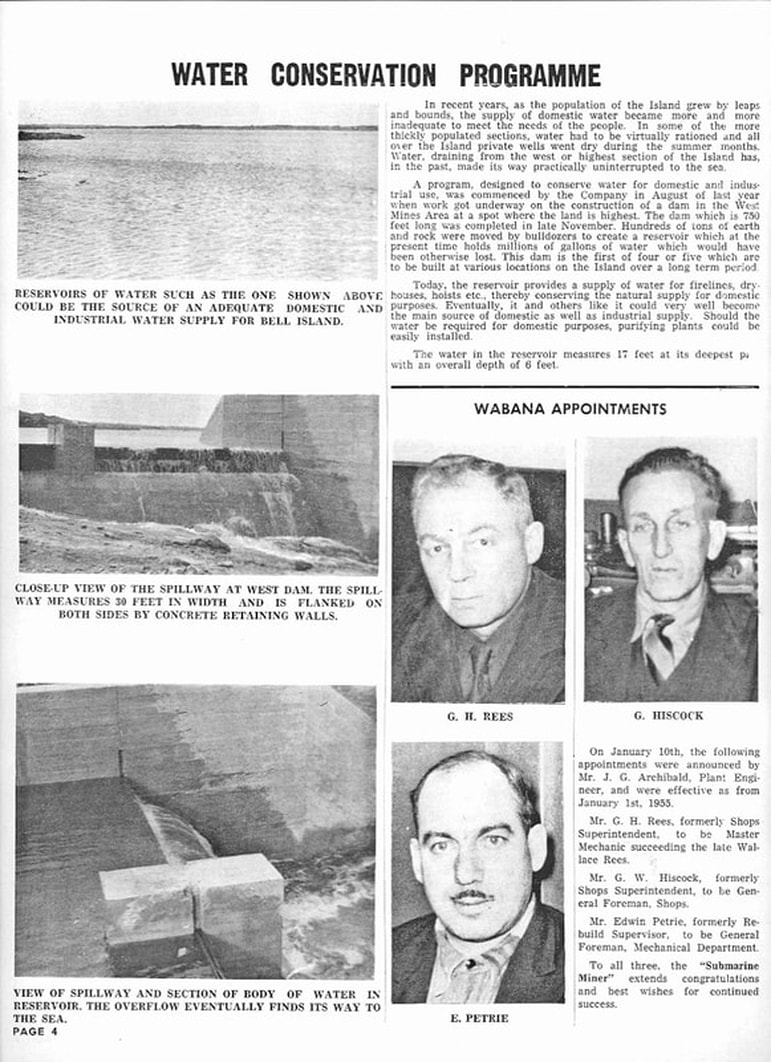 But, it seems that the creation of the West Dam in 1954 was not the first time that the mining company made use of this body of water. Below is an early 1900s map of Bell Island. "Scotia Road" is marked on this map as "N.S.S.&C.Co. (Nova Scotia Steel and Coal Co.) Tramway." What we now know as "West Dam" is called "N.S.S.&C.Co. Upper Dam" on this map. Main Brook is not named, but it is clearly marked and you can see it running into the Upper Dam, then along to the Lower Dam and from there east to Freshwater Cove. So, in spite of what was reported in the Submarine Miner above, it seems that the West Dam, albeit not by that name, and also the "Lower Dam," were in use by the Scotia Company probably from the beginning of mining operations in 1895.
Source:  The Rooms Provincial Archives, Bell Island Map Collection, MG19 B-58 334.

The month of August brought the fine summer weather, especially during the last two weeks of the month. During that period, we enjoyed continuous days of sunshine. Employees and members of their families took advantage of every opportunity to enjoy those fine days out of doors. The West Dam, located near West Mines, in a country section of Bell Island, is now a favourite bathing and picnic spot for Bell Islanders. At the site of the old dam, which will be remembered by former Bell Islanders, a water reservoir to conserve water, which previously drained from the Island, into the sea, was constructed by the Company in 1954. Although the water from the reservoir is not used directly for a domestic supply, it is used for fire lines and industrial use. It also created a natural supply of water in the ground, which prevents wells from going dry as in previous years. It was to this spot that hundreds of people came daily to bathe and relax in the sunshine during the past summer.

In the c. August 1956 photo below, the Hussey family were enjoying a Sunday afternoon on the rocky northern shore of the West Dam, as were other families seen in the background to the east. Swimming on this north side of the pond was not ideal as the rocks were slimy and pointy, slippery to walk over and painful for bare feet. I suspect it was the preferred side for the owners of cars because they were able to drive along the shore and park on this side, which they could not do on the south side. Most roads on Bell Island were still gravel at this time and cars would get coated in dust. Domestic water supplies were too precious to waste cleaning a car, so drivers took the opportunity to wash their cars while the children played in the water.  (Source: Gail Hussey-Weir) 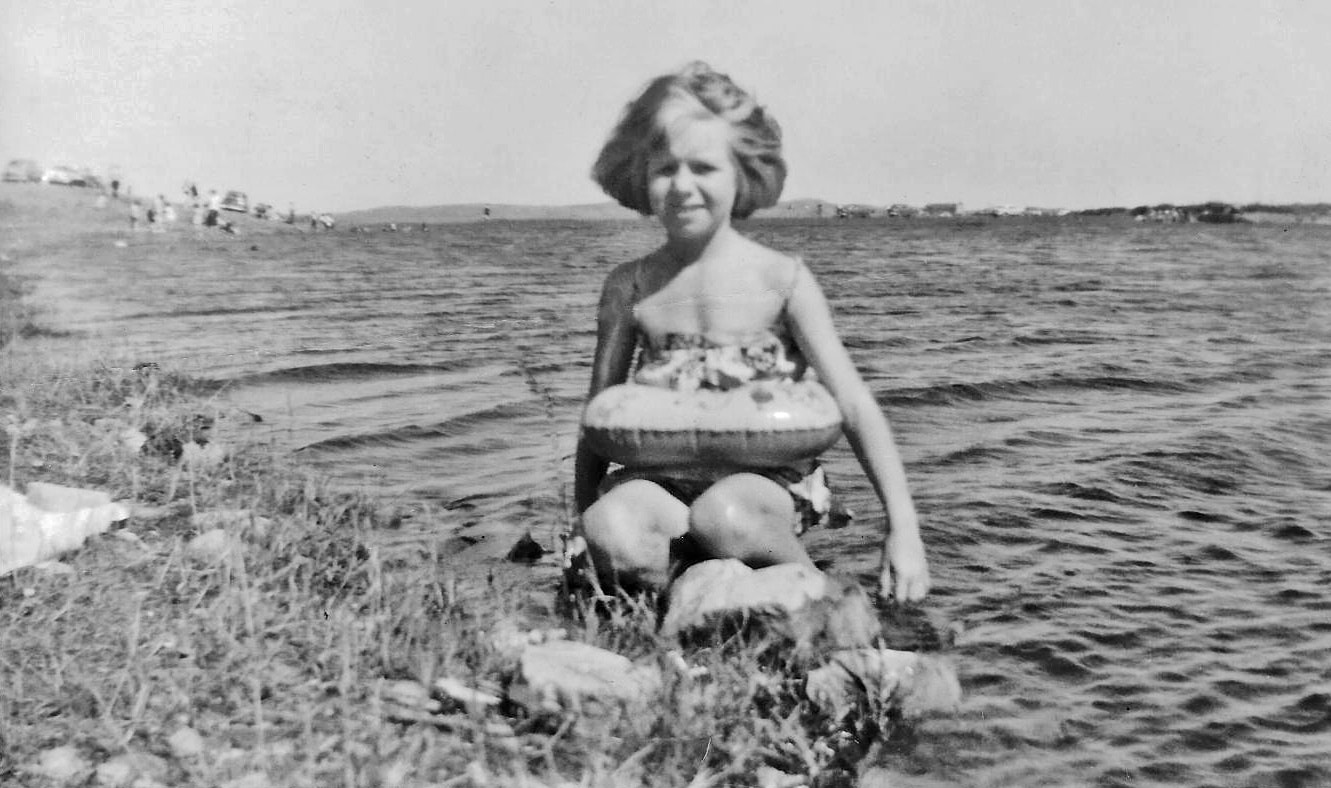 The Wabana Mines ceased operation at the end of June 1966. The West Dam remains intact in 2022. You can see great drone footage of the West Dam on YouTube at https://youtu.be/YLQB3vcRFsQ

It was noted on page 10 of the Town of Wabana Municipal Plan of 1991 that, "The West Dam Reservoir is not now in use as a water source, being periodically subject to contamination."
DOMINION PIER POWER PLANT DAM
The dam at Dominion Pier was built in the early 1950s to provide a water reserve for the Dominion Power Plant. By 1957, the plant was no longer needed, so the dam was removed to create a roadway for vehicles on mining company business to drive down to Dominion Pier and then along the shore to Scotia Pier. Prior to this, coal and mining supplies that were off-loaded at the piers had to be hoisted to the top of the cliffs on lifts that were known as "skips." The description and photos below are from the May 1957 issue of the Submarine Miner​, p. 8. Note: the word "drive" in the third paragraph should read "dam." 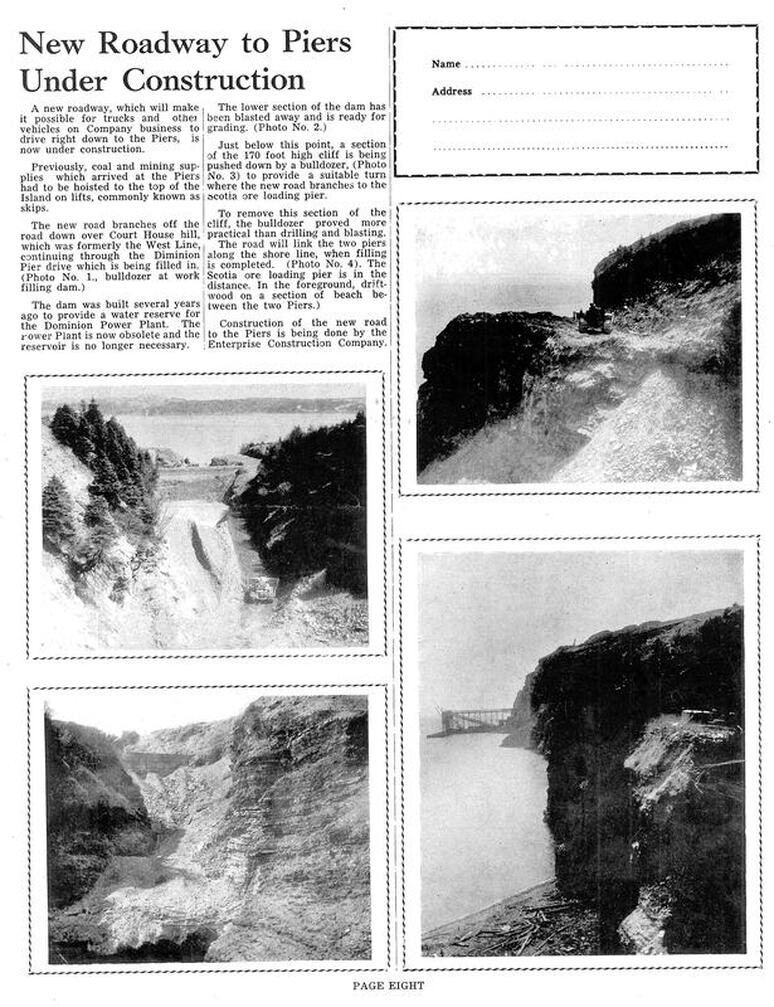 The 1954 Insurance Map below shows the Reservoir and Dam at Dominion Pier on the left and the Dominion Power Plant on the right. 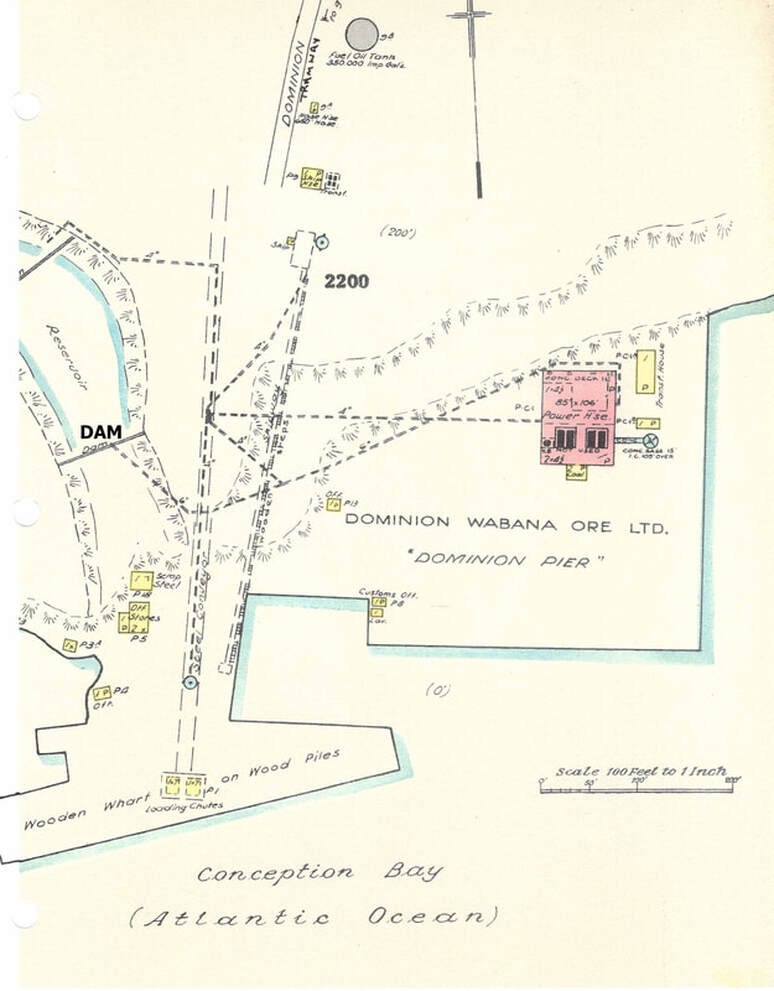 NO. 4 MINE COMPRESSOR DAM
In the center of the 1954 Insurance Map below, just above the words "No. 4 Mine Yard," is a depiction of the "No. 4 (mine) Compressor Dam." At the bottom of the map, just right of center, is the "Upper Dam." This is what was known by locals as Wild Duck Pond and, following construction in 1954, became known as "West Dam" which is described above. It is interesting to note that in the lower right corner of this map is another "dam" marked as "Lower Dam." The water from these two "dams" flowed into the "Main Brook," which crossed Main Street at Fitzgerald's Lane and helped define the limits of the Town of Wabana at that time.

QUESTION: Was the "Lower Dam" pictured in the map below also used for mining purposes? 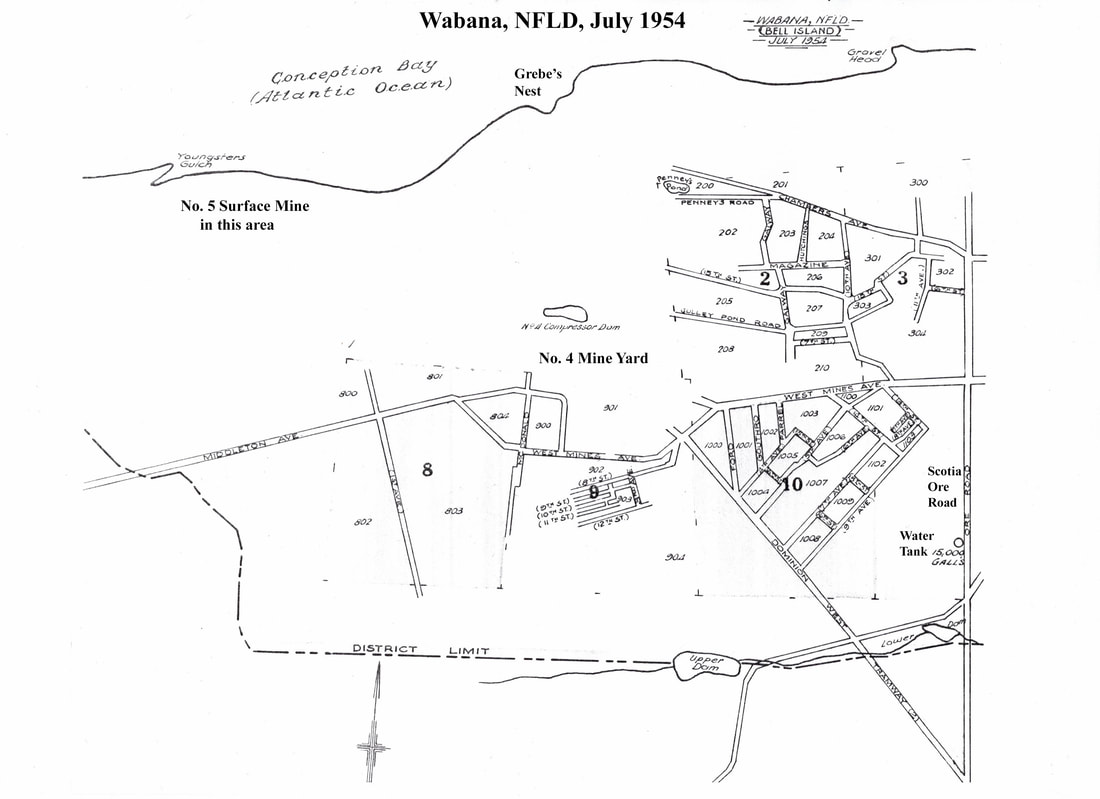 Below is an aerial view of No. 4 Mine Yard c. 1960 as seen from the north. The white strip in the bottom center of the photo is the mine collar. Beside it is the Dryhouse. McDonald Street of Company houses is in the top right of the photo. It is hard to tell for sure from this photo where the "No. 4 Compressor Dam" is located. Immediately southwest of the mine parking lot, tucked inside the curve in the road, is what looks like a small body of water; is that the dam? Or is the dam that grey area in the lower right corner of the photo? Source: Slide #71 of the Victor Southey photos that are featured in the "Photo Gallery" in the top menu. 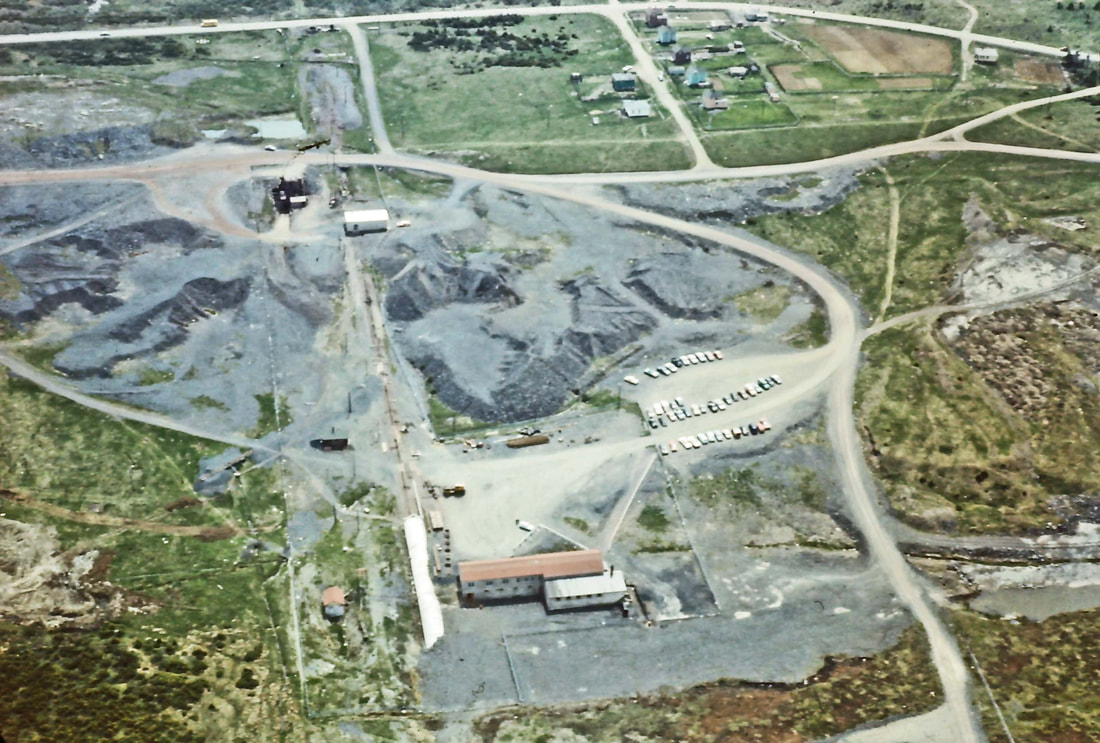 OTHER MINING-RELATED WATER BODIES
44-40 POND AT NO. 6 MINE
Below is a c.1960 aerial view of No. 6 Mine Yard, just right of center in the background. The Scotia Ore Road runs from No. 6 out the right of the photo past the northwest end of No. 3 Mine Yard. The pond in the center is known as "44-40." West Mines Road runs left to right through the center of the photo. The left side of the photo shows houses in the West Mines section of Bell Island. In the background of the left side of the photo is the outcrop from early surface mining. QUESTION: Was 44-40 Pond created by water pumped from No. 6 and No. 3 Mines, or did it have another purpose? Was it referred to as a "dam"?

Source: Slide #68 of the Victor Southey photos that are featured in the "Photo Gallery" in the top menu. 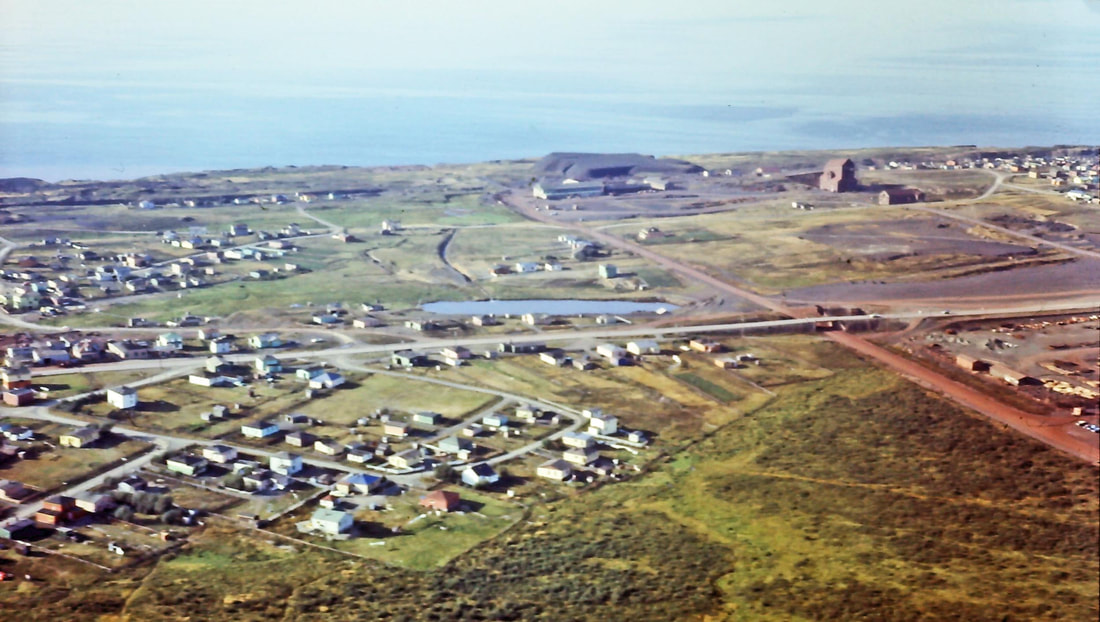 NO. 15 DAM & NO. 35 POND
The aerial photo below is looking northeast over No. 3 Mine Yard. The Arena was first built in 1913 and is just visible in the lower right corner, with Company houses on Wall Street, then No. 3 Yard, then Company houses of Dominion Range, with No. 2 Road cutting through the photo from west to east. No. 2 Mine deckhead is in the upper right. In the upper right background behind the smoke stack is what I believe to be No. 35 Pond. No. 35 was a surface mining area roughly behind where the Canadian Legion is today. (QUESTION: Is this the pond seen in the cover photo of the December 1956 issue of the Submarine Miner below?) A little west of No. 35 Pond is the smaller No. 15 Dam (just east of the blue mark in the photo). It was on the east side of Compressor Hill. No. 15 was another old surface mine. (From about 1898 to 1938, there were five surface pits between the Coal Yard, which was behind the building now used as the Boys & Girls Club, and the East End of the Island; they were numbers 15, 20, 25, 30 and 35.)

Source: Gord Johnson posted this photo on Facebook to illustrate where the No. 2 Mine barn was located. 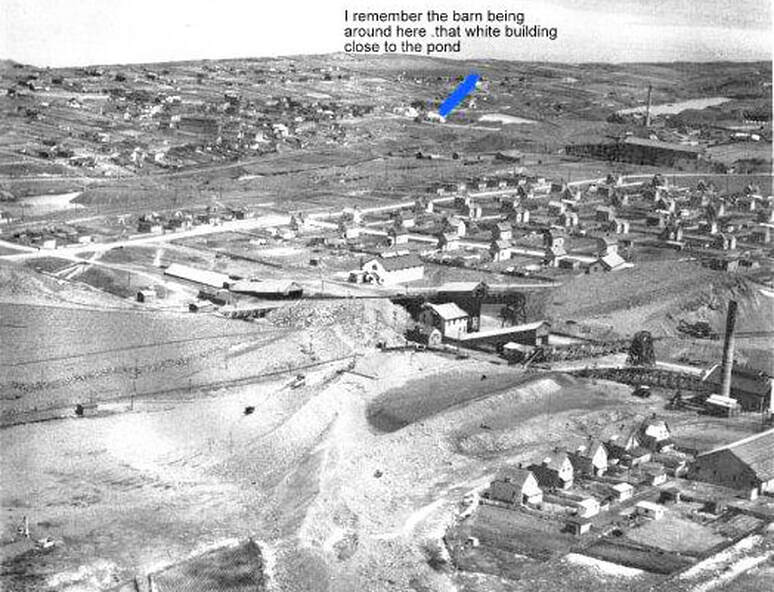 From the Wabana Star, Oct. 4, 1961, p. 38: "Did you know that 15 Dam, which claimed so many lives down through the years, has now been completely drained to make way for surface mining?"
Below is the cover photo of the December 1956 issue of the Submarine Miner.
​QUESTION: Is this a picture of No. 35 Pond to the north behind the Canadian Legion? 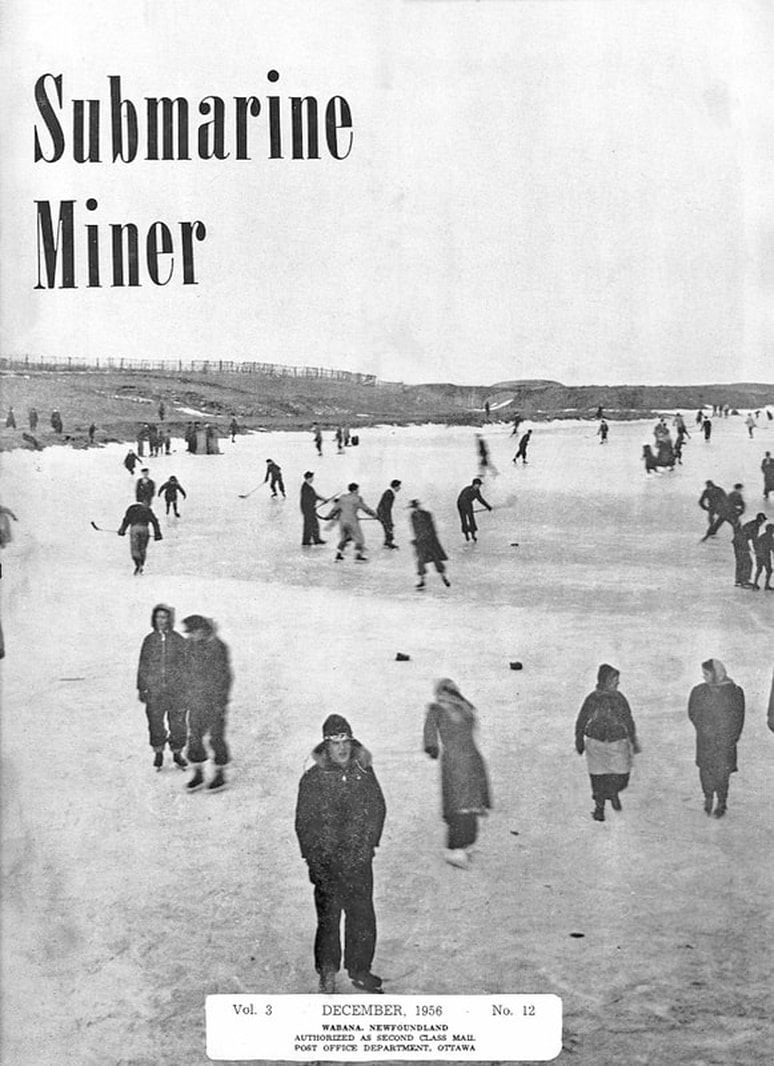 ROCK CUT ON EAST TRACK
The c.1930s photo below was taken at what was known at "the Rock Cut on the East Track (now Steve Neary Blvd.) just past the Pump House, on the west side going out to the Front." In the left background, iron ore cars are seen as they travel between No. 2 Mine and Dominion Pier. QUESTIONS: Did this water body have a specific purpose? What was the purpose of the Pump House on the East Track at that time? 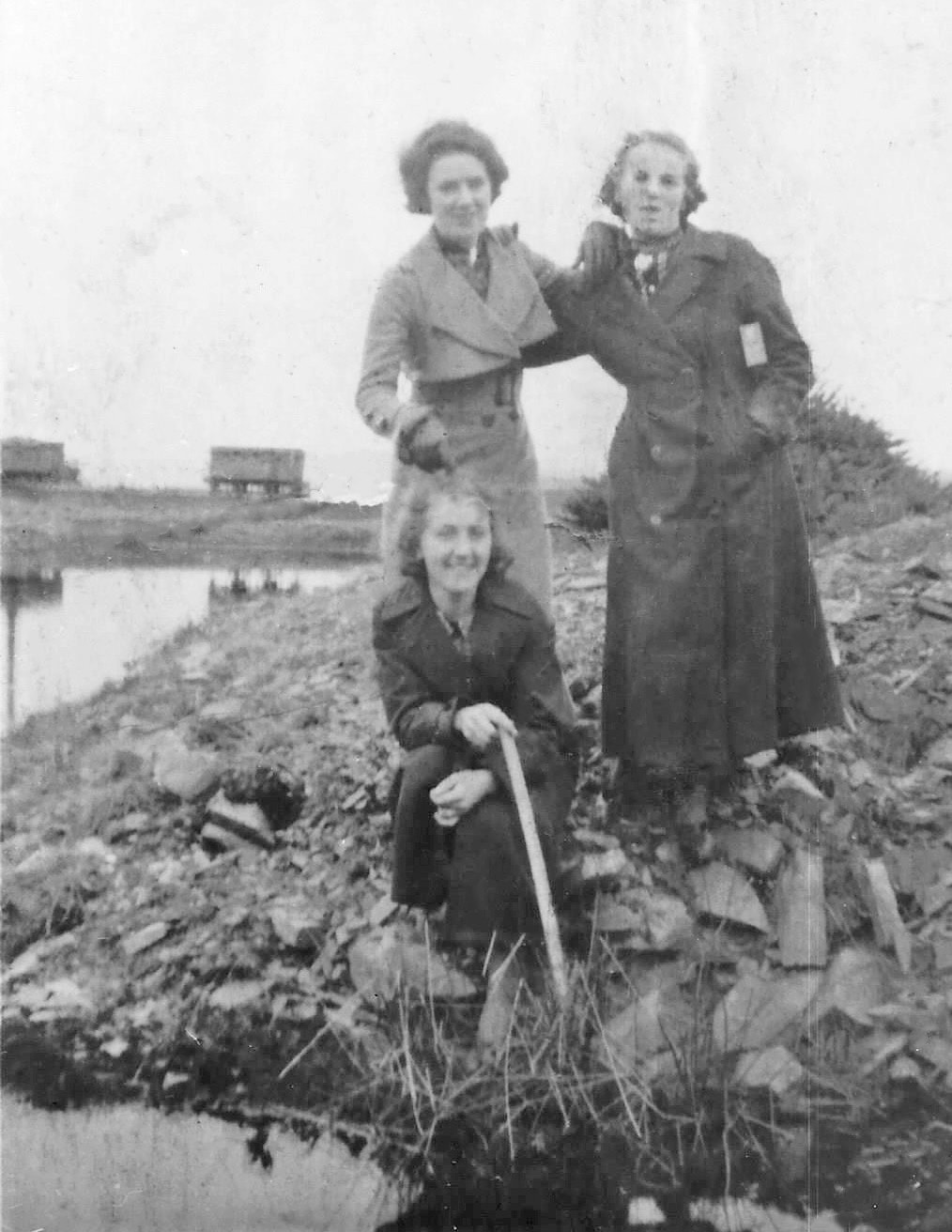 NOTE: As I find more information and photos, I will add to this page. If you have photos or info, please get in touch at