HISTORY
BICKFORDVILLE
by Gail Hussey-Weir
Created October 2022
This basic map of Bell Island is to show the location of Bickfordville (at the southwest end of the Island) in relation to other areas.

Below is part of a hand-drawn map entitled "Nova Scotia Steel and Coal Co. Ltd., New Glasgow, N.S. [N.S.S.&C.Co.] Plan of Wabana showing land and submarine mining areas." I have cropped the original to focus on the western end of Bell Island where Bickfordville is located. You can see the full map on this website in "Maps & Diagrams" in the dropdown menu under "History" at the top of this page. The map is undated, but going by mining structures shown in the full map, I am guessing c.1906-07. The road through Lance Cove was one of only a few actual roads at the time and is represented as a double line. If you follow it northwest from Lance Cove Head, you pass through Bickfordville and from there into Parsonsville. Small square dots along Lance Cove Road represent buildings. It is not known if this was meant to indicate all buildings at that time, but there is only one such dot in the Freshwater area and none in the Bickfordville area. Source of map: The Rooms Provincial Archives, Bell Island Map Collection, MG19 B-58 334. 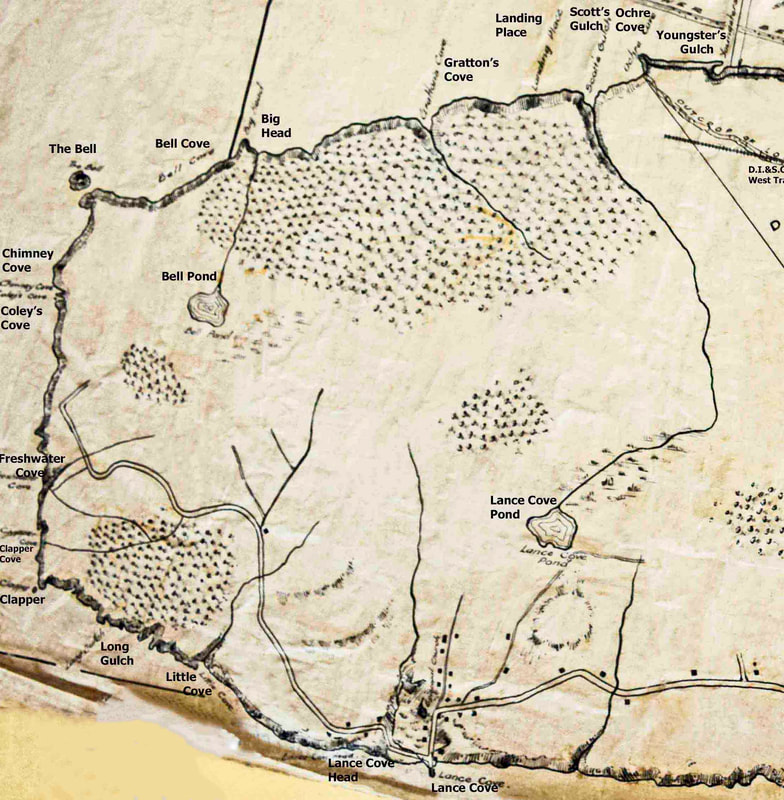 Bickfordville is a small unincorporated community on the southwest corner of Bell Island between the communities of Lance Cove and Parsonsville. The main road through Bickfordville is Lance Cove Road with several short roads branching off it, each one with signage indicating "Bickford's Road #1," "Bickford's Road #2," and so on. The majority of the population are descendants of Henry Bickford (1790-1879), who ​was believed to have been born in Wales and spent his early years in Bristol, where he trained as a shipwright. His family were known to the Rees family of Lance Cove, who had emigrated from Bristol. Henry came to Bell Island c.1820 to work in the Rees shipyard in Lance Cove. In 1827, he married Amy (nee Cooper, 1804-????), daughter of Edward Cooper (1764-June 15, 1825), whose headstone is located in the Old Pioneer Cemetery in Lance Cove.
​Source: Rod Bickford, 3rd great grandson of Henry Bickford.
When Henry Thomas Bickford (1865-1941), a grandson of the first Henry Bickford of Bickfordville, died in October 1941, Frederick F. Jardine wrote his obituary, which was published in the Daily News, and which contained information about the original Henry Bickford that presumably was obtained from family members. The story given in the obituary of the origins of the original Henry Bickford varies significantly from the story above and it is unknown which is more correct. Here is the excerpt from the obituary:

The first Henry Beckford, a West Country Englishman, a Soldier. He later became a Warden at the Penitentiary in St. John's. During his term as Warden, he was sent to Bell Island in charge of a detachment of prisoners, to do some public work in 1851 [sic: maybe should be 1821?]. The people at the Beach were then beginning to move up to the land they had cleared on the top of the island, and a road of sorts was built. Under the superintendence of Henry Beckford, a retaining wall under the cliffside was built. So well was the work done, that it remains today, and down the years has had but little repairs. In the meantime, Henry Beckford had taken land at Lance Cove and settled there permanently. This first Henry Beckford was a sterling character, and was held in great esteem by the first old settlers.
Source: Daily News, Oct. 9, 1941.
At the time of this writing, I do not have any information as to when Bickfordville became a community separate from neighbouring Lance Cove, but it is listed separately in the 1948 Voters' List.
A plebiscite was held in 1949 asking the people of Bell Island if they favoured the establishment of a town council. The Front, Lance Cove, Bickfordville and Freshwater remained unincorporated, while the area surrounding the mines incorporated as the Town of Wabana on August 29, 1950. A few years later, The Front joined Wabana.

The 1955 List of Electors for the Electoral District of Bell Island lists 70 people of voting age in the Bickfordville Polling Division. 52 of those had the surname Bickford. Of the remainder, the surnames included Hussey (2), Hutchings (3), Kennedy (7), O'Brien (2), Parsons (2), and Rees (2).
The main road through Bickfordville (Lance Cove Road) was paved in 1972.
Here are the roads that Elections Newfoundand & Labrador lists for Bickfordville in 2021:
​The community of Bickfordville including Bickford's Road; and Lance Cove Road.

The communities of Bickfordville, Lance Cove and Parsonsville are all part of Polling Division 34, which had a total of 285 registered electors in 2021.

Source: Elections Newfoundland & Labrador, 2021 Provincial General Elections Report, p. 100 (website accessed October 28, 2022).
The Loyal Orange Association Lodge in Bickfordville
Both the L.O.A. and L.O.B.A. had lodges in Lance Cove, with both operating out of the same building. At first they met in the former school house, which was just up the hill from the present-day Seaman's Memorial. They later relocated to a new hall in Bickfordville, across Lance Cove Road from where Bickford's Road #2 is today. That building was torn down in the 1970s.

The Lance Cove L.O.A. and L.O.B.A. parades would start at the Lodge in Bickfordville and march along the main road through Lance Cove, then back to St. Mary's Church. Jake Parsons was one of the men who led the parade as King William on a white horse. Most of the Protestant families in that area of Bell Island would be represented. Hundreds of people would turn out to watch the parade.
​Sources: Rod Bickford and Sandy Bennett.
​The "Bell Island Boom" of 1978
​(when international attention was focused on Bickfordville)
On April 2, 1978, there was a loud explosion in Bickfordville on the southwestern side of Bell Island which caused damage to some houses and the electrical house wiring in the surrounding area. Two cup-shaped holes in the ground of about two feet deep and three feet wide marked the major impact. Some TV sets in the neighbouring community of Lance Cove exploded at the time of the blast. It was initially thought to be caused by ball lightning. Meteorologists stated that atmospheric conditions at the time were not conducive to lightning. The boom was heard 55 kilometers away in Cape Broyle.