The Mission Statement of Lions Club International is: "Lions serve. It's that simple, and it has been since we first began in 1917. Our clubs are places where individuals join together to give their valuable time and effort to improving their communities, and the world."

Part of the stated purpose of Lions Clubs is "to promote the principles of good government and good citizenship, to take an active interest in the civic, cultural, social and moral welfare of the community, to provide a forum for the open discussion of all matters of public interest provided, however, that partisan politics and sectarian religion shall not be debated by club members, and to encourage service-minded people to serve their community without personal financial reward, and to encourage efficiency and promote high ethical standards in commerce, industry, professions, public works and private endeavours."

The Encyclopedia of Newfoundland and Labrador says that the first Lions Club in Newfoundland was chartered at Corner Brook on May 26, 1948. Soon after that, a club was chartered in St. John's. By 1957, the number of Lions Clubs in the province had grown to 35, the number required to form a "district." By 1976, there were enough clubs to split into two. That same year, the first women's branch, called Lioness Clubs, was formed in Newfoundland at Bay Roberts. In 1987, Lions Clubs throughout the world opened membership to women.

A website called "opencorporates" gives the following information about the Lions Club of Bell Island, NL: It was incorporated on March 22, 1960 with the company number 3196, and dissolved sometime prior to June 2004. In spite of that incorporation date, it was on the go at least by 1954 because an item in the December 1954 issue of the Submarine Miner on page 8 entitled "Boys' Club Proposed," states that Frank Squire, President of the Bell Island Lions Club, attended a meeting to discuss the formation of the Boys' Club. Other than these few clues, I was not able to find a history of the Lions Club on Bell Island, so if you know when it began on Bell Island and/or when it ceased functioning, please get in touch at historic.wabana@gmail.com.

Below are reports of Lions Club activities in the Submarine Miner magazine during the 1950s, along with newspaper clippings of the executive from that time period:

Monday, September 6, 1954, was Labour Day. That month's issue of the Submarine Miner reported that, "In spite of the miserable weather that prevailed on Labour Day, a large number of Bell Island people spent the afternoon at the Sports Field where the annual Labour Day program was held, sponsored by Local 4121 U.S.A., C.I.O. [the Miners' Union]. The Union Sports Committee was assisted by members of the local Lions Club in running the side shows."

In May 1955, the Lions Club sponsored a speech contest, which was won by Doris Parsons, Alamena Tucker and Betty George.

On June 1, 1956, the Bell Island Lions Club went door-to-door to sell 750 brooms as a fundraiser for the Canadian Institute for the Blind.

On May 24th, 1957, James Murphy of Theatre Avenue was the lucky winner of a Chevrolet sedan in the Lions Club draw.

When a new annex to the Canadian Legion Memorial Building was officially opened on November 11, 1957, it was noted that the Legion building "has been more or less a community center here. The two welfare Clubs, Kiwanis and Lions, hold their meetings here..." 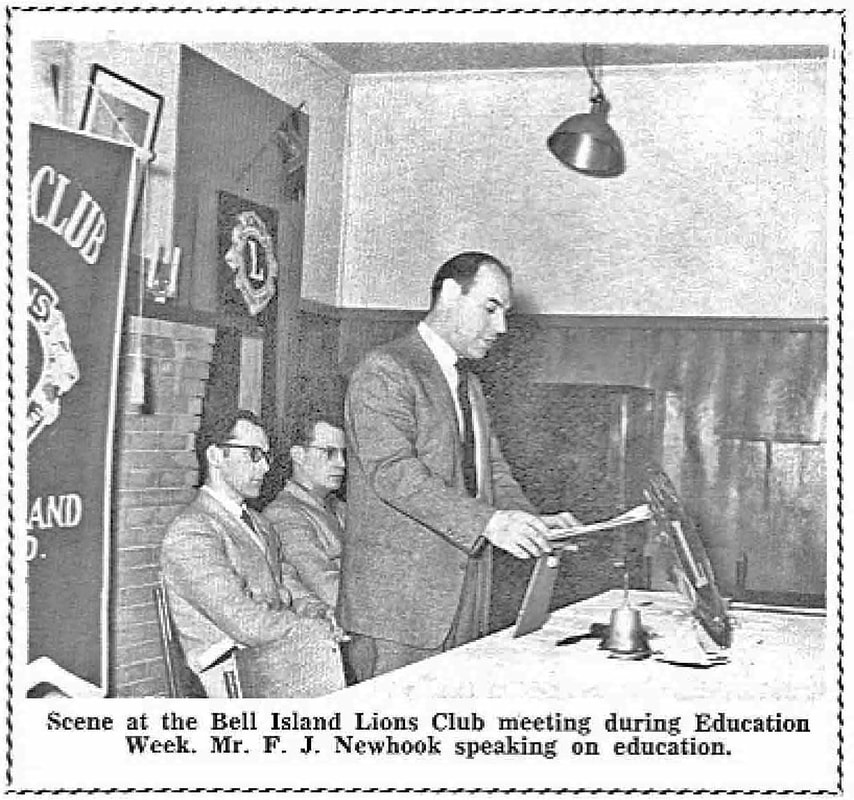 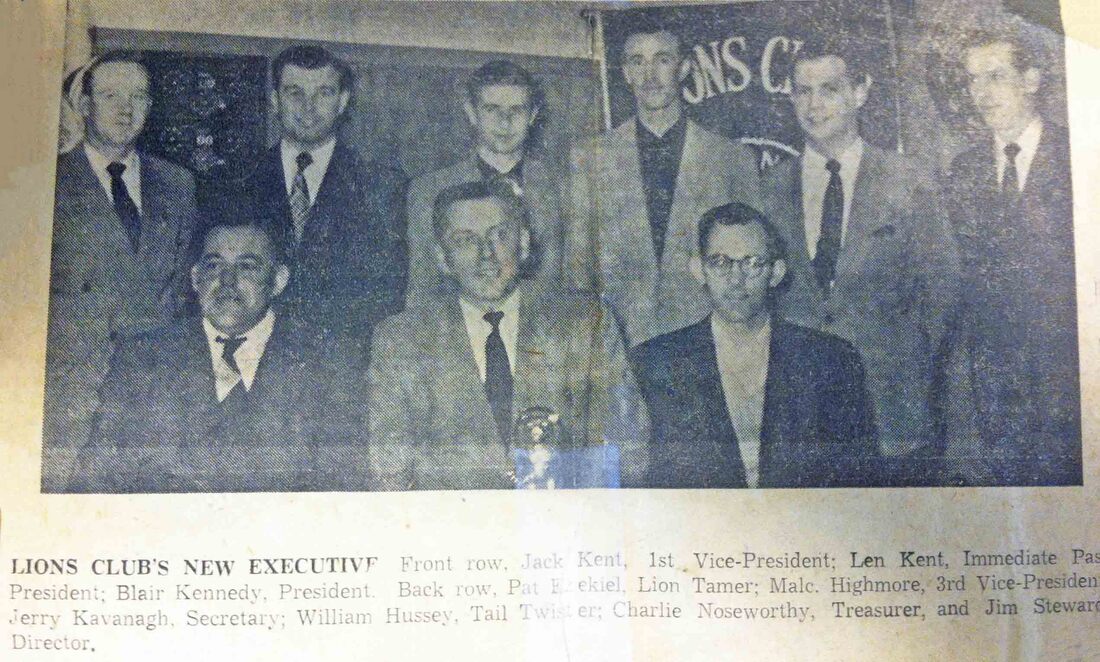 The newspaper clipping above of the "Lions Club's New Executive" is from the Daily News, c. May 18, 1956. They are:
Front row: Jack Kent, 1st Vice-President; Len Kent, Immediate Past President; Blair Kennedy, President.
Back row: Pat Ezekiel, Lion Tamer; Malcolm Highmore, 3rd Vice-President; Jerry Kavanagh, Secretary; William Hussey, Tail Twister; Charlie Noseworthy, Treasurer; and Jim Stewart, Director. Thank you to Eileen Kavanagh for this and the other newspaper clippings on this page. 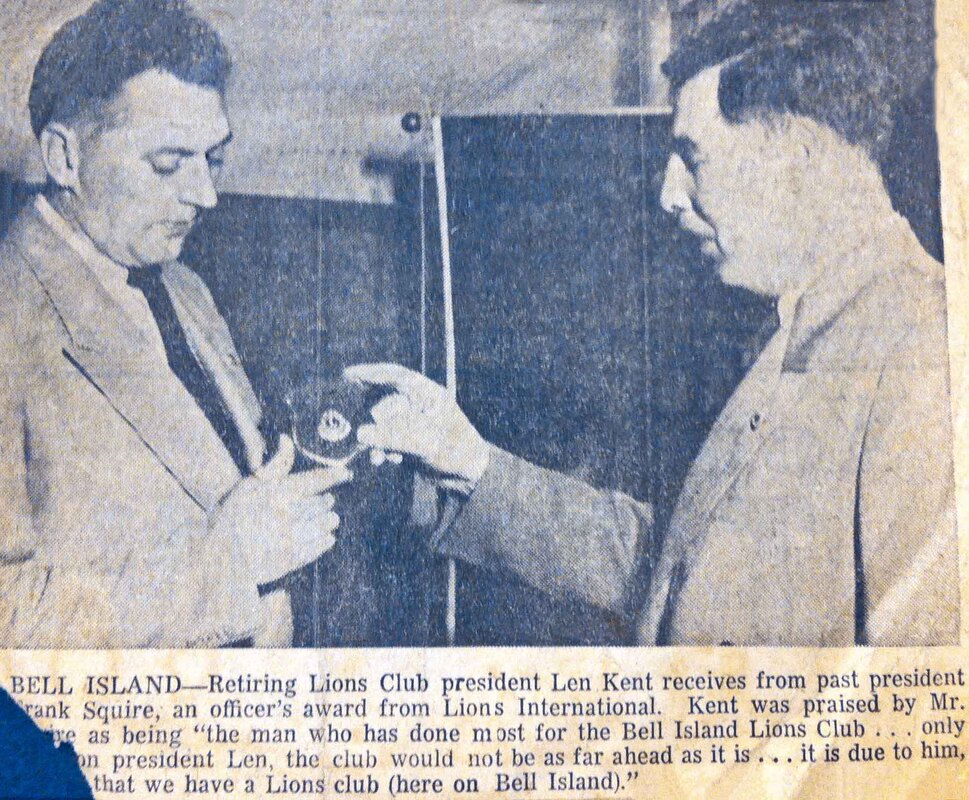 The news clipping above is probably from May of 1956 when Len Kent became the Past-President of the Lions Club.
The clipping above left was from May 1956 announcing that Pat Ezekiel and Jack Kent would be representing the Bell Island Lions Club at the Lions International Convention in Halifax in June of that year. The clipping on the right is from June 18, 1956 following their return from the convention. In the meantime, a news story from earlier in June told the story of how they almost missed their flight to Halifax. It seems that due to a suspected fog close-in on the day of their flight, TCA officials at Torbay Airport decided to reschedule the flight to leave a few hours earlier. When the men were telephoned about the new schedule, they only had a few hours to make it to the airport, but the ferry Elmer Jones could not leave Bell Island until 1:00, which was only 20 minutes before the newly scheduled flight departure. "So Kent and Ezekiel got Beach fisherman Frankie Spencer to hook up his motor boat and to take them across." But first, a car had to be "sent in over the Island for gas for the boat, and soon the men were on their way." 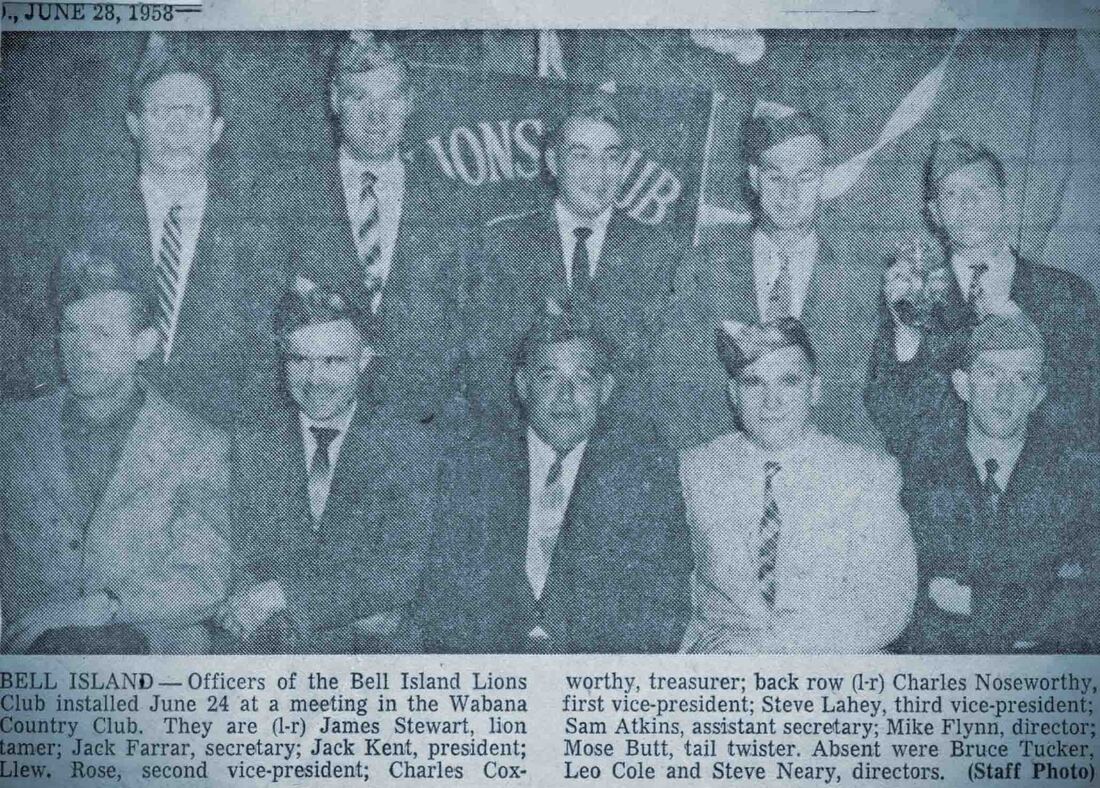 The news clipping above of the executive officers is from the Evening Telegram, June 28, 1958. 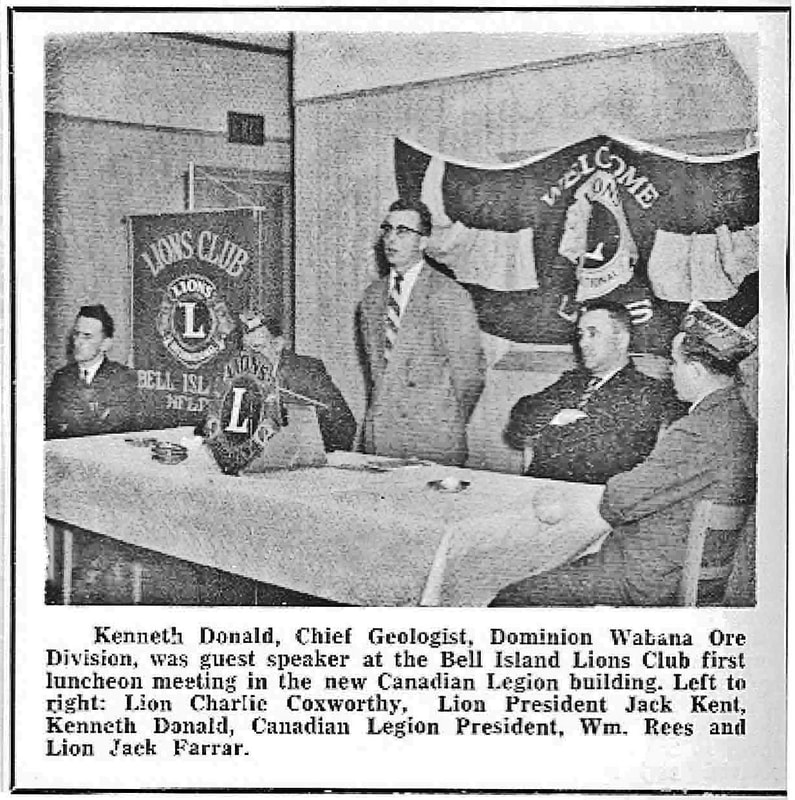 The photo above is from the Submarine Miner of November 1958, p. 8. 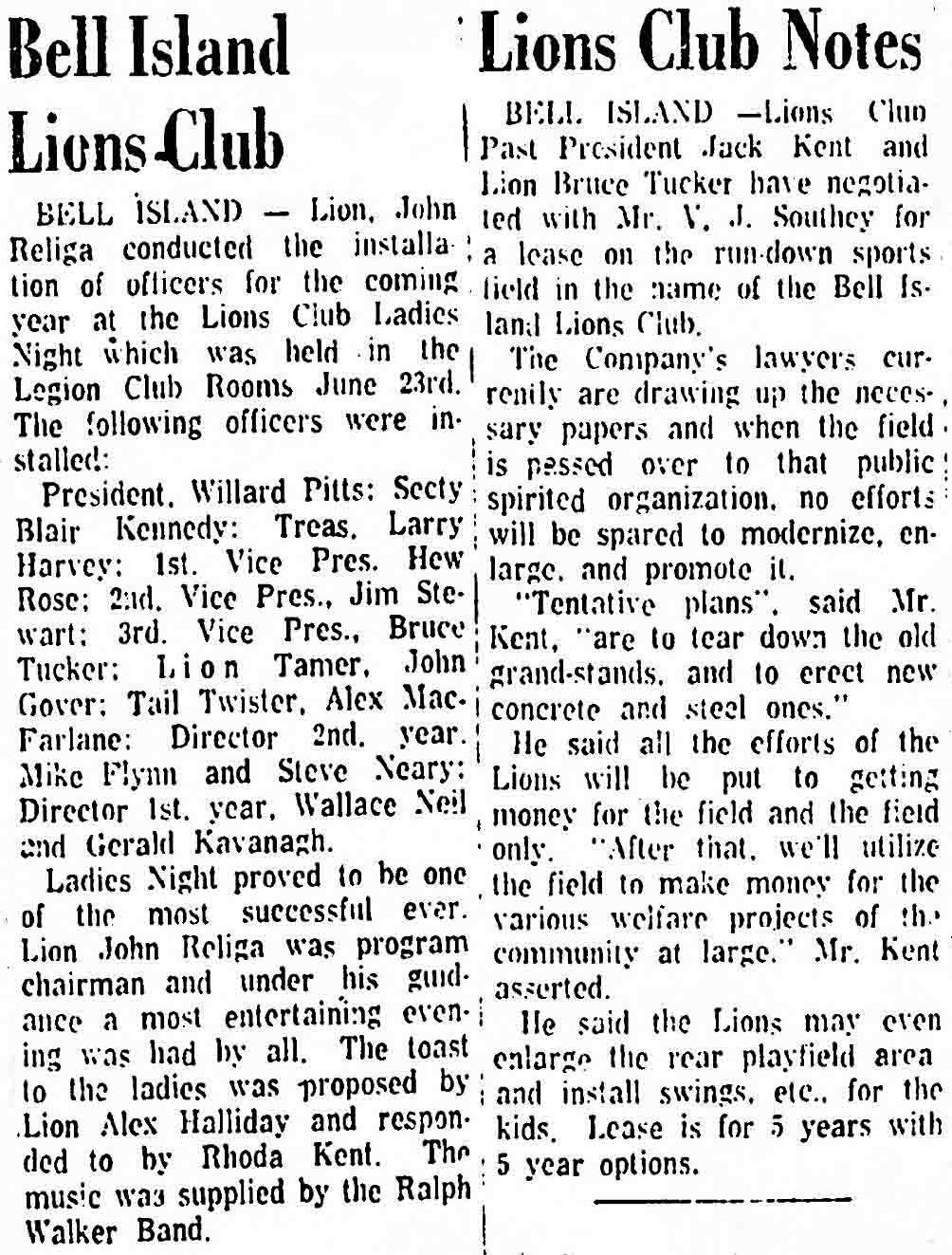 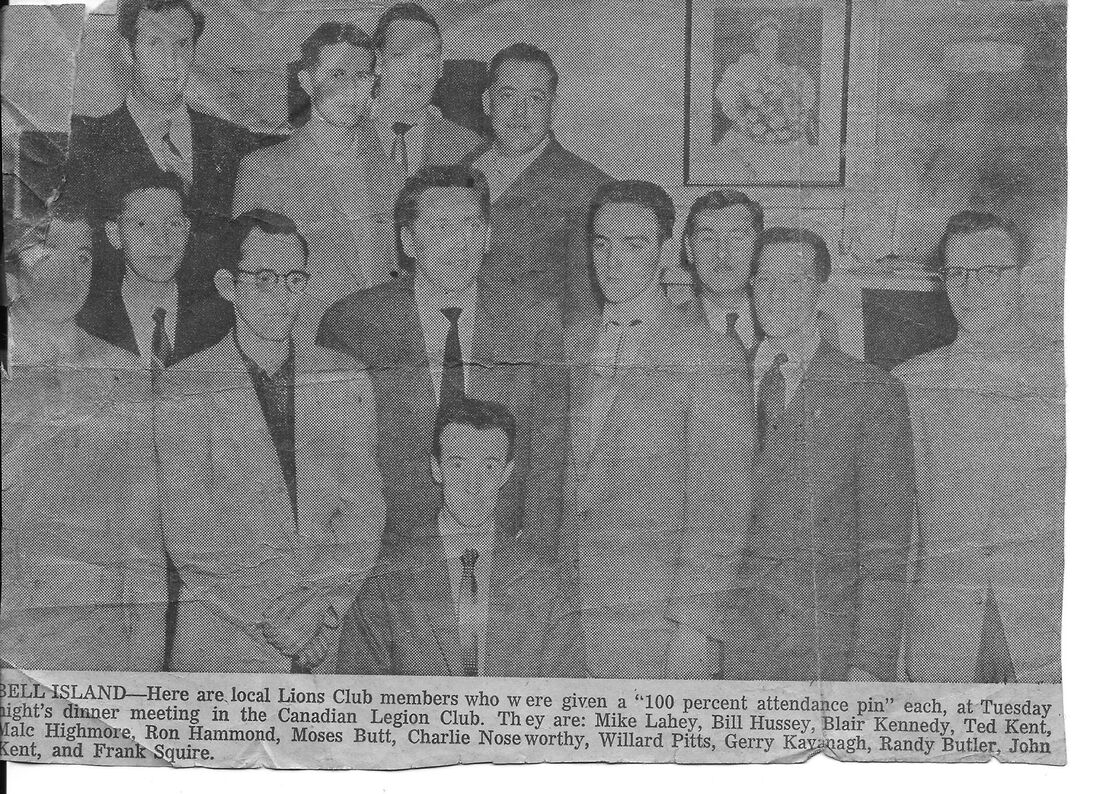 The news clipping above of Lions Club members receiving their 100 percent attendance pins is probably from the Evening Telegram, date unknown. John (Jack) Kent is #4 of the 4 men in the back row. Frank Squire is #6 of the 8 men standing behind the seated man.