PUBLICATIONS
"HISTORY AND PROBLEMS OF THE WABANA SUBMARINE IRON MINES"
by Victor Southey
in
Canadian Institute of Mining and Metallurgical Bulletin
Vol. 62, No. 684, April 1969, Pages 371-396
​ 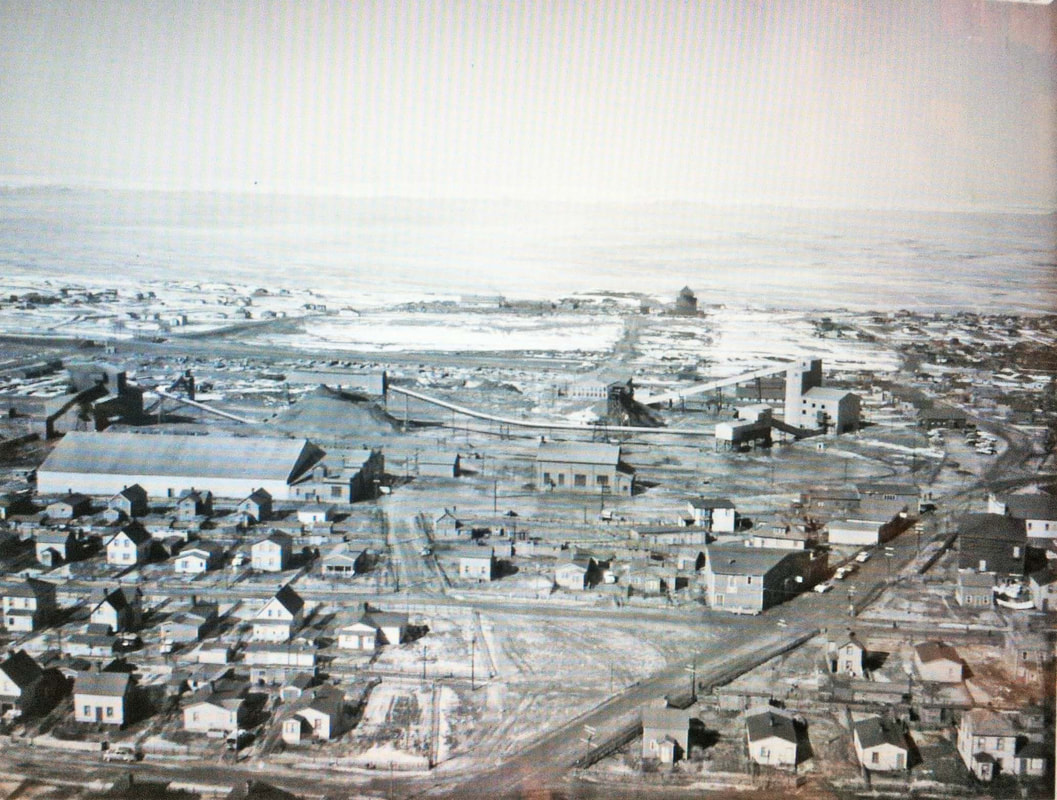 Victor Southey was a Mining Engineer who came to Bell Island in June 1956 as the General Superintendent of Dominion Wabana Ore Limited. (Read his biography on this website by clicking on "S" in the drop-down menu under "People.") In 1957, he was appointed Resident Manager at Wabana, a position he held until 1965. After Hawker Siddeley Canada, the final owners of the Wabana Mines, declared they were closing the operation, Southey was among DOSCO officials who attended meetings with Premier Smallwood and the Government of Newfoundland in hopes of persuading them to take over the running of the mines, but their efforts failed. He authored the paper (below) entitled "History and Problems of the Wabana Submarine Iron Mines" that was published as the feature article in the April 1969 issue of Canadian Institute of Mining and Metallurgical Bulletin. The photo above graced the cover of that issue. Taken c.1960, it looks northwest over Scotia Ridge and No. 3 Mine Yard, with No. 6 Mine Yard in the middle background. The paper gives a good overview of the history of the mines, outlining the improvements to the operation over the years. It also discusses the changes taking place in the steel-making industry, the discoveries of new iron ore deposits that were cheaper to mine, and the problems with the Wabana iron ore that eventually led to the closure of the mines.

Gail's notes on some points of interest:

P. 372 has an aerial view showing some Company houses around No. 3 Mine, plus a map of the mines.
P. 373 has a drawing of slopes.
P. 374 has a drawing of shale, sandstone, etc. and an early photo of cliffs.
P. 375 gives early mining history; submarine extensions were begun in 1904 and 1916. DOSCO took over in 1930.
P. 376 has an isometric plan of the mines.
P. 377 "In 1949, the year Newfoundland joined Confederation, Wabana contributed 43.4% of Canada's total iron ore production." History of production, mechanization from 1950-1966. Closure of No. 6 and No. 4 Mines.
P. 378 has a drawing of underground crushing system.
P. 381 has a plan of lower-bed workings.
P. 383 has mining layouts.
P. 395 Conclusion: "Wabana was a venerable iron ore producer that failed to measure up to the high economic standards established through a new steel-making technology allied to the utilization of low-cost, high-grade iron materials. It is a sober reminder of the vulnerability of all mining enterprises and of the vital need for flexibility in long-range planning... The existence of potentially large ferruginous reserve should not be forgotten, as it may command attention under more favorable circumstances." 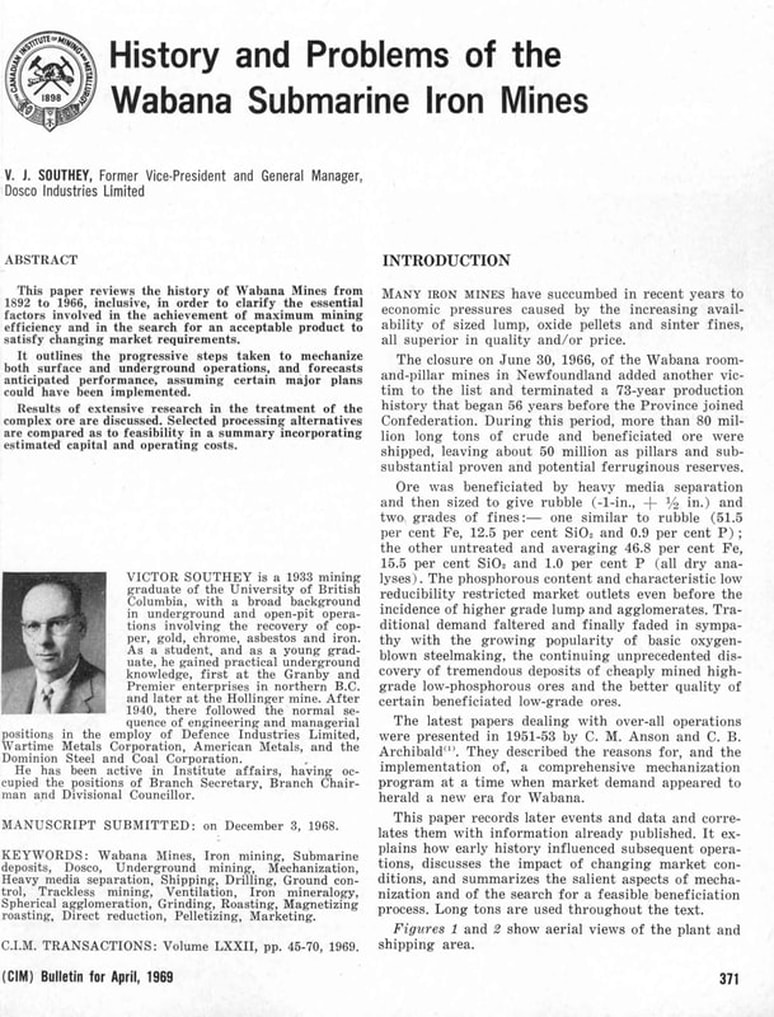 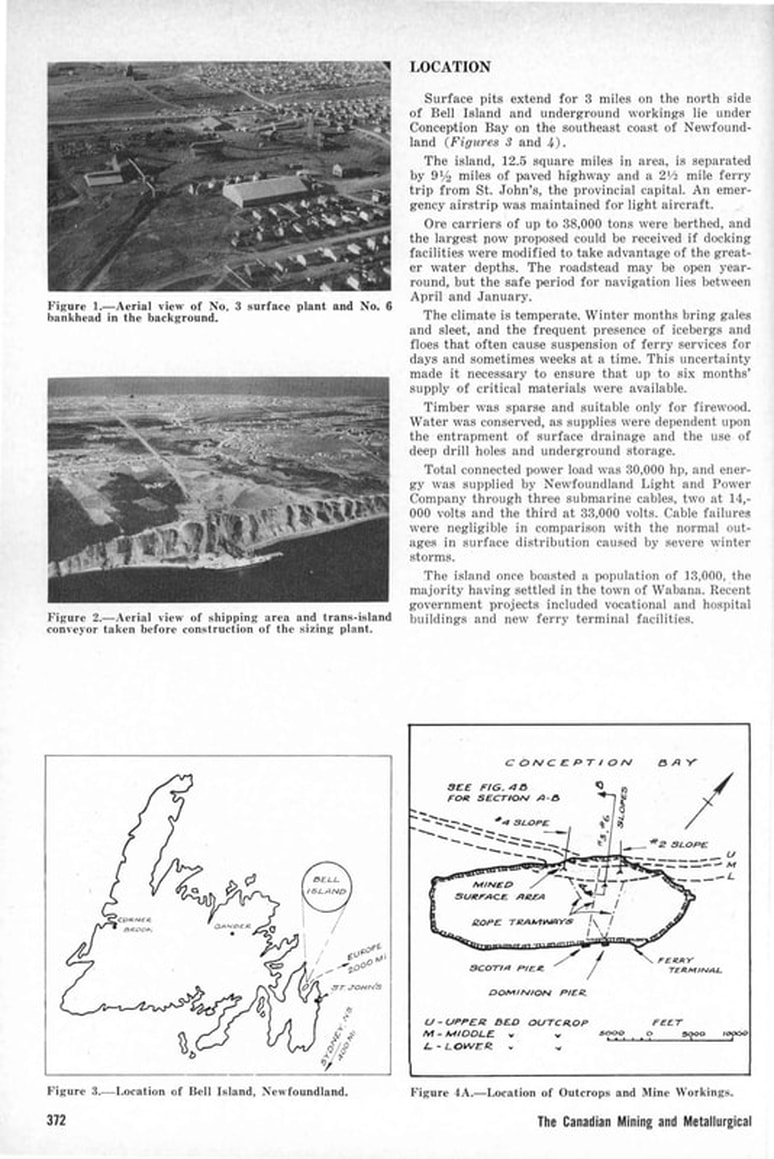 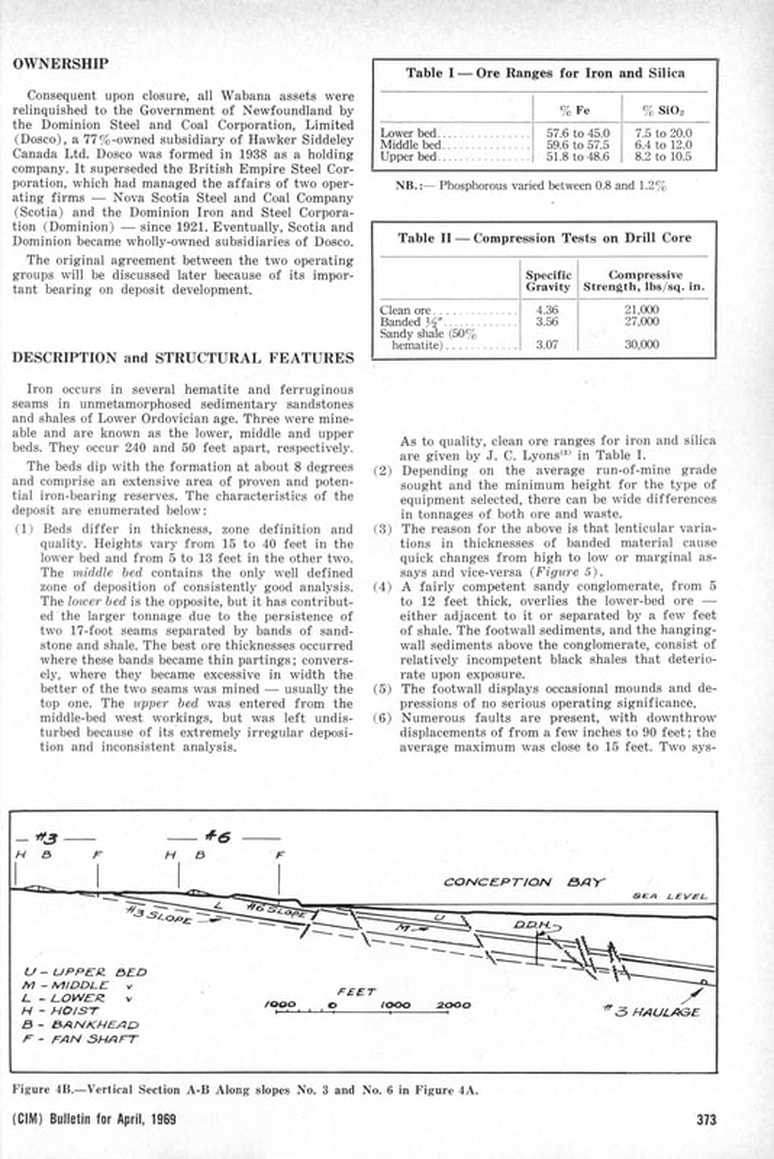 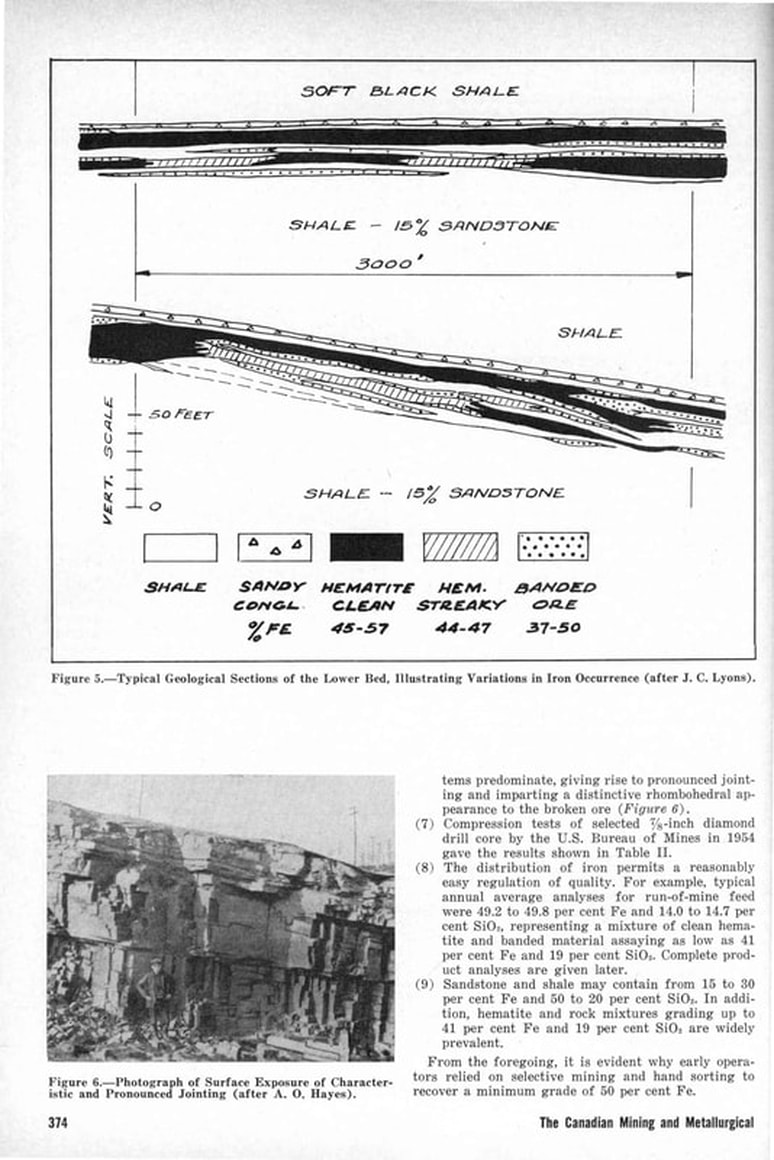 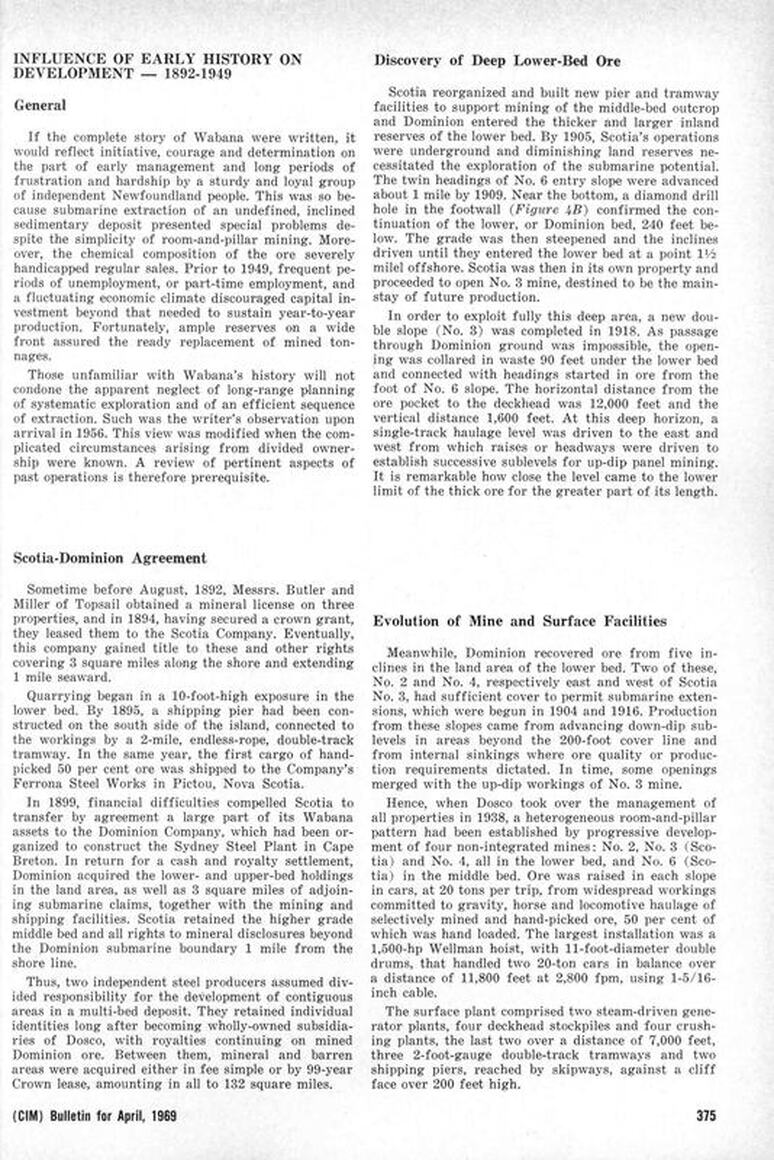 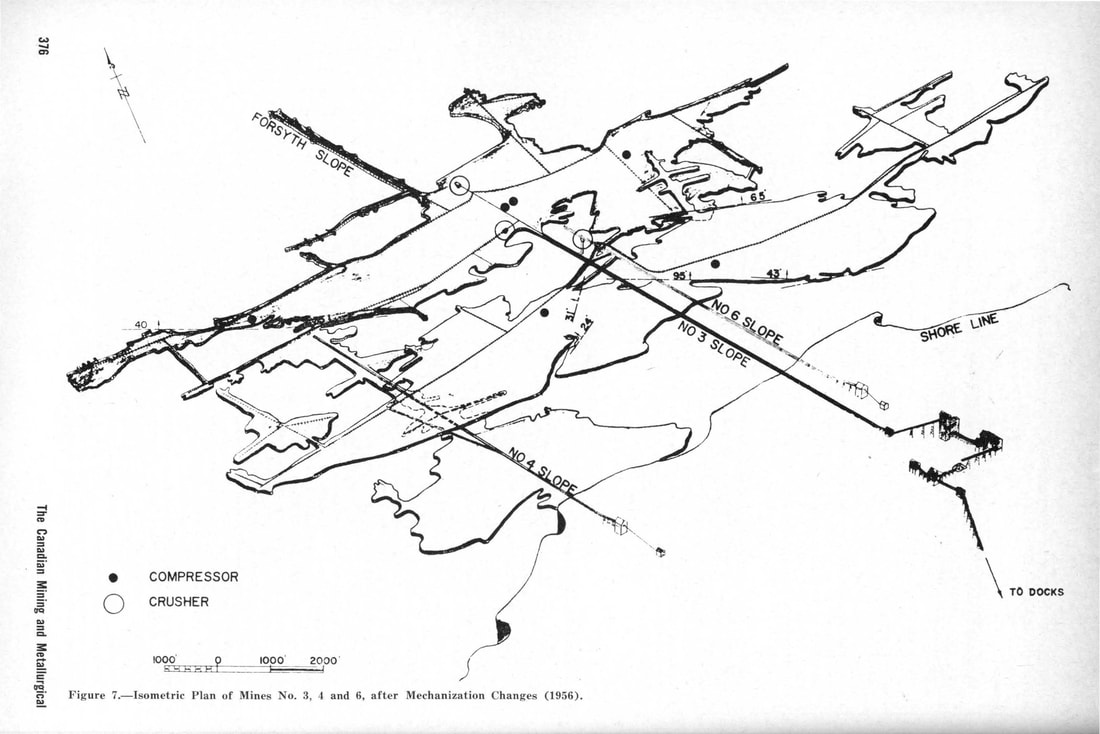 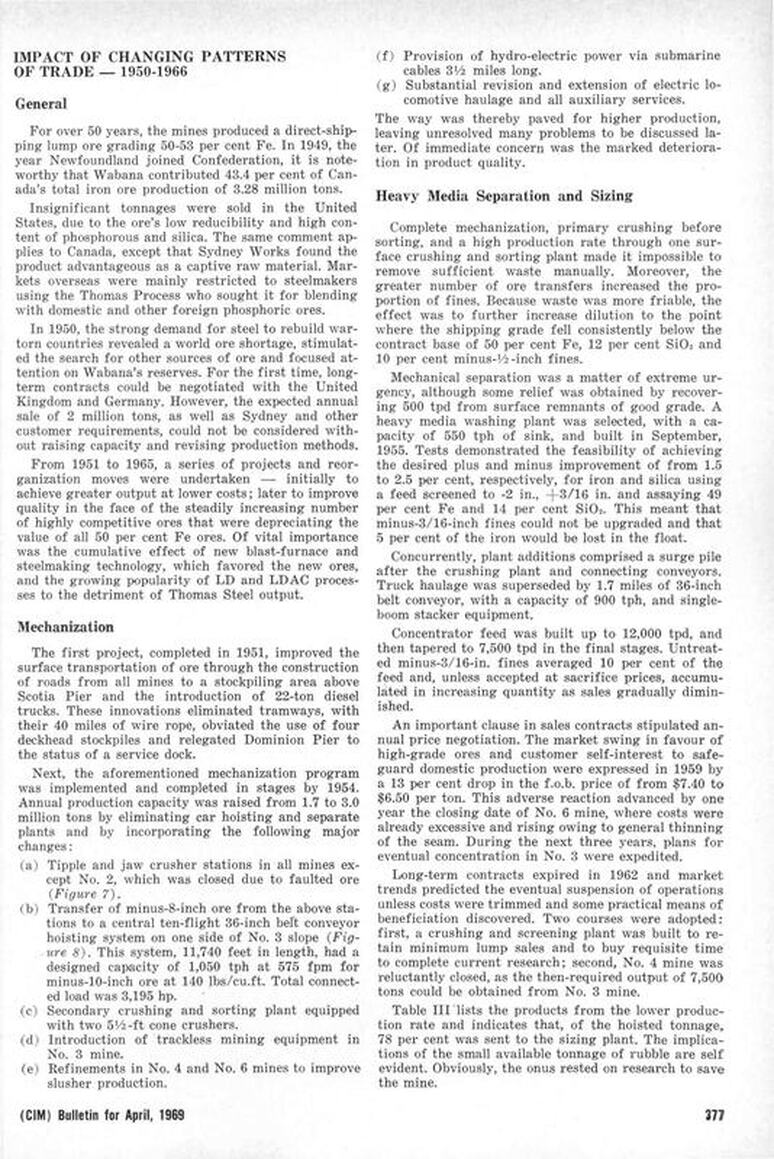 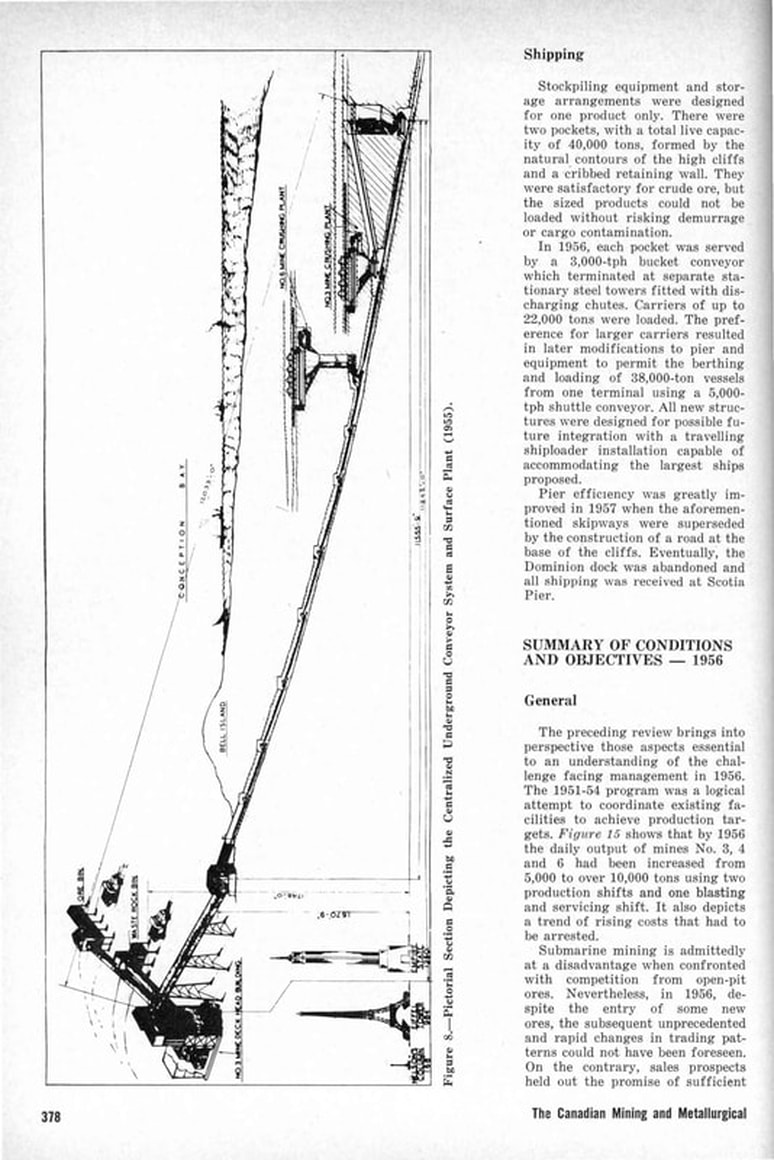 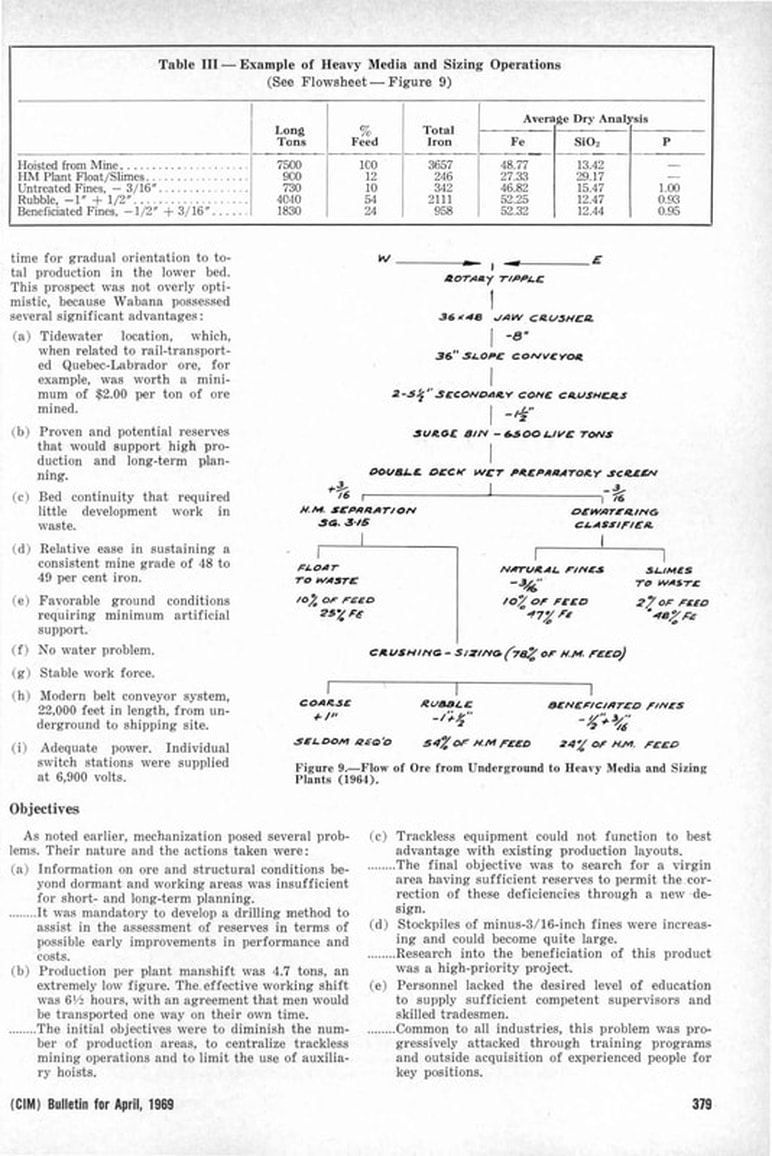 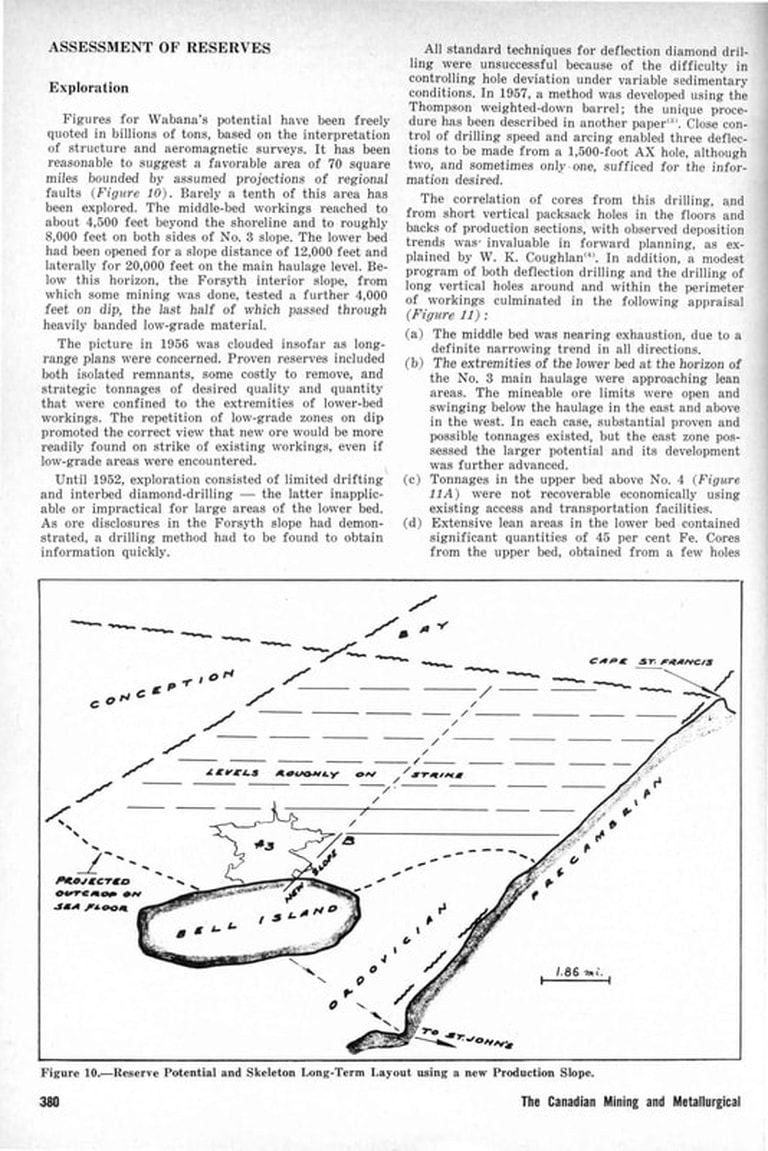 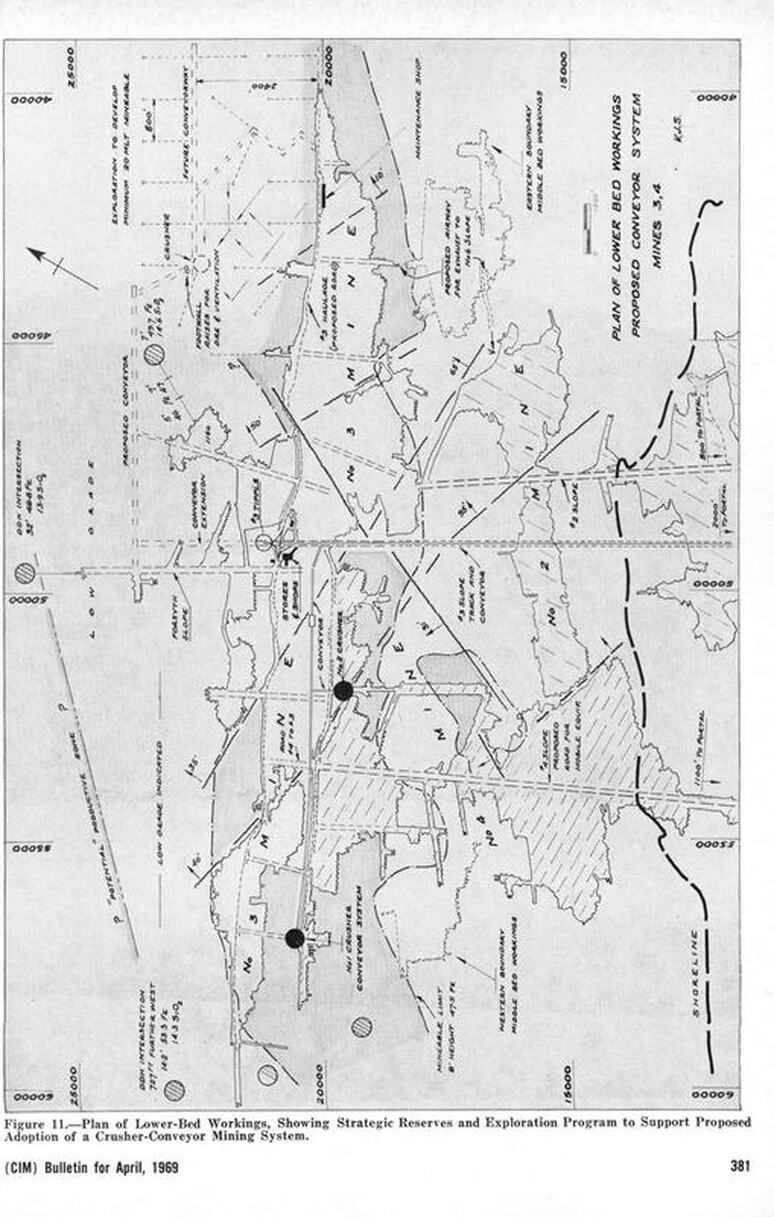 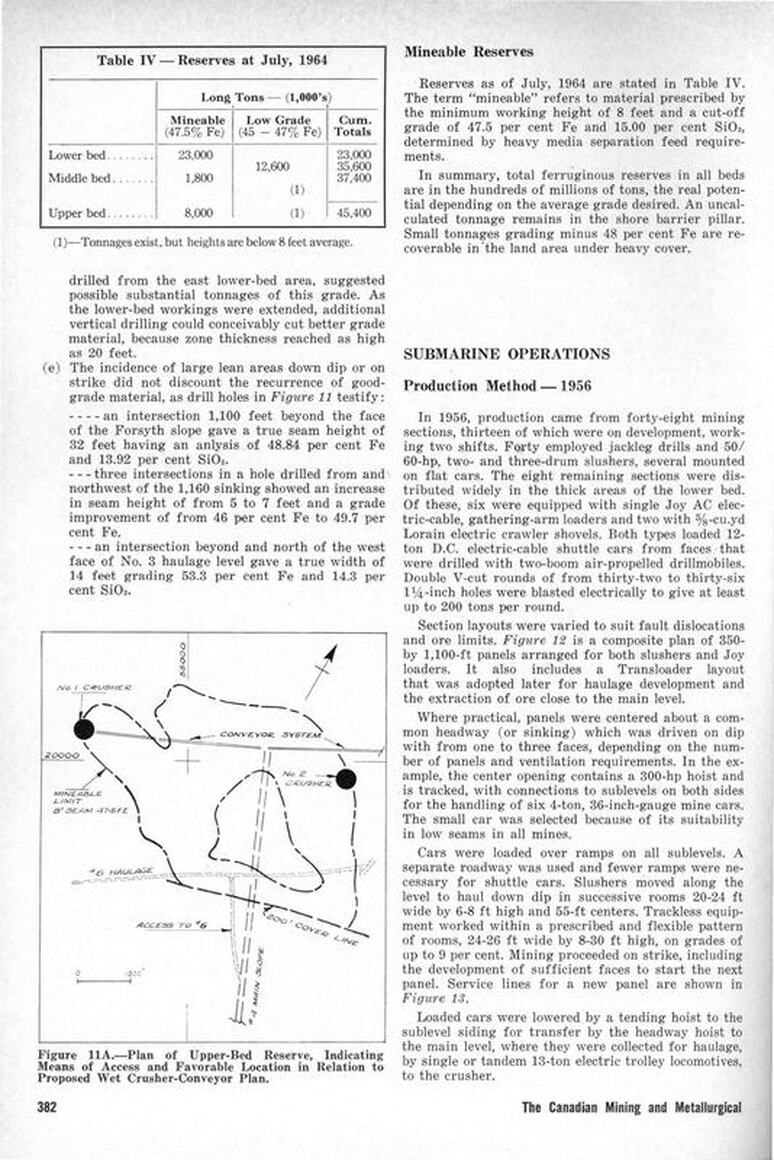 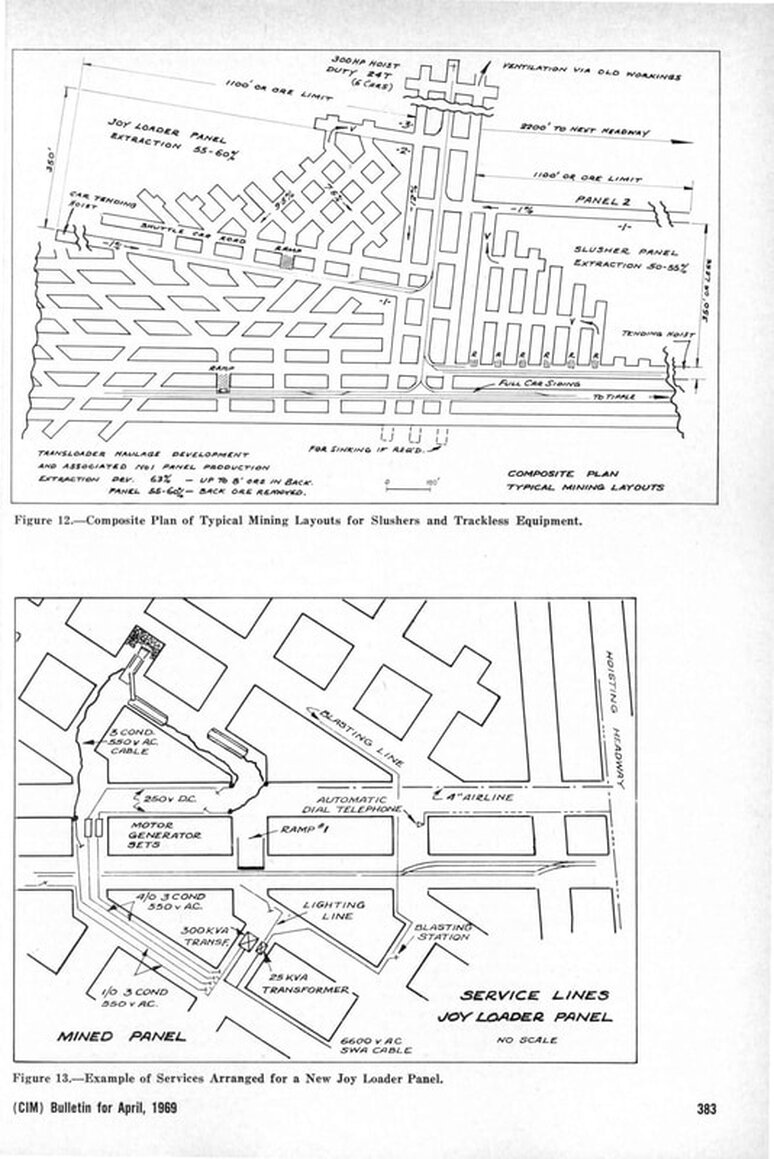 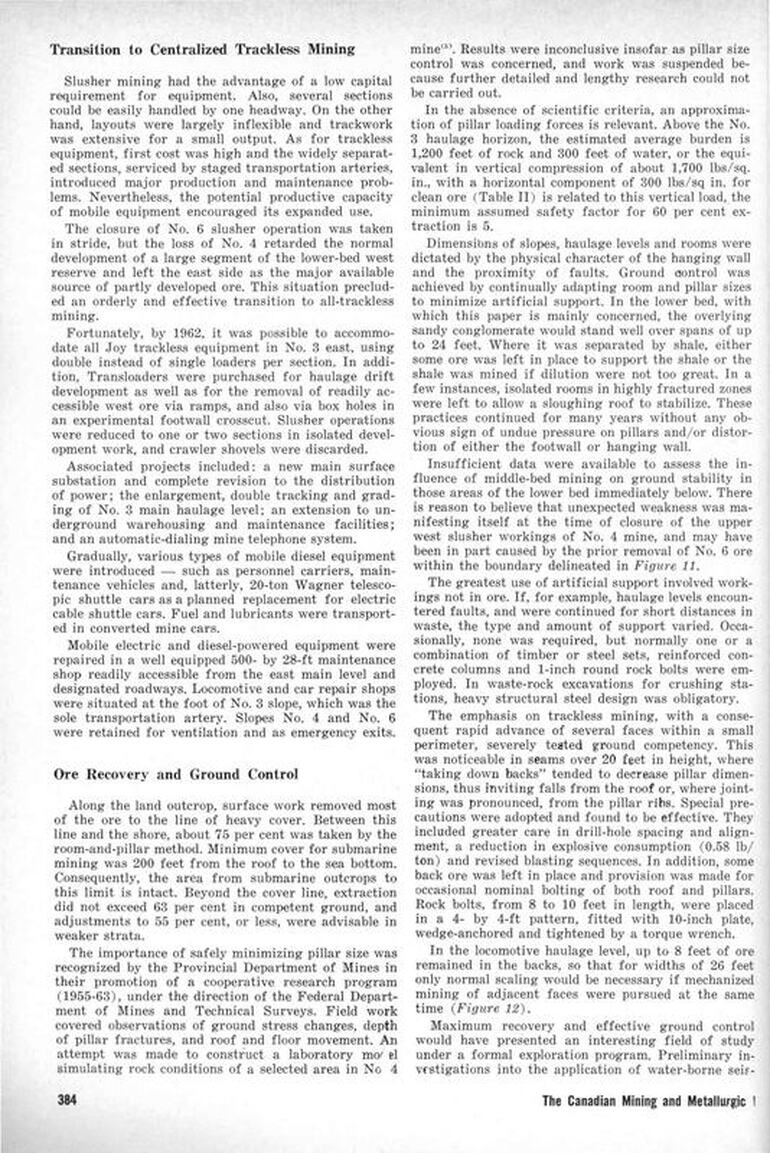 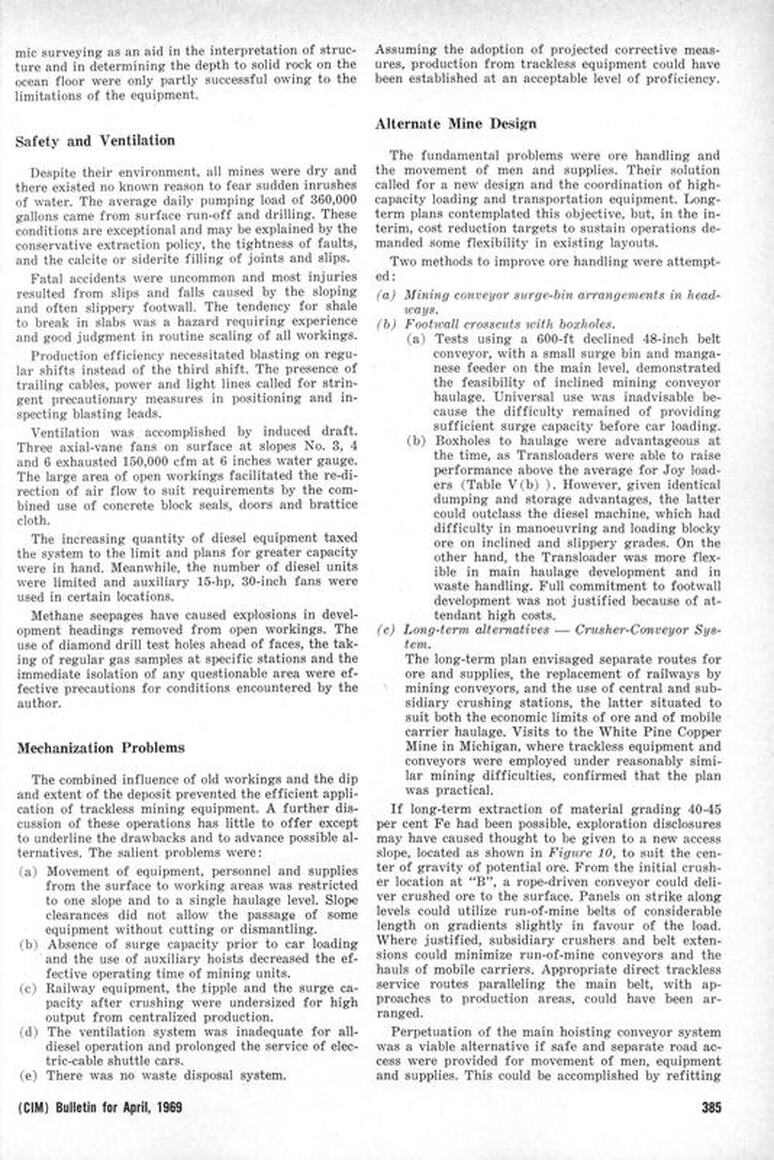 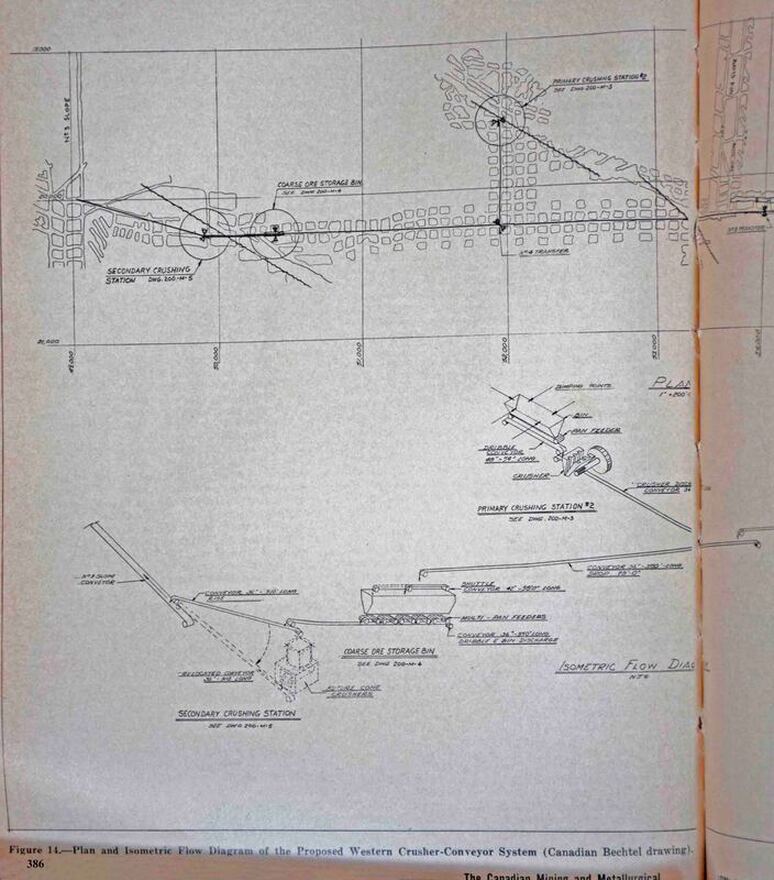 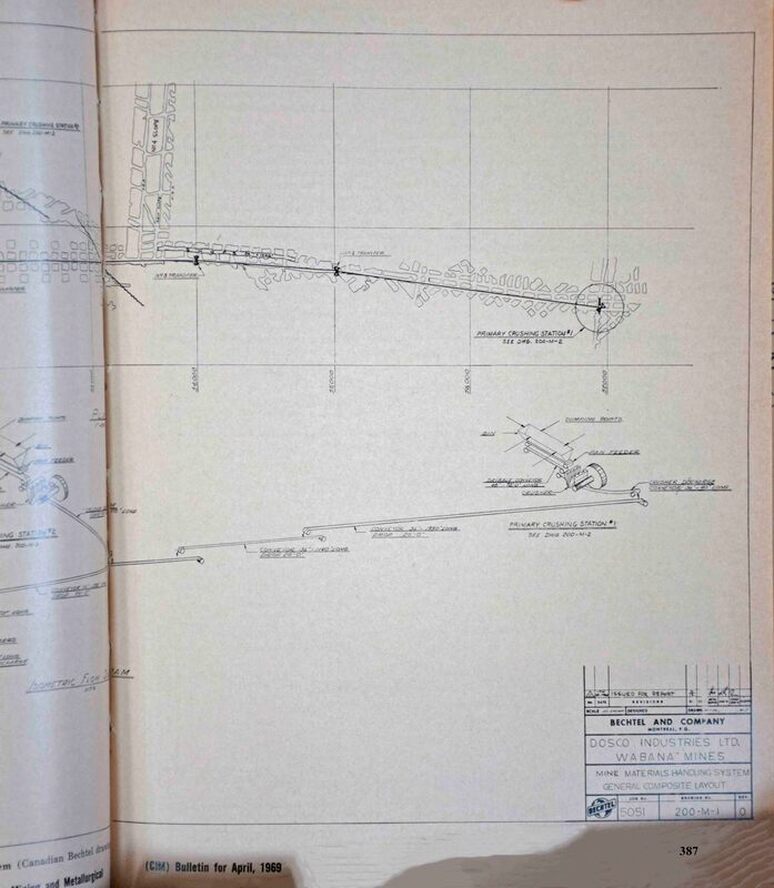 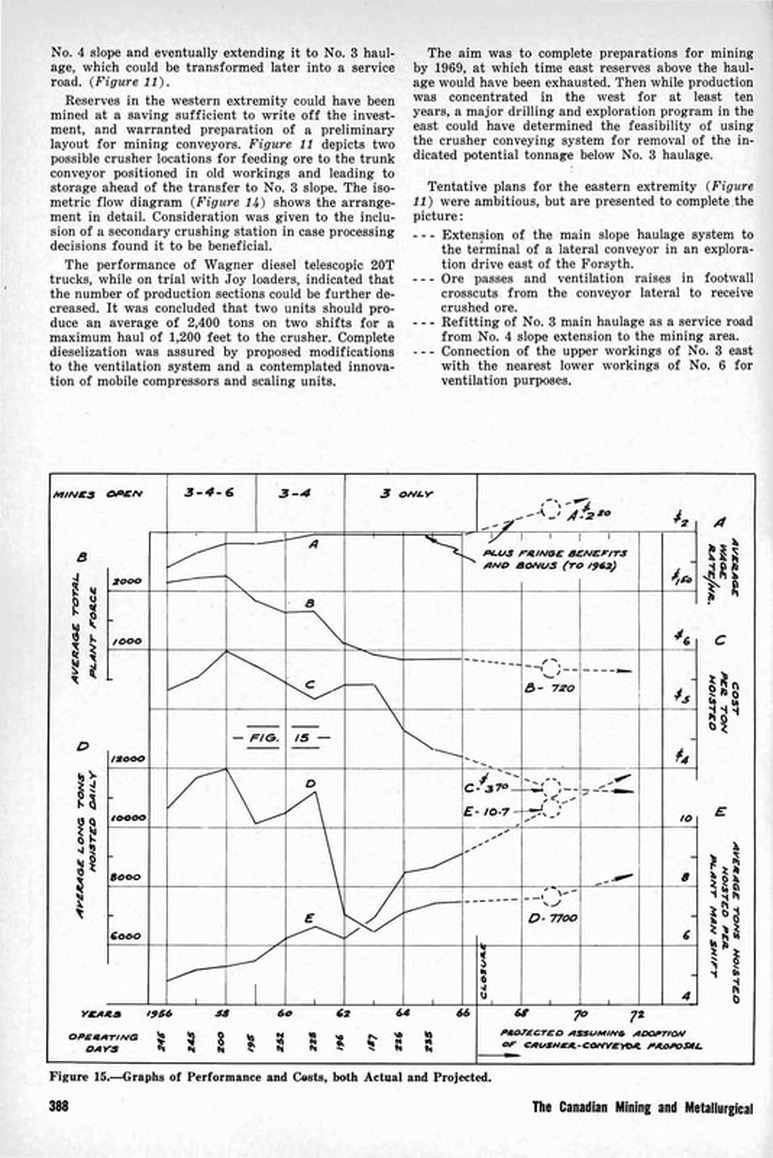 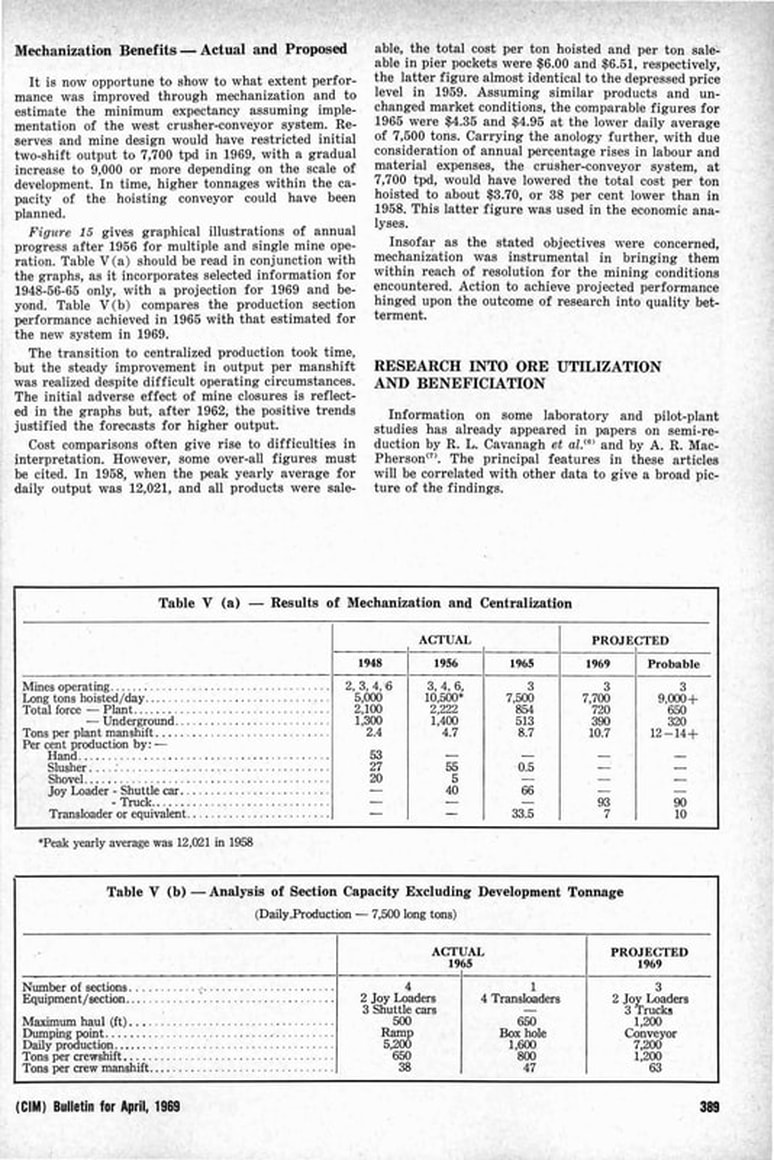 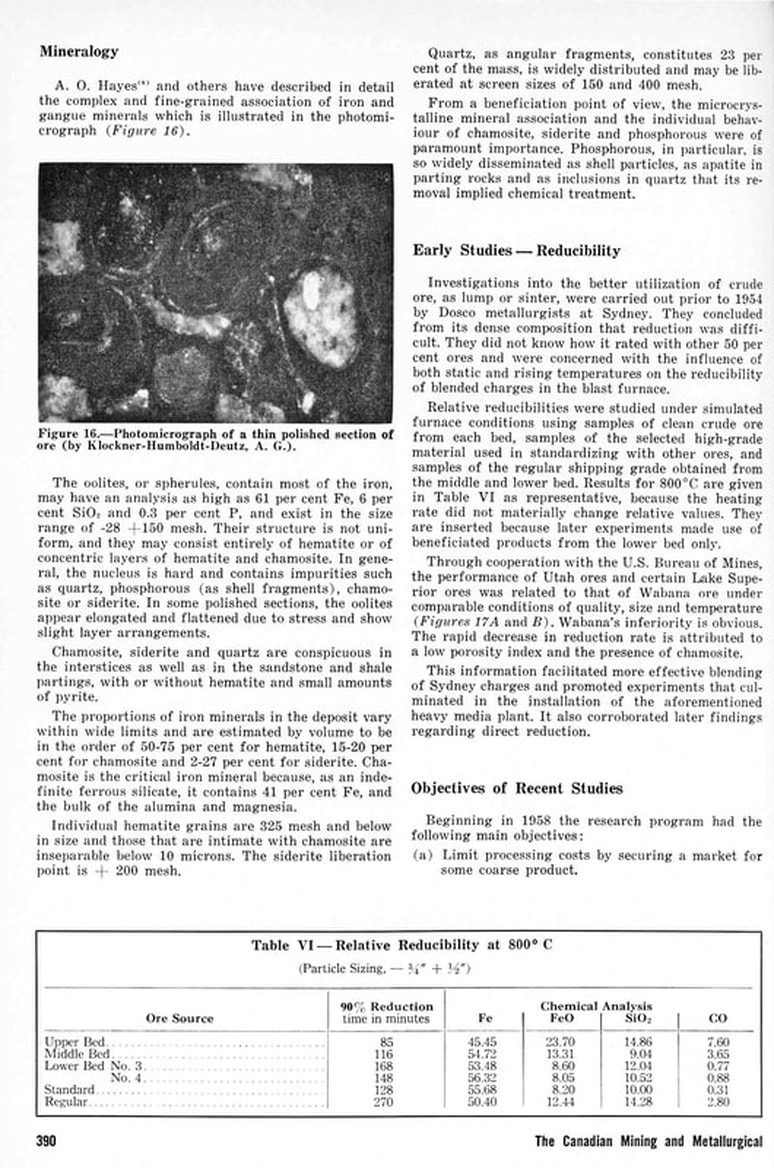 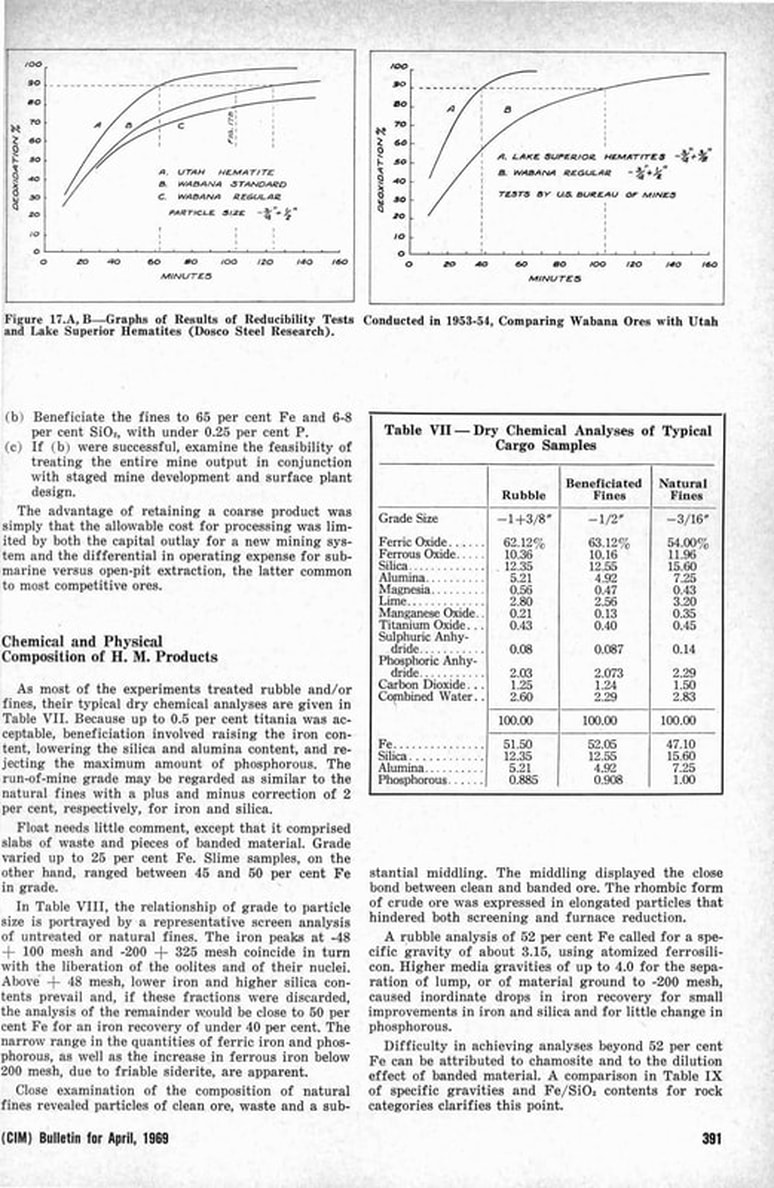 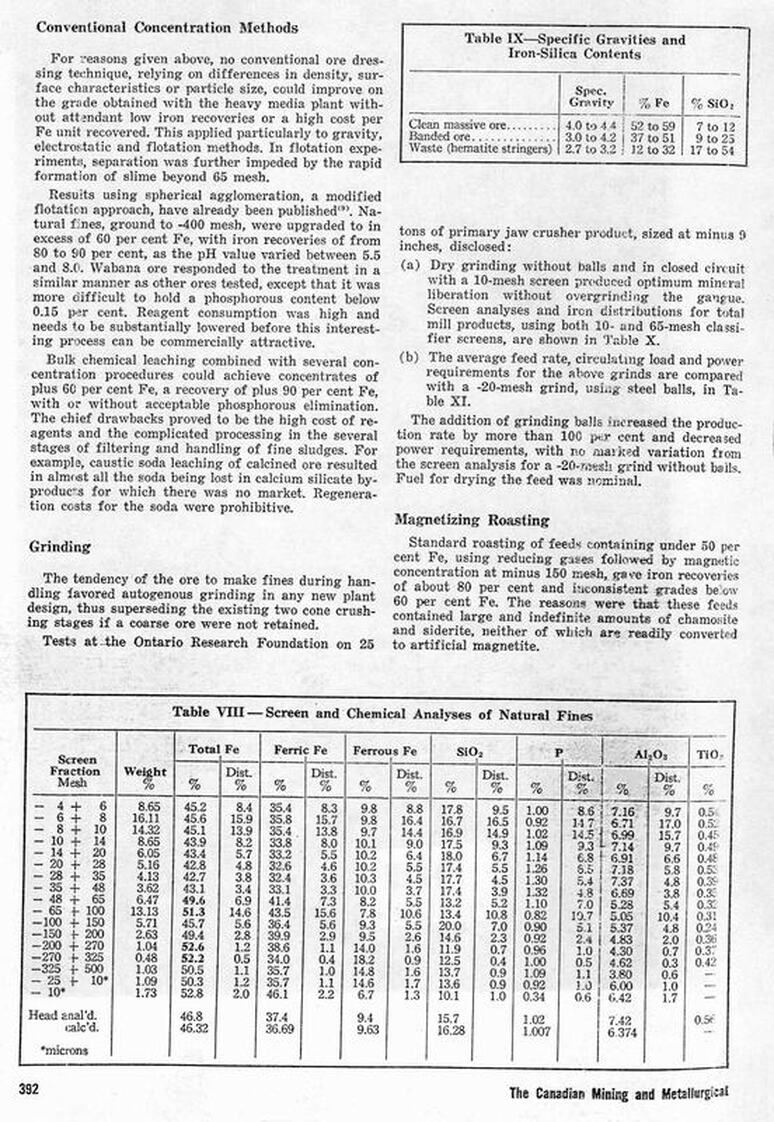 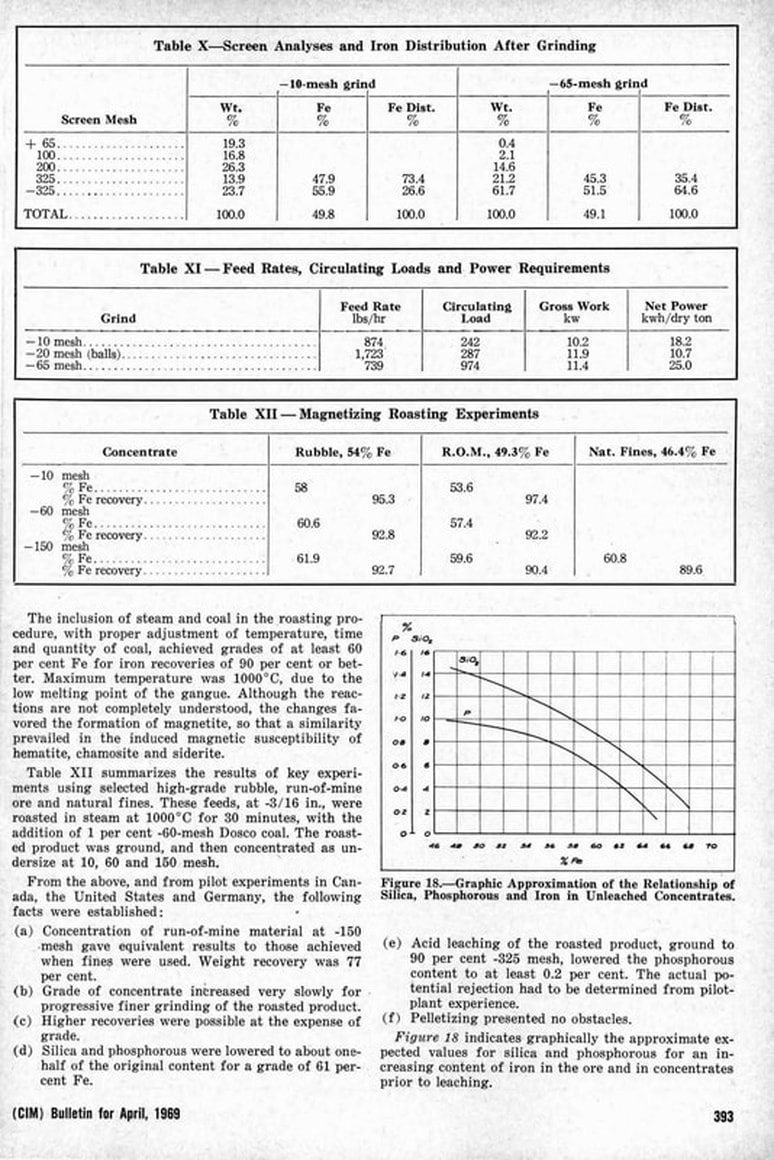 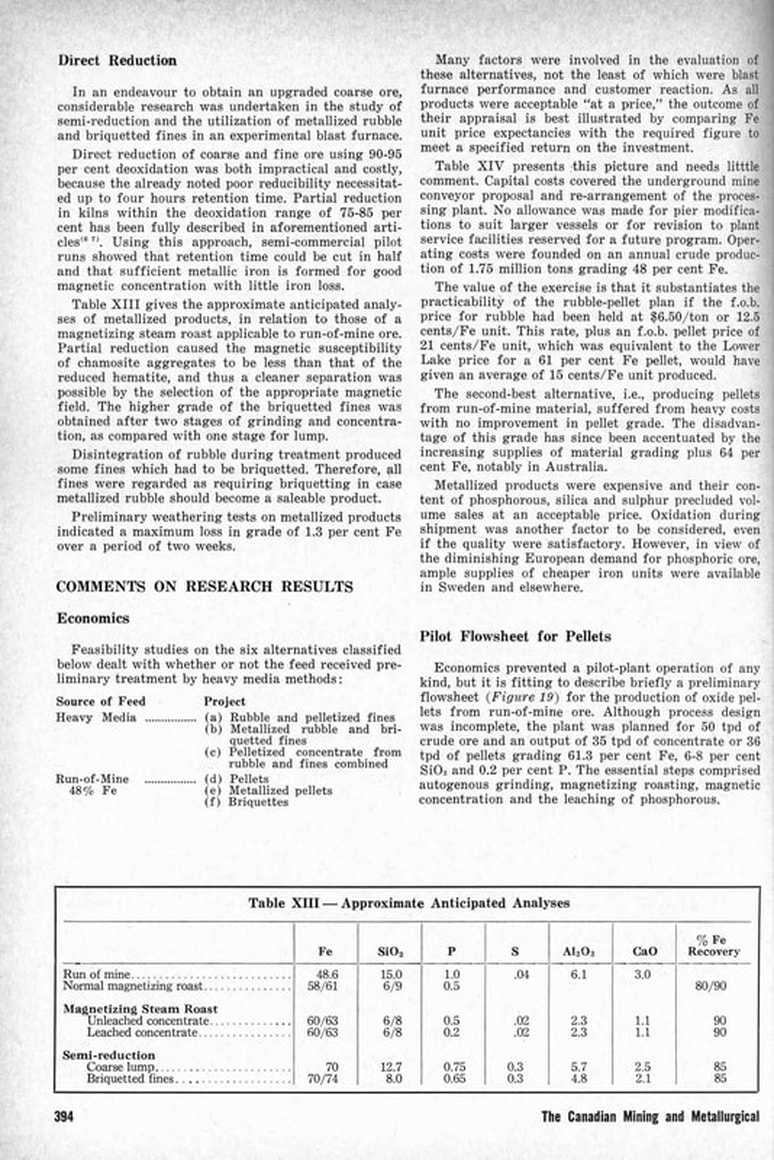 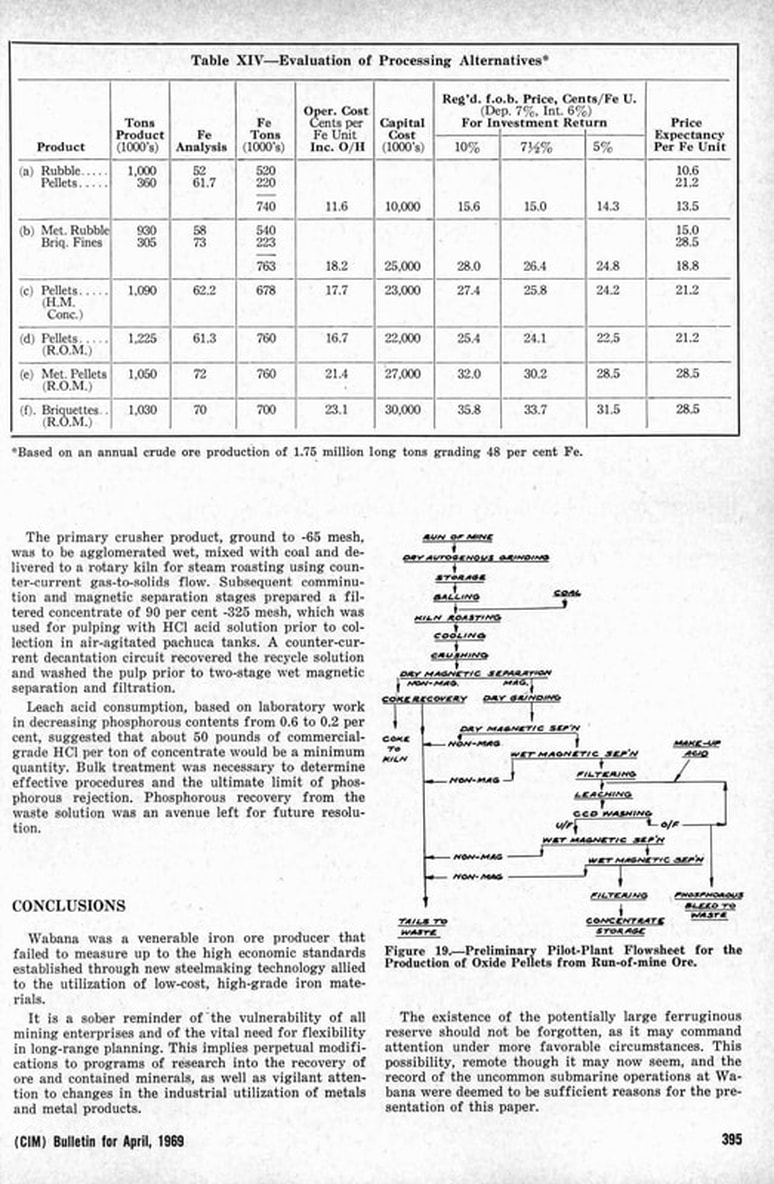 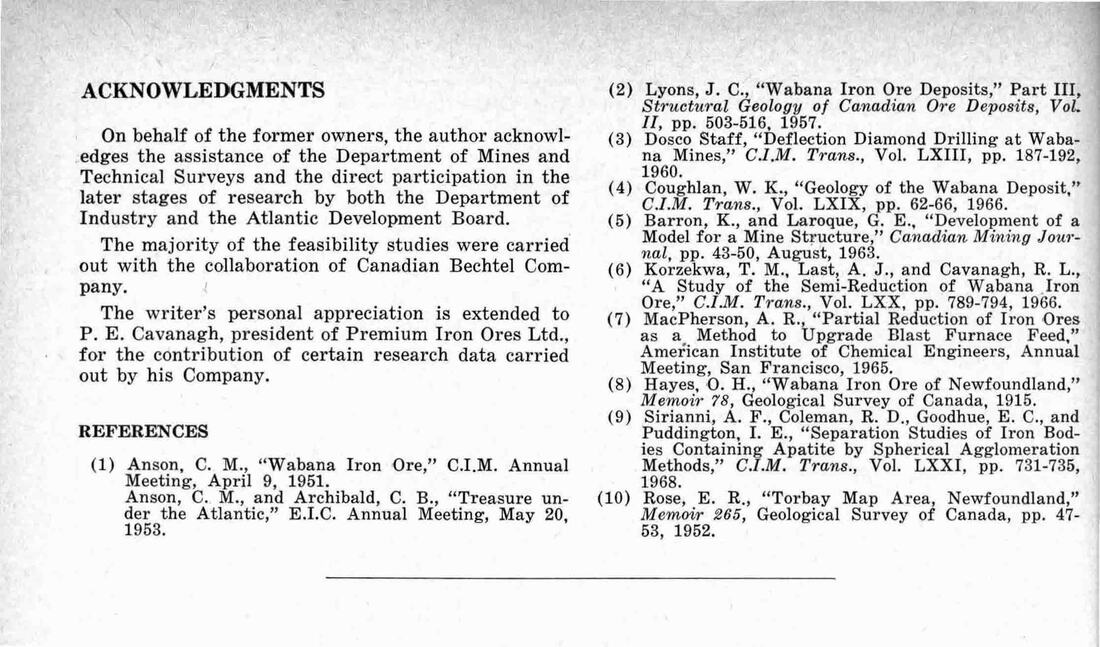