Please note: This article is incomplete. Information is being added on an ongoing basis.
ROMAN CATHOLIC SCHOOLS

The photo above shows the western section of the Green in February 1918. Just to the right of middle on the horizon, you can see the St. Peter's RC Hall that held the Gaiety Theatre with St. Peter's RC Church immediately east of it. Perhaps St. Peter's School was the 2-storey building just east of the church, or was it across the street from it? The school is believed to have closed in 1920 when Immaculate Conception Convent School opened on Town Square to accommodate the growing population of Roman Catholic children in the Mines area. The photo was taken by Alphonsus Lawton, brother of druggist Louis Lawton, and is courtesy of MUN A&SC.
​Very little specific information has been found regarding St. Peter's Roman Catholic School on the Green, such as precisely when it was built, its exact location, and what became of it when Immaculate Conception Convent School on Town Square replaced it. Following are some brief mentions of it in three sources:
"Newspaper History of Bell Island" compiled by Addison Bown;
Newfoundland Quarterly for October 1913;
Weavers of the Tapestry (the story of the Sisters of Mercy of Newfoundland), 2006, by Sister Kathrine Bellamy. Interestingly, Sister Kathrine did not refer to this school by the name "St. Peter's," nor did she mention St. Peter's Church or Church Hall on the Green [perhaps because they had both been in operation before the Sisters of Mercy arrived on Bell Island.] Instead, she makes reference to "the school at the Mines." I will give the references from these three sources in chronological order:

Bown: 1902, p. 16: On the occasion of the opening of Bell Island's first "high" school, which was located on Court House Hill, February 17, 1902, it was reported that, in his speech, the Superintendent of R.C. schools, Vincent P. Burke, complimented the people of Bell Island on their High School and "also their school at the Mines.” [This indicates that St. Peter's School was already in existence before 1902. St. Peter's Church Hall was built on the Green six years later in 1908; a year after that St. Peter's RC Church opened next door to it.]
Bellamy: 1919, p. 340-341: Shortly after the Sisters of Mercy began teaching at the Front, children from other parts of Bell Island began attending their school. "This meant a long walk for many children from the section of Bell Island called 'the Mines.' After a year or two of greeting small children who were tired out after such a long walk, the sisters questioned why they did not go to the students rather than have the students come to them...Beginning in 1919, in addition to teaching at the Front, the sisters took over the direction of the school at the Mines. Every day of the school year, two of the sisters travelled by horse and carriage across the 'Track,' from the convent to the Mines school." Travelling back and forth in an open carriage on the ore car tracks with "frequent exposure to rain, snow, sleet, and high winds, not to mention the effects of frequent immersion up to the neck in banks of snow" [no mention was made of the danger of riding on the ore car tracks, if that was what they were doing; perhaps they were riding alongside the track, which would still be a dangerous thing to do.] led the Mother Superior to suggest that the parish hire lay teachers who lived closer to the school during the winter months. "In fact, the Mines school had become too small to accommodate all the Catholic children of that section of Bell Island" so Father McGrath decided to build a new school at the Mines.

​Bown: 1930, p. 32: An article in the Daily News about the history of Rev. J.J. McGrath, Parish Priest on Bell Island,  says that the first school built under his auspices was the high school on Court House Hill, "then came St. Peter's School on the Green." The reverse seems to be true, however, as seen in the 1902 item above in which Vincent Burke mentioned the school at the Mines in his speech at the opening of the High School (below). [The 1930 article was the only one I could find that actually gives a name to that early "school at the Mines."]
Superior (High) School, Court House Hill, 1902 - c.1917.
Bell Island's first high school was built under the direction of Rev. J.J. McGrath. It opened at the top of Court House Hill on Feb. 17, 1902. The high school syllabus included a commercial course and the school was Bell Island's first centre for C.H.E. exams. This high school seems to have ceased operation shortly after the Sisters of Mercy arrived to begin teaching on Bell Island in September 1917. On Monday the 24th, Archbishop Roche celebrated mass at St. Michael's Church in honour of the arrival of the Sisters. "After mass, the congregation, clergy, parents and school children accompanied the Sisters in procession to the school where the archbishop blessed the former Superior School, renamed St. Edward's Convent School in honour of the archbishop's patron saint...Because St. Edward's School was so far away from the convent, Father McGrath decided that they should teach in St. Joseph's Hall [which was immediately to the west of St. Michael's Church] for the time being." [Source: Bellamy, p. 337.]

When the Island's first Catholic Cadet Corps formed on November 5, 1913, it was located in the Roman Catholic Superior (High) School on Court House Hill and flourished for 10 years before disbanding. [Source: Bown's "Newspaper History of Bell Island.]

The building was destroyed by fire on July 13, 1930. J.C. Cramm built a garage on the site shortly after that fire. 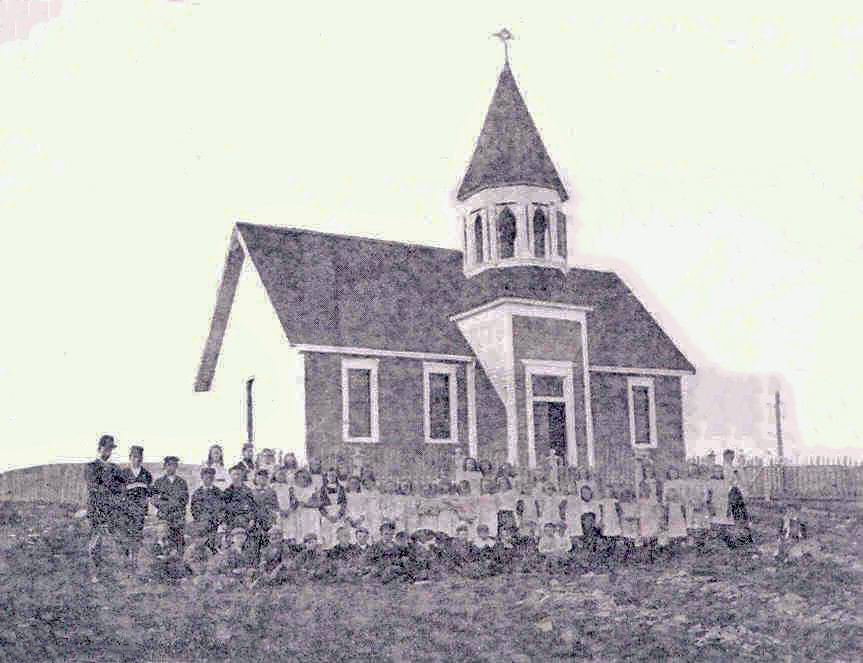 The photo above is from about 1902. In the painting(?) below, the road running vertically through the center is Old Front Road (now called Nish Jackman Drive). Branching off it towards the upper right hand corner is Court House Hill. I believe the building with the bell tower at the top on the horizon is the R.C. Superior School. Photo courtesy of Ray Rees. 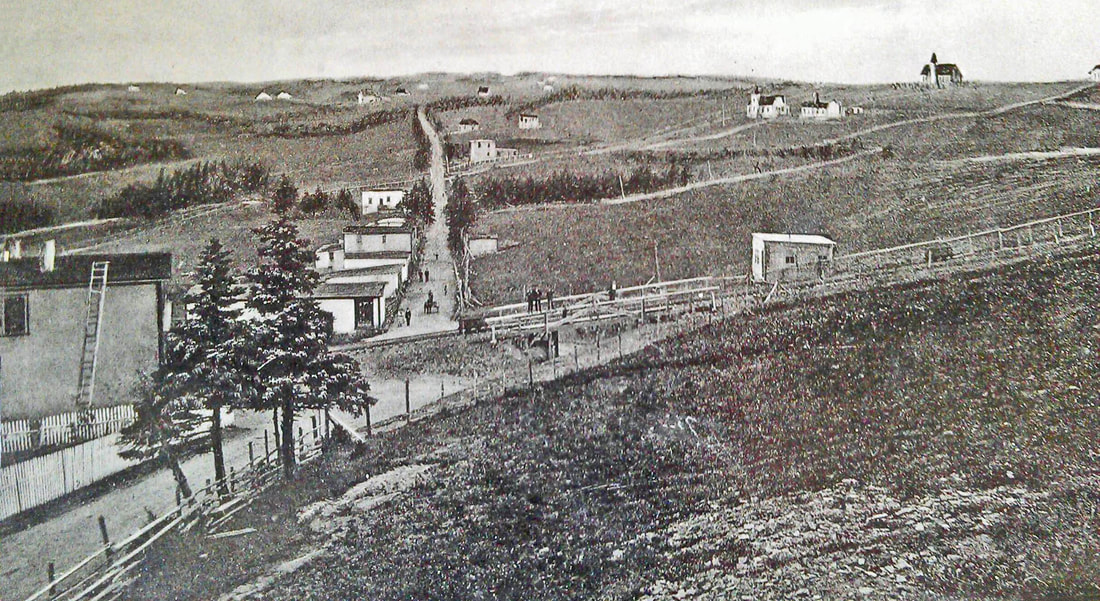 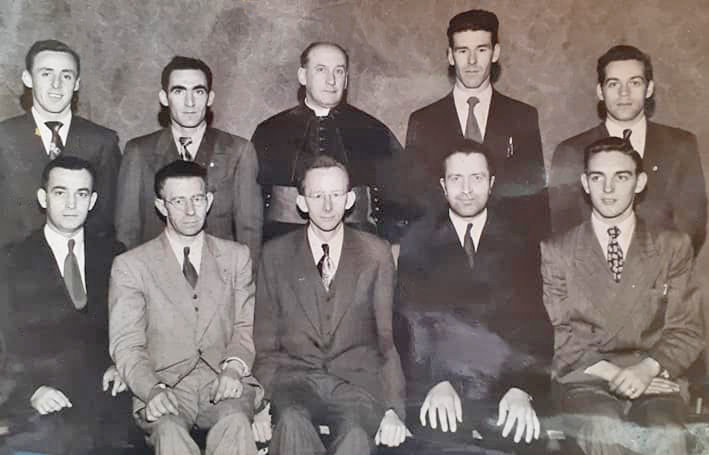 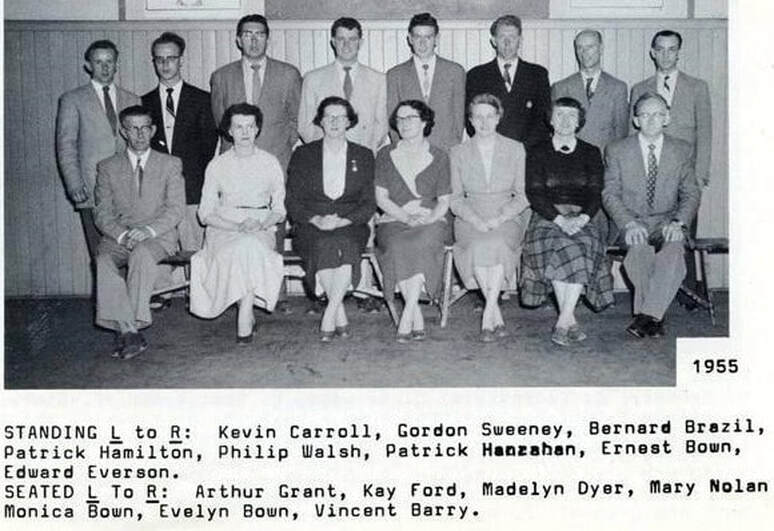