Pancake Day, aka Shrove Tuesday, is the feast day before the start of Lent on Ash Wednesday. Growing up in the mining days on Bell Island, this was a special food day. Unlike today when pancakes are a breakfast treat any day of the year, in those times, they were only served on this day, and were a main meal. The religious custom was to prepare pancakes to use up all the fattening ingredients (eggs, fat and milk) in the house before Lent so that people were ready to fast, as Jesus did during his 40 days in the desert. Objects that were said to predict future occupations were placed in the pancake batter. A coin symbolized future wealth, a pencil stub meant you would be a teacher, a holy medal meant you would join the clergy, a nail meant you would become a carpenter (or marry one), a button meant you would become a tailor.
​Lent is a religious observance in the Christian liturgical calendar that begins on Ash Wednesday and ends approximately six weeks later, before Easter Sunday. It is 40 days of reflection and preparation before the celebrations of Easter. During that time, Christians replicate Jesus Christ's sacrifice and withdrawal into the desert for 40 days. To represent his 40-day fast, children were encouraged to "give up" some favourite food, which seemed to be chocolate bars for most of us in 1950s Bell Island. The dime we would have spent on it was tucked into a cardboard folder each day of Lent and then passed in at church at Easter. Our "reward" for this was a chocolate Easter egg on the big day. We would get up on Easter morning and run to the window to see if we could catch a glimpse of the Easter Bunny, aka Peter Cottontail. If there was new snow down, we would scan for tell-tale rabbit footprints in the snow. The chocolate egg was often in a little Easter basket, but sometimes in a ceramic ornament. I got the elephant one below when I was 9 or 10. 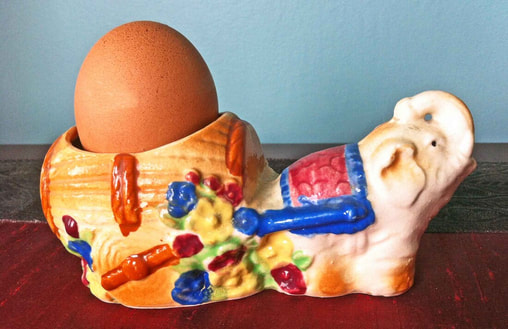 Before Lent started though, there was Shrove Tuesday, more commonly known as Pancake Day, which is the feast day before the start of Lent on Ash Wednesday. It is not a public holiday. It was the custom to prepare pancakes to use up all the fattening ingredients (eggs, fat and milk) in the house before Lent so that people were ready to fast. Objects that "predicted" future occupations were placed in the pancake batter. A coin symbolized future wealth, a pencil stub meant you would be a teacher, a holy medal meant you would join the clergy, a nail meant you would become a carpenter (or marry one), a button meant you would become a tailor.

​Good Friday is the Friday preceding Easter Sunday. It commemorates the crucifixion of Jesus on the cross at Calvary. It is a statutory holiday in Canada. It is celebrated with church services and the eating of fish.

Easter is celebrated the first Sunday after the first full moon in spring (after March 21st), which can occur as early as March 22 and as late as April 25. It commemorates the resurrection of Jesus from the dead. It is a shop-closing holiday in Newfoundland. Easter, the day Christ rose from the dead, is the culmination of the Lenten season.
On Bell Island in the mining years, everyone went to church on Easter Sunday morning. If you were a lucky girl, you had a new spring coat and hat to show off, and you wore them even if the weather was still in winter mode! There was no happier time than to be walking to church in your new outfit on a sunny Easter morning. I don't have a family photo to suit the occasion, so I cropped a Tom Careless photo of the July 1st Memorial Day service, where you can see half a dozen girls and women sporting their Sunday-best hats and coats, no doubt bought at Easter. I remember well the little bandeau hats seen on a few here. 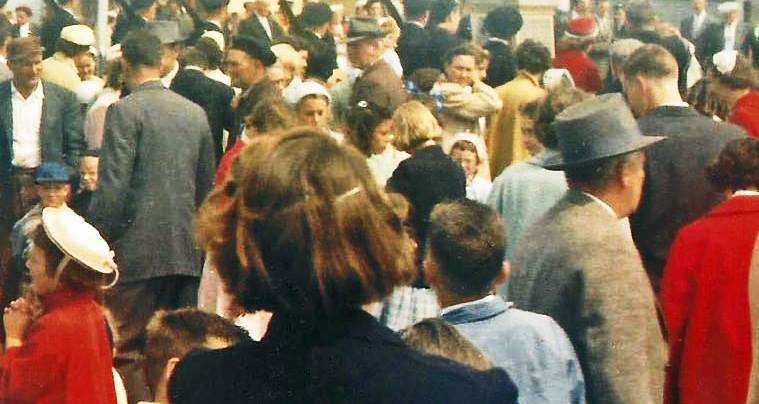 The photo below left is courtesy of Bonnie Highmore Kyle, seen here with her cousin, Ruby, one Easter morning in the 1950s. Ruth Archibald provided the photo on the right of her and her brother, Jamie, c.1958. All are dressed head to toe in new spring outfits. All girls and women wore hats to church back then.
​Some excerpts from the Daily News regarding Easter celebrations on Bell Island over 100 years ago:
​
In 1901, Miss K.I. White, sister of Rev. Fr. White, was training the RC choir in March and planned to present the first operetta on the Island in Easter week. The name of the operetta was "Cinderella" and it was performed 3 times to full houses, realizing a large amount for the school.