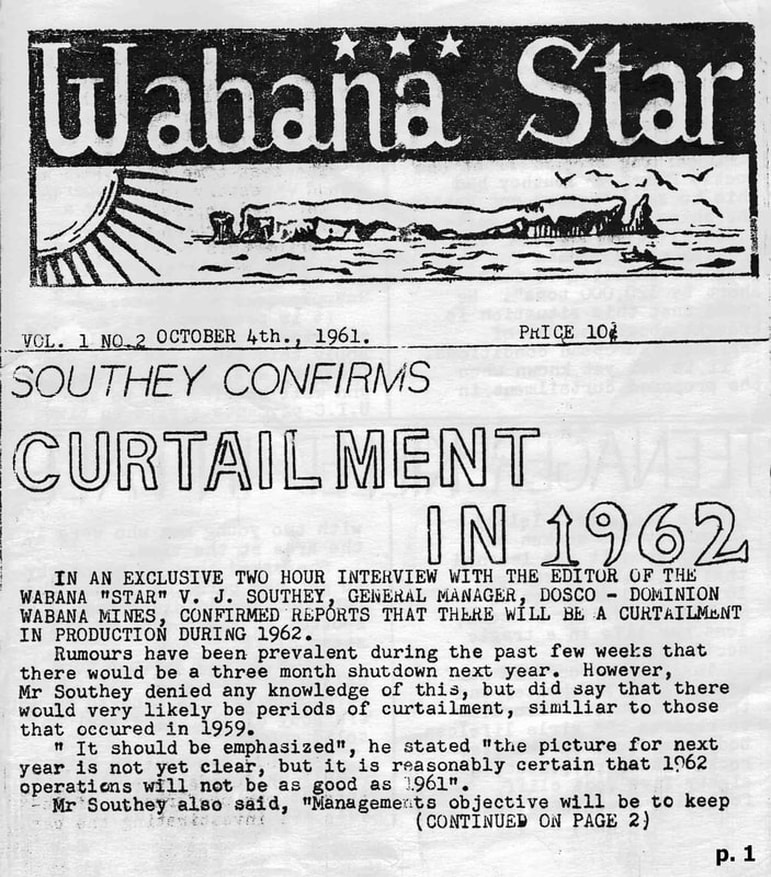 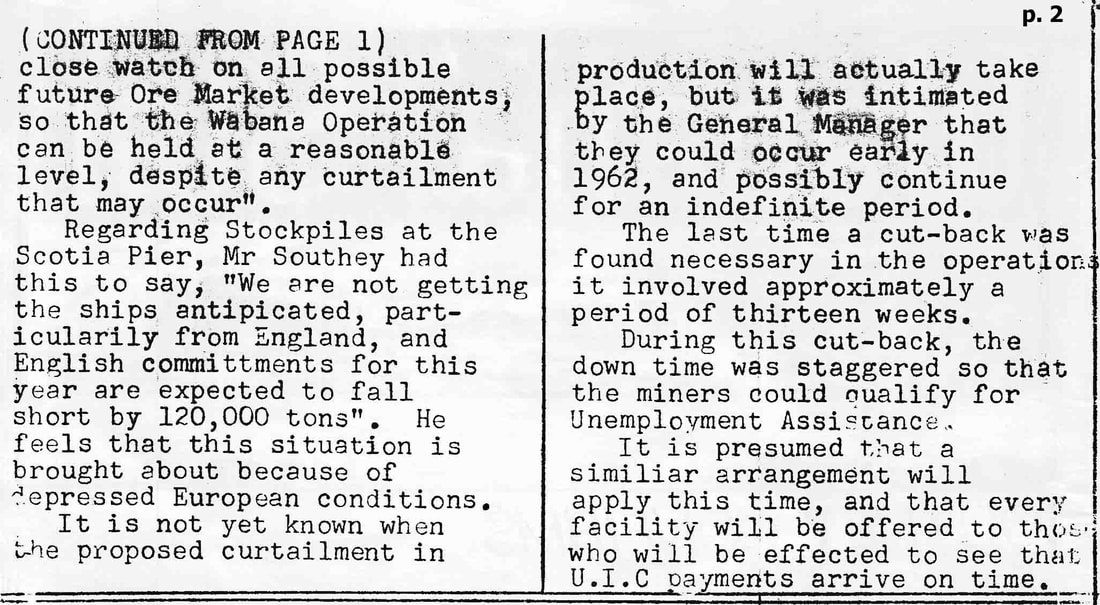 Mr. Fred Lukens, Mining Inspector, Department of Mines and Resources, was on Bell Island recently making his annual inspection of numbers 3 and 4 Slopes.

Safety, ventilation and operation of machinery are the main points covered in this type of inspection, and Government standards have to be met in all cases.

Mr. Lukens has been coming to Bell Island for several years on this type of work, and many improvements to the operation have resulted from his recommendations.

Apart from annual visits to the local mining operation, Government inspectors are required to examine the scene of serious accidents. 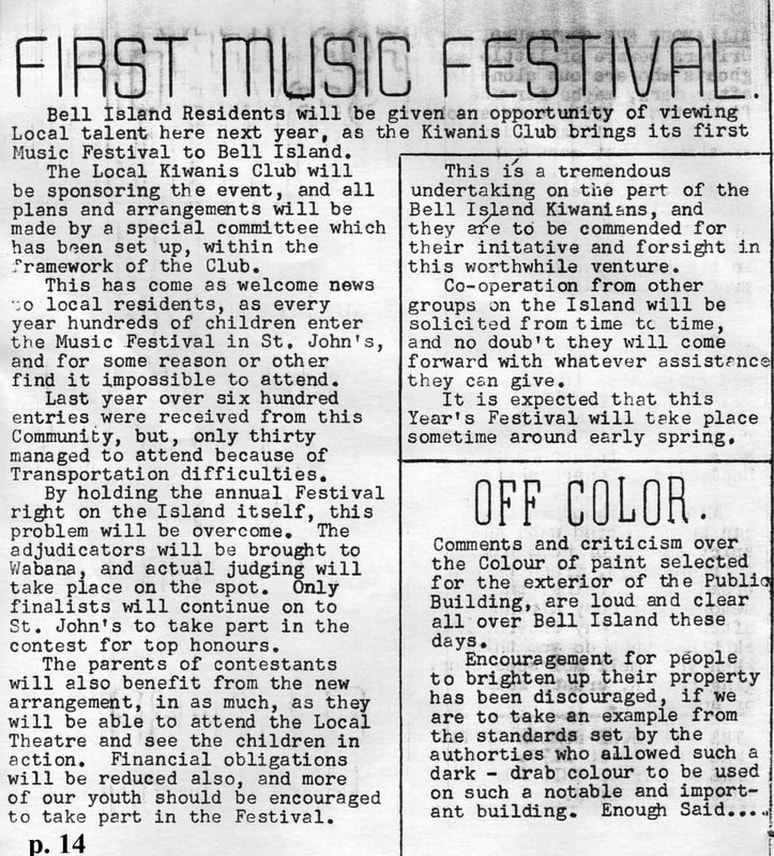 Mrs. Rosie Sapp arrived home last week from a three-month vacaton with her brother and other relatives in Halifax and Yarmouth, N.S.

Miss Madeline McLean, R.N., is presently on her annual vacation in New York, and other American cities.

A 'Kitchen Shower' was held last Thursday evening for Mrs. Bernard Hawco at the residence of her mother, Mrs. Meadus, West Mines. Mrs. Hawco was delighted with many useful gifts received.
From page 18:

Donald Bursey, son of Mr. and Mrs. Everett Bursey, and a member of the U.S. Air Force, has been assigned to duty at Houma, Louisiana.

Don, who recently signed for a second four years with the U.S. military forces, is now stationed at Redcliff Radar Station, not far from St. John's.

The 22-year-old radio technician is married to the former Jenny Parsons of Salmon Cove.

Mr. and Mrs. Bursey will be spending two or three weeks visiting relatives and friends on Bell Island and in Salmon Cove this month. They will motor to Houma and will be at their new home about the middle of November.

Ron Cobb, son of Mr. and Mrs. Albert Cobb, East End, has joined the Canadian Army. He will be leaving shortly for training camp.
From page 22:

Congratulations to Wm. Rees on the opening of his new Service Station. Imperial Oil Limited. Always look to Imperial for the best.
From page 25:

The importance of Wabana Ore on the World Markets was emphasized last week when a group of prospective Trade Commissioners for Canada saw fit to include Bell Island in their tour of Canada.

Their visit was a part of a two year training programme that will qualify them to act as Canada's Trade representatives in all parts of the World.

During the one-day visit here, they were taken underground in No. 3 Slope by DOSCO Officials, and also toured the Surface operations. At noon, the Company played host to the guests at the Bell Island Curling Club.

The group returned to the City on the afternoon ferry, and will continue their tour of Nfld. and Labrador during the next few weeks.

In March of next year, they will graduate from the University of Ottawa, and will be immediately assigned overseas to serve in the interest of promoting Trade. 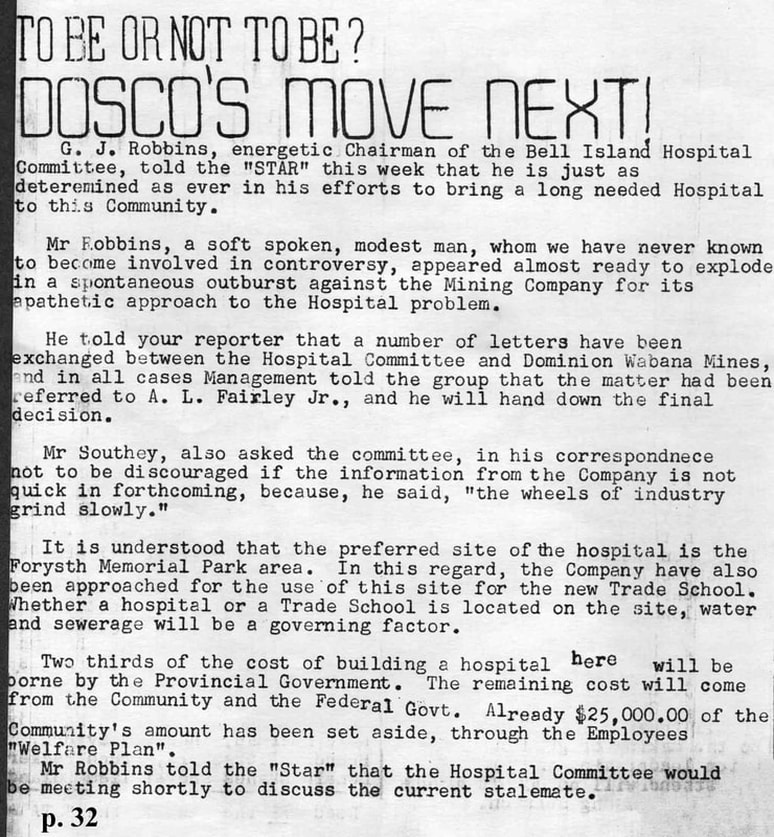 Rev Costigan, Chief Chemist, Dominion Wabana Mines, received word recently that his name has been accepted as a member of a Royal Commission set up to investigate Trucking in Newfoundland.

The announcement of his appointment came from none other  than the Honourable J.R. Smallwood himself. Mr. Smallwood informed Costigan early last month that he had been named to the five-man Commission.

Under the Chairmanship of Mr. Arthur Johnson, Deputy Minister of Economic Development, the Board will make a careful study of Transportation by motor truck in this Province.

The three preliminary Public Hearings of the Royal Commission were held in the Sir Robert Bond Memorial Auditorium, Confederation Building, September 27th, 28th, and 29th. It is expected that during the hearings, the Bell Islander will be away from home for several weeks.

Earlier this year, Costigan was scheduled to retire but, shortly before the deadline, he was granted an indefinite extension of time, and will now continue his duties in charge of the Lab for some time to come.

Mr. Francis Gosine, member of the Local Branch of Kiwanis, was on the Mainland recently attending the O.Q.M. District Convention of that Organization.

This year's Convention was held at Quebec City, and Mr. Gosine reports a splendid time was had by all those who attended. Next year, the Convention will be held in Ontario. 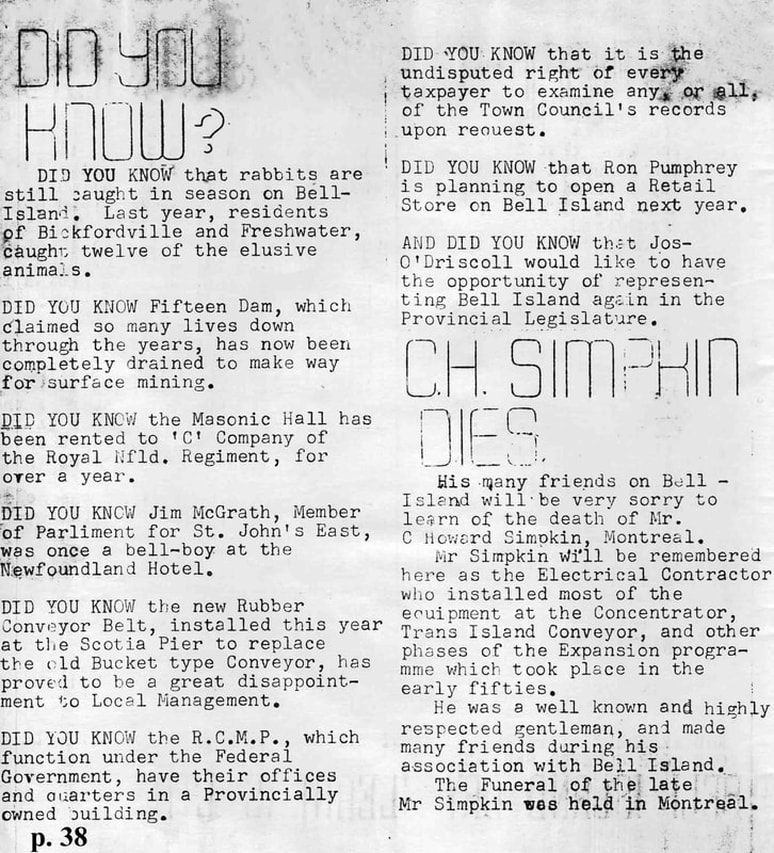 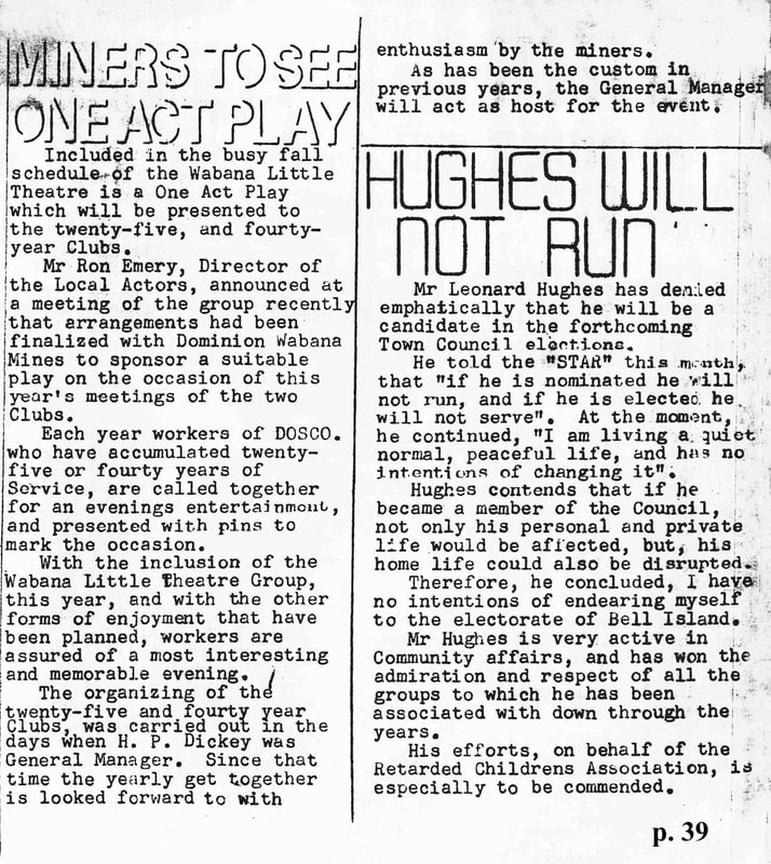 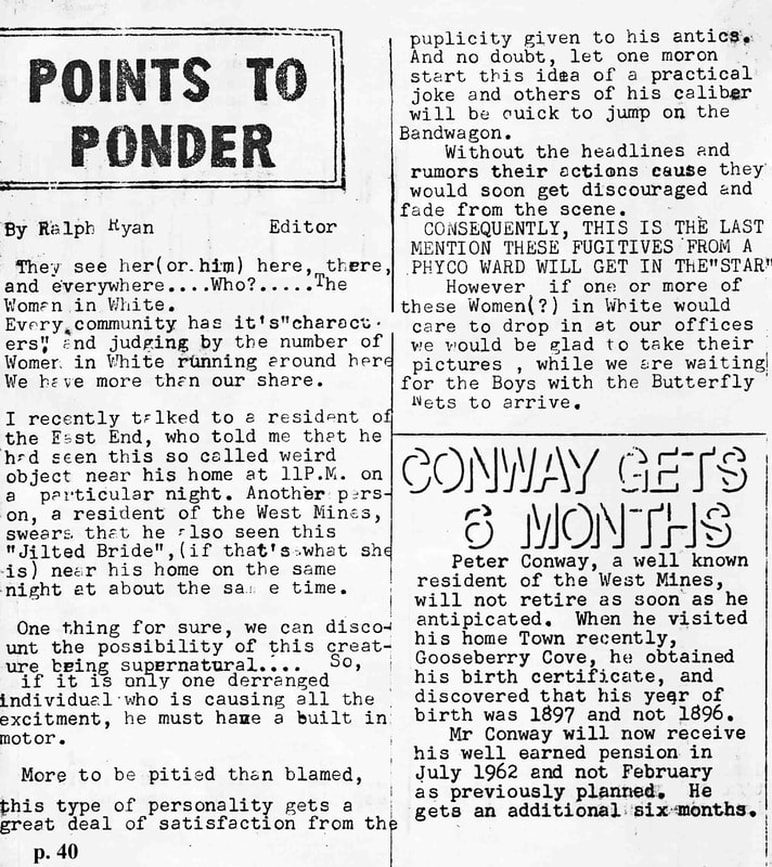 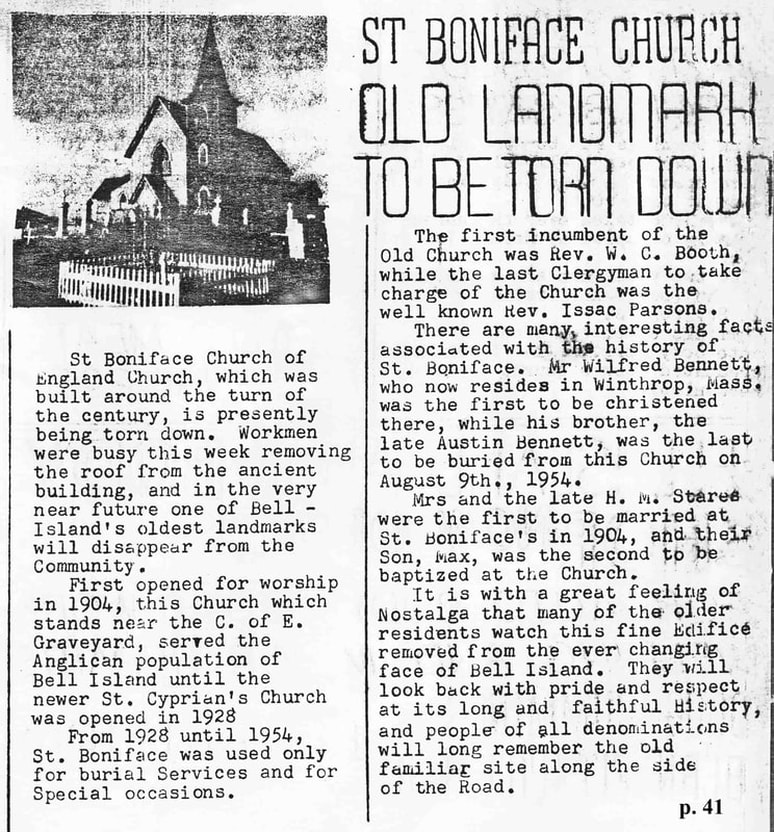 They have taken over the garage formerly occupied by Norman Tarrant Jr.

The two young men are graduates of the Vocational Training School in St. John's. 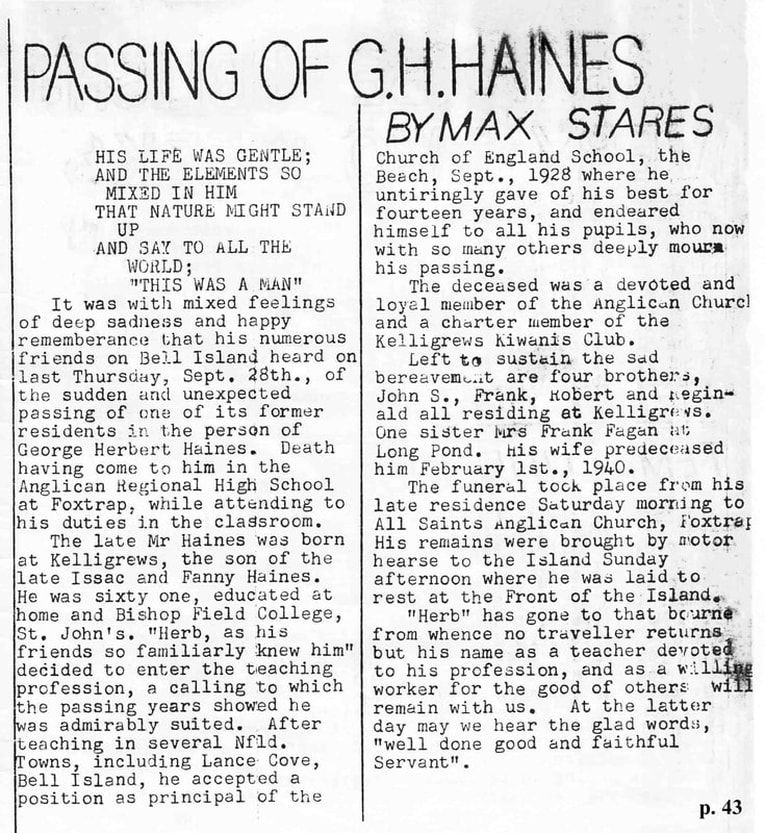