PUBLICATIONS
ISAAC C. MORRIS
​Isaac C. Morris (1857-1937): St. John's businessman, politician, writer and public speaker. He was born in St. John's, where he operated a sail-making business and served on the Municipal Commission and the city Council. He was a prolific writer for the St. John's newspapers on the social and political issues of the day, and it was in this capacity that he became "one of the important people in Bell Island's history never to have lived there." There were no newspapers published on Bell Island in the first few decades of the iron ore operations, and no newspaper correspondents living on Bell Island to report on all the mining and other activity going on there. Morris liked to travel outside St. John's on summer weekends and holidays, visiting communities and chatting with locals about their history and culture. You might say he was an early folklorist because he would make note of who he met and what they told him. When he returned home, he would write up these experiences for publication in the St. John's periodicals. He visited Bell Island on at least 5 occasions between 1897 and 1911 and reported in The Daily News on the mining activity and social life, and changes he had observed over that time period. There is an uncredited article entitled "Bell Island" in the first edition of The Newfoundland Quarterly, July 1901, which, judging by the writing style, may have been written by Morris. 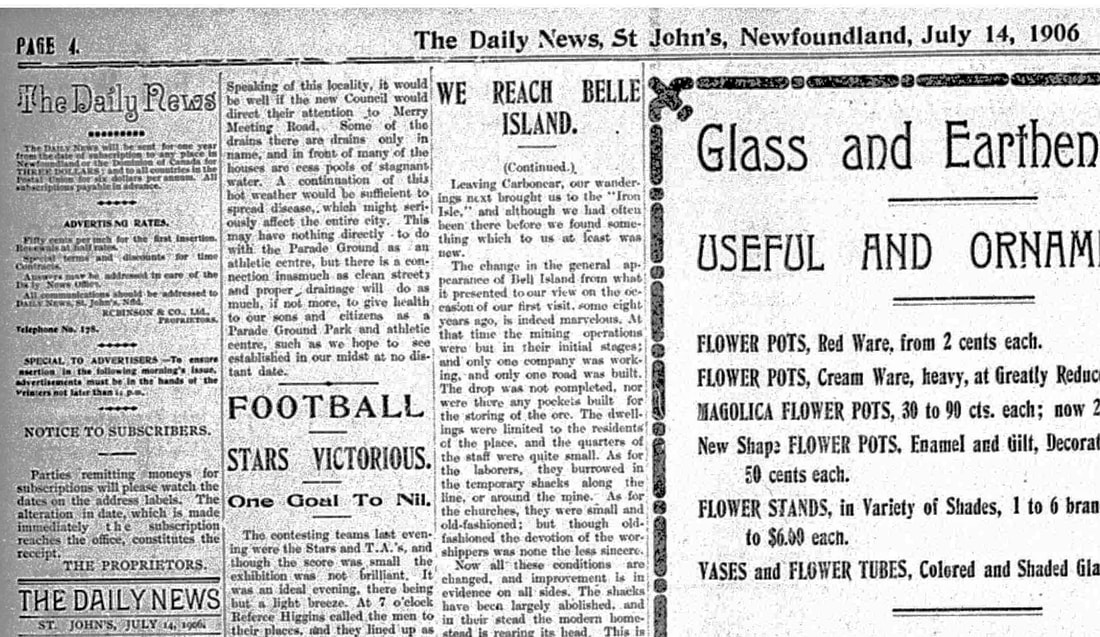 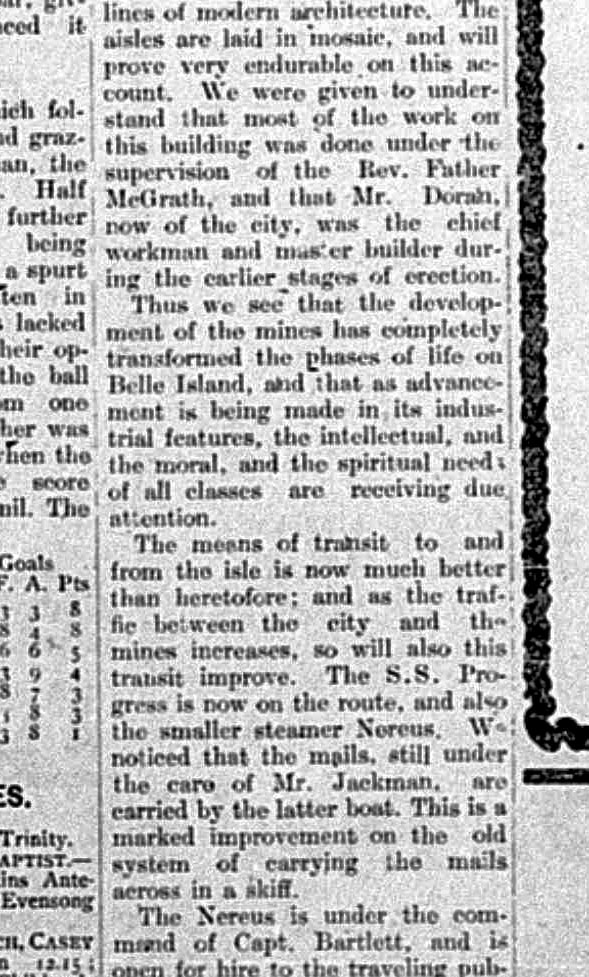 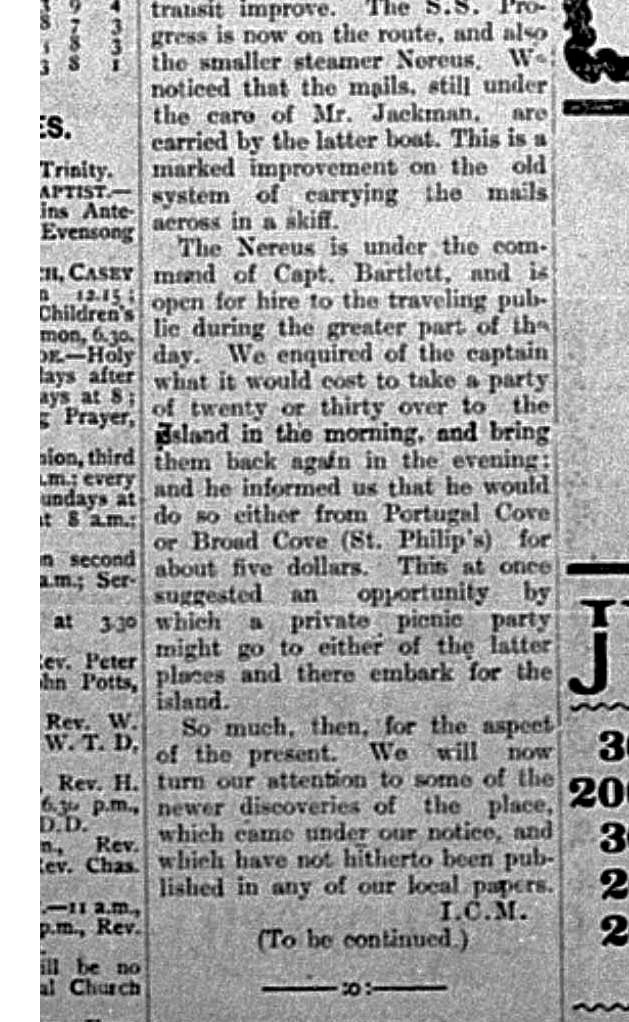 The next image is from The Daily News, July 16, 1906, p. 4. It is too blurry to read. That is because the scan that was done for the microfilm of the newspaper was blurry. I have included it here to remind myself of that so that I do not waste time looking at the microfilm again. Below this blurry image, I have posted what was printed in the original newspaper article of July 16th and also the 17th (as I do not have a scan of the original newspaper for that day either). 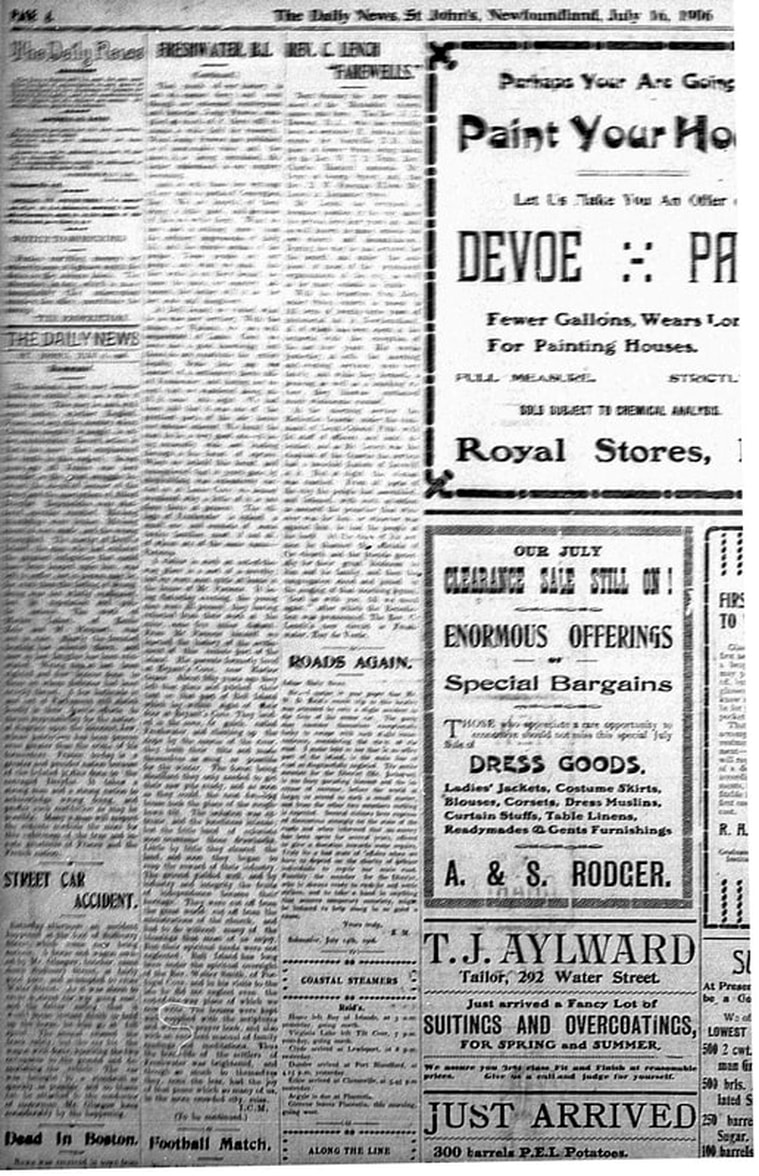 "At Bell Island, we visited what to us was new territory. With the mines, or Wabana, we are well acquainted; of Lance Cove we have also a good knowledge; but these do not constitute the entire locality. Some time ago, we learned of a settlement there called Freshwater, and during our recent visit we wandered along until it came into sight. We had been told that it was one of the prettiest parts of the Isle; hence our intense interest. We found the road to be a very good one, it being unusually wide and leading through a fine forest of spruce. When we beheld this forest, and remembered that in years gone by shipbuilding was extensively carried on at Lance Cove, we almost wondered why a little of it is not done there at present. The village of Freshwater is indeed a small one, and consists of some 12 families, most if not all of whom are of the same name: Parsons.

"A visitor in such an out-of-the-way-place is sort of a novelty; but we were soon quite at home in the house of Mr. Parsons. It being Saturday evening, the young men were all present, they having returned from their work at the mine some five miles distant. From Mr. Parsons himself we learned the history of the settlement of this remote part of the Island. His parents formerly lived at Bryant's Cove near Harbour Grace. About 50 years ago, they left that place and pitched their tent on that part of Bell Island which lay within sight of their door at Bryant's Cove. They landed in the cove, or gulch, called Freshwater and, climbing up the slope by the course of the river, they built their tilts and made themselves as snug as possible for the winter.

"The forest being abundant, they only needed to get their saw pits ready and, as soon as they could, the neat dwelling house took the place of the rough-hewn tilt. The isolation was extreme, and the loneliness intense, but the little band of colonists soon overcame their drawbacks. Little by little, they cleared the land, and soon they began to reap the reward of their industry. The ground yielded well and, by industry and integrity the fruits of independence became their heritage. They were cut off from the great world; cut off from the ministrations of the church, and had to do without many of the blessings that most of us enjoy. But their spiritual needs were not neglected. Bell Island has long been under the spiritual oversight of the Rev. Walter Smith of Portugal Cove and, in his visits to the Isle, he did not neglect even the out-of-the-way place of which we now write. The houses were kept well supplied with the scriptures and with the prayer book, also with an excellent manual of family readings and meditations. Thus the home-life of the settlers of Freshwater was brightened and, though so much to themselves, they none the less had the joy of that peace which so many of us in the more crowded city miss.

"In the course of events, the path became smoother, and with years came the younger families and the additional homesteads. A comfortable living has always been made, and now that the mines are in operation, the chances are all in favour of still better prospects. The mines are a boon to the rising generation and now, instead of having to seek afar for employment, it is found at their very doors. Of the different persons to whom I spoke, all spoke in praise of the benefit of the mines. A lad of 16 told me that he earned $1.20 a day, and another of 14 that he was getting 8 cents per hour. This, with the scarcity of men, which necessitates overtime, makes the monthly pay quite a snug item. All the young men of Freshwater are doing well at the mines, and with the splendid lands, and thickly wooded forests at their disposal, the outlook is greatly in their favour.

"It is at this point of the Isle that the Bell is to be seen to advantage." He then went on to tell a daring tale of John Butler of Topsail climbing onto the Bell Rock at the west end of Bell Island. Addison Bown, in his "Newspaper History of Bell Island," introduced Morris' story of the scaling of the Bell Rock with a little commentary of his own: "The isolated Bell Rock at the north-western corner of the Island, which is as high as the Island itself and gives it its name, was conquered by John Butler of Topsail in an ingenious manner. It is separated from the Island by a chasm several hundred feet across. Around its base, the restless sea chafes unceasingly or dashes in spray against its smooth, sheer sides, which taper outward to form an inverted bell, whose summit is higher than the Island itself. Only once in recorded history has a human being set foot on the Bell Rock, where countless seabirds make their nests and rear their young in the security of that remote fastness. He was a brave man named John Butler of Topsail.

"To climb this rock is almost, if not entirely, an impossibility; but it has been done by one man at least. This was Mr. John Butler of Topsail. The means used by Mr. Butler were very risky, and only a man of strong nerve could accomplish such a feat. In company with his respected father and other members of the family, he sailed over from Topsail and climbed to the top of Bell Island proper. From that point, they fired a rocket, to which was attached a strong line; this was carried right over the chasm between the two heights, and further on across the top of the Bell Rock, and then it fell into the landwash below. A cable was then fastened to the line and well secured on the Bell Island side. The party then returned to their boat and rowed off to the beach at the base of the Bell Rock, and they hauled in on the line and secured it in such a manner as made it safe for a man to crawl across the cable on to the top of the Bell Rock. John Butler then returned to the Island and made his way hand over hand across the gulf, 200 feet above the water to the top of the Bell Rock. The object of this undertaking was to procure guano and test its market value. This feature of it was not a success, as the labor entailed in retrieving the guano was in excess of any reasonable figure. [Gail's Note: Guano is the accumulated excrement of seabirds, which is a highly effective fertilizer with exceptionally high content of the nutrients essential to plant growth. In the 19th-century, guano trade was quite lucrative. Being farmers, the Butlers no doubt sought this fertilizer for their farms in Topsail, but they probably also hoped to sell any they did not need, if harvesting it proved to be a feasible task.]

"While walking near the village, our attention was aroused by the material used as a top dressing for the road. The moment we trod upon it, we felt that there was something more than ordinary gravel under our feet. From enquiry we learned that it possesses large mineral qualities and that upon that very day some English experts had been over the ground with the Rev. Father McGrath and had taken away several samples of this very material. All this tends to show that the mineral resources of Bell Island are very great, and that if developments continue, the place will yet become even a greater line of industry than the most enthusiastic of us have dreamed of. Having finished our enquiries, and having been kindly received by the people, we left for our lodgings at Wabana feeling that we have added to our knowledge of our country."
The next 2 images are from The Daily News, July 18, 1906, p. 7. 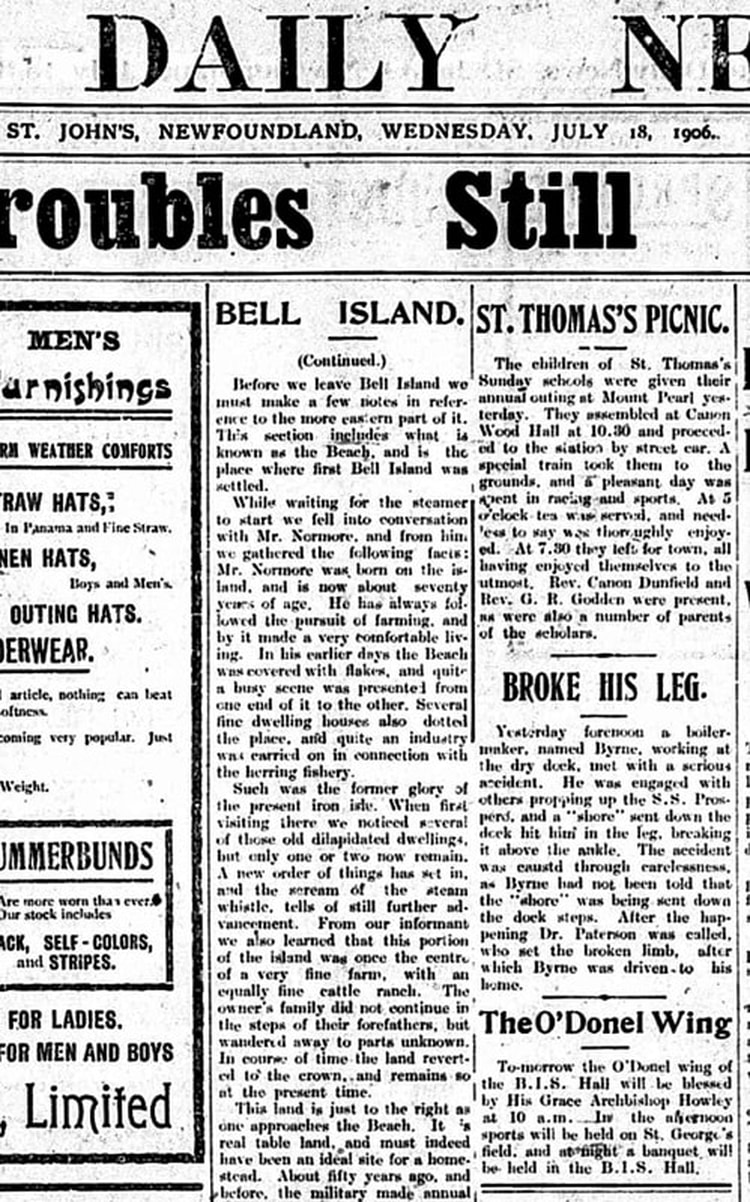 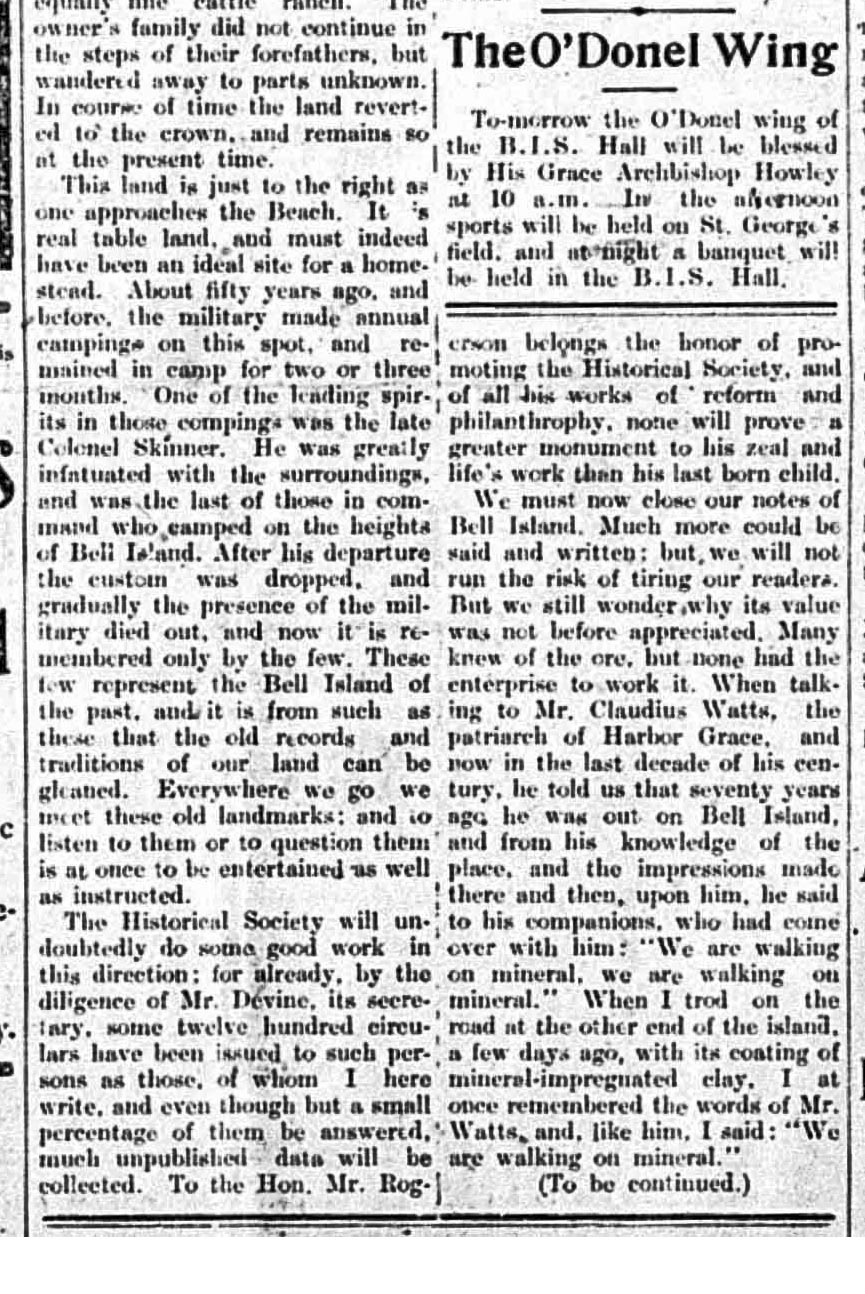 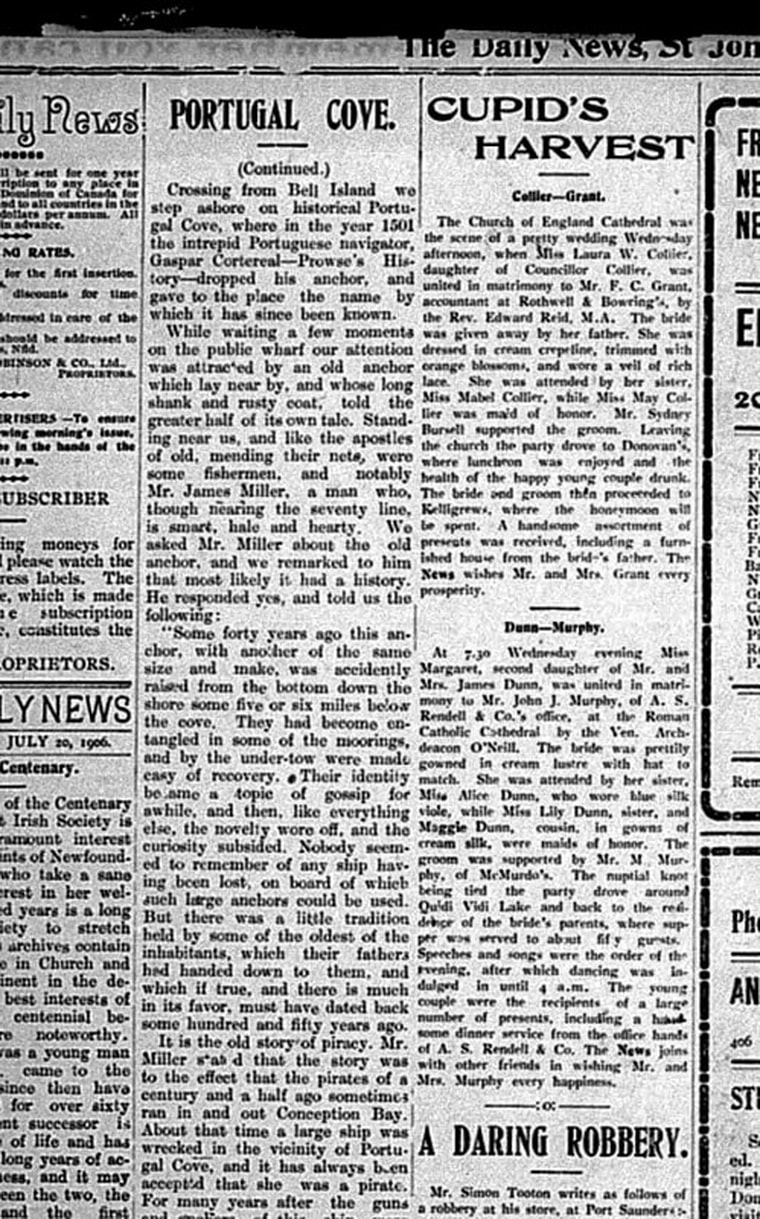 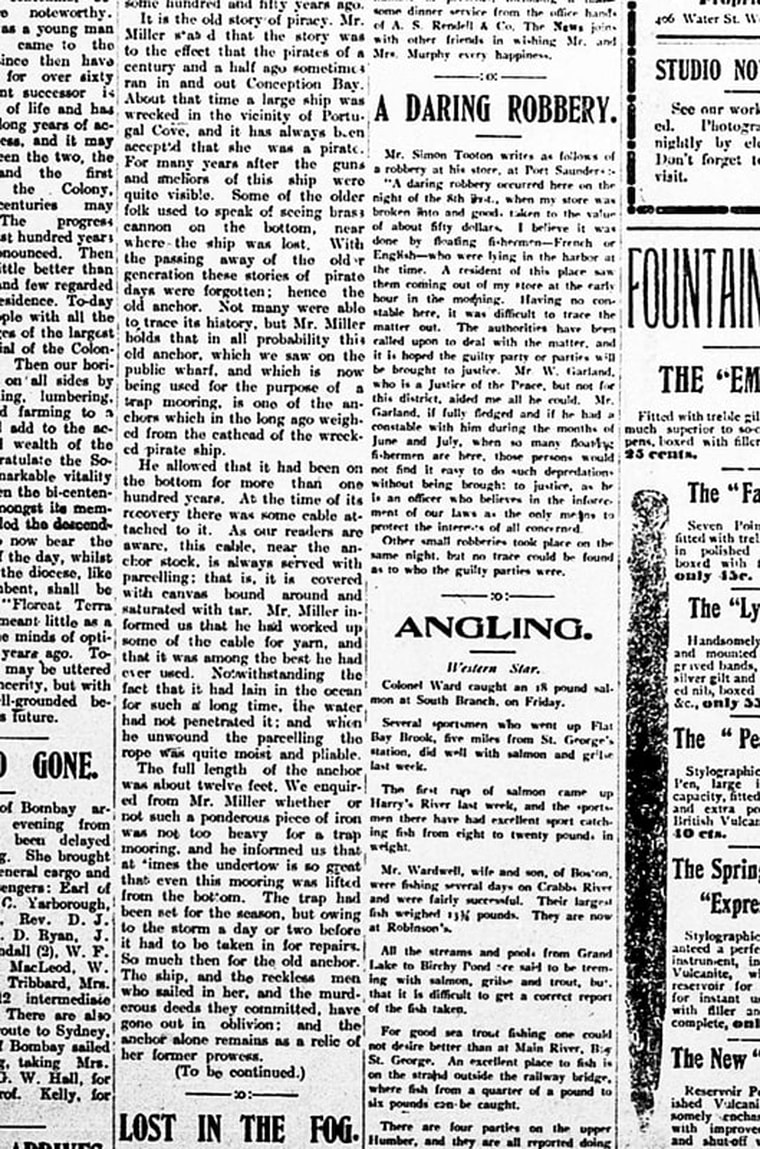