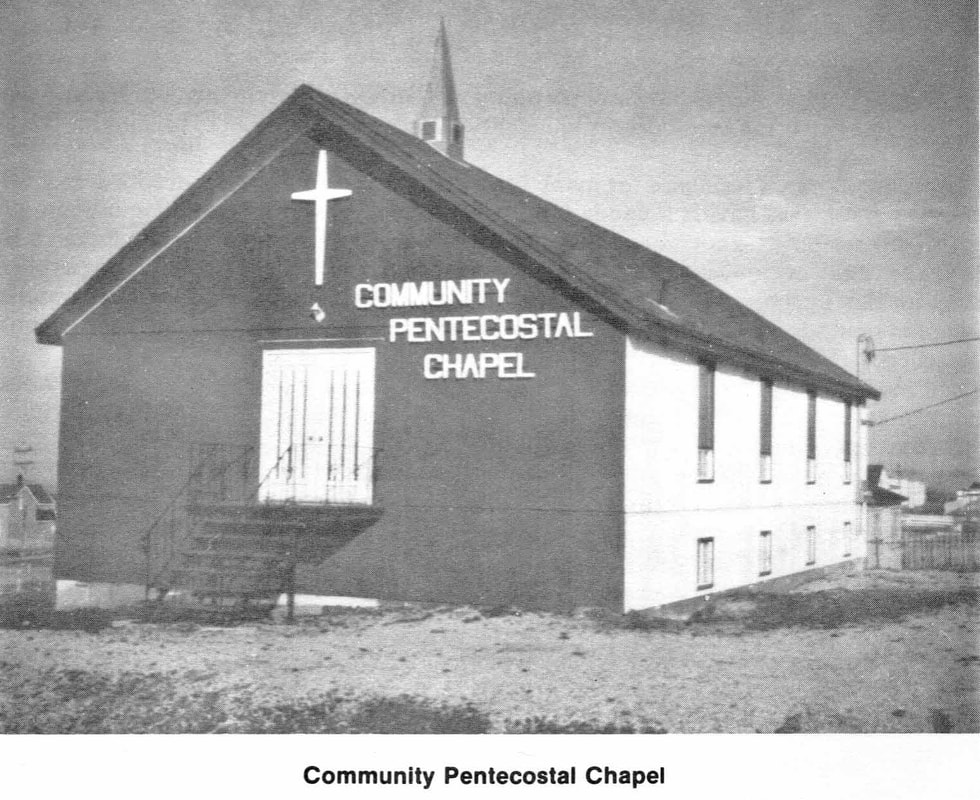 The photo above is from Rev. John W. Hammond's book, The Beautiful Isles, 1979, p. 23. Much of the following information is from the Newfoundland's Grand Banks website in an article prepared by Barbara McGrath entitled "History of the Community Pentecostal Chapel, Bell Island."
John Warwick Hammond (1938-2010) was born Bell Island on July 19, 1938 to Marie (nee Blackmore, c.1918-2008) and Victor Hammond (1912-1988), a Walking Boss (supervisor) with Dominion Wabana Ore Limited. His schooling on Bell Island was at the Immaculate Conception Academy and the Church of England Academy, from which he graduated in 1955. He was called to the ministry at a young age, as seen in the Academician Yearbook for 1955 where his ambition was listed as "Minister." He earned a diploma in Theology from Eastern Pentecostal Bible College in Peterborough, Ontario in 1963. He was ordained to the Christian Ministry in Niagara Falls, ON in 1966. As Pastor Hammond, he completed courses towards a Bachelor of Arts in Biblical Studies from Baptist Christian College in Bethany, Oklahoma, and subsequently a Bachelor of Theology from International Theological Seminary in 1985. He earned his Masters of Divinity degree in 1989 from Trinity Theological Seminary, and his Doctorate from the same institution in 1992. John married Joan McCrory (1938-2017) of Hamilton, ON, c.1960 and together they served first the Pentecostal, then the Baptist Church for 50 years, pastoring in Ontario, Newfoundland, New Brunswick and Nova Scotia.

About 1974, John returned to Bell Island with his young family to live, first in Parsonsville, then The Front of the Island. There he worked to establish Bell Island's first Pentecostal congregation. The "Community Pentecostal Chapel" was erected on Davidson Avenue at the corner of 3rd Street, and was opened for its first service on September 12, 1976. By 1979, the congregation had grown to 100 members. It was "initiated as the missionary vision of the Sunday School of Bethesda Pentecostal Church in St. John's." The building itself "was built with the large offerings given by Elim and Bethesda Pentecostal assemblies." The Hammonds served the Bell Island congregation until 1979. Some of the pastors who subsequently served Bell Island were Pastor Randy Caines, 1979-80; Pastor Peter Brown, 1980-81; Pastor Donald S. Young, 1981-84; Pastor Glen B. Gordon, 1984-86; Pastor B. Milton Jenkins, 1986-87; Pastor Arthur C. Wheeler, 1987-89; Pastor Leonard Mackey, 1989-90. After 1985, membership dwindled until 1989, after which the chapel "was used as a preaching outpost by the four Pentecostal assemblies of St. John's." By 1994, it was under the lay leadership of Keith King, who revived the Kid's Club. Services were being held on Friday evenings with up to about 60 young people in attendance.

After being sold, the chapel was converted to a private residence.
Pentecostal Burials
Prior to 1976, the old Presbyterian Cemetery on Kavanagh's Lane, Bell Island, came under the purview of Jackson United Church, the United Church having assumed responsibility for it following the joining of the original Methodist and Presbyterian churches on Bell Island in 1925. According to members of the Board of Jackson United Church, the Pentecostal Chapel that opened on Bell Island in 1976 approached Presbyterian Church officials for permission to take over the Presbyterian cemetery and they were given approval to do that, however, as far as is known, they did not actually make use of that cemetery. According to the history of the Bell Island Pentecostal Chapel posted on the Newfoundland's Grand Banks website, some Pentecostal members are buried "at the front of the RC Cemetery at the Front of the Island."