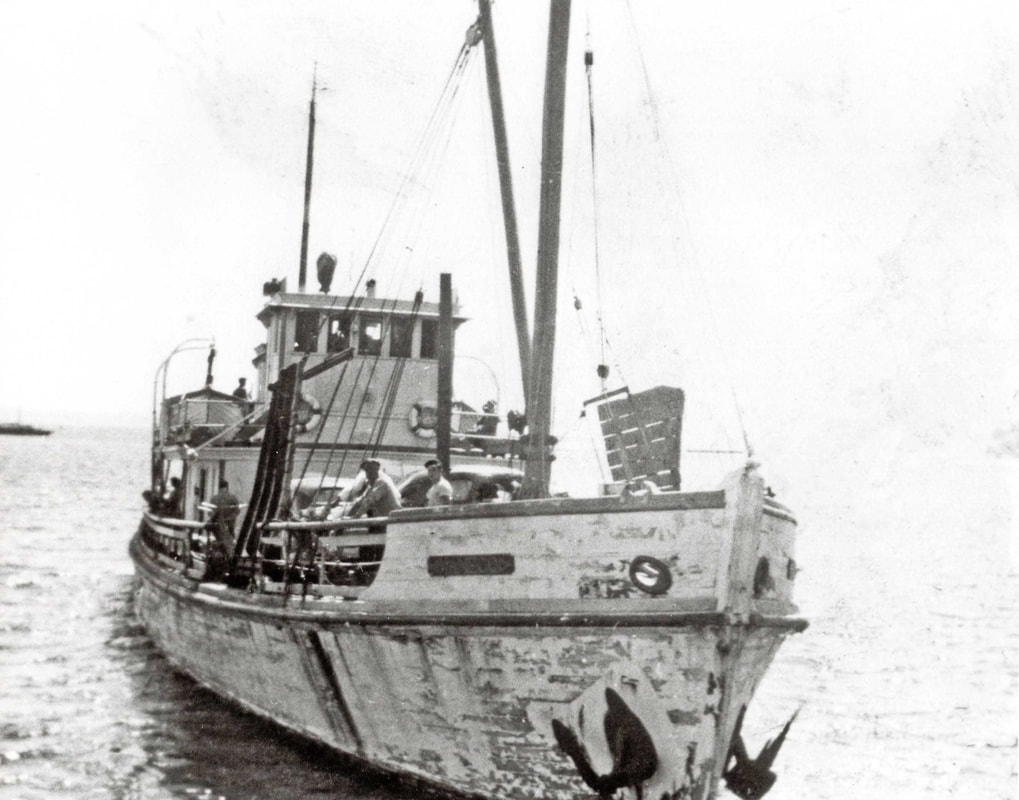 On July 1, 1931, the M.V. Maneco, a diesel-driven car ferry, went into operation. She was the first car-carrying ferry built specifically for the Bell Island service. The contract for her construction had been signed in September 1930 between the Newfoundland government and the Bell Island Steamship Company. She was 120 feet long by 20 feet wide, with deck space for five motor vehicles and cost $50,000. The keel was laid at Mahone Bay, NS, in January 1931. Her name was a construct of the first two letters of the surnames of the three owners: MA for Martin, NE for Neal, and CO for Colbourne. She was first under the command of Captain Colbourne, and later Capt. Saunders. In 1960, Addison Bown wrote of her, "No other ferry before or since was so popular with the Bell Island public as this reliable ship which, in her long career, was signally honoured on two occasions by being chosen to carry royalty from Portugal Cove."

"Hundreds of residents flocked to the Beach to greet her as she steamed up the Tickle after a fast run of three hours from St. John's. A cheering crowd hailed her arrival when she docked at the Tramway wharf, and a rush onboard ensued as women, men and children over-ran the new diesel-driven ferry. A free trip was given across the Tickle that afternoon and the Maneco was crowded with hundreds of passengers on that 'maiden run.' Another large crowd had gathered on the Cove wharf to give her a similar enthusiastic reception as she docked under the guiding hand of Capt. Colbourne. The trip across the Tickle was made in 15 minutes. Joseph M. Greene, MHA, whose efforts were mainly responsible for the fine new ship, accompanied her on her maiden voyage from St. John's. That night he inaugurated the new service with an address over the local radio station, VOGT, in which he traced the history of the local ferry service from the old Progress days down to the coming of the modern car ferry.

"The next day, the Maneco entered upon her regular service to and from Portugal Cove and other points in Conception Bay. The first motor car to be taken from the Island on her was that of Albert Mercer, manager of the Wabana Lumber Company. Three motor cars from St. John's were brought to the Island on that first day. The new ferry brought a Sunday service to Bell Island for the first time on July 5." Source: Addison Bown, "Newspaper History of Bell Island," 1931, p. 40.
Briefly, the beginning, the middle and the end of the ​MANECO (A.K.A. ​Terra Nova)
The beginning:
"At the beginning of 1931, there were in excess of 1,000 miners from the local mainland (around Conception Bay) who were commuting to Bell Island to work. That was the reason why the new ferry, The MANECO, which would carry six cars and service all points around Conception Bay, was being built in Nova Scotia." Source: Addison Bown, "Newspaper History of Bell Island," 1931, p. 37.

The middle:
​The motor vessel MANECO caught fire at the Earle Freighting Company wharf in Carbonear about 4:30 a.m. on the morning of April 8, 1957 and was sunk near the head of the wharf. The fire was caused by the automatic oil furnace. The MANECO had been taken off the Portugal Cove-Bell Island ferry service in 1955 when the Public Utilities Commission granted the Newfoundland Transportation Company the exclusive franchise to operate the ferry service. She was then tied up in St. John's for about a year before being sold at auction to Earle Freighting Company, who took her to Carbonear and renovated her to serve as a freighter. She was just about ready to begin that new life when the fire occurred. Source: Evening Telegram, April 8, 1957.

The end:
Incredibly, the fire of 1957 did not end the life of the MANECO. Apparently she was refloated and refitted because in 1961 she was renamed the Terra Nova. In 1963, she made her maiden voyage to the seal fishery and was reported to have done "quite well" that year. The following year, she returned to the seal fishery under Captain Steve Dowden. "About 25 miles northeast of Cape St. John, she was crushed in the ice and slipped beneath the Arctic ice floe on March 21, 1964. The crew of 24 all got off safely and were picked up by a Norwegian sealer." Sources: "This Month: Portugal Cove-St. Philip's Magazine," Sept. 1999, No. 41, pp. 14-15; Maritime History Archive, "Maneco" in Captain Harry Stone Collection, Part 1.
MANECO's Royal Service
The Maneco was the only ship of Newfoundland Registry to fly the Royal Standard, which she did on two occasions:

On June 17 1939, when King George VI and Queen Elizabeth ended their North American tour, the Maneco took the Royal Visitors from Portugal Cove to a waiting battleship, ​The Empress of Britain, in Conception Bay for their return trip to England.

On November 12, 1951, the Maneco was called upon again to carry royalty. Queen Elizabeth II (then Princess Elizabeth) and the Duke of Edinburgh were taken from Portugal Cove to the S.S. ​Empress of Scotland in Conception Bay after their tour of Canada and the United States.

In the photo below, published in the Daily News, Dec. 31, 1955, after her retirement from the Bell Island-Portugal Cove service in 1955, the Maneco was decked out for the 1939 Royal Visit. 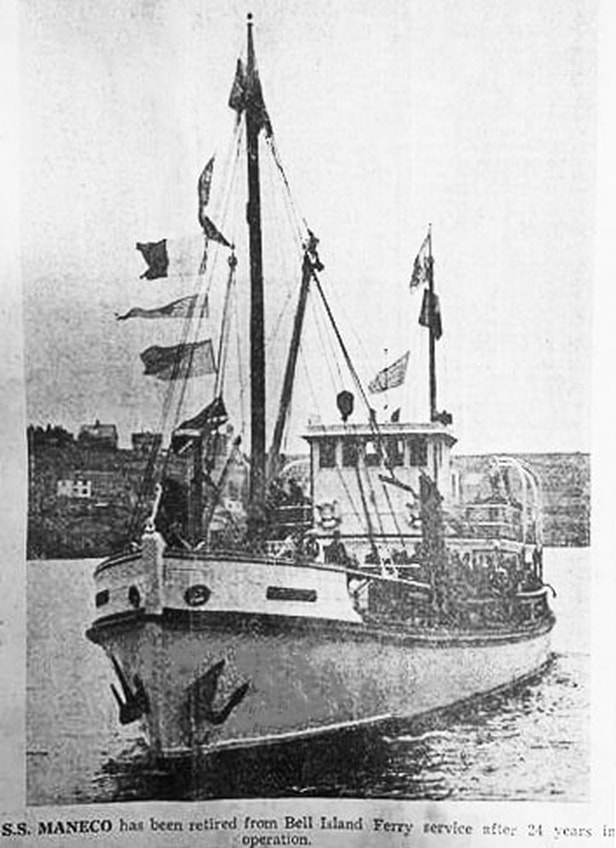