HISTORY
EDUCATION
METHODIST / UNITED CHURCH
The First Methodist/United Church Schools
​1906-1943
It was reported in the Daily News in 1906 that on September 20, 1906, "the ladies of the Methodist Church held a sale of work in their newly-erected school room, the first Methodist school on Bell Island." There was no indication as to exactly where this school was located, or any other details about it, but it was probably at The Front not far from the Methodist Church, which was in what is now the United Church Cemetery. (Source: Bown, 1906, p. 21.) (No image has been found of this first school.)

​When Addison Bown was compiling his "Newspaper History of Bell Island," he noted that "in later years the building (i.e. Bamford Hall) was acquired by the Steel Corporation and was known as Caribou Hall," although some people were still referring to it as Bamford Hall as late as the 1990s.] (Source: Bown, 1911, p. 36.) In the July 1991 photo below, taken from 3rd Street by Gail Hussey-Weir, Bamford Hall is in the middle of the picture. The former No. 3 Mine Yard is on the left. Houses on West Mines Road are in the left background, with the former No. 6 Mine Yard behind them. Houses on the east side of 10 Commandments Range are on the right, with the Green in the background. Bennett Street is in the foreground. The building was taken down in 2001. [Read more about Bamford Hall on this website at ​https://www.historic-wabana.com/built-heritage.html.]

In the middle far left of the photo of No. 3 Mine Yard below, the green-roofed building next to the parked cars is Caribou Hall, formerly Bamford Hall. Photo courtesy of A&SC MUN Library, Southey Collection.

The mining company was using Bamford (aka Caribou) Hall as a Dry House in 1954, as can be seen on the right-hand side of the 1954 Insurance Plan of Bell Island below. [You can read more about Bamford Hall/Caribou Hall on this website at https://www.historic-wabana.com/built-heritage.html​.] 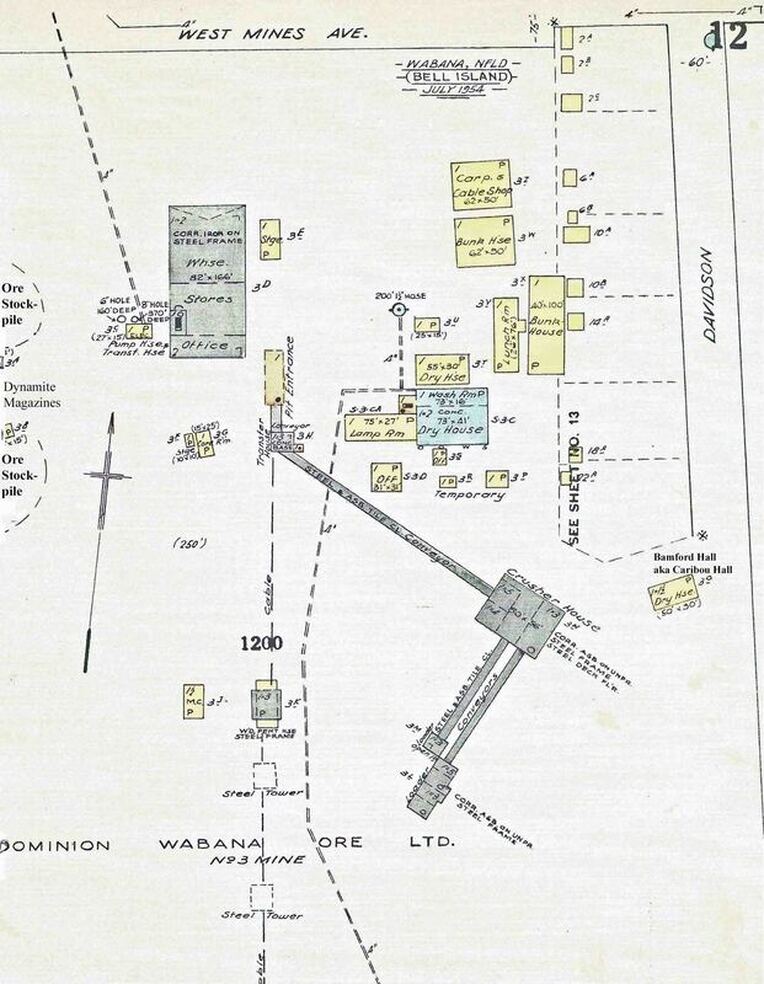 ​So it seems that in the early years of the 20th Century, there were two Methodist schools on Bell Island, one at The Front and one at The Mines.

About 1921, when Rev. Ira Curtis was the Methodist Minister, a new Methodist School was built at a cost of about $10,000 on the west side of Davidson Avenue just south of the marshy area and about 400 yards from where Jackson United Church would be built in 1951. (Today, there is a small apartment building on the site.) The Wabana Mine Workers Union had their hall immediately south of the school.

The school building was 2-stories. It originally had two classrooms on the main floor, with a second floor that served as the church hall, where concerts, church suppers, literary debates and talks were held. The front of the building facing Davidson Avenue had a central doorway which led onto the stairs to the hall on the upper floor. The hall was quite spacious and had gymnastic rings suspended from the ceiling. When you entered the hall, the stage was to the left (south) side. The entrance to the west side of the stage was from the kitchen area where the women cooked the church suppers.

A single storey was added at some point to serve as the Grades 1-3 classroom. The classroom on the south side of the building was for Grades 4-6. The other original classroom was for Grades 7-11, which were taught by the Principal. Each classroom was entered from the outside, with a cloakroom at each entrance. There were connecting doors between the rooms, but no corridor. The senior classroom was entered from the vestibule, where the stairs went up to the hall above. There was no furnace in the building. Each classroom had a stove. There was no indoor washroom; privies were located outside. Presumably, when this school opened, the earlier two schools were no longer operating as day schools. When the Methodist Church congregation became United Church in 1925, the school became a United Church school as well. On March 5, 1943, a fire originating from an over-heated stove destroyed the school between five and six o'clock in the evening. At the time, there were 100 pupils and three teachers: Madge Mews, Marion Woolfrey and Principal Robert Jenkins.

The photo below, taken about 1926, and courtesy of Heather Lindsay, is the only one presently available of the school that burned down in 1943. William Lindsay, Jr. is the third boy from the left sitting in the front row. Information above about the layout of the school is courtesy of Lester Taylor, who attended the school. Other information from the Daily News, Jan. 19, 1945, and the Evening Telegram​, Mar. 6, 1993, p. 57. 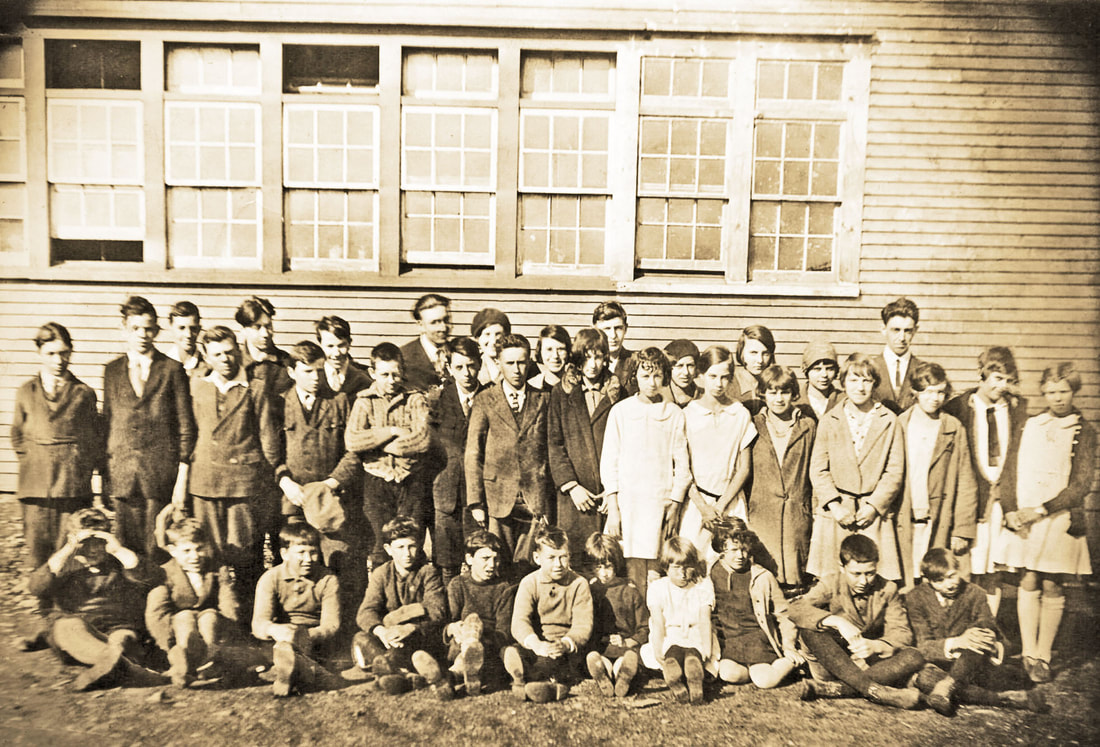 Below: In this image from the 1954 Insurance Plan of Bell Island, I have marked the approximate location in the bottom left corner of the pre-1943 United Church School on the west side of Davidson Avenue. It was actually a few hundred feet or so south of this map. Jackson Memorial School is shown on the east side of the street. 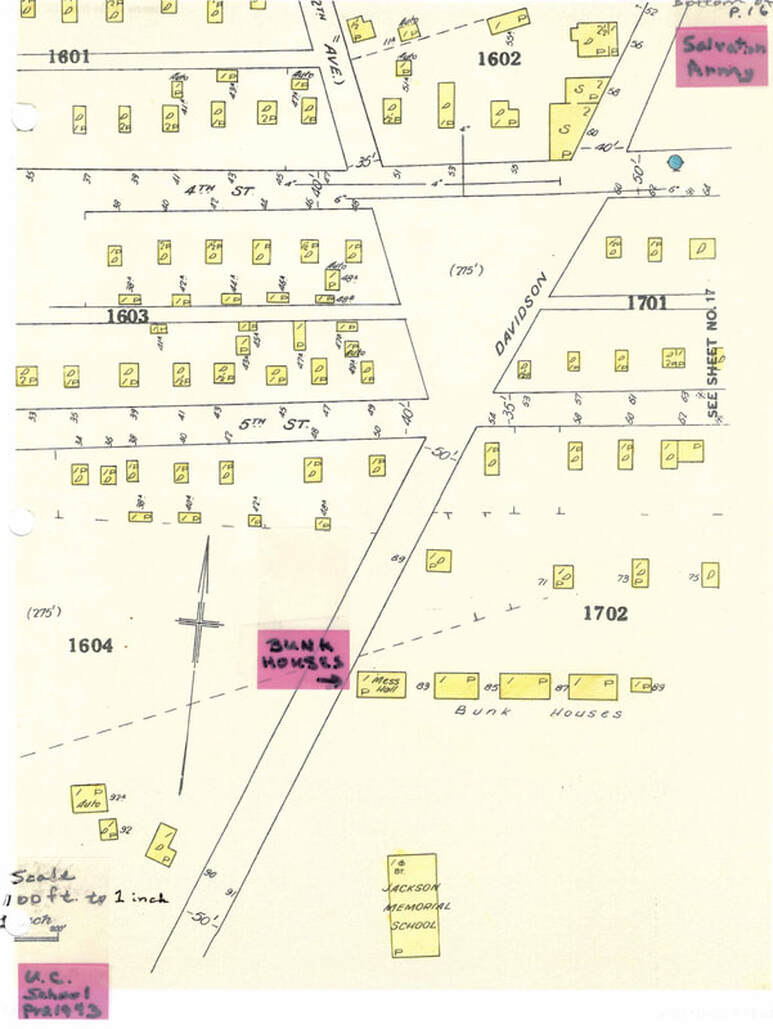 ​JACKSON MEMORIAL SCHOOL
1945 - 1983
Built in 1944, Jackson Memorial School, on the east side of Davidson Avenue opposite Jackson United Church, was officially opened on January 16, 1945. It was a 4-room, one-storey building designed by DOSCO Engineer, Reginald Taylor, who had also designed the Prince's Theatre in 1940. The school's dimensions were 45' x 67' with a full basement. ​Sometime in the 1950s, two more classrooms were added to its north side. The school was named in honour of Reverend Oliver Jackson, who had served the Bell Island-Portugal Cove charge from 1928-1931, and who drowned while on church business in 1937.

The photo below is of the 4-room Jackson Memorial School. Photo by William Lindsay, probably taken shortly after it was opened in January 1945. 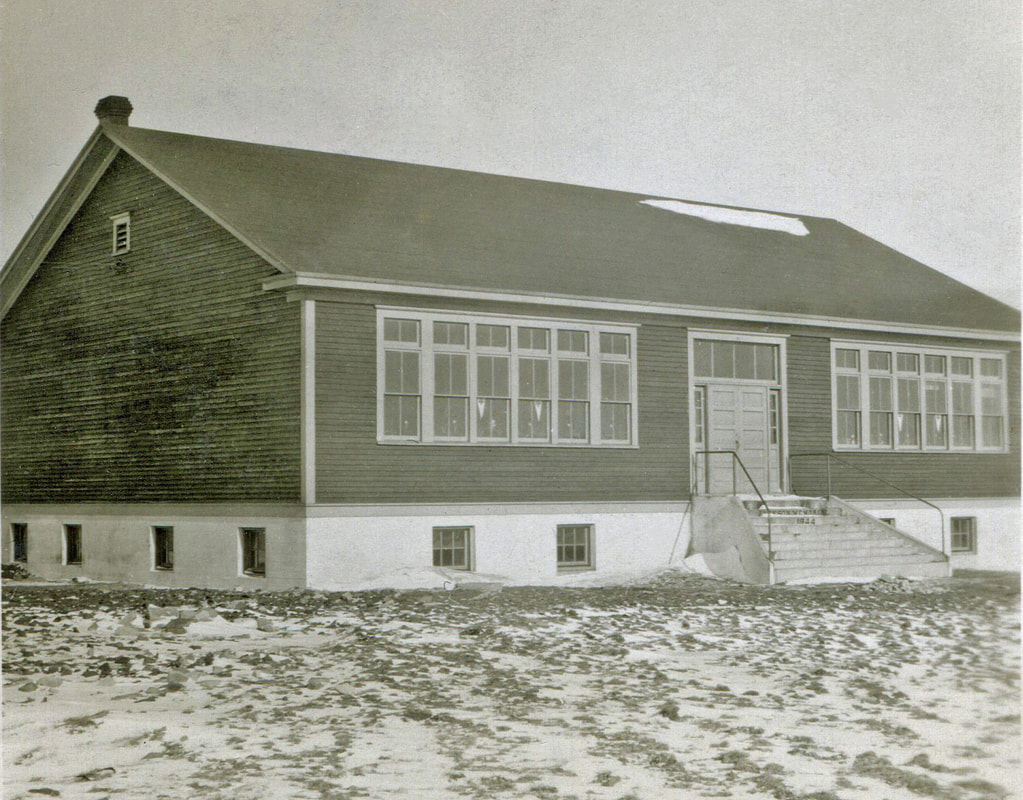 The 2020 photo below of the original steps with the date of construction, 1944, is courtesy of Glenda O'Brien. 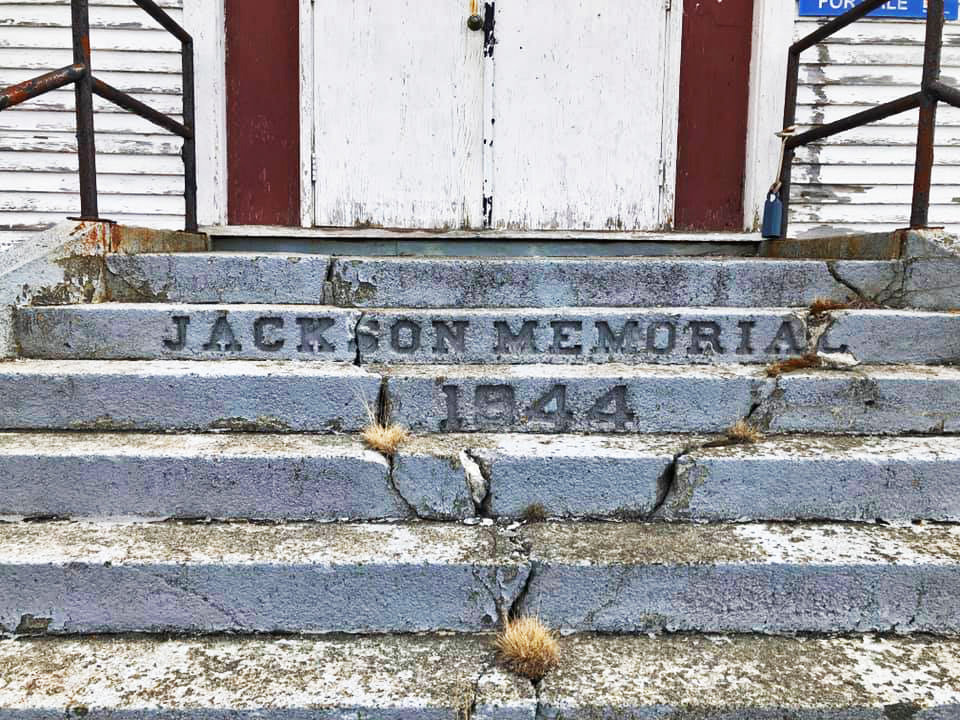 ​Below: Students in front of Jackson Memorial School, c.1947-48 (.060). Some of the boys at the back include: Roy Andrews, Norman Normore?, Edgar Case, Joe Luffman and ? Normore. Others in the photo include: Principal Jenkins; teacher Madge Mews; Phyllis Bugden (whose father drowned when the ferries collided in The Tickle in 1940); Minnie Kelloway; Shirley Cantwell; Gertrude Saunders (daughter of Captain Saunders of the Maneco; Nancy King; Elizabeth Lindsay; teacher(?) Sadie Clarke; Rev. Rowsell. [If you can provide any names or the year, please get in touch at "historic.wabana@gmail.com".] 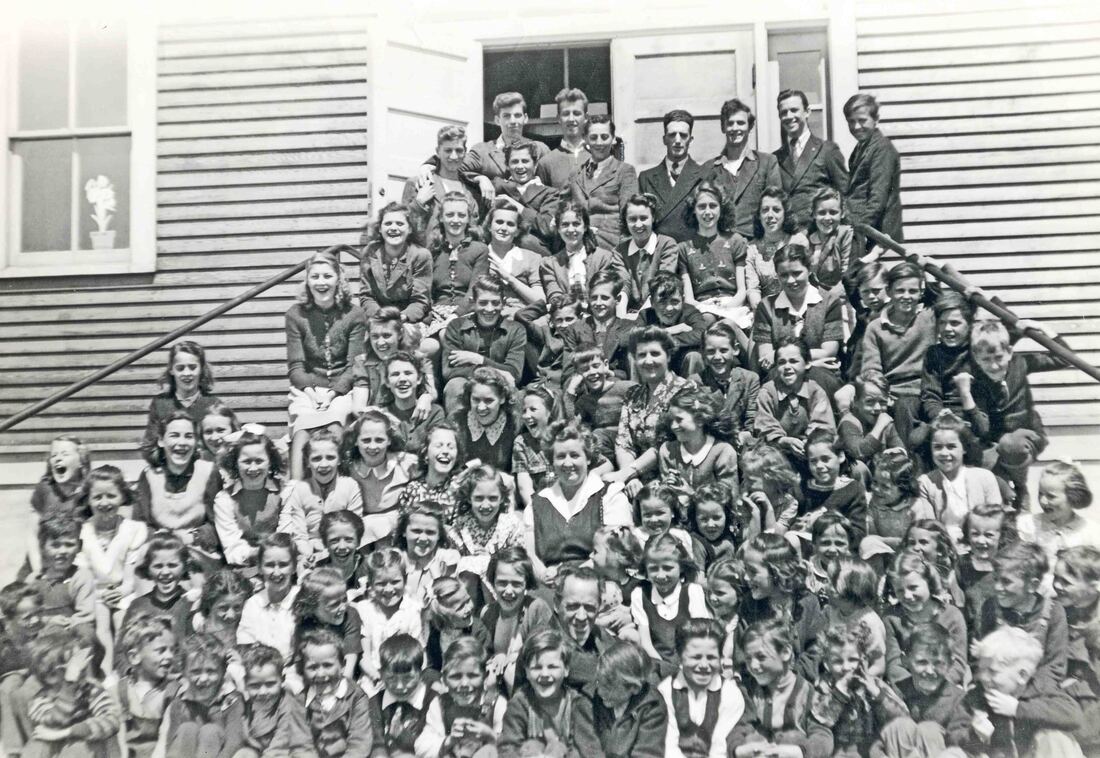 Below: A class of Jackson Memorial students in the mid-1950s. Photo courtesy of Blaine Hatch. 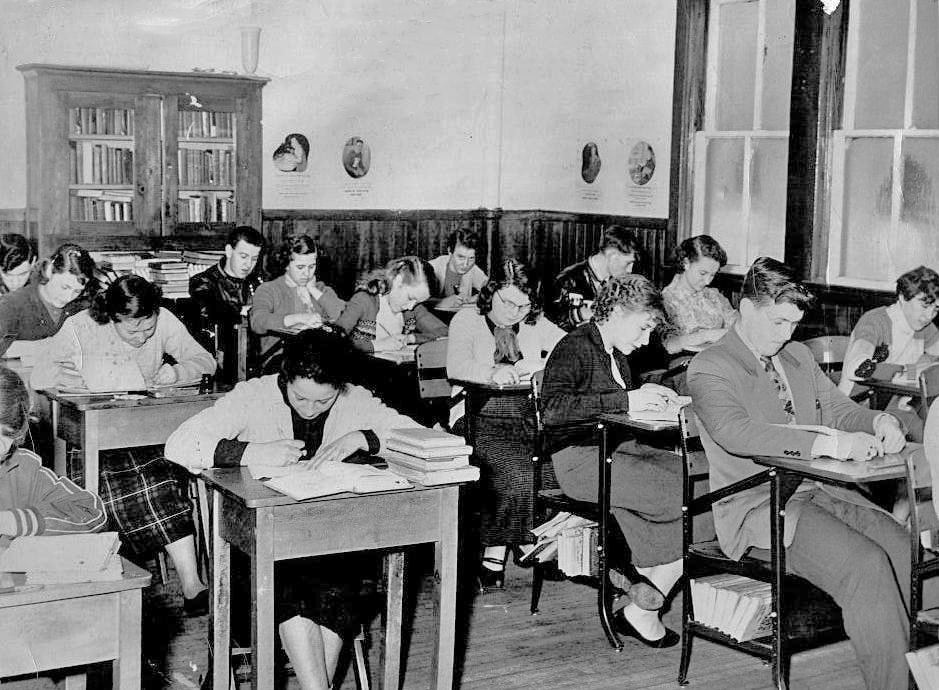 The photo below shows Jackson Memorial School sometime in the 1970s (judging by the cars). The original 4-room school is on the right, with the added entrance and extra two classrooms on the left. Photo courtesy of Sharon Bedard. 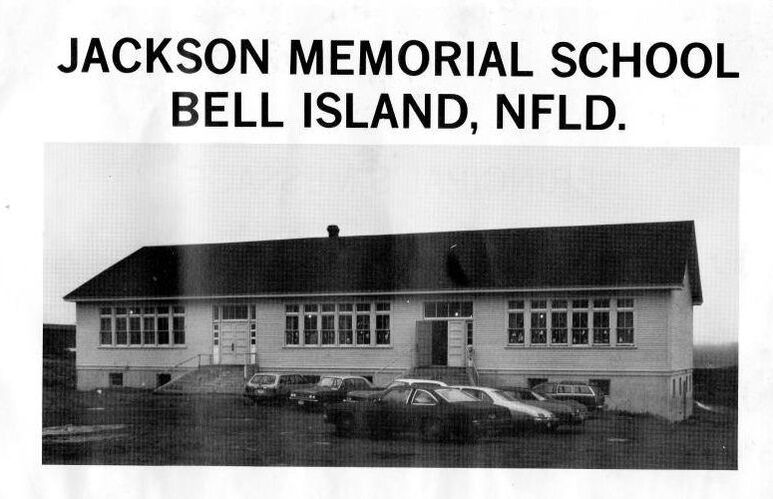 The photo below was taken by Gail Hussey-Weir in 2013.

The iron ore mines on Bell Island closed down at the end of the school year on June 30, 1966. The school population declined sharply in the late 60s as families moved off Bell Island to seek work elsewhere. In 1969, Protestant school boards were integrated under the name Avalon Consolidated School Board, that took in Bell Island's United, Salvation Army and Anglican schools. Jackson Memorial ceased to be an all-grade school at that time. For a number of years in the 1970s, Protestant children attended St. Augustine's for Kindergarten to Grade 3, then Jackson Memorial School for Grades 4-6, then returned to St. Augustine's for Grade 7 before moving on to St. Boniface Regional High School for Grades 8-11.

Meanwhile, the population continued its downward trend.  By the end of the 1970s, Jackson Memorial had closed as all Protestant students were then accommodated at the relatively newer St. Augustine's, which had been built in 1965 after fire had destroyed the original building in 1963. On July 2, 1981, fire destroyed the 1965 St. Augustine's School. While waiting for that building to be replaced, Jackson Memorial reopened and operated from September 1981 to June 1983. The present St. Augustine's opened across the street from it in September 1983.

Over the ensuing years, Jackson Memorial has been utilized sporadically by various groups for different purposes as the need arose and is still standing in 2021.

Sources (along with others mentioned throughout the text):  "Jackson Memorial School Opened on Bell Island," by Addison Bown, editor of The Bell Islander newspaper, in the Daily News​, Jan. 19, 1945. Thank you to Ron Moores for information about Jackson Memorial under the Avalon Consolidated School Board.