HISTORY
HEALTH
HOSPITAL
by Gail Hussey-Weir
created March 2022
NOTE: To see a timeline of efforts to procure a hospital for Bell Island, scroll to the bottom of the page.
​
The following images are from a full-page spread in the Evening Telegram, Feb. 16, 1965, p. 9 of the official opening of the Dr. Walter Templeman Hospital. Thank you to Wally Byrne for supplying the newspaper clippings.

The banner headline across the top of the page reads, "40-Bed Bell Island Hospital Officially Opened."

The first image is the right-hand top side of the page. 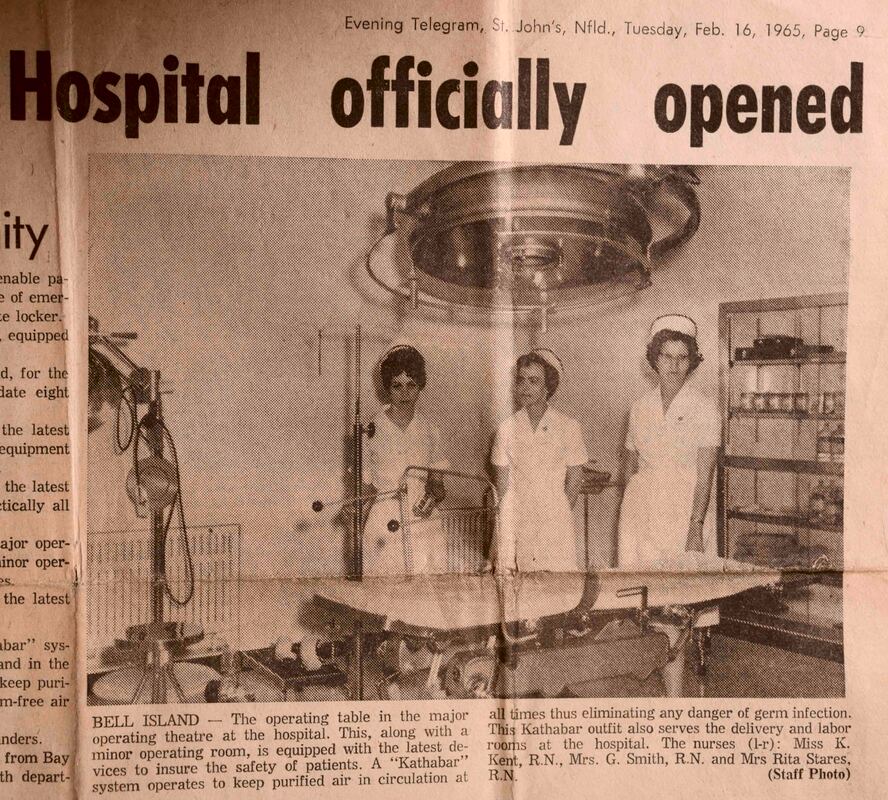 The next two images comprise the article in the top left-hand side of the page describing the new Bell Island Hospital and its administrators. The hospital was officially opened on Monday, February 15, 1965. The sod had been turned for construction of the hospital on October 7, 1963 by Premier Joseph R. Smallwood. The total cost of construction and equipment was approximately $1.25 million. $100,000 of that was raised on Bell Island by a committee of the Miners' Union headed by Gideon Robbins, with DOSCO Industries Ltd. giving $30,000. 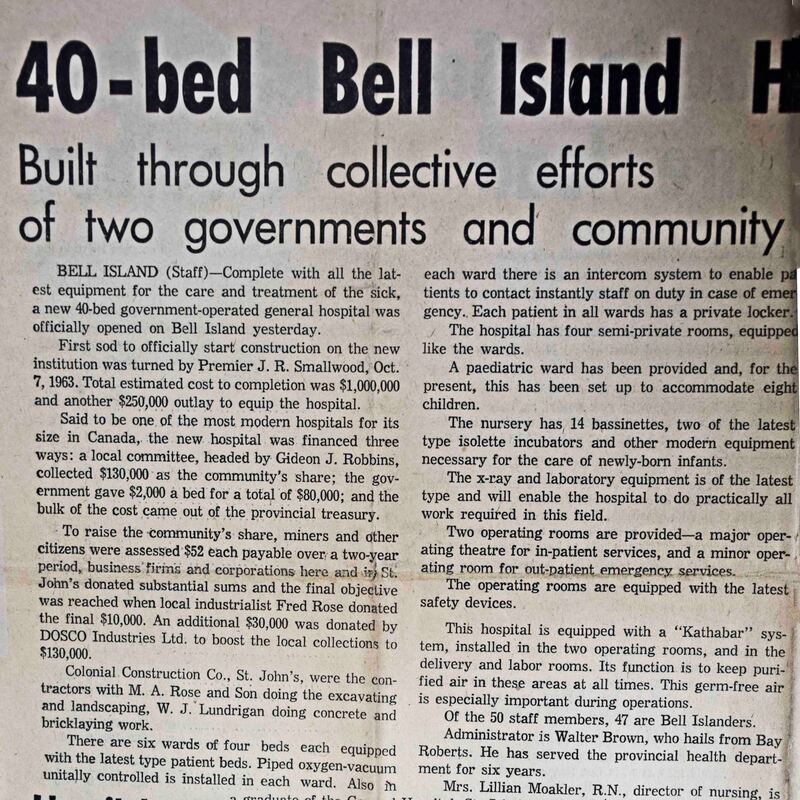 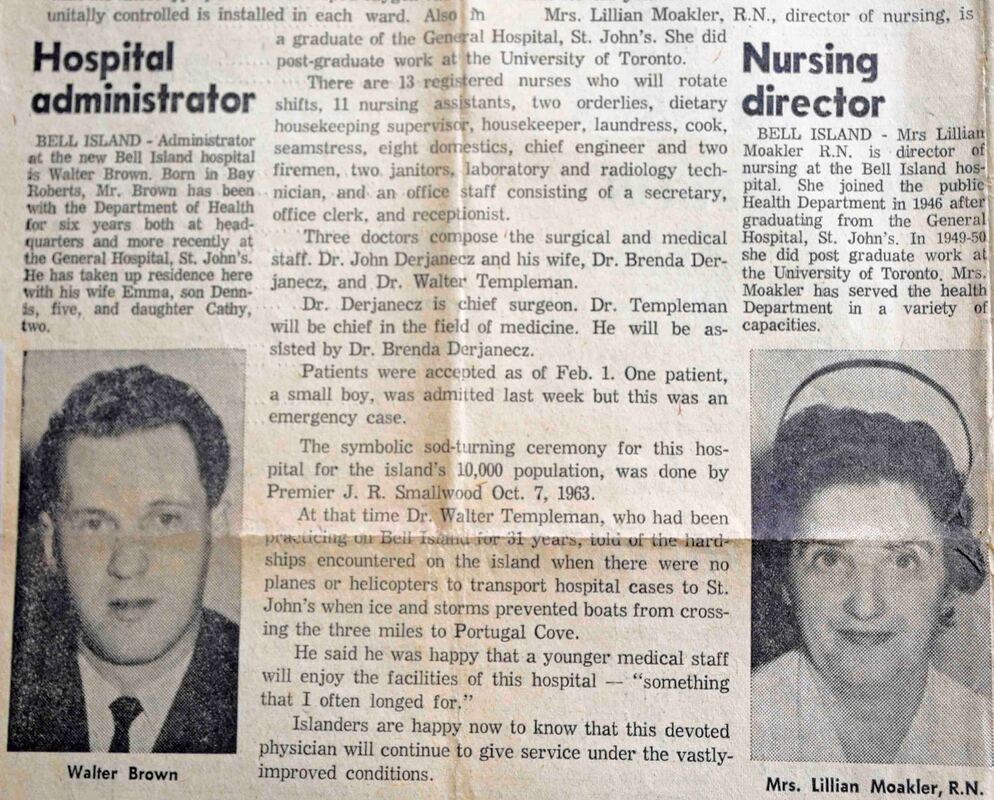 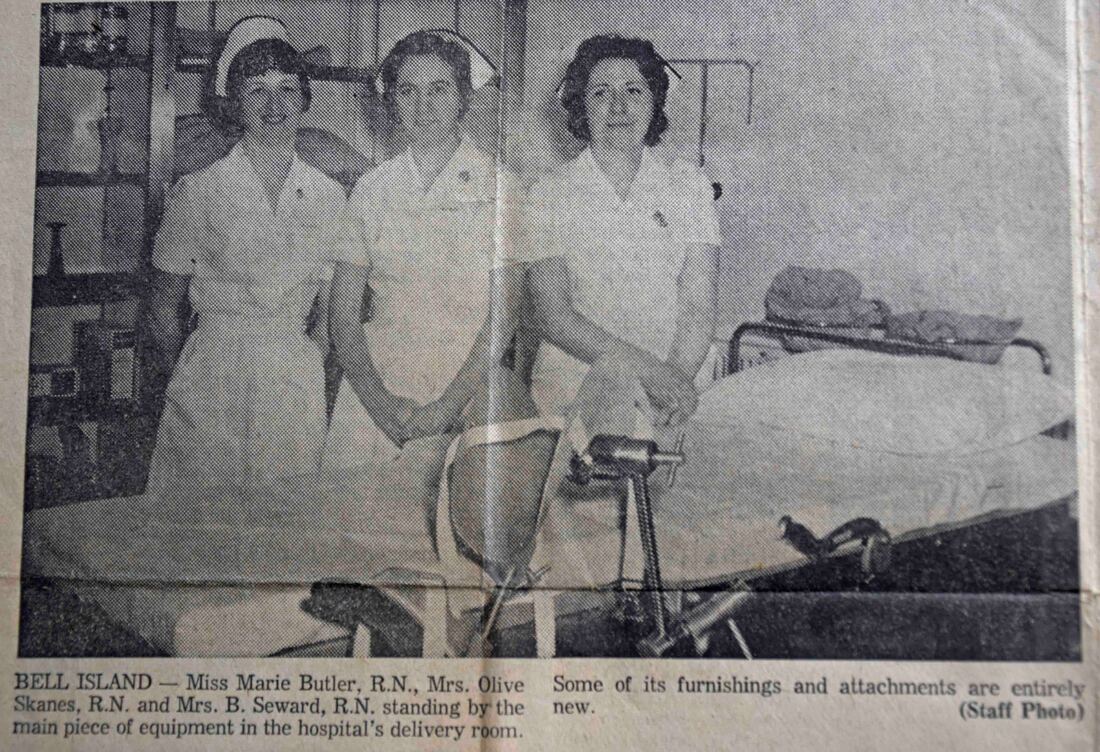 The building contractor for the hospital was Colonial Construction Co. of St. John's. M.A. Rose & Son of Bell Island did the excavation and landscaping work. W.J. Lundrigan Co. did the concrete and brick work. 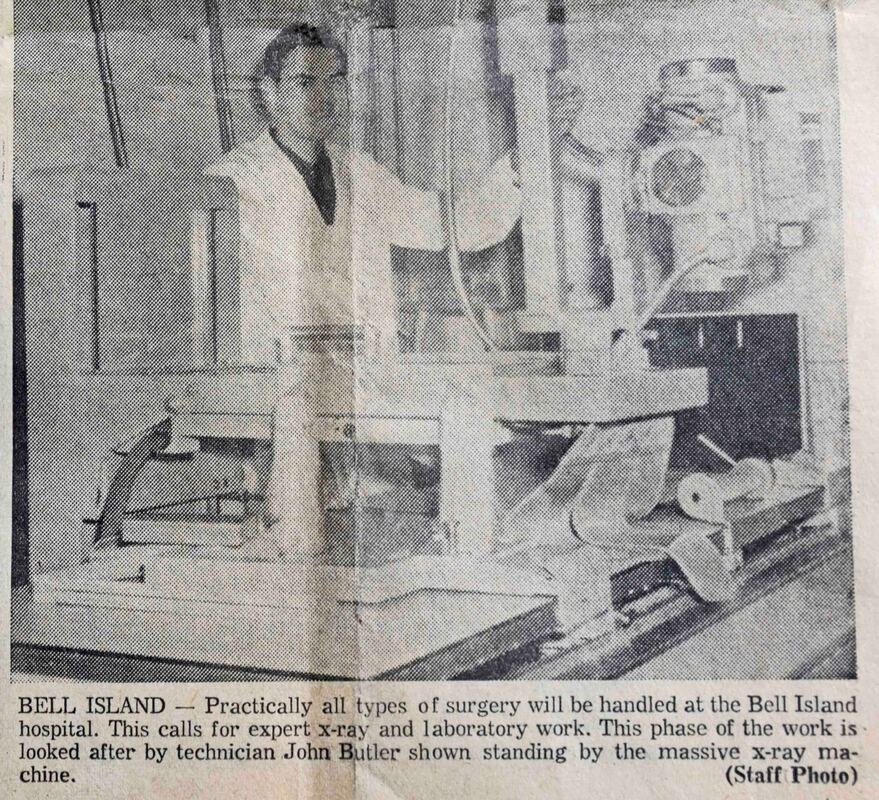 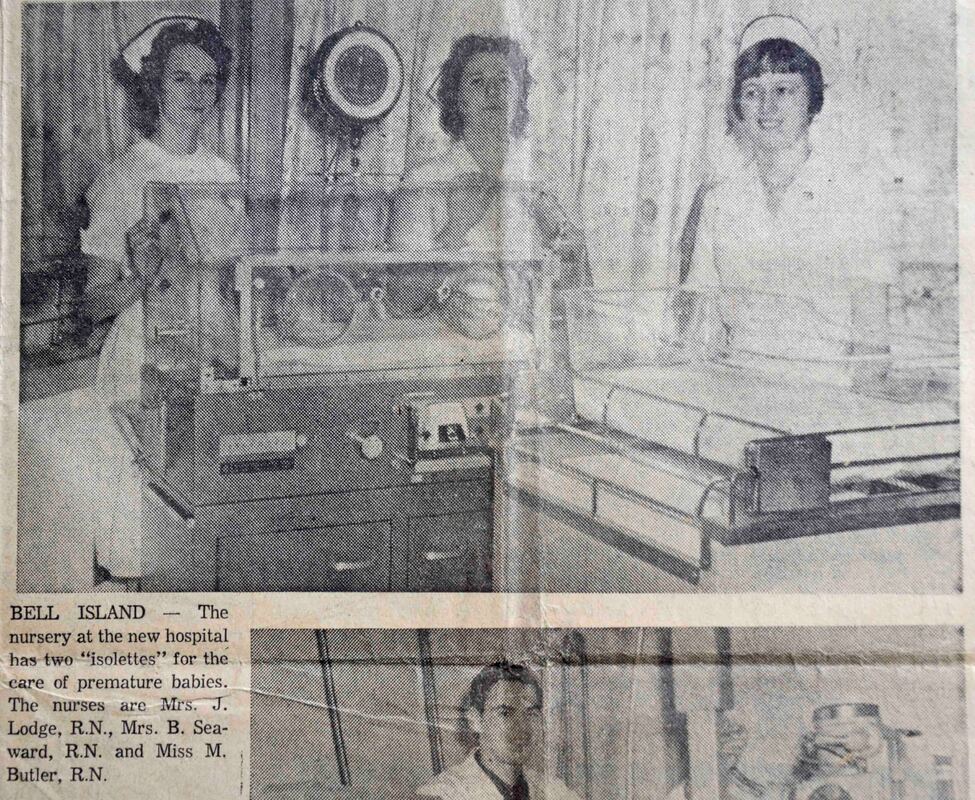 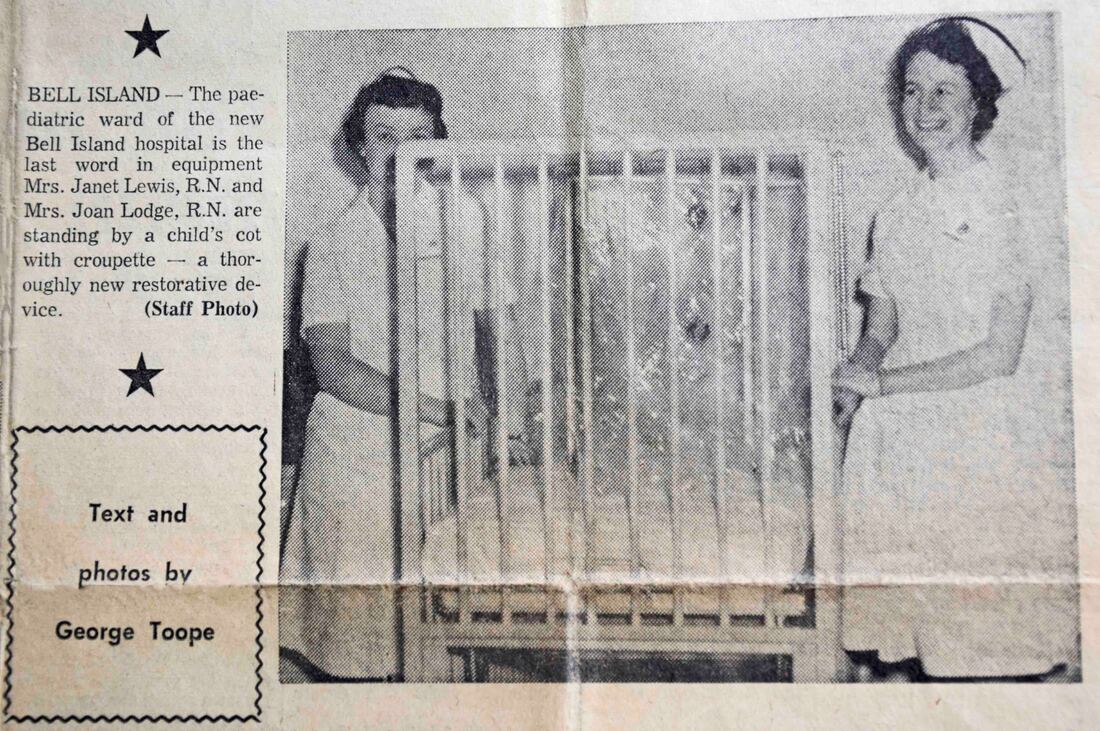 FUNCTIONAL CHANGES TO THE OPERATION OF THE HOSPITAL
​At the time of the opening of the hospital in 1965, the mines were still operating and the permanent population was 9,090 plus several hundred or more commuting miners. After the mines closed in June 1966, just a year and a half later, the population decreased sharply as families left to find work elsewhere. It has been decreasing steadily ever since and, by the 2021 Census taking, the population had shrunk to 2,224. Bell Island shares the problem many rural communities face: an aging demographic and decreasing birth rate. Accordingly, the hospital's function has changed over the years. It is not clear exactly when the "hospital" became a "health care centre." It is listed in telephone directories as "Hospital" into the 1990s. In a 2009 locally published directory for Bell Island, it is listed in the "Emergency Numbers" as "Hospital," but also under "Templeman, Dr. Walter Health Care Centre."

A December 2011 site profile for the Dr. Walter Templeman Health Centre lists the services provided as: long term, acute, palliative and respite care for inpatients, outpatients, 24-hour emergency service, community health nursing, mental health, social work and addictions counseling. A private dental clinic was also located within the centre. A  physician or nurse practitioner was also on call for after hour emergencies. There were out-patient clinics Monday to Friday. At that time, the centre had 3 acute care and 15 long-term care beds, and one respite care bed, Lab and X-Ray, stores, medical records, facilities/housekeeping, mini pharmacy and volunteer services.

How the hospital's function changed over time was revealed in "Eastern Health's StoryLine, Our Voices, Our Story: Tea With Mrs. Moakler: Dr. Walter Templeman Health Care Centre's First Administrator," September 14, 2020 on the website storyline.easternhealth.ca. Some of the changes mentioned in the interview with Lillian Moakler, R.N. were:
​
TIMELINE OF EFFORTS TO PROCURE A HOSPITAL FOR BELL ISLAND
​"The first mention of the need for a hospital on the Island" occurred after an accident that happened in the Fall of 1900. Eli Brown, 65, was a mason at the construction of the Court House. While walking along the ore track, he was struck from behind by a loaded ore car and his right leg was broken in two places. He was conveyed to Portugal Cove and thence by wagon to the General Hospital in St. John's. The incident caused much unfavourable comment as the patient did not reach the hospital until 12 hours after the accident. The newspaper account of the incident spoke of the "urgent necessity of a hospital on the Island, where accidents of a severe nature could be attended to without having patients sent all the distance to St. John's over a long stretch of land and water."

A September 8, 1919 letter to the editor of the Daily News​ advocated for a hospital for Bell Island.

In February 1920, the Great War Veterans' Association of Bell Island met at the Star Hall to discuss a suitable memorial to their boys who had died in what was called "The Great War," which had ended just over a year earlier. A fundraising campaign was started to raise money for club rooms for veterans. $3000 was raised by mid-April. In late April, the Daily News published a letter from someone who signed himself "A Miner." He suggested the Island already had enough club rooms and that, instead, a hospital should be erected as a War Memorial. Lady Constance Harris, wife of Governor Sir Charles Harris, wrote the paper supporting this idea and offered financial support. Nothing more was heard of the matter during 1920, but the idea of building club rooms was dropped, along with the idea of a hospital, and the decision was taken to erect a monument to the Island's dead. Addison Bown, in his "Newspaper History of Bell Island," surmised that the proposal for a hospital failed at this time because the post-war recession was setting in. On top of that, the 2 mining companies, Scotia and Dominion, were negotiating a merger, which brought with it shut-downs and lay-offs. Wages were low, with the highest pay in the mines being 25 cents an hour for drillers and blasters and 1 and 1/2 cents less for other workmen. By January 1921, Bell Island was in a depression, with no employment to be had. When work resumed, it was for 4 days a week only and talk of building a hospital faded.

When he was writing about the 1932 Newfoundland elections in 1957, Addison Bown commented: "As usual, a hospital for Bell Island 'in the next four years' was one of the campaign promises at that time. O thou hardy annual, how many times and in how many elections hast thou been promised to the people of Bell Island, who are still waiting for their hospital!"

From the Daily News, Fall 1937: "Rumours were again prevalent that a hospital would be built on the Island but it would take the form of a cottage hospital."

​In 1957, a promise was made by the Provincial Government to build, not one but, two hospitals on Bell Island, one for children.

On Nov. 22, 1961, it was reported in the Wabana Star that a special meeting of Local 4121 was held to discuss the building of a hospital on Bell Island. All those present gave their approval to a 50-cent a week check off, so that the Hospital Committee, chaired by Gideon J. Robbins, could now commence distributing check off forms for individual signatures. The Union also gave the committee $50.00 to take care of incidental expenses for meetings, etc.

On Sept. 29, 1962, an item in the Daily News stated that "the first payroll deduction for the hourly paid miners took place Thursday. The cheque was deposited in the bank toward the fund for the new hospital. Yesterday, salaried employees of DOSCO who have signed the pledge, had their first payroll deductions. The fund is for a 40-bed hospital planned for Bell Island." (Daily News, Sept. 29, 1962, p. 5.)

From the Dec. 31, 1963 Daily News, p. 15, Department of Municipal Affairs Review of Activities for 1963: "Bell Island: At present, an engineering design is being carried out for a proposed trunk sewer to service the new hospital and the community as a whole." On page 64 of the same issue, under "New Hospitals: The Bell Island hospital is a 40-bed hospital similar in design to the Baie Verte hospital. Belanger & Roy are the architects and engineers. The contract was let in September 1963 to Colonial Construction Company."