PEOPLE OF BELL ISLAND
J
​The People of Bell Island pages feature mini-biographies (in alphabetical order by last name) of some of the people who have lived and worked on Bell Island, or have had an impact on its history in some way. Much of the information comes from historical records and newspaper or magazine articles. Some will be from Census records and some from anecdotal accounts by people I have interviewed. It will always be a "work in progress," with information being added as it comes available. If you would like to add information for yourself or your family, or simply to have your parents or grandparents names added as a memorial to their life and work on Bell Island, get in touch by emailing:

To view the other biographies, hover your cursor over the People of Bell Island button in the menu at the top of this page, then choose from the drop-down menu of alphabetical listings.

Matthew Jackman (1814-1907): Mailman/ferryman/farmer. He was the son of Mary Greene of County Wexford, Ireland, and Peter Jackman (d. 1868), and the grandson of John Jackman (c.1750-1810), fisherman, of County Kilkenny, Ireland (see his bio above). Matthew married Mary Power (1830-1891). He is listed in Lovell's Gazette of 1871 as a farmer. His death on March 22, 1907 was recorded in The Daily News: "For over 60 years, Matthew Jackman operated the ferry and mail service between Bell Island Beach and Portugal Cove, a route he served in his sailboat in all kinds of weather. He had many narrow escapes and some hard encounters with the sea, wind and ice in that period, but gave satisfaction to the travelling public and died esteemed by the whole community. His son, William, carried on as mail courier but the old black punt was now replaced by a steamer."

Sources: Royal Gazette, 1811; Newfoundland Will Books, Vol. 3, pp. 83-84, probate year 1868; Rev. John W. Hammond, The Beautiful Isles, 1979; Addison Bown, "Newspaper History of Bell Island," Vol. 1, p. 22.
Rev. Oliver Jackson (1887-1937): Methodist and United Church Clergyman,  Educator, Editor, Author and Social Reformer. He was born July 18, 1887 in Abergavenny, Wales, to Melinda Lythe and George Jackson. He served as a Methodist Lay Preacher in Wales before volunteering in 1911 for service in Newfoundland, where he became a probationer of the Newfoundland Conference of the Methodist Church of Canada. He served in Campbellton, NL, from 1911-13 and Clarke's Beach from 1913-15. From 1915-18, he studied at Wesleyan Theological College in Montreal, from which he received his Bachelor of Divinity degree. His ordination was at Gower Street Methodist Church in St. John's on July 3, 1918. On July 24, 1918, he married Rosalie Noseworthy, the daughter of Frank Noseworthy, a general dealer and Methodist Layman, of Clarke's Beach. He was posted to Brigus until 1923, also serving Cupids, then Freshwater, Conception Bay until 1928. He served the Bell Island-Portugal Cove United Church charge from 1928-1931. He became the United Church Conference's superintendent of missions in 1931 and retained that position, along with that of field secretary of Christian education, until his death in 1937. He drowned November 3, 1937 while visiting the Petites and Grand Bruit mission on the Southwest Coast of Newfoundland. He is buried in the General Protestant Cemetery in St. John's. Following his death, he was hailed as the "apostle of the outports." Three buildings were named in his honour: Jackson House at Western Bay, and Jackson United Church and Jackson Memorial School, both on Bell Island and both still standing in 2019. Source: Dictionary of Canadian Biography ​(where you can read the full biography).

The photo below is of Oliver and Rose Jackson and their children, c.1935. L-R: Georgina (known as Georgie), Rupert, Ivor (eldest son) and Francis Lindbergh (known as Lin). Photo courtesy of Andrea Morgan and Valerie Pippy. 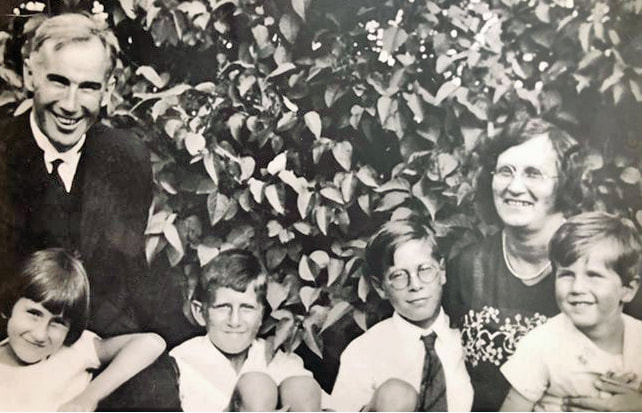 Frederick F. Jardine (1879-1944): Filing Clerk with DOSCO; Writer/Editor; Justice of the Peace. He was born in St. John's in 1879 to Mary (Koorner) and William Jardine. (William was the son of William Jardine, a brewmaster, who came to Newfoundland from Scotland and married ? Carney. Frederick's father, William, is said to have died suddenly while walking to the St. John's waterfront to embark with Captain Bob Bartlett and the explorer, Perry, on their voyage of discovery to the North Pole. In 1943, Frederick Jardine wrote, "I love and am deeply interested in every scrap and shred of this Colony's history. And I have a right to be. Though of immediate Scots descent on the paternal side, on the distaff side, I can trace back to Kirke's colony at Ferryland. John Kearney, my forebear, was one of the brave colonists who came out with Sir David Kirke in 1658 or 1659 from Roscommon, Ireland.") Frederick was educated at St. Bonaventure's College, St. John's. In 1907, he moved to Bell Island to work as a Filing Clerk with Dominion Company. He was appointed Justice of the Peace in March 1920. Over the years, he contributed writings on local history and lore to several publications. On January 31, 1910, he published a magazine, Red Hematite, as a souvenir of Wabana (no copy found).  He was the editor of Newfoundland's first agricultural journal, Newfoundland Agricultural Magazine, launched in October 1921 (one copy at Memorial University Library). Two of his articles on Bell Island history are: "Fortieth Anniversary of Wabana Mines, Bell Island" in The Daily News year end review, 1934, and "Forty-Fourth Anniversary of Wabana Mines" in The Evening Telegram, Dec. 24, 1938. He was married twice, first to Mary Margaret (Maggie) McCourt (c.1880-c.1914, a piano teacher) in 1904, and second to Lucy Neary (1891-1979) in 1919. He died of heart failure March 12, 1944 and is buried in the Roman Catholic Cemetery, Bell Island. Sources: Encyclopedia of NL; Addison Bown's ​"Newspaper History of Bell Island"; Ron Pumphrey's Who's Who & Why in St. John's, Mount Pearl, Paradise and Conception Bay South, V. 7, 1989-90; F.F. Jardine, "The Earles," in the Bay Roberts Guardian​, Mar. 20, 1943; NL Census; Vital Records.