HISTORY
TRANSPORTATION
FERRIES & THE TICKLE
This page will feature general photos and items about the body of water between Bell Island and Portugal Cove known as The Tickle, and the boats and ferries that have plied it over the years. Items and photos about specific ferries will be featured on off-shoot pages for each ferry. The first item, below the buttons, is a history of Bell Island's ferries written by Addison Bown and featured in the St. John's Daily News on August 31, 1960. For off-shoots of this page, click on the buttons below.
Addison Bown (1905-1988): Journalist; Editor; Historian; Secretary of Wabana Safety Committee; Minister of Supply in 1st Provincial Cabinet; Vice-Chair of Board of Public Utilities. Born Glace Bay, Nova Scotia; moved to Bell Island in 1906 when his father, Thomas Bown, became DISCO Assistant Manager there. Educated Bell Island and St. Bonaventure's College, St. John's. The family moved to St. John's in 1915. Bown returned to Bell Island in 1924 as Secretary of the Wabana Safety Committee, holding that position for 20 years. He was the newspaper correspondent for the St. John's Daily News from 1928-34, and editor of The Bell Island Miner from 1939-44. Premier J. R. Smallwood appointed him Minister of Supply in his first Cabinet in April 1949, but he was defeated in the Harbour Main-Bell Island district in the first provincial election a month later. In 1956, he was appointed Member of the Board of Public Utilities and was Vice-Chairman of that board when he retired in 1973.
Volunteer Activity: First president of the Businessmen's Association, 1949; regional VP of the Newfoundland Board of Trade, 1950; President of the Kiwanis Club, 1955; Chief Civil Defence Warden for Bell Island, 1956; member of the Canadian Authors' Association; executive member of the Newfoundland Historical Society. Source: ​Encyclopedia of Newfoundland and Labrador
Between 1957 and 1960, Bown made his most important contribution to Bell Island's history when he searched through 46 years of the St. John's Daily News to compile and edit his "Newspaper History of Bell Island, 1894-1939." These 2 hand-bound volumes are available at the MUN QE II Library, the St. John's Arts and Culture Centre Library, and Bell Island Library. They contain every article of Bell Island news that was published in The Daily News from the beginnings of the Wabana iron-ore mines through to the end of 1939, including social notes, marriages and deaths, and all things sports-related. He probably considered this work a hobby, but the countless hours of research and writing he must have put into it, along with his commentary and annotations based on local knowledge, have greatly benefited succeeding generations of writers of Bell Island's history and will continue to do so indefinitely. He is also the author of Newfoundland Journeys, published in 1971. Source: ​Encyclopedia of NL.
​
Addison Bown wrote the following comprehensive history of Bell Island ferries on the arrival of the John Guy in August 1960. Reading about the great advances and changes in ferry service down through the years, the old adage still proves true: "The more things change, the more they remain the same." 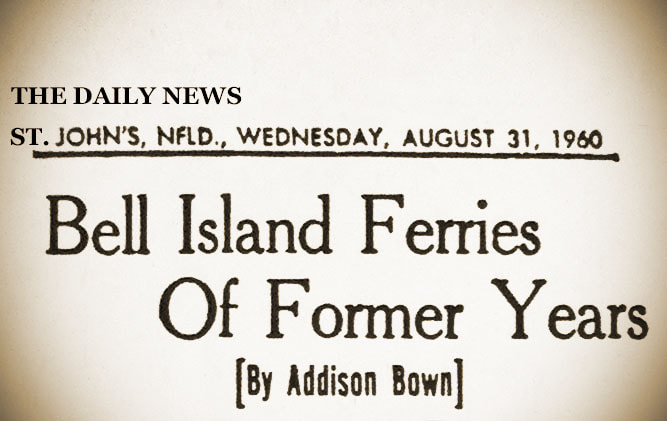 Of the nine provincially-operated ferry services extant in 1982, the Bell Island-Portugal Cove route was the most heavily used, the most highly subsidized, and because of its location and economic environment, the most complex. Bell Island was economically self-sustaining from 1895 to 1960 because of the iron ore mines. The economy of the island collapsed in the 1960s when market conditions forced the mines to close, and the population dropped rapidly, from 13,000 in 1962 to under 6,000 by 1971. Of those who stayed, a growing number acquired jobs off the island and commuted daily or weekly. Out-migration had ceased by 1970 and the population started to increase, creating a demand for increased services. The Federal Government had become financially involved in 1959 when the Department of Transportation agreed to build the M.V. John Guy and lease it to the Newfoundland Transportation Company; the privately-owned service would be subsidized by the Canadian Transportation Commission with terms to be negotiated at the end of each fiscal year, but with no continuing commitment.

The Elmer Jones, which had replaced the Maneco in 1956, served until 1960 when the John Guy entered the service with its companion ship, the M.V. Kipawo. Together they could transport 268 passengers and thirty-four vehicles. When the M.V. Katharine* replaced the Kipawo, capacity increased to 400 passengers and fifty vehicles. Each ferry required two rotating, nine-man crews, who made an average of 10 daily trips in winter and 18 per day during the rest of the year, except during the peak travel months of July and August when 21 daily trips were made. The three kilometer (2.5 miles) trip, which took an average of 20 minutes, had a wide range of fares, from a low of 10 cents for children, 25 cents for senior citizens and $2.50 a week for walk-on commuters, to a high of $40 for a loaded tanker truck. There were no tariffs for such items as packages and newspaper bundles. Taxi services at both terminals were provided. In 1982, the ferries' operators had the only service contract that called for the operator to hold an exclusive franchise under the Newfoundland Ferries Act, (R.S.N. 1970, c.128) and, as such, all its tariffs were regulated by the Public Utilities Board; the rates did not increase between 1952 and 1982.

Based on growth figures and an extensive study of the service, an Appraisal of Newfoundland's Intra Provincial Ferry Services, submitted to the Newfoundland Government in August 1981, recommended that larger ferries, an extended schedule and year-round, two-vessel service would do much to enhance the services between Bell Island and Portugal Cove.
* The M.V. Katharine was built in Denmark in 1968. She was purchased for about $1 million and went into service on the Bell Island run, replacing the Kipawo, in 1974. She served on the Bell Island - Portugal Cove run until about the fall of 1997. In the winter of 2022, the Katharine​ was being used on a service in Puntarenas, Costa Rica.