HISTORY
TRANSPORTATION
FERRIES & THE TICKLE
TRAGEDY IN THE TICKLE
NOVEMBER 10, 1940
Located on The Beach, and facing you as you drive from the ferry towards Beach Hill, this is the Monument to 22 people, mostly miners or family members of miners, who were lost in the collision of the W. Garland and the Little Golden Dawn, Nov. 10, 1940. [Note: Miss Olive Squires is listed as a victim in several articles written at the time of the tragedy. Her name is missing from the monument. I have not been able to find any census or other information, nor birth or death records for her.]
On November 10, 1940 at about 5:30 p.m., the W. Garland, which was used as a passenger ferry between Portugal Cove and Bell Island, left Portugal Cove with twenty‑five passengers plus the Captain, William Abbott of Portugal Cove, and Engineer, Norman Ash, who was also the owner, on board. As it was a Sunday evening, most of the passengers were miners returning after spending the weekend at their homes around Conception Bay. The evening was dark but clear, with occasional snow flurries and a moderate wind from the northeast. The W. Garland did not have a passenger‑carrying license and was not equipped with life belts. A small life boat that was purchased with the vessel was not carried on it. Only the mast‑head light and a search light were working. Bulbs in the port and starboard lights had blown several days earlier. Substitute paraffin lights were available, but the crew did not understand how to install them and their attempts to do so had failed.
At about 5:40 p.m., the Little Golden Dawn, another passenger ferry on the same route, left Bell Island with only the Captain, Archibald Mitchell, and Engineer, Dawson (or Dosten?) Rose, on board. This vessel was licensed to carry freight and passengers. There were life belts on board but no life boats. The captain observed the lights of the W. Garland approaching from some distance, but neglected to check its compass bearings at regular intervals. Both ferries had each other in clear view, unobstructed by snow flurries. About a quarter of a mile from Bell Island it became obvious that they were going to collide, but the captain of the Little Golden Dawn did not blast a warning because his sound signal was not in working order. Instead of pulling to starboard, which is recommended procedure, he pulled to port. At the same time, the captain of the W. Garland pulled to starboard and crashed into the starboard side of the Little Golden Dawn.
The Engineer of the W. Garland, Norman Ash, who was also the owner, was below in the cabin taking the fares when the collision occurred. While the passengers in the cabin all ran to get out, he shouted, “Take your time and see what happens.” One passenger responded with, “It is too late to take your time now. The whole head is gone out of her.” The stem went into the water quickly, and the passengers rushed for the back of the boat. One man got his pant leg caught in the wheel chain and block during the commotion. He broke the wheelhouse glass with his fist and turned the wheel a half‑turn towards him to free himself. He and the owner and two other passengers survived by holding onto debris and were eventually picked up by a rowboat from the Island, which was manned by three men, including Fred Snow, owner of the Little Golden Dawn.

It was less than four minutes from the time of the collision until the W. Garland sank. The Marine Court Inquiry into the disaster was told that her wood was rotten and she was unseaworthy. Twenty‑two passengers and Captain William Abbott drowned. The Little Golden Dawn did not sink right away. Immediately after the collision, the engineer shut off the engine. Then he went back on deck and got hold of the stem of the W. Garland in an attempt to hold her in the wound of the Little Golden Dawn. When this idea failed, he could not get the engine started again. He and the captain put on life belts and proceeded to pump the water that was entering the boat. About forty‑five minutes later, a motor boat towed them to shore, where the ferry quickly sank.

Most of the victims were known and are still remembered by Bell Islanders, as many of them boarded at the homes of residents. One non‑resident miner had a shack on the Island that he lived in during the week. Each weekend he went home to be with his family. Every Sunday when he returned, he would go to a neighbour’s house for a kettle of water. On the Sunday in question, he did not show up. The neighbours became concerned and later learned that he had been among the victims.

The above information is from the Marine Court Inquiry into the Bell Island Disaster of 1940. Other accounts of the event talk of a sudden snow squall that may have obscured the two captains' line of vision.

**********
The motor vessel W. Garland was 18 tons burden and propelled by a 44 h.p. Diesel engine, which gave her a speed of 10 knots. The Little Golden Dawn was 14 tons, equipped with a Diesel engine and capable of steaming 10 knots. Both boats were believed to have been going full speed at the time of the collision.

Following is a list of the victims as reported by Addison Bown in the Observer's Weekly of November 12, 1940. Of the 23 victims, all of whom were on the W. Garland, only 11 bodies were recovered. Those who were recovered are marked with an asterisk. [Note: the number and some names of victims vary from one account to another. I have included as much information as I could find from various accounts and census and vital statistics records. If you find errors, or have other information, please get in touch by email at: historic.wabana@gmail.com.]

*Clarence LeDrew (age c.26), Memorial Street, Bell Island (He was a taxi driver.)
*Inez Tucker (age c.25), Bridal Avenue, Bell Island (She was a secretary in the Main Office and was the only child of Billy Tucker, who was Paymaster with DOSCO. Inez and Clarence LeDrew were engaged to be married in the near future. Local legend has it that when their bodies were recovered the day after the sinking, they were locked in an embrace.)

*Victor North, Finn Street, St. John's (He was a Private in the Nfld. Home Defence, stationed on Bell Island.)

Edgar Spurrell, Broad Cove; (married, his wife, Elizabeth, was pregnant with their 9th child, who was born the following March.)

*James Whelan, Horse Cove Line (He had a wife and 5 children.)

Alexander J. White ​(age 33), Mundy Pond (He was the brother of Elsie White, who was the long-time secretary to the manager of DOSCO on Bell Island. Alex was returning to the Island from his parents' home in St. John's. Elsie would normally have spent the weekend in St. John's as well, but did not go this particular weekend.)

Sources: "Marine Court Inquiry into Bell Island Disaster 1940," GN 2/5:787, The Rooms Provincial Archives of NL; Addison Bown, "Tragic Disaster off Bell Island" in Observer's Weekly, Nov. 12, 1940, pp. 6 & 11; Sydney Bown, personal interview, Mar. 8, 1991.
Below is the front page of the Daily News of Nov. 11, 1940 the day after the collision of the Garland and Little Golden Dawn in The Tickle. Addison Bown was editor of the Bell Island Miner newspaper at that time and contributed to the Daily News for many years. Photo courtesy of his daughter, Loretta. 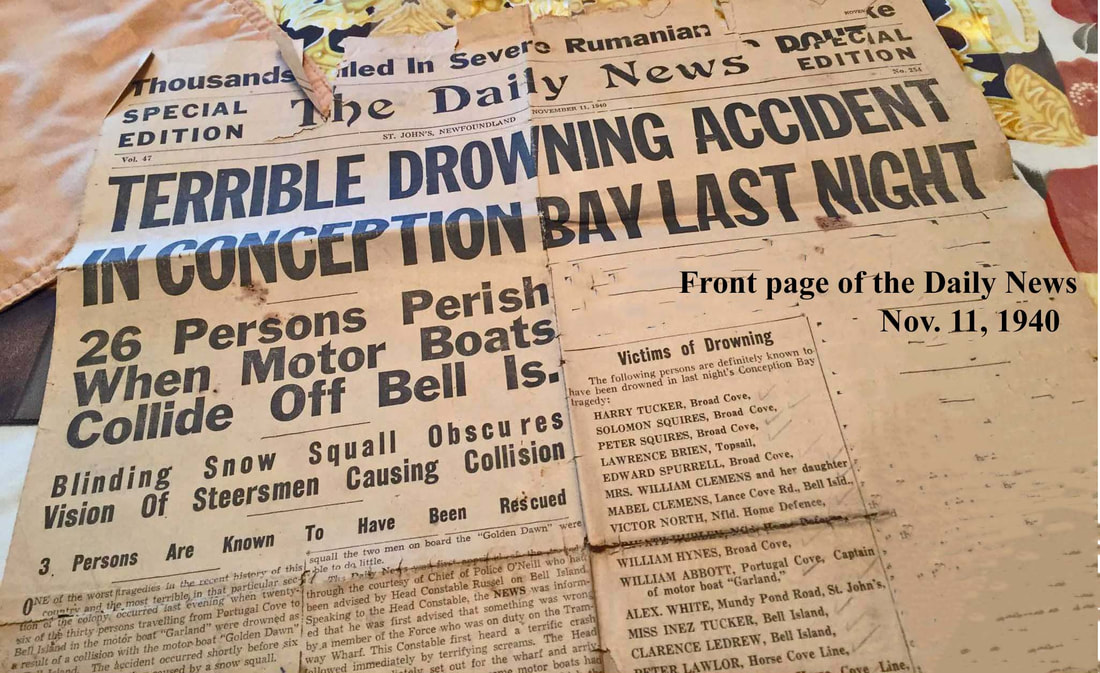 On the 21st anniversary of the disaster, a poem written by Joe Pynn, who played an important role in the rescue and salvage operations, was published in the November 22, 1961 Wabana Star​, pp. 29-30:
The Garland Disaster
​by Joseph Pynn
The Bay is in sad mourning, from Bell Island came sad news,
To hear about this tragedy, which had all hands confused.

It happened in the Tickle here, upon one Sunday night,
When the Garland struck the Golden Dawn, soon filled, and sank from sight.

Now, when the Garland left the Cove, as you may understand,
She had Norman Ash as engineer and Abbott in command.

She shipped her course for Kelly's Wharf, and steamed towards The Beach,
Not fearing any danger of the distance they do reach.

When the Garland left the Cove, the wind was North, Northeast,
The Golden Dawn had just arrived, with passengers from Clarke's Beach.

The Golden Dawn, she shift her course, as you may understand,
She had Dosten Rose as engineer, and Mitchell in command.

She had not been long left The Beach, scarce minutes three or four,
​When people heard some screaming, while standing on the shore.

A young man standing on the wharf, rushed without delay,
Called Fred Snow to get a boat, for rescue right away.

Now, Mr. Snow and Walter Dicks, did quickly in haste embark,
To rescue those still alive, although it was so dark.

Searchlights on The Beach did shine, across the Tickle bright,
To guide the boats while searching there, but got no success that night.

The ones that night were rescued, were Tucker and Norman Ash,
While Quilty and his cousin were rescued from a hatch.

There was Hector Hibbs, a sailor bold, who ploughed the ocean deep,
He passed away whilst in the boat, before they reached The Beach.

There was one aged lady, Mrs. Clements was her name,
She passed away that very night, while respiration was in vain.

There is twenty more we do recall, and you know their names quite well,
May God have mercy on their souls, and in Heaven may they dwell.