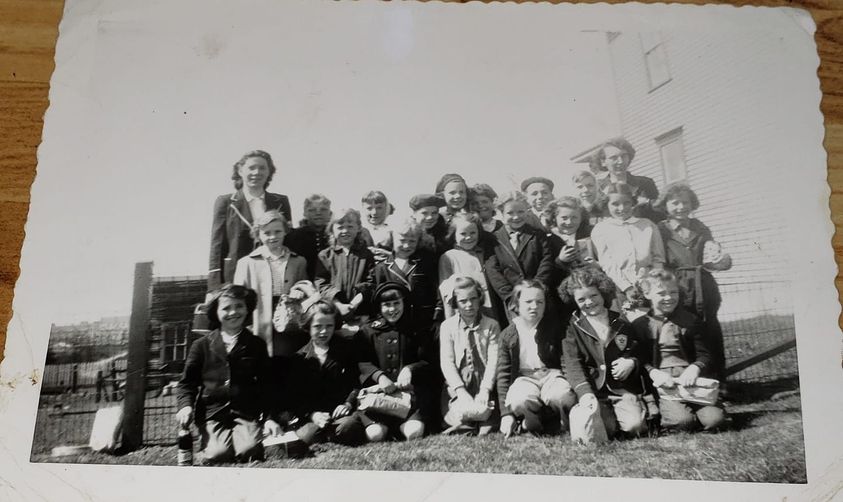 In October 1958, two articles regarding the formation of Girl Guide Associations at St. Edwards Academy, the Front, and Immaculate Conception Academy, the Mines, appeared together in the Evening Telegram. The first article reported on a meeting held on Monday night, October 27th in St. Michael's Hall, and referred only to St. Edward's Academy, with Monica Bown being elected as District Commissioner. The second article referred to two meetings, the first meeting on Friday, October 17th was for both schools. The second meeting on October 29th seemed to be for Immaculate Conception Academy, where Josephine Murphy was elected District Commissioner. Below is a transcript of the two articles as they appeared in the Evening Telegram:
Local Ass'n Girl Guides Formed
​A meeting of those interested in forming a Girl Guide Association, comprising the pupils of St. Edwards Academy, the Front, Bell Island, was held on Monday night, October 27th in St. Michael's Hall. A large number of ladies attended this meeting and it was unanimously decided to form a branch of the Guides, with Mrs. Sydney [Monica] Bown as District Commissioner.

A local Association to assist the Girl Guide Movement was formed, the executive of which is as follows:
President: Mrs. Robert Cardwell
Secretary: Mrs. Robert Kent
Treasurer: Mrs. William Butler
​Girl Guide Trainer Visits
On Friday, October 17, [1958] Mrs. Jenkins, Girl Guide Trainer and Secretary of the provincial office for our Newfoundland Girl Guides, visited Bell Island. During her visit, she had a chat with the teachers and parents of the girls from the Immaculate Conception Academy, the Mines, and St. Edward's Academy, the Front.

She explained that district commissioners, captains, sub-lieutenants, guiders, etc., were needed to carry on the Girl Guide movement on Bell Island, where guiding has been almost dormant until the present time. There has been nothing of great interest for our girls here, but with the coming of the Guide Movement, we feel that the girls will find themselves fully occupied. We should, after a period of time, be able to train many efficient Girl Guides.

A meeting to form a district local association was held on October 29. District Commissioner Mrs. Brian [Josephine] Murphy told the ladies why this association was needed and we were successful in electing a few of the officers. We have no Mrs. Joan McLean as president; Mrs. Rhoda Kent as secretary; and Mrs. Frank Leonard as treasurer. At a future meeting, we hope to complete the other vacancies and plan to become the nucleus of our Girl Guide Companies.
On page 2 of the February 1959 issue of the Submarine Miner, under "News of Local Interest," the following was reported:

Activity in the Girl Guide movement was stepped up in January when twenty Guiders from St. Edward's and Immaculate Conception Academys were enrolled in the Association by Mrs. E. Jenkins and Miss A. Chapwood, Girl Guide trainees from St. John's. Mrs. Sydney Bown and Mrs. Bride [should this be "Brian"?] Murphy were also enrolled. Following the enrollment, training was conducted at St. Edward's Academy. Brownies and Guides were also on hand for the training classes. It is expected that a great many more will be enrolled during this month.
The newspaper photo below from the Evening Telegram of June 25, 1959 shows that membership in the Guides had grown from 20 in February of that year to 164 only four months later. 72 Guides and Brownies were from District 1 (St. Edward's Academy), under Commissioner Monica Bown, and 92 were from District 2 (Immaculate Conception), under Commissioner Josephine Murphy. They were on their way to St. John's for the Royal Visit of Queen Elizabeth and Prince Philip. They lined up on Elizabeth Avenue to watch the Royal procession go by. The Guides were treated to chocolate bars and fruit by the St. John's Guides before returning on the 5:30 ferry. Newspaper clipping courtesy of Eileen Kavanagh. 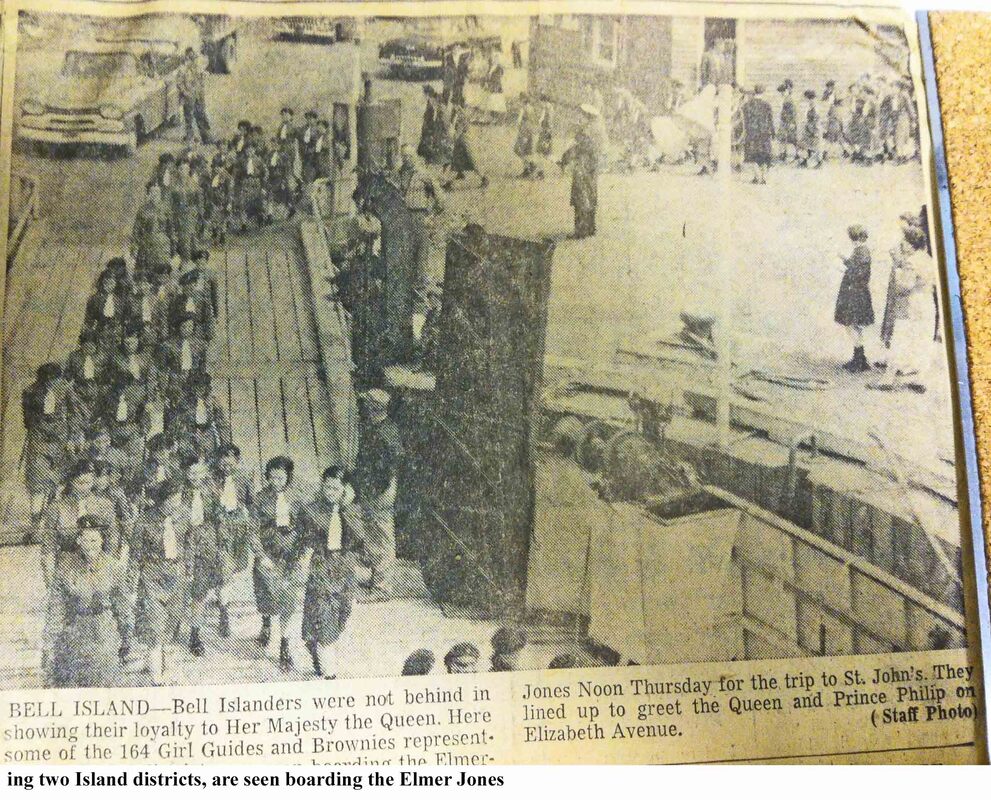 From a Facebook comment under a post of the newspaper clipping above, Barbara Alcock wrote: There was a "lone Girl Guide Company" on Bell Island during this same period. It was formed by the very capable Patsy Smith (daughter of Anglican minister, Rev. Smith). Meetings were held at her home. Cheryl Rees, Linda Skanes, Sandra Bennett, Vivian Randell with part of this group. We even attended Girl Guide Camp in ?Bay Roberts."