HISTORY
HEALTH
EPIDEMICS IN THE MINING YEARS
by Gail Hussey-Weir
created April 2020
As I write this in April 2020, the novel Coronavirus, Covid-19, is raging throughout the world, and there are universal orders for people to stay at home to help prevent the spread of this virus for which there is presently no cure and no vaccine.

Covid-19 has brought back a word that was common during the mining years on Bell Island when communicable diseases were always a threat and often deadly. That word is QUARANTINE and it struck fear in the heart of anyone who came upon a quarantine sign on a house where someone was ill. 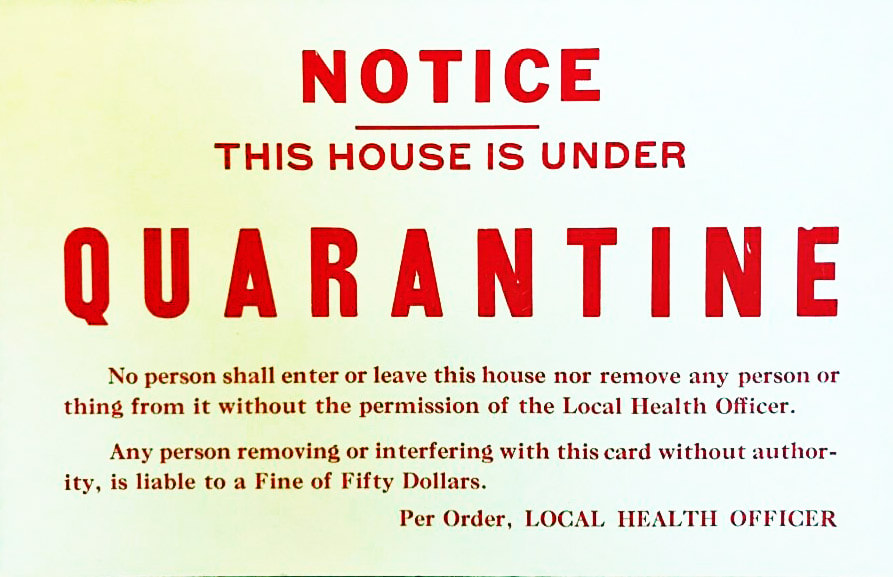 ​​Here (in alphabetical order by disease) are reports from the St. John's Daily News and other sources of some of the epidemics that were common in Newfoundland and how they affected the people of Bell Island:
CHICKEN POX
I do not have any figures specific to Bell Island regarding Chicken Pox, but it was a common contagion until a vaccine became available in Canada in 1999.
DIPHTHERIA
In May 1933, "a case of Diphtheria was discovered at the Staff House, which was placed under quarantine. The patient was Veronica Farrell."

"An epidemic of Diphtheria broke out in the Fall of 1937. Drs. Lynch and Templeman were kept busy giving inoculations. The theatres were closed because of the outbreak (and were still closed at Christmas time). Drs. J.B. St. Knight and A. Bishop of the Department of Health visited the Island in connection with it. At least one death occurred among children because of the disease, the victim being Margaret Andrews, age 8."

​In February 1939, "Dr. James McGrath (later Minister of Health) and Dr. J. Peters set up a clinic in the Masonic Hall to inoculate residents against Diphtheria and Typhoid, and were conducting X-rays for Tuberculosis."

​In 1924, there were 9,000 cases of Diphtheria reported in Canada; it was one of the most common causes of death of children from 1 to 5 years of age. The Diphtheria vaccine became available in 1930.
DYSENTERY
"There was a severe epidemic of Dysentery among small children in the Summer of 1932. 51 deaths occurred on Bell Island among children under one year old between August and October. Among adults, the following were called by death: Henry Hibbs, 56; Mrs. Elizabeth O'Toole, 90; Joseph King, 25."

There is no vaccine against Dysentery at this time.
INFLUENZA aka FLU
In an outbreak of Influenza in February 1935, three Bell Island nurses, Bown, Bowdring and Skanes, were called to St. John's to assist the nursing staff of the General Hospital during that epidemic. Two Bell Island doctors were down with the Flu at the time.

Then, in February 1939, another Flu epidemic hit Bell Island: "A severe epidemic of Flu was experienced in February and 2,000 cases were reported locally. Working time in the mines was seriously affected as 800 miners were down with the Flu at one time." There was no follow-up information on whether or not there were any deaths recorded due to this outbreak.

Influenza vaccination began in the North America about 1945. New versions of Flu vaccines are now developed twice a year as the Influenza virus rapidly changes.
An especially bad strain of Influenza was called SPANISH FLU aka LA GRIPPE
"A terrible epidemic of La Grippe, or Spanish Influenza (popularly known as "the Flu") struck the world in the last year of the Great War, numbering its victims by the hundreds of thousands. The first cases were reported in St. John's on October 4, 1918. By the 14th, all schools, theatres and halls were closed, and the Seamen's Institute on Water Street was taken over as a hospital. Eight deaths occurred in the city in 24 hours on October 24th. The Flu was then reaching alarming proportions and all churches were closed on October 29th."

"Dr. J.B. Lynch reported 20 cases of Flu and two deaths in one week. The three doctors on the Island at the time, Drs. Carnochan, Giovannetti and Lynch, were working day and night to cope with the epidemic."

"Theresa Josephine Kent, eldest daughter of E.J. and Mrs. Kent, died on October 23rd at the age of 12."

"The Daily News published a letter on November 2nd signed "Anxious Parent" re sanitary conditions on the Island. It reported that five persons had died that week from the Flu and that hundreds were sick. The letter suggested that a Public Health Inspector from St. John's should spend a month on Bell Island looking into conditions."

While the Daily News article says the first cases were reported in St. John's in October 1918, death records show that "La Grippe" was given as the cause of death of Robert Normore of Bell Island on May 27, 1918, John Thomas Carew on June 12th, George Basha, age 6, on July 12th, and Margaret Bowdren on September 4th. Death records for 1918 show that at least 17 people died of Influenza on Bell Island that year.
MEASLES (RUBEOLA) AND GERMAN MEASLES (RUBELLA)
In the first decade of the 20th Century in Newfoundland, Measles (Rubeola) killed many children and was frequently fatally epidemic, claiming 177 lives in 1906 and 448 in 1916. Source: A.B. Perlin, "History and Health in Newfoundland," Canadian Journal of Public Health, V. 61, No. 4, July/August 1970, pp. 313-316.

In April 1908, there was an epidemic of measles on Bell Island and many houses were quarantined.

German Measles (Rubella) is a milder disease, but is of particular concern because if a pregnant woman becomes infected, the virus can cause severe birth defects.

​The first Measles (Rubeola) vaccine was approved in 1963. The German Measles (Rubella) vaccine was introduced in 1969.
MUMPS
I do not have any figures specific to Bell Island regarding Mumps, but it was a common contagion until a vaccine became available in Canada in 1969.
POLIO
With a total of 232 cases reported for Newfoundland, the 1953 outbreak of Poliomyelitis had the highest number since accurate recording of infectious diseases was instituted by the Department of Health. [I do not have the numbers for Bell Island, but I know of at least two children who were affected by the disease at that time.] Schools did not open until September 21st that year in an effort to contain the spread of the disease. Children of school age were also barred from churches and cinemas for the same period. Source: A.O.D. McDermott, "Poliomyelitis in the Province of Newfoundland, 1953, Canadian Journal of Public Health, ​V. 45, No. 7, July 1954, pp. 284-288.

The Salk Polio vaccine was licensed in 1955. Trivalent oral Polio vaccine was licensed in Canada in 1962. Canada was certified Polio-free in 1994.
SCARLET FEVER
In the winter of 1933, "the hotel of Edward Parsons on the Green was quarantined for 21 days as Madge Greenland, teacher, had contracted Scarlet Fever. There was an epidemic of that disease locally, the first patient being Mrs. G.H. Haines." Source: Addison Bown, "Newspaper History of Bell Island," p. 48, 1933.

There is no vaccine to prevent Scarlet Fever.
SMALLPOX
There was an epidemic of Smallpox on Bell Island in February 1918 when 10 houses were quarantined. It became necessary to close the schools for a time to prevent the spread of the disease.

Smallpox vaccine was available in Canada from 1885. Routine Smallpox vaccination was stopped in 1972. Global eradication of Smallpox was certified in 1980.
TYPHOID FEVER
In the Fall of 1912, "Government Health Officer, Dr. Brehm, was on Bell Island investigating the sanitary conditions. Wm. Parmiter was ill of Typhoid Fever at that time and was attended by Dr. Cron of Harbour Grace."

"The first case of Typhoid Fever in 15 years was reported in the Spring of 1930."
​
In February 1939, "Dr. James McGrath (later Minister of Health) and Dr. J. Peters set up a clinic in the Masonic Hall to inoculate residents against Diphtheria and Typhoid, and were conducting X-rays for Tuberculosis."
TUBERCULOSIS
Tuberculosis was described as Newfoundland's "greatest scourge" by A.B. Perlin in 1970. In the first decade of the 1900s, when the Bell Island mining operation was in its building period, about 800 Newfoundlanders a year were dying of what was commonly known as TB. In 1936, a survey found an incidence of approximately 20,000 cases of active or incipient Tuberculosis in Newfoundland. "The wonder was that the whole population had not been infected and the assumption was that a great many people must have acquired a natural immunity." Source: A.B. Perlin, "History and Health in Newfoundland," Canadian Journal of Public Health, V. 61, No. 4, July/August 1970, pp. 313-316.

BCG vaccine for Tuberculosis was first used in 1921. It was discontinued in Canada as a routine vaccination in the early 1970s.

Tuberculosis was still a problem in the 1950s as can be seen from this photo from the December 1956 issue of the Submarine Miner,​ p. 7. 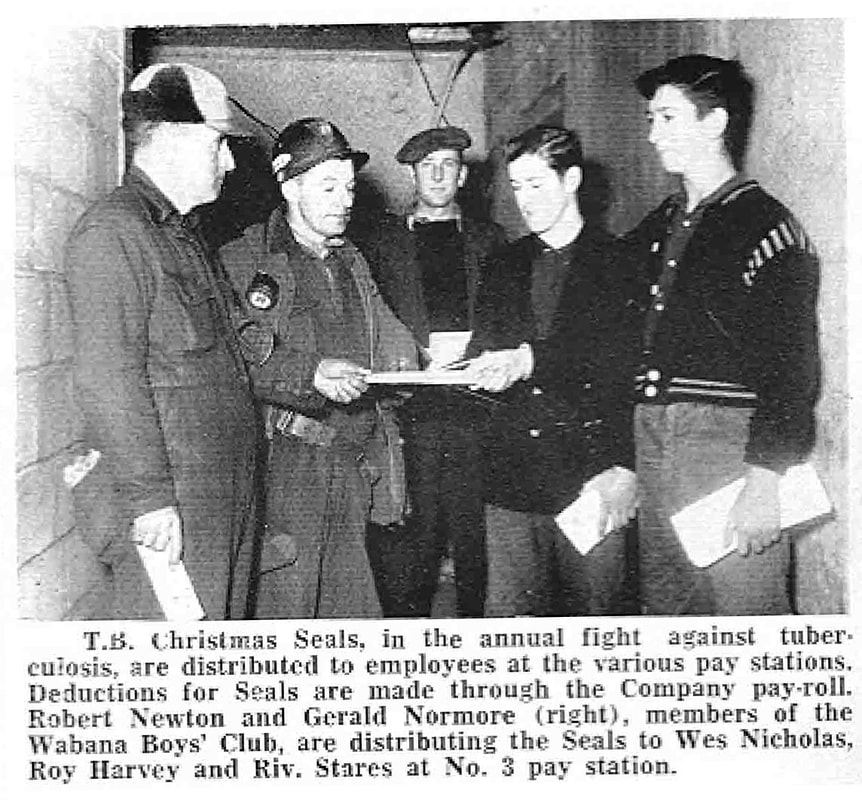 I do not have records for the number of Bell Islanders who suffered from the effects of Tuberculosis, but in May 1961, "A mass chest clinic opened at the Miners' Union Hall. Local medical authorities pointed out there has been a recurrence of Tuberculosis during the past few months."
WHOOPING COUGH (PERTUSSIS)
In the first half of the last century, Whooping Cough was often a catastrophic menace in Newfoundland, where it took 145 young lives in 1907, 280 in 1909 and 101 in 1916. Source: A.B. Perlin, "History and Health in Newfoundland," Canadian Journal of Public Health, V. 61, No. 4, July/August 1970, pp. 313-316.