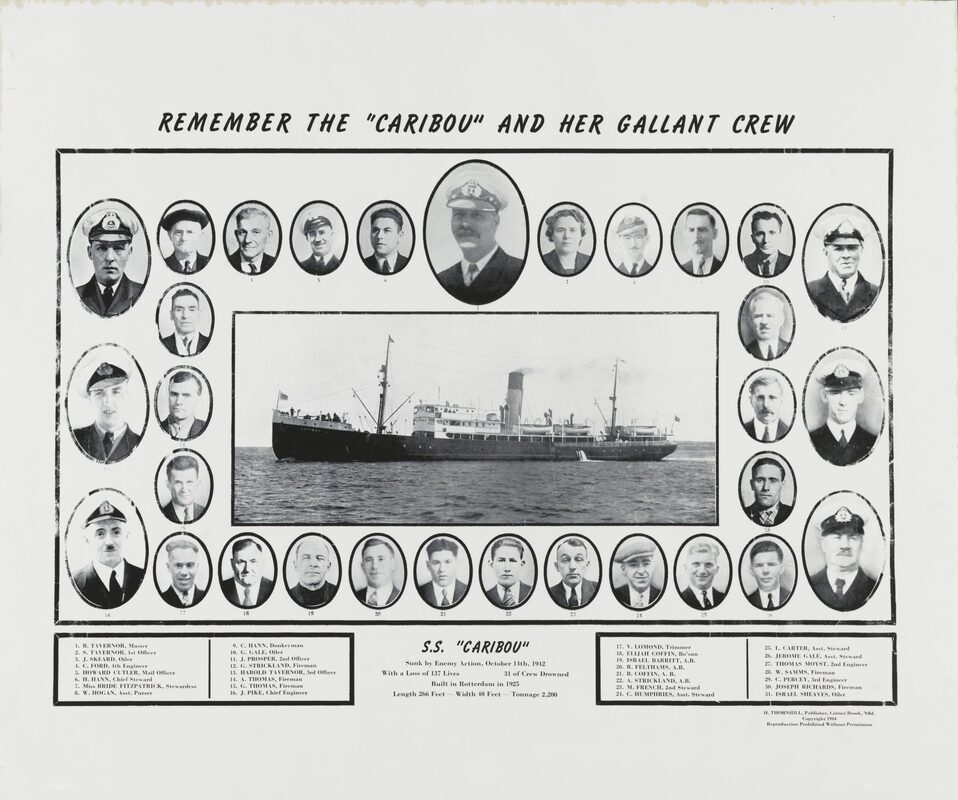 The S.S. Caribou was built in Rotterdam, Netherlands in 1925 for the Newfoundland Railway to operate as a passenger/rail ferry between Port aux Basques, NL, and North Sydney, NS. On October 14, 1942, she was heading for Port aux Basques in an overnight crossing and was 25 miles south of that port when she was sunk by the German submarine U-69. She was a civilian vessel with women and children amongst the 192 passengers. Many others were military, who travelled on the ferries to Newfoundland, where there were several military bases with Canadian, British and American personnel. Also on board was some livestock, rail cars and other cargo. Of the 46 crew members of the S.S. 'Caribou', 31 died, including her captain and his two sons. Of the 118 Canadian, British and American armed services personnel, 57 died. And of the 74 civilians aboard the Caribou that early morning, 49 perished. 136 people in all were lost.

There were at least five passengers on the Caribou that fateful night who had some connection to Bell Island, one of whom survived and four who died:

1. Oda Blanche Wilson Allen, 2. Carol Ann Allen, 3. Constance Melbina Allen, the wife and children of Bell Island-born Gordon Wallace Allen:
Oda Blanche Wilson Allen was born August 13, 1916, the daughter of David and Cora Lorne Wilson of Tancook Island, Lunenburg County, NS. She married Gordon Wallace Allen in 1938 in Cape Breton County, NS. Reverend Gordon Wallace Allen, the Pastor of the Pentecostal Church on Big Tancook Island, Lunenburg County, NS, was born on Bell Island, NL, c.1910, to Julia and Robert Allen, a miner. Oda and Gordon had two young daughters, Carol Ann, age 3 1/2 years, and Constance Melbina, age 1 year, who were travelling with their mother on the Caribou that night. They were journeying to Bell Island to join Gordon, who had been visiting with his ill parents. Oda's body was recovered, fully dressed but without shoes. The children's bodies were not found. Oda's body was subsequently identified by her husband and laid to rest in the Tancook Island Baptist Cemetery in Nova Scotia.

4. Hugh B. Gillis was Superintendent of Mines and Quarries with Dominion Steel and Coal Corporation. He visited Newfoundland regularly to inspect DOSCO's limstone operation at Aguathuna on the Port au Port Peninsula, and the iron ore mines at Wabana, where he was well-known. On October 14, 1942, he was bound for Aguathuna. His body was recovered.

5. Eric Rupert Andrews was born to Gwendolyn and Charles Andrews in St. John's East in 1919. Before 1921, the family moved to Bell Island, where Charlie Andrews became a barber. Eric was attested in the Royal Navy in November 1939, shortly after the outbreak of World War II. He served overseas from Nov. 27, 1939 to Jan. 1, 1945, when he was repatriated to Newfoundland.

On October 14, 1942, he was enroute to Bell Island when the Caribou was torpedoed. He survived that tragedy and the following account was published shortly afterwards in the local newspaper:

Seaman Eric Andrews, son of Mr. And Mrs. Chas. Andrews, returned home during the past week on leave after his rescue from the torpedoed Caribou. This sinking made the seventh torpedoing that he has survived in the war. But, he says, "I want to forget the Caribou. The screaming of the women and children was awful. It was the worst experience I ever went through."
When the Caribou was torpedoed, Seaman Andrews was awakened by the explosion. The first thing he did was to open his suitcase and secure a flashlight, then he made for the deck. Everything was in darkness. When he came to the stairway, it was crowded with people making their way up and he stayed at the foot of the stairs to show the way with his light until all had gone up. When he himself reached the deck, the ship was taking the final plunge. Her boilers exploded and he was thrown into the sea.
After he came to the surface, he states that he went under again, probably from the suction of the ship. He rose to the surface again and all this time he had the presence of mind to hold on to his flashlight. To this fact he owes his life in large measure. By its light he saw a barrel bobbing on the water and swam over to it. Then he saw a piece of wreckage and made for that. Finally he saw a raft and making his way to this he stayed there until he was picked up after daylight.
Seaman Andrews lost all his belongings but was uninjured and is thankful for his escape after an unforgettable experience.

Eric Andrews died at age 88 in Bowmanville, ON, April 6, 2007, predeceased by his wife, Ethel. On October 15, 2012, his ashes were cast on the waters over the sunken Caribou by his son, Charlie.