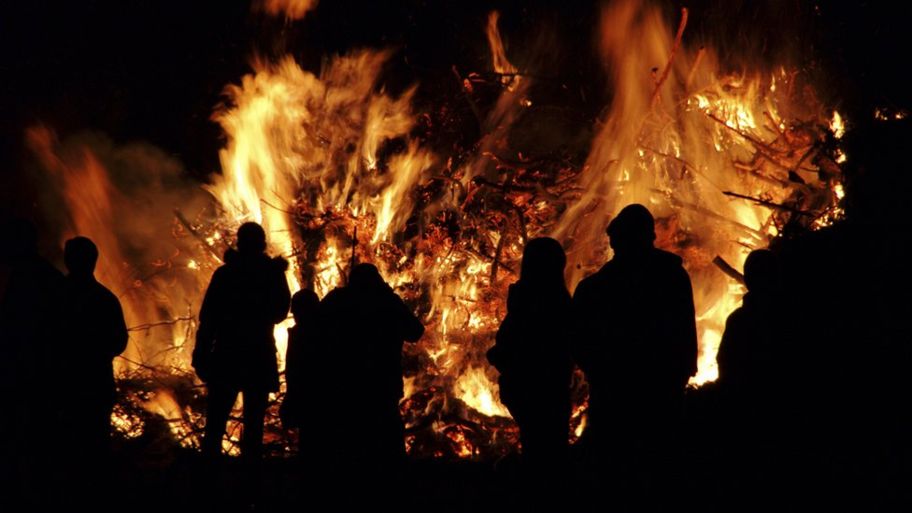 Bonfire Night is the common name for what is known as Guy Fawkes Night in England. It marks the anniversary of the discovery of a plot organized by Catholic conspirators to blow up the Houses of Parliament in London in 1605. In England, an effigy of Guy Fawkes is usually burned and fireworks are a big part of the annual celebration, but those things don't play a part on this side of the Atlantic.

Bonfire Night was never a public holiday, but a highly-anticipated evening event late in the Fall as it became darker earlier.

In many Newfoundland communities throughout the years, bonfires would be lit in neighbourhoods so that no one had to travel far from home on foot to enjoy the fire. On Bell Island, there would be many small bonfires and some large ones depending on the density of the population in that area. As the population of Bell Island has dwindled over the years since the mines closed in 1966, there is usually just one bonfire lit. In St. John's and some other larger towns, town councils now regulate the lighting of bonfires.


The following memories of Bonfire Night on Bell Island are excerpts from interviews done in the 1990s:

Ned: Bonfire Night was a must. We'd have it on Lance Cove beach. At that time, there were no tires like they have now. You'd get the blasty boughs then. The trees are cut down in the summer and they get right red. Put a match to them and they're gone. That's why they're called blasty boughs. You'd have loads of these, and old sticks, dried sticks. That's all you'd have. And then the fishermen, they'd have blubber. Oh boy, oh boy.

Gail: Would you rob people's yards and take fences and things like that?

Ned: No, no, no. We wouldn't do anything like that. No, the people were more civilized then.

Jean: We would have a Bonfire Night, Guy Fawkes Night. That was a bigger celebration in one way than Hallowe'en because that night you went out and you had your bonfire and you roasted potatoes and so on.

Pat: Bonfire Night was a big night for us when we were growing up. We'd burn nothing only pork barrels and oil barrels in those days. We'd never burn a tree or anything like that. We used to get pork barrels off the shopkeepers. We'd get the oil barrels off the mining Company. They used to give them to us. We'd stack them up about 10 or 15 feet high and light the barrels. When the barrels were burned, that was the end of it. We'd have that right behind the Curling Club. There was a meadow there. That's where we used to have our bonfires.

Gail: So you wouldn't steal things, like, I remember when I was growing up (in the 1950s-60s), sometimes they'd steal somebody's outhouse or gate or things like that to burn on Bonfire Night.

Pat: Well, the only thing ever I know when we were growing up was some feller would take another person's water barrel. They used to bring water and put it in the barrels. A scattered water barrel would be stolen, but nobody knew who stole it. That would happen at night.

Before World War II, there would always be a big bonfire on the back of the Island near the air strip. They stopped it during the war because of black-out regulations.

We lived on Tucker Street, off Armoury Road, and the wooded land behind our house was owned by Tom Skanes, who lived on Armoury Road. One year in the late 1950s, some boys on the street stole barrels from Bruce Tucker. He had a supermarket on Town Square. They hid the barrels in Skanes' woods waiting for Bonfire Night, but someone told on them and Bruce contacted them and said that if they brought the barrels back, he wouldn't call the police on them. They were rolling the barrels through our yard one night on their way back to Tucker's store when I heard one of them say, "Suppose he got the police there waiting for us when we get there?" (Apparently he didn't and they escaped a reprimand on this occasion.)

My memory of Bonfire Night in the 1950s-60s was that boys would spend the weeks before November 5th scavenging whatever they could find in the way of old wood to burn on the fire. Under cover of darkness, "bad" boys would steal anything that wasn't nailed down, and some things that were! I recall small gangs of boys passing us "trick-or-treaters" as we went door to door on Hallowe'en night. They were taking advantage of the occasion to grab things from people's yards after they'd gotten their treats.

On Bonfire Night, every neighbourhood on the Island would have its own impromptu bonfire. Those of us living around Armoury Road would gather at Henry King's meadow, the same spot that would freeze over in winter to form a small skating rink for us.