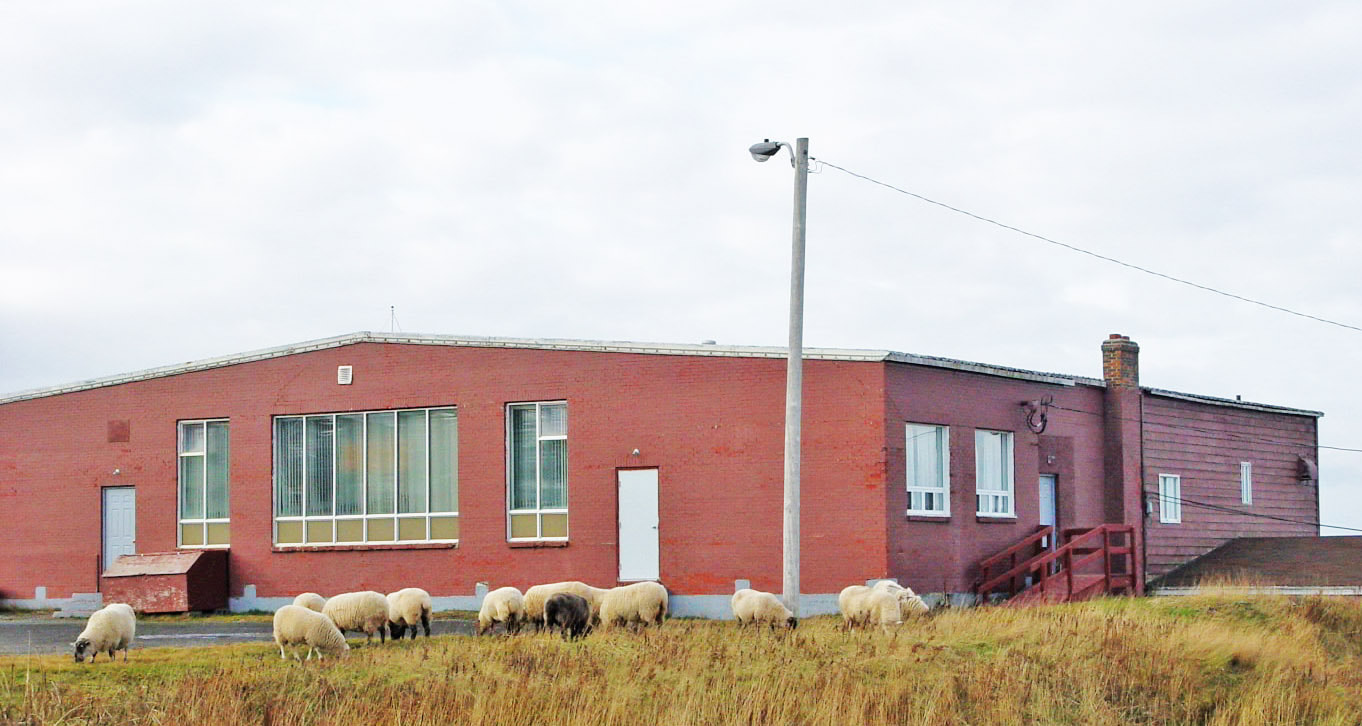 ​On February 24, 1920, the question of a suitable war memorial for Bell Island was raised in a meeting of the Great War Veterans Association at the Star Hall and a fundraising campaign was started to raise money for club rooms for veterans. Instead of club rooms, a monument was erected in 1921.

​In September 1948, the G.W.V.A. began construction of their "Memorial Building."

On January 14, 1949, the G.W.V.A. Bowling Alleys, situated on the ground floor of the G.W.V.A. Memorial Building which was begun in September 1948, were opened.

On October 10, 1949, a resolution to merge with the Canadian Legion was proposed and passed unanimously by the Dominion Conference of the G.W.V.A., which was meeting on Bell Island at the time. [Note: The Legion was founded as the Canadian Legion of the British Empire Service League (often shortened to B.E.S.L.) in Winnipeg in 1925, and incorporated by a special Act of Parliament; it was issued its Charter in 1926.]

On November 11, 1957, a new annex to the Canadian Legion Memorial Building was officially opened.

​On November 8, 1958, the present-day Legion building was officially opened.

On April 4, 1959, new colors were presented to the Legion following the loss of the old ones in the 1958 fire.
The Great War Veterans Association ​(G.W.V.A.)
The Forerunner of the Canadian Legion in Newfoundland & Labrador
​In 1918, the Constitution and By-Laws of the Great War Veterans' Association of Newfoundland (G.W.V.A.) were published. (During the Great War, which has become known as World War I, the G.W.V.A. was known as "The Returned Soldiers and Rejected Volunteers Association.")

On February 24, 1920, the president of Bell Island's G.W.V.A. presided over a meeting at the Star Hall to discuss a suitable war memorial for Bell Island. The first proposal was to build club rooms for war veterans, but at another meeting in April, the idea of a memorial hospital was favoured. Due to economic conditions at the time, this idea was abandoned and it was decided to erect a monument to the Island's fallen military members, which was erected in 1921.

In the Summer of 1938, Sir Bruce Porter, who was chief medical officer in charge of the Third London Hospital at Wandsworth during the war and had charge of many wounded Newfoundland soldiers, came to Newfoundland and visited Bell Island during his stay in the country. He was accompanied by his niece, Mrs. C.A. Johnston, among others. At the Beach, two members of the First Five Hundred, Comrades A.S. Murray and William J. Somerton, were on hand to greet them, as well as other members of the local branch of the Great War Veterans Association. Sir Bruce laid a wreath of Poppies and Forget-Me-Nots at the War Memorial. After a tour of the Island, a luncheon was served at the Staff House by Miss Nellie Forward and her assistants. The guests were Magistrate M. Hollett, DOSCO Manager C.B. Archibald, and Drs. Lynch and Templeman. A large number of veterans paraded at the C.L.B. Armoury and met the distinguished visitor. A.S. Murray, on behalf of the local branch, presented him with an inkwell made of Wabana ore, and Ella Somerton presented a bouquet to his niece, Mrs. Johnston.

On July 13, 1939, the local branch of the G.W.V.A. was reorganized by the Dominion President, Major F.W. Marshall, M.B.E. A dozen or so officials attended from St. John's. Comrade A.S. Murray, one of the First Five Hundred, conducted the meeting in the CLB Armoury, and Major Marshall outlined the ideals of the Association. Other speakers included Rev. N.S. Noel and Rev. W.J. Woolfrey. Malcolm Hollett, S.M., was elected President, with Nath. Morgan, secretary-treasurer.

In September 1948, the G.W.V.A. began construction of their "Memorial Building," seen in the March 1958 Daily News photo below. In December 1948, the meeting and club room facilities, which were nearing completion, were described as "second to none in Newfoundland." The building was in two sections. "The basement was 105 feet long by 24 feet wide and contained bowling alleys, canteens, toilets and dressing rooms for either sex." The upper section consisted of "a large hall with separate ladies' and gents' cloakrooms and toilets, and also a library. This section of the building was 90 feet by 24 feet. There were also two wings each 28 feet by 24 feet. Two bowling alleys were installed in December by Brunswick Company of Canada and will be open to the public in the New Year...The new G.W.V.A. club-rooms are designed to form a memorial to the memory of those gallant men from the Iron Isle who paid the Supreme Sacrifice in World War II." Source: Daily News, December 31, 1948, p. 70. 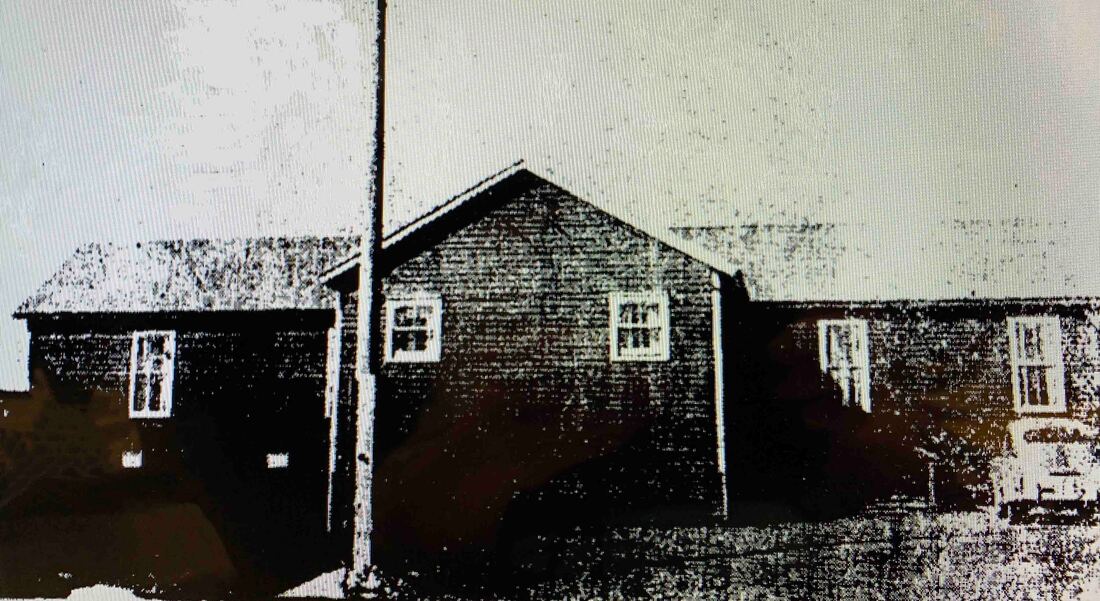 The photo below from the Submarine Miner, July 1955, p. 8 shows the St. Kevin's Army Cadet Corps "near the Legion Building" as they wait to parade to the War Memorial to observe Memorial Day, July 3, 1955. 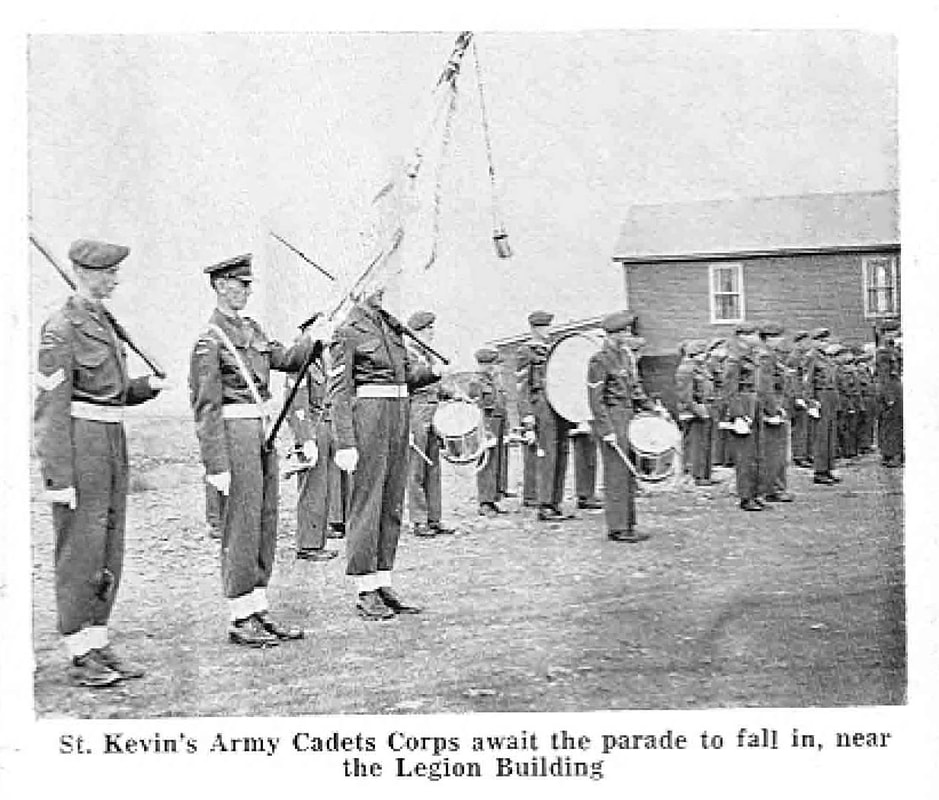 The Canadian Legion, later the Royal Canadian Legion
In 1949, when Newfoundland became a province of Canada, the G.W.V.A. amalgamated with the Canadian Legion. Following is the annual report of the Bell Island G.W.V.A. activities for 1949, compiled by B.W. (Bert) Tucker, as published in the December 31, 1949 issue of the Daily News, p. 68:

The past year was perhaps the most momentous one in the history of the Bell Island branch of the G.W.V.A. A prodigious amount of work was done and the groundwork for a bigger and better organization was laid. There still remains a lot of toil and heartbreaks before the goal is reached but ex-servicemen feel confident that before many years have passed they will have built an organization second to none in the community.

Following are the important events which took place during 1949:-

Jan. 14.   The G.W.V.A. Bowling Alleys, situated on the ground floor of the G.W.V.A. Memorial Building which was begun in September, 1948, were opened. Later a bowling series was run off with 60 teams competing. The "Rays" won the men's and the "Hawks" the ladies' championship.

Mar. 31st.   Comrades J.J. Nolan and M.D. Hutchings were elected to attend Dominion Conference. Alternatives were W.T. Jardine and F.B. Squire. Building Committee, which supervised construction of Memorial Building, were dissolved. Responsibilities to be taken over by the Board of Trustees. Resolution concerning the affiliation of the G.W.V.A. with the Canadian Legion was presented and passed, and later forwarded to Dominion Command.

Apr. 28th.   Rules and regulations regarding the powers of the Board of Trustees in regard to the Memorial Building were drawn up and accepted at a general meeting.

June 26th.   Bronze plaque unveiled at special ceremony at War Memorial by Premier J.R. Smallwood. Plaque contained names of servicemen from Bell Island who lost their lives in World War II. Heads (or their delegates) of the Canadian Army, Navy and Air Force in Newfoundland attended as also did President F.W. Marshall of Dominion Command.

Aug. 31st.   Visit of the Governor-General of Canada to the Island. His Excellency Field Marshall Alexander was met on landing by a guard of honour under command of W.T. Jardine.

Oct. 10th.   Dominion Conference opened at Masonic Club Rooms. Delegates from all over Newfoundland attended. This was the first Conference of this nature to be held on Bell Island since the formation of the organization in Nfld. At this Conference a resolution to merge with the Canadian Legion was proposed and passed unanimously. The visitors were entertained during the four-day stay by a dance and card game on Monday night; by a visit to No. 2 Mine on Tuesday morning and a banquet was held in the C.L.B. Armoury on Wednesday night.

Nov. 3rd.   Installation of air-conditioning unit was completed at Memorial Building. Just prior to this, the interior of the ground floor of the building had been painted.

Nov. 28th.   Work on installation of two additional alleys was started. This was finished on Dec. 12th. Tel-e-foul lights (automatic foul judges) were also installed at this time.
Even though the December 1948 year-end report of G.W.V.A. activities stated that the new Memorial Building was nearing completion and the bowling alleys located on the lower floor were in use, it seems from the year-end report in the December 31, 1950 Daily News, page 58, that the club and meeting rooms on the main floor were not yet finished:

The Memorial Building, which was started in September 1948, is fast nearing completion, and it is expected that in the very near future Bell Island ex-servicemen will have a meeting place and club room facilities which will be second to none in Newfoundland.

The Memorial Building was completed in July 1951, as it was reported in the December 31, 1951, issue of the Daily News, on page 58, that "On July 7th, after months of hard work, the club rooms in the Memorial Building were opened and since that time have been a popular meeting place for ex-servicemen and friends."
The page below is from the Submarine Miner, Jan. 1958, p. 8 regarding the offical opening of the "new annex" to the Canadian Legion on November 11, 1957. 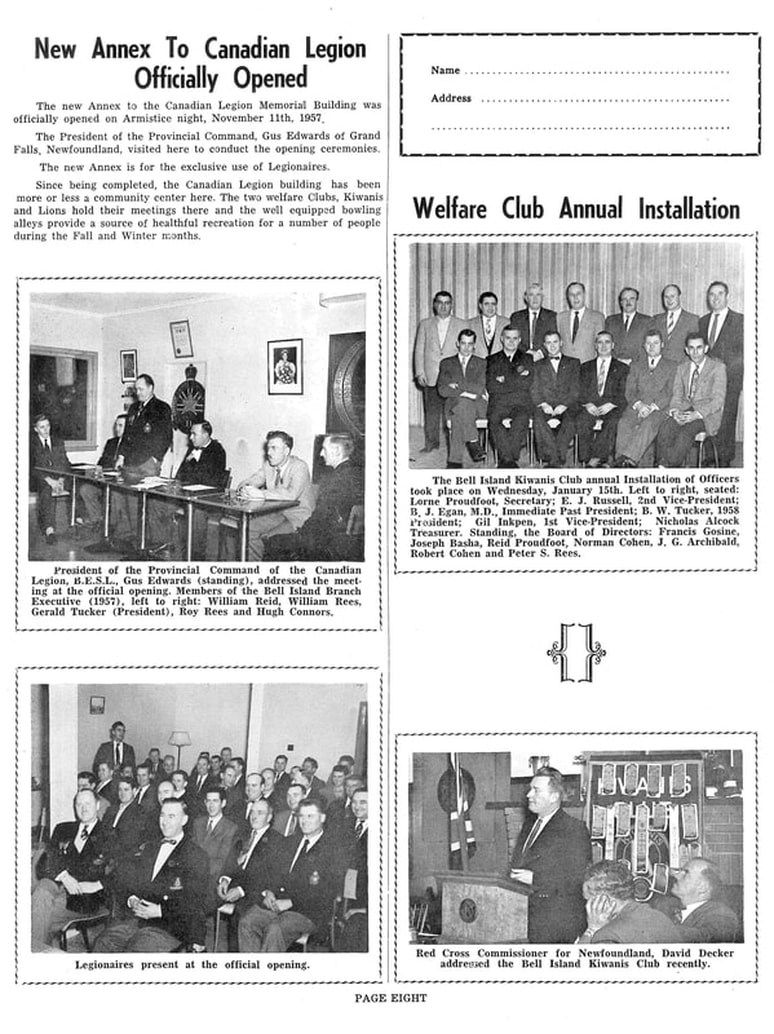 Fire destroyed the Legion building on Saturday, March 8, 1958. The March 12, 1958 Daily News reported on page 7 that, "The Canadian Legion Hall, hub of social activity on Bell Island, was destroyed by fire early Sunday morning. Apart from Legion property, the Kiwanis Club lost all their banners and pennants and other belongings. Some insurance was carried." The photo below is the grainy newspaper photo showing the aftermath of the fire, with just the two chimneys and the concrete foundation remaining. 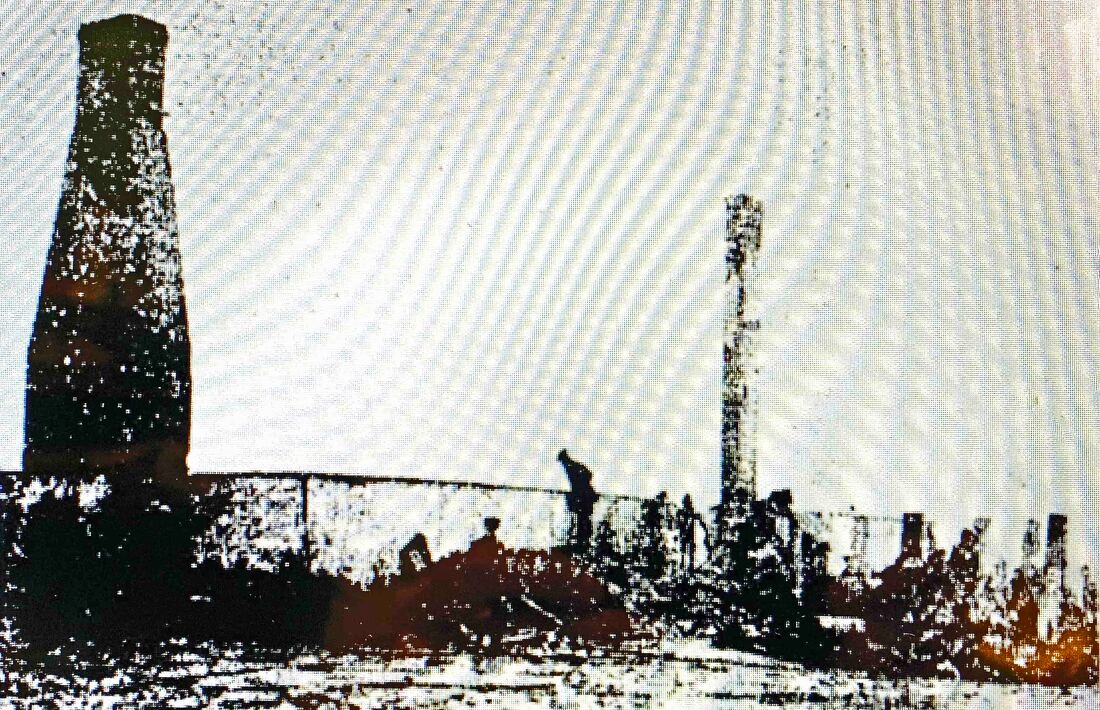 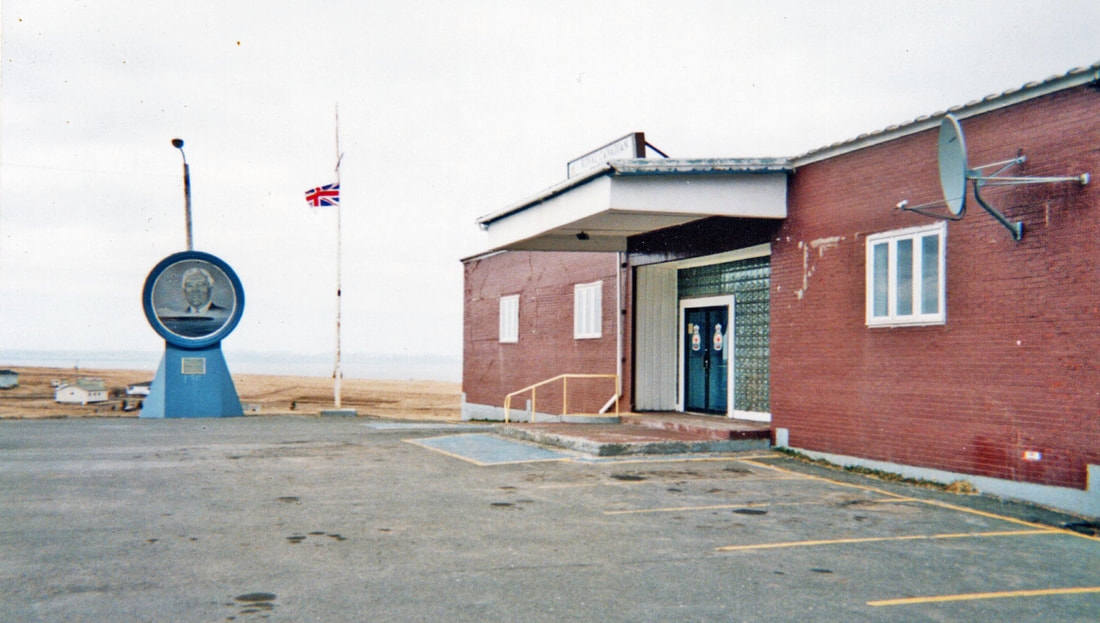