The Wabana Boys’ Club was part of a Canadian movement that started in Saint John, New Brunswick in 1900. The Bell Island club was formed May 4, 1955 at a meeting of mine company officials, union leaders and members of the Kiwanis, Lions and Canadian Legion clubs. The Manager of DOSCO operations on Bell Island, H.P. Dickey, is credited with making the club a reality. Its main goal was to help curb male juvenile delinquency. Not that the original members were delinquents, of course, but the Club was a way of keeping boys occupied so that they did not go down that path. The Baby Bonus was keeping a lot of boys in school, the same as it was doing for the girls. With the modernization of the mines, young boys were no longer needed the way they had been in the past. These were the “baby boom” years, so there were a lot of boys on the streets once school was let out for the day. Without things to keep them busy, they sometimes got up to mischief. At the Club, the boys could play such physical sports as basketball and floor hockey to help release some of their energies. They also played board games, read books and did school assignments. It is interesting to realize that this was an ecumenical club in a community where sports and other activities for children were normally run along denominational lines.

By 1960, there were 571 (all-boy) members. In 1961, a half dozen or so girls in Grade 8 at St. Augustine's School wrote a letter to the Kiwanis Club (which was the community organization overseeing its operation) "demanding" that girls be allowed to join the Boys' Club. The day following the weekly Kiwanis meeting, the girls were called to the office of Principal Lester Clarke and given a mild lecture in which he reminded them that they had their own girls' organizations, such as the church-affiliated Girls' Auxiliary. This totally missed their point that the Boys' Club had a physical presence in the community and had year-round daily activities, whereas they had only once-a-week evening meetings during the school year of the girls' groups in which they were involved. Their demand fell on deaf ears though, as it was pointed out to them that none of the other Boys' Clubs in Canada accepted girls.

Girls were not perceived to be a problem as far as delinquency went, so this young group of budding feminists were not taken seriously and there was no special effort made to organize extra activities for them other than the church and school groups they already attended. It is only since the Women’s Movement of the 1970s that men and women have welcomed each other into their clubs. Before that, most seemed to accept the fact that males had their exclusive clubs and females had theirs. In 1974, Boys' Clubs of Canada became Boys' and Girls' Clubs of Canada, and girls soon became a bit part of the Wabana Boys' and Girls' Club.

​(Sources: Submarine Miner, V. 2, No. 6, June 1955, p. 7, and V. 3, No. 12, Dec. 1956, p. 5; Ruth Archibald, email, June 16, 2018.)
​
The formation of the original Wabana Boys' Club was spear-headed by Herbert P. Dickey, Resident Manager of Dominion Wabana Ore Limited on Bell Island. The first meeting to discuss the proposed Club took place in the mining company's Main Office on Saturday afternoon, November 20, 1954. The summary below of that meeting was published on page 8 of the December 1954 issue of the Company's magazine, the Submarine Miner​:
Below is page 6 of the July 1955 issue of the Submarine Miner. Almost the entire page is devoted to Boys' Club news. Ernest Cotton had been hired as Director of the Club and gives his first report of Club activities here. From the Report of Activities on the right, it seems that the Club opened its doors on June 27, 1955, shortly after schools closed for the summer break. From this point on, every issue of the Submarine Miner featured photos and stories of activities at the Club, so much so that, when the magazine was in its final months of publication in 1959, quite a lot of its content concerned club activities. You can read what was in the Submarine Miner​ by clicking on "Publications" in the top menu above. Click on "Submarine Miner" in the drop-down menu to choose issues. 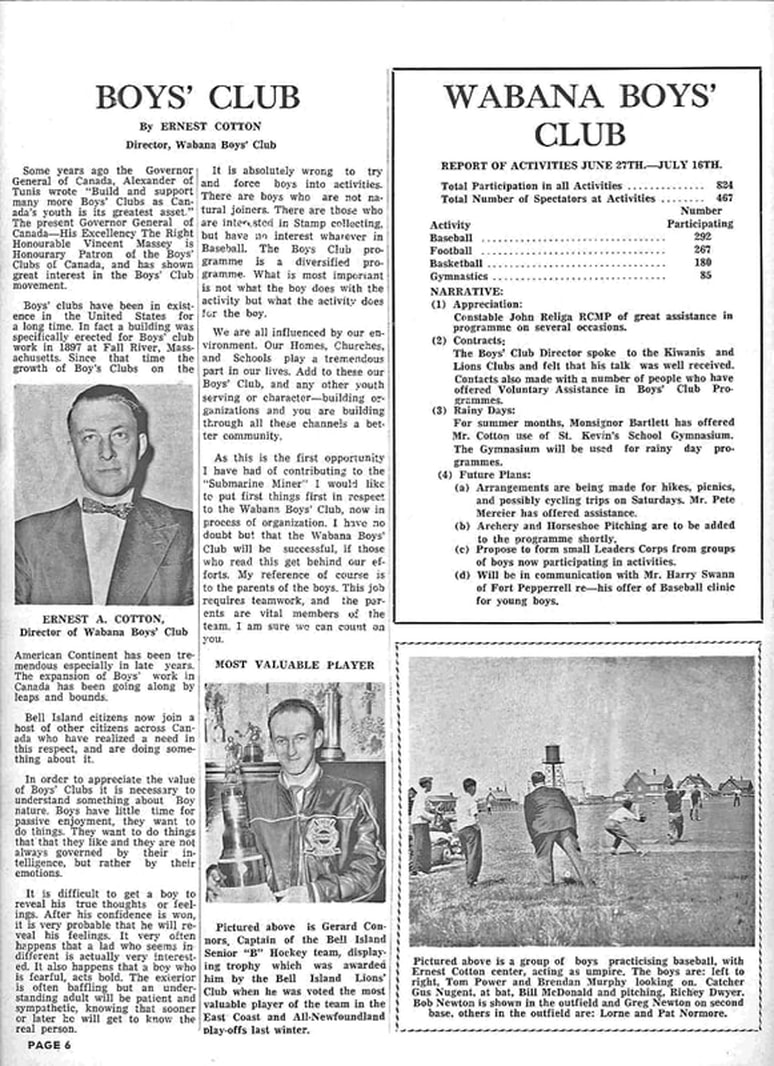 Earnest A. Cotton was born in Nipper's Harbour, NL, in 1916, to Georgina and Frank D. Cotton (c.1885-1969), a Methodist minister. He lived in half a dozen Newfoundland communities before moving to St. John's in 1937 to attend Prince of Wales College and Memorial College. In 1939, he moved to New Brunswick to attend Mount Allison University to study for the United Church Ministry. He met his future wife, Helen Aiton, there. On graduating from university, he became a war services supervisor with the YMCA, working in Halifax, St. John, NB, and St. John's, NL. At the end of the war, he became Director of St. Andrews Youth Centre in Montreal. From there, he became the Executive Director of the Wabana Boys' Club at its inception in June 1955. He remained in this position until 1962, at which time he became Director of the Moncton, NB, Boys' Club. He became the Atlantic Regional Director of Boys' and Girls' Clubs of Canada in 1966, with 8 clubs in that region. (To  reflect the growing number of girls participating in Club programs, the name was officially changed to include girls in 1974.) When he retired in 1981, there were 28 clubs. In retirement, he volunteered his time to visit the sick in Toronto's Sunnybrook Hospital, counseled youth at the York Detention Centre, worked with first-year medical students at the University of Toronto, volunteered with Travelers Aid, and worked with the executive of the Association for Jewish Seniors. He died in Toronto on June 29, 2004.
​Below is the Year-End Review of the first year of Boys' Club activities on Bell Island (from the December 1955 issue of the Submarine Miner​, page 6). It fills in information about where activities took place during this first year when the Boys' Club building, the former DOSCO Electric Shop, was being renovated to accommodate the Club. Several schools, the CLB Armoury and the Canadian Legion Bowling Alleys were opened up for the boys during this time. The Boys' Club was officially approved for membership in the National Organization of Boys' Clubs of Canada in October 1955.

The photo below is from the October 1955 issue of the ​Submarine Miner. 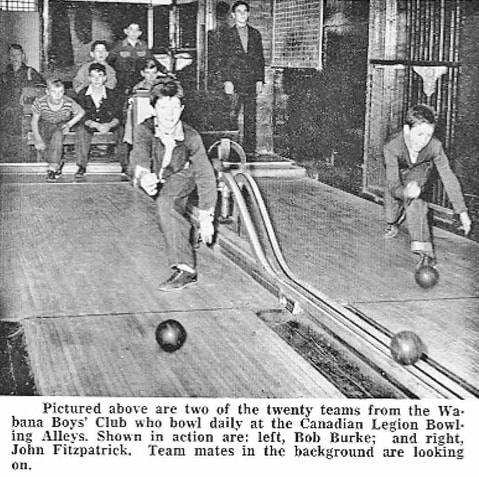 ​Below is the report of the First Annual Meeting of the Wabana Boys' Club from the February 1956 issue of the Submarine Miner​, pages 4-5. 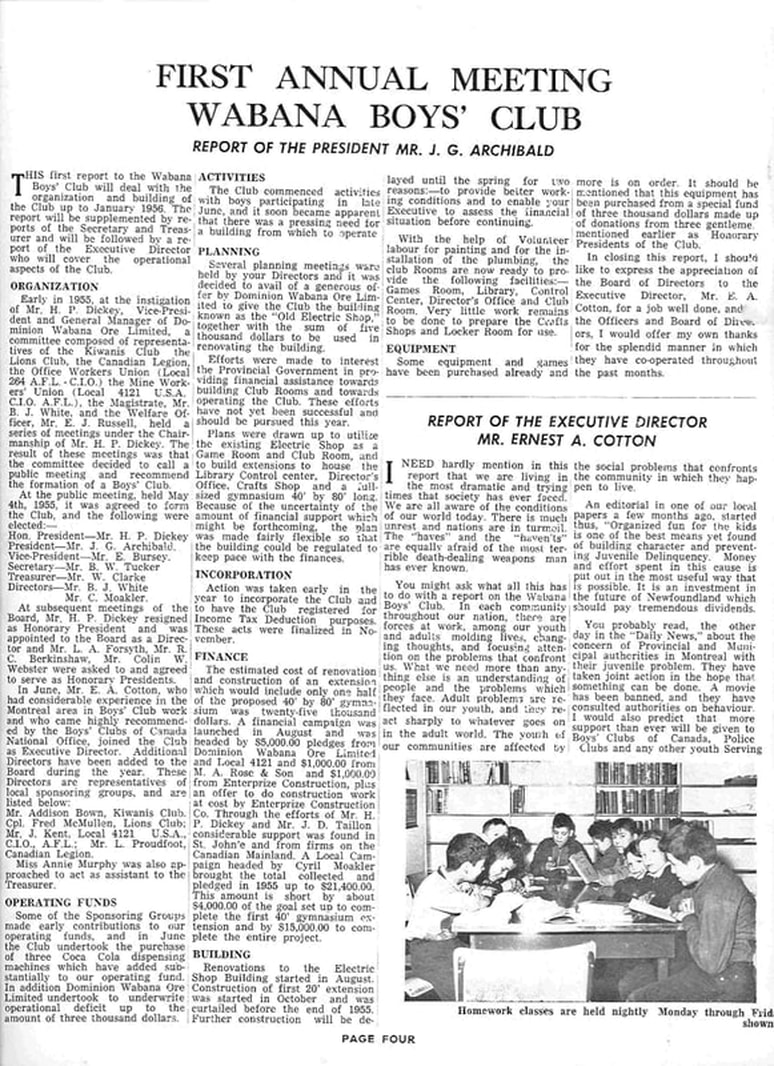 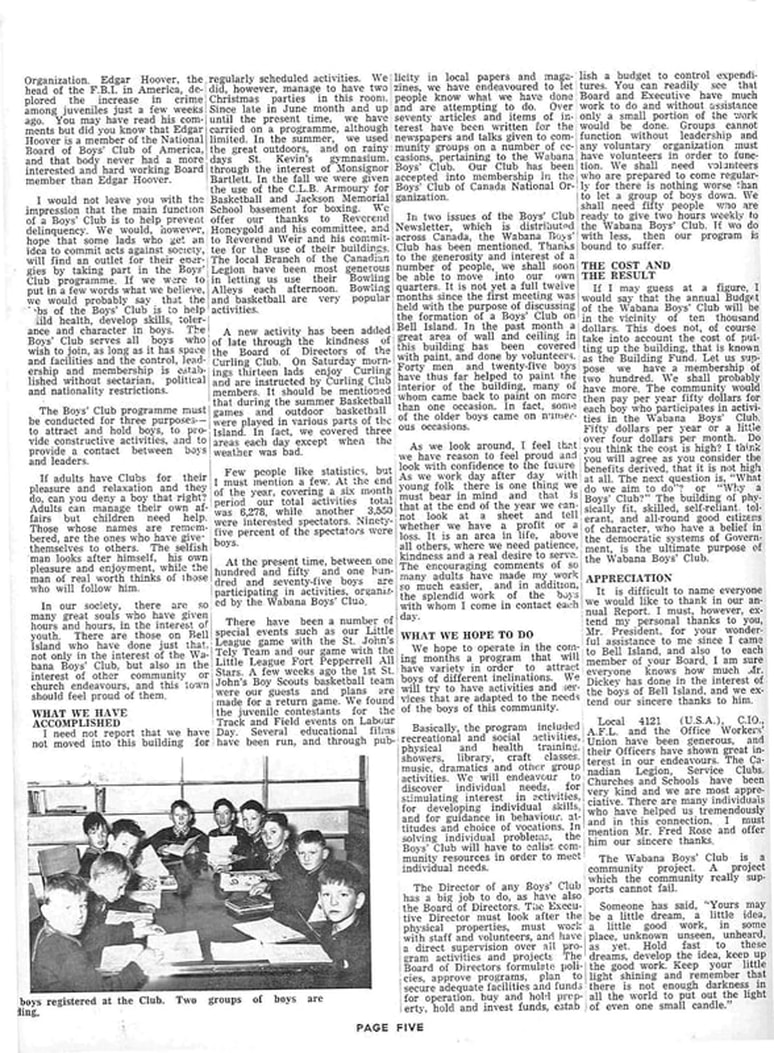 The next 2 images are of the Programme for the official opening of the Wabana Boys' Club, November 17th 1956. Photos are courtesy of Bernie Johnson. 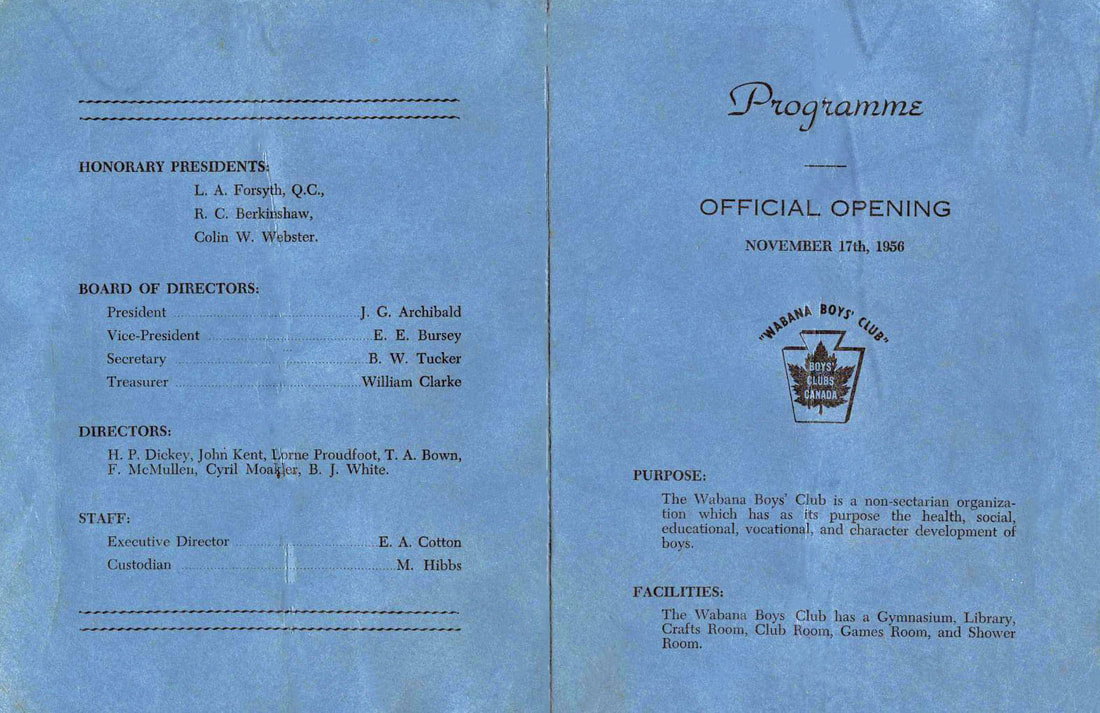 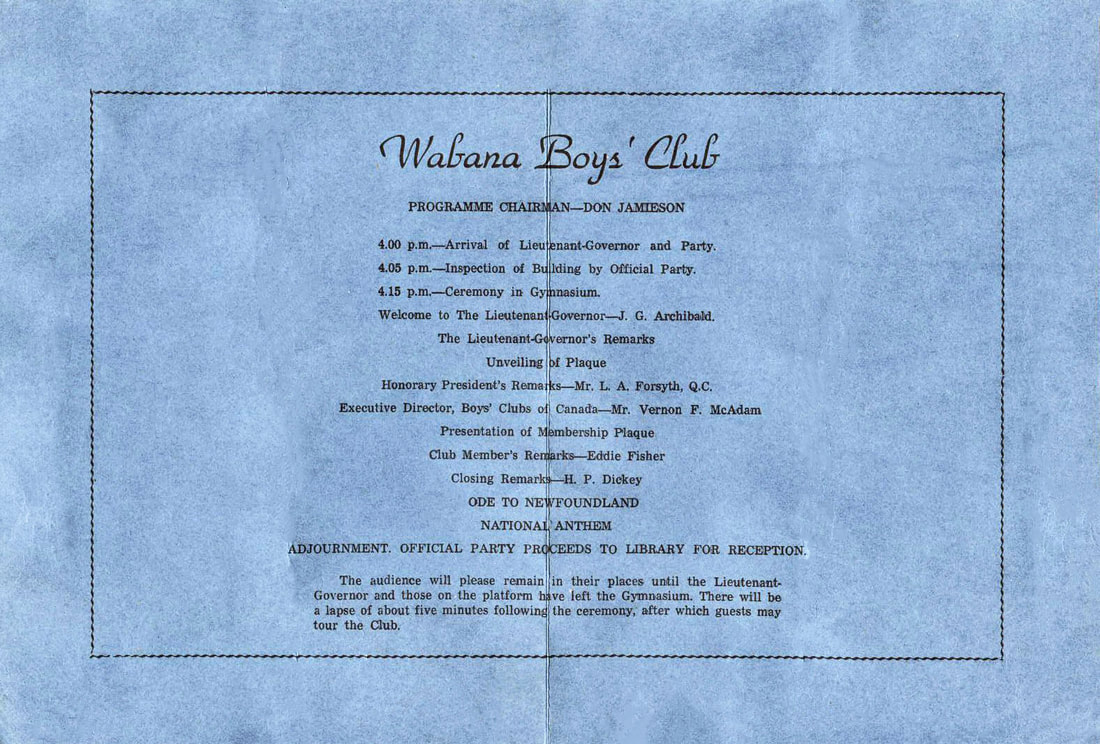 ​Below is the report of the official opening of the Wabana Boys' Club from the December 1956 issue of the Submarine Miner​, page 5. 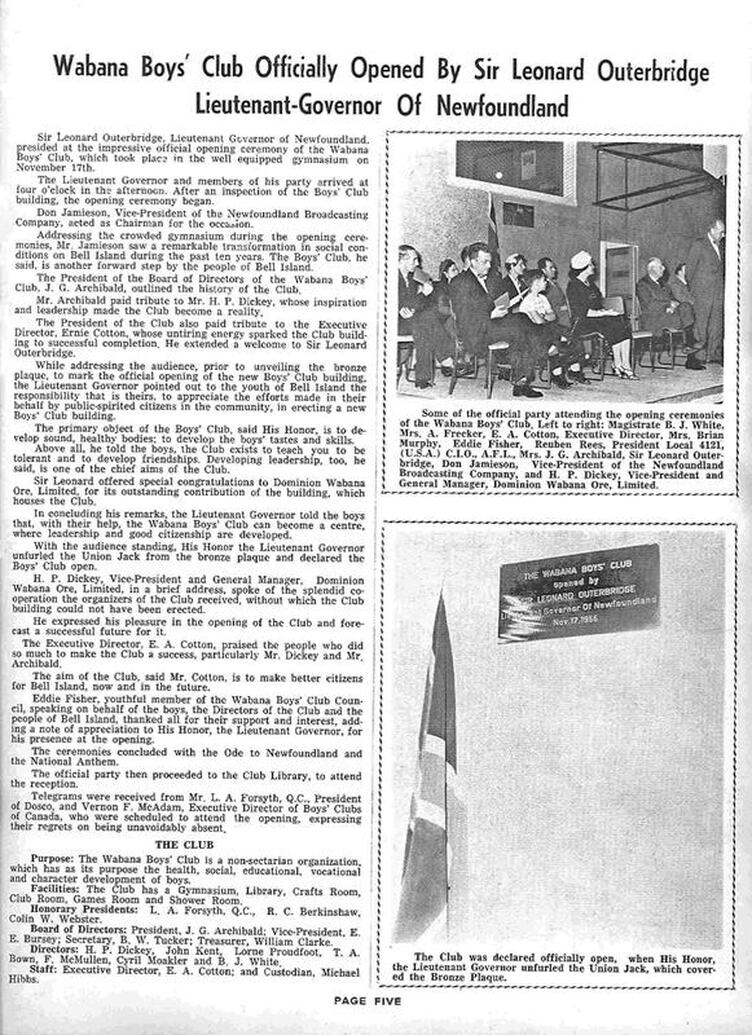 This page below from the February 1959 issue of the Submarine Miner​, page 6, shows some of the activities and events of the Boys' Club. The announcement was also made of the appointment of Jim Hearn as Assistant to the Director, E.A. Cotton. Jim would go on to become a long-running Director of the Club.

The Wabana Boys' Club report below, from the April 1959 issue of the Submarine Miner, page 6, describes a typical day of activities at the Club and praises the contributions of the Club's volunteers. 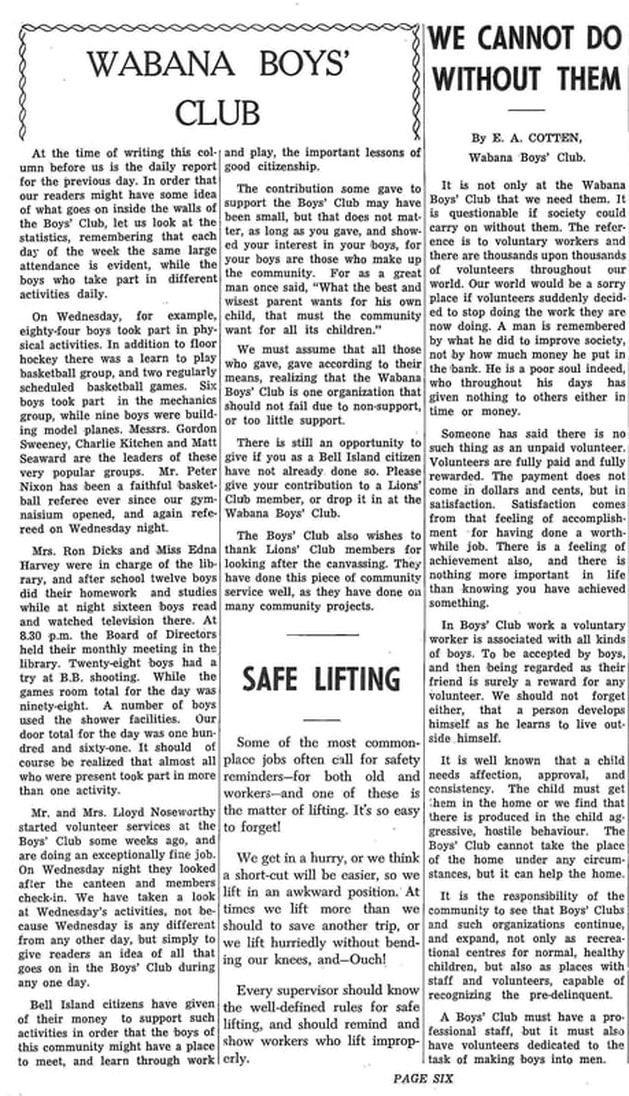 To read more stories and see more photos of the Wabana Boys' Club up to August 1959, see the issues of the Submarine Miner and also DOSCO World on this website under "Publications" in the top menu.