PHOTO GALLERY
BUILT HERITAGE
MINE COMPANY BUILDINGS
The first five buildings on this page are the only non-residential mining company buildings still standing on Bell Island in 2021.
The Survey (Surveyors') Office. c.1900-c.1950
Town of Wabana Town Hall, c.1950-c.1990s
The Red Building, 2016-
Subject: Survey Office, c.1900-c.1950; Town of Wabana Town Hall, c.1950-c.1990s; The Red Building, 2016-
Location: Northeast side of No. 2 Road where it meets Town Square.
Construction material: Wood with brick "vault."
Date of Construction: c.1900
Dates of operation: c.1900 to present.
Date of Destruction: Still standing in 2021.
​History:
It is unclear if the Survey Office was built by the Scotia Company, in which case it was most likely built in the latter half of the 1890s. If it was built by the Dominion Company, it was probably built c.1900. It has had some exterior renovations over the years but retains most of its original features. For about 50 years, it served as the mining company’s Survey Office. When it was no longer needed by DOSCO, it became the Wabana Town Hall until the Town Council moved to the former Vocational School in the early 1990s. Since then, it has been used by community groups for various functions. In 2006, sculptor Brian Burke created the mural "Youth at Work" on the west side of the building. In 2016, the volunteer group "Tourism Bell Island Inc." renamed it “The Red Building” and renovated it to serve as a tourism centre and for community events for groups, organizations and individuals.
The photo below is of Town Square on January 15, 1937, the day after fire destroyed 20 shops and homes. The building on the left is the former DOSCO Company Survey Office, now called "The Red Building." Just right of center is the former Company Surgery. Right of that is the former William Somerton house, which is still standing. Scroll to the bottom of this page to see a closer view of these Company buildings. Photo courtesy of A&SC, MUN Library, COLL-202. 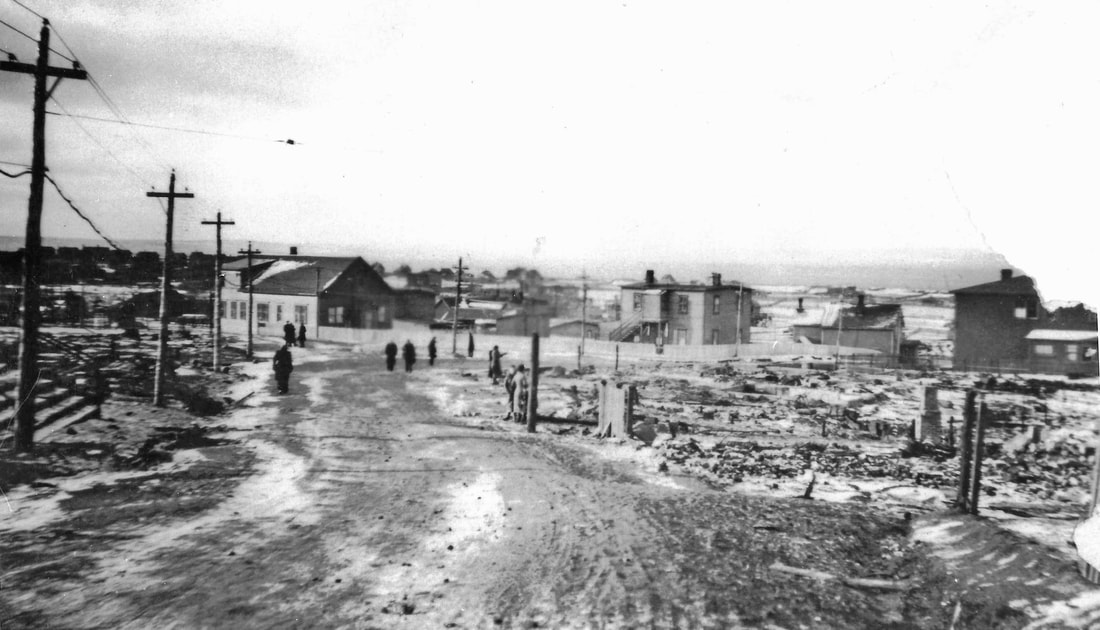 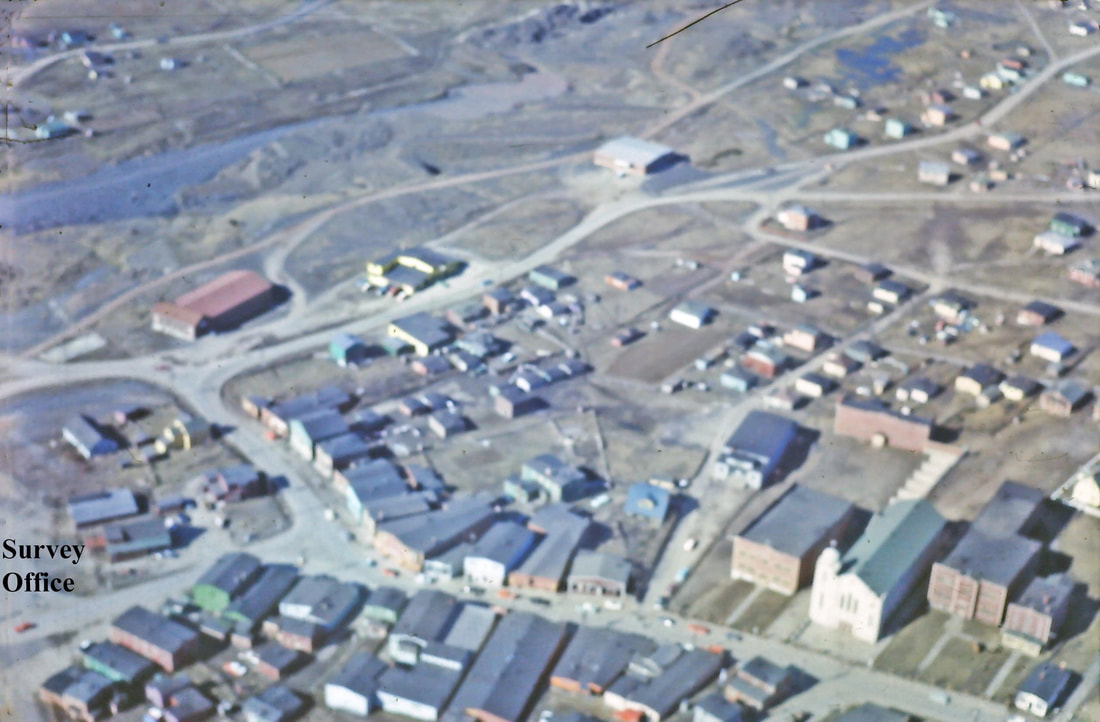 In the diagram below, you can see the location of the Mine Survey Office, now called "The Red Building," at the east end of No. 2 Road. The "Hospital" just east of it was the Company Surgery, which was the Island's "Emergency Room" in the days before the Bell Island Hospital was opened in 1965. If you broke a bone, or had a cut, sharp pain or whatever, you went there to get it fixed up or checked out. If it was serious enough, they would arrange to get you to the General Hospital in St. John's. Otherwise, they did what they could and sent you home. On the west side of the Survey Office is a jut labelled "Vault." This is constructed of brick and was used to store DOSCO's records. In 2006, sculptor Brian Burke carved a mural entitled "Youth at Work" in the brick. It depicts some of the jobs done by young boys who worked for the mining company. (See next photo below diagram.) Source: "Insurance Plan of Wabana 1954." 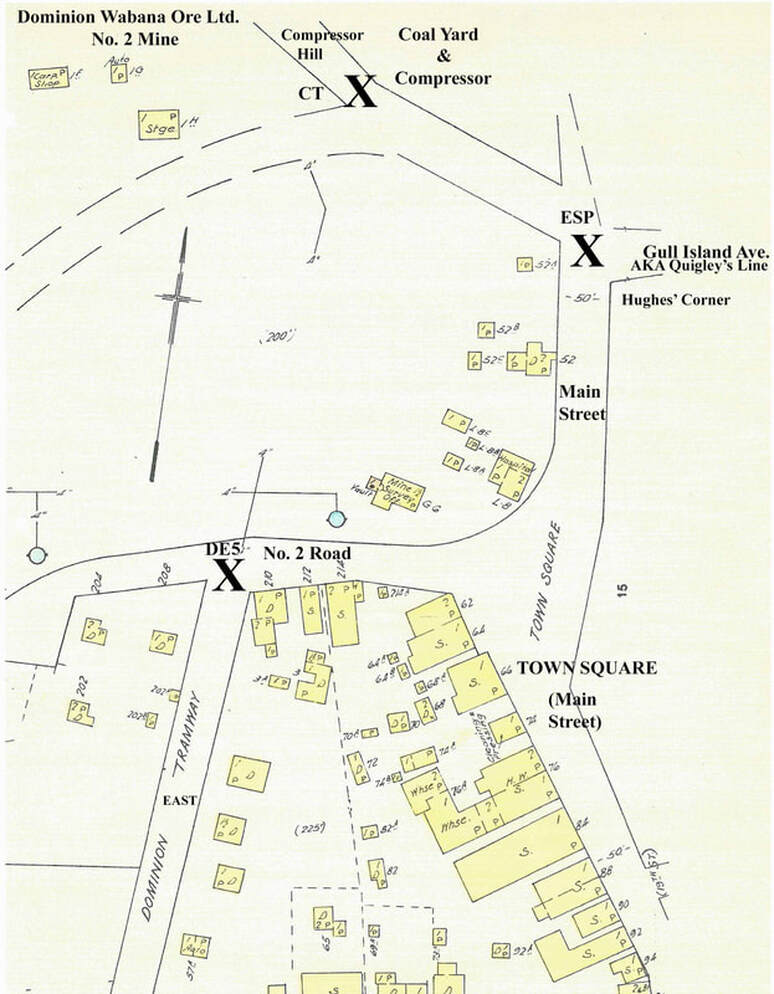 Below is sculptor Brian Burke standing next to his mural "Youth at Work" at the unveiling on June 25, 2006. Photo by Harvey Weir. 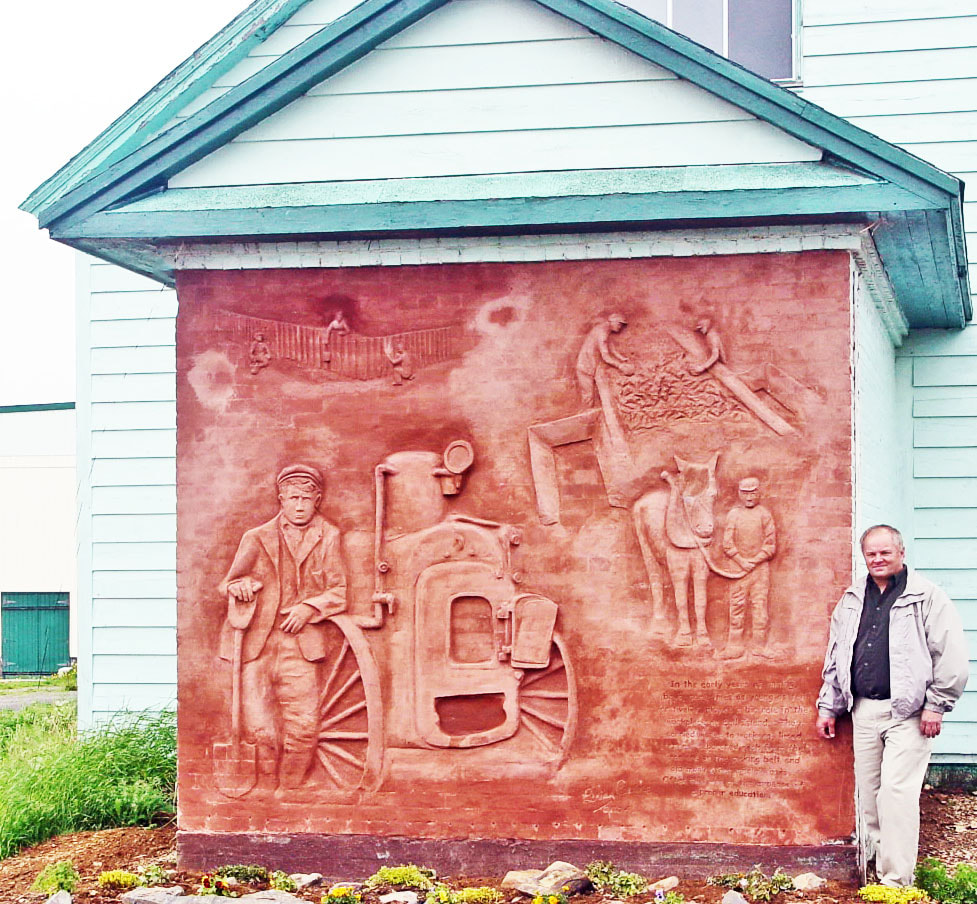 The c. 1950 photo below shows the west side of the Survey Office with a group standing beside an old ore car where the Dominion East Track used to run past to No. 2 Mine. The Company Surgery can be seen in the left background, and Nathan Cohen's Store on Town Square in the right background. Photo posted by Maria Delaney. 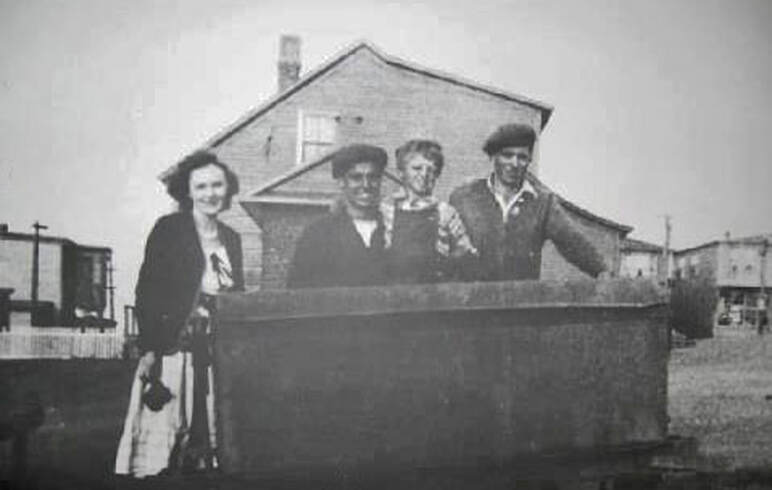 In the c.1970s photo below, the Survey Office is the yellow building in the center of the picture. Photo posted by Ann Jackman. 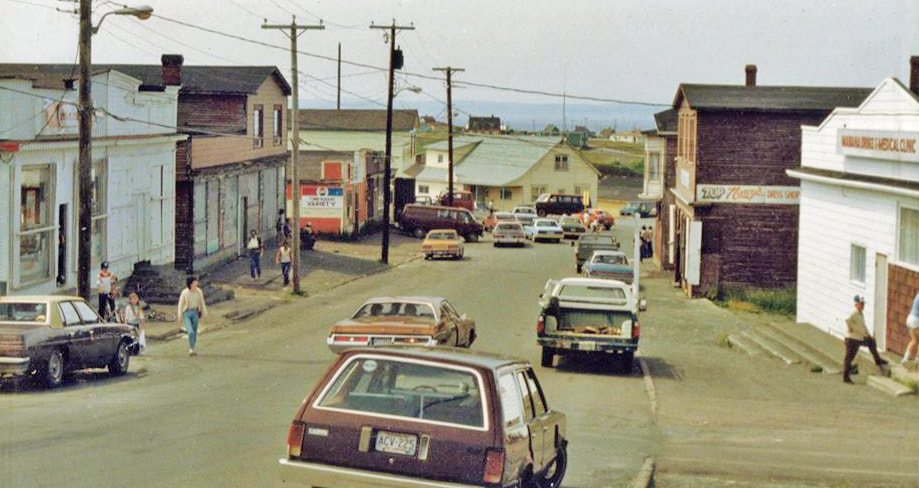 * * *
No. 3 Hoist House, c.1910-1966
​Town of Wabana, 1966-present
Subject: No. 3 Hoist House, c.1910-1966; Town of Wabana, 1966-present.
Location: North side of 3rd Street and west side of Davidson Avenue.
Construction material: Red brick.
Date of Construction: c.1910.
Dates of operation: c.1910-present.
Date of Destruction: Still standing in 2021.
​History:
The No. 3 Hoist House was built about 1910 by the Scotia Company. William Lindsay Sr. (1883-1971) was a Mechanical Engineer who worked for Fraser & Chalmers of Erith, England when he came to Bell Island in 1910 to supervise the installation of the No. 3 Hoist machinery made by his company. He was offered a position by the Scotia Company and spent the remainder of his working life on Bell Island, where he was Superintendent of Compressors, Crushers & Hoists. Since the closing of the mines in 1966, the building has been used by the Town of Wabana to store road salt.

In the photo below, the No. 3 Hoist House is viewed from the southwest, 2005, by Gail Hussey-Weir.

In the diagram below of the southern end of No. 3 Mine Yard, the Hoist House is situated in the center at the very bottom, just east of the Arena. Source: "Insurance Plan of Wabana 1954." 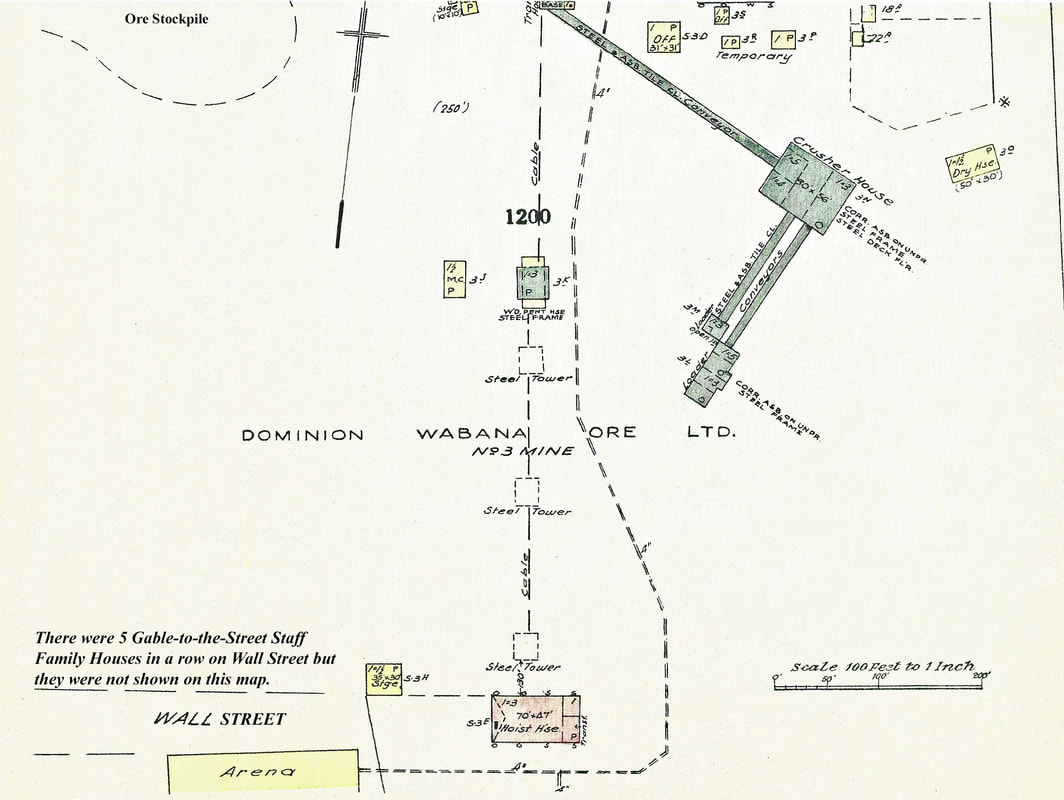 The photo below is of a mural on the east wall of No. 3 Hoist house entitled “No. 3 Main Gate Area.”  Measuring approximately 42’ wide x 13’ high, it was painted by artists Gordon Johnson and Wayne Cole and unveiled December 24, 1991.

* * *
DOSCO Electric Shop, pre-1929 - 1955
Bell Island Boys' & Girls' Club, May 1955 - present
​Subject: Electric Shop, pre-1929 - 1955; Bell Island Boys' & Girls' Club, May 1955 - present.
Location: North side of Gull Island Avenue where it meets Town Square.
Construction material: Red brick. The sections added for the Boys' & Girls' Club are wooden.
Date of Construction: pre-1929.
Dates of operation: pre-1929 - present.
Date of Destruction: Still standing in 2021.
​History:
No date has been pinpointed for the construction of the Electric Shop, but a c.1929 photo below shows what looks like the roof of the building in the upper right corner. (The smoke stacks in the photo blew down in 1932.) This photo was taken from Bennett Street looking northeast over the East Tramway and the backs of the businesses at the east end of No. 2 Road. 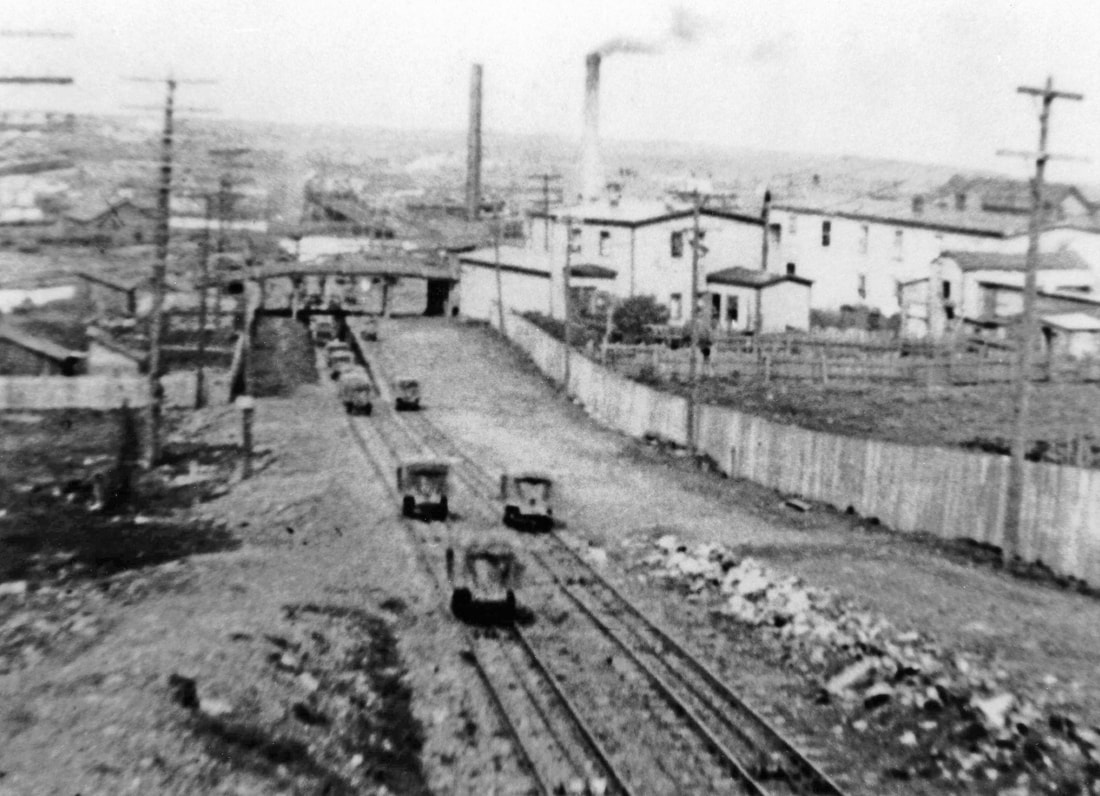 The red brick part of the building in the photo below is the original DOSCO Electric Shop. The new section on the right was added in 1955 when the building was turned into the Wabana Boys' Club. Source: Submarine Miner​, January 1956, p. 6. 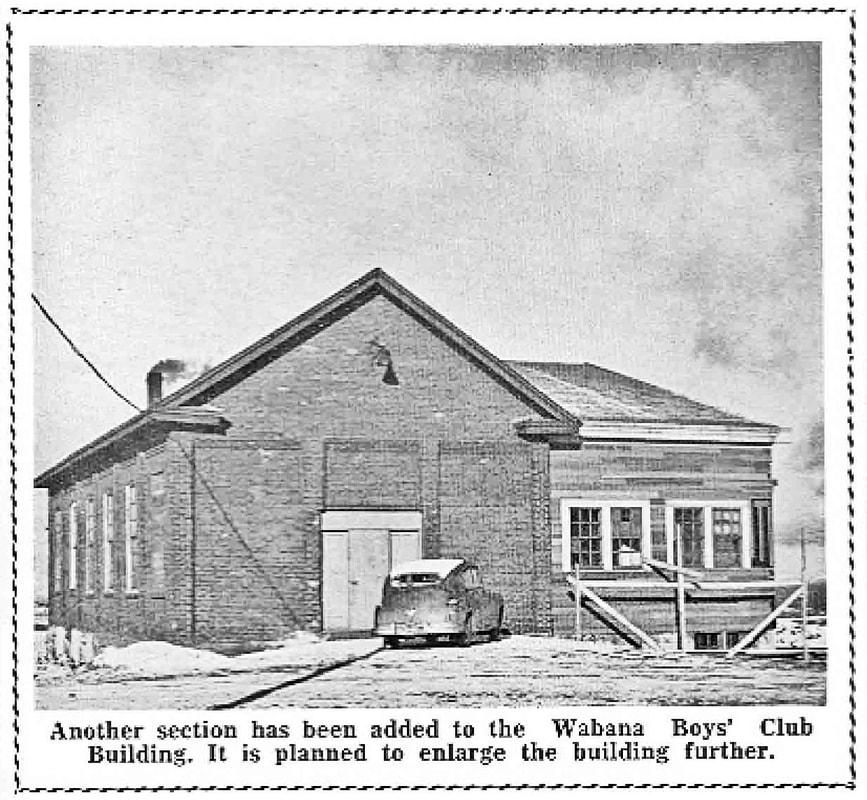 In the early 1960s aerial view of Town Square below, the Boys' Club with the former Electric Shop at its west end is the large red-roofed building on the left. Photo from the Southey Collection, courtesy of A&SC, MUN Library. 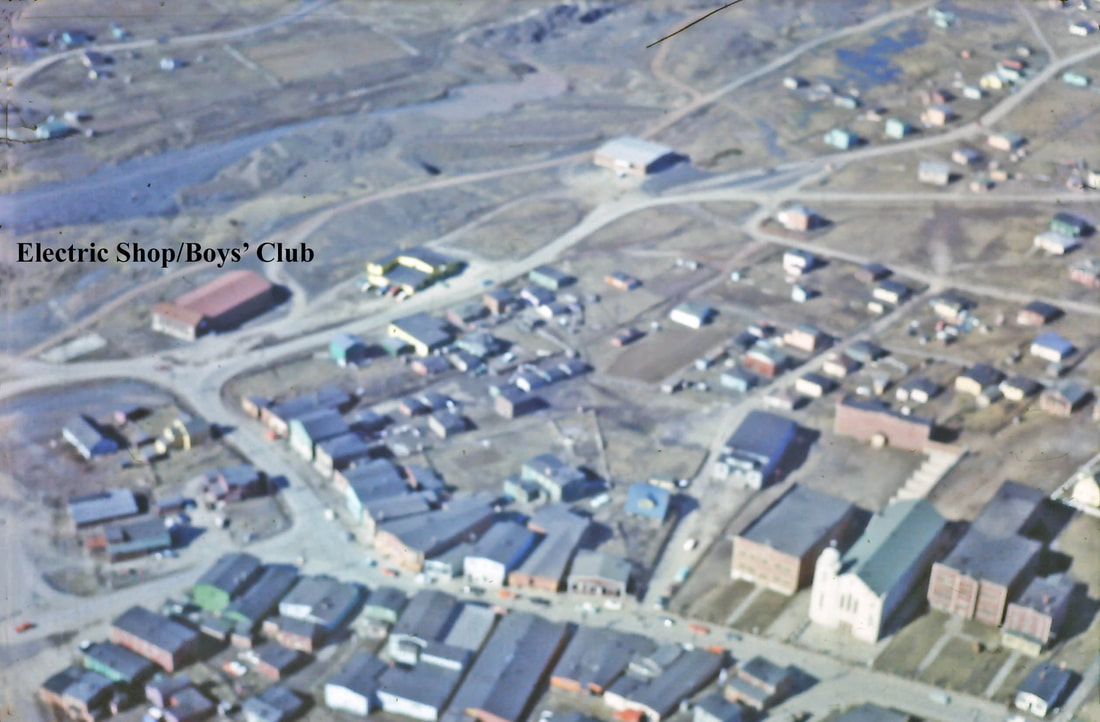 * * *
No. 2 Hoist House, c.1902-1950
Curling Club, 1955-
​​Subject: No. 2 Hoist House, c.1902-1950; Curling Club, 1955-
Location: West side of Petrie's Hill near No. 2 Road.
Construction material: Red brick.
Date of Construction: c.1902.
Dates of operation: c.1902-January 1950; 1955-present.
Date of Destruction: Still standing in 2021.
​History: Hoist House for Dominion Company's No. 2 Mine, which went underground c.1902 and then went submarine. No. 2 Mine was closed down in January 1950. In the Fall of 1954, a 150-foot long by 36-foot wide addition was constructed on the north side of the Hoist House to accommodate two sheets of ice for curling. The Hoist House itself was renovated to provide club house facilities and to house the ice-making machinery. The Hoist House today houses a bar, still called the "Curling Club," and the Bell Island Sports Hall of Fame is located in the former curling rink.
The No. 2 Hoist House was located near the bottom west side of Petrie's Hill, near the center of the map below. Source: Insurance Map of Wabana, 1954. 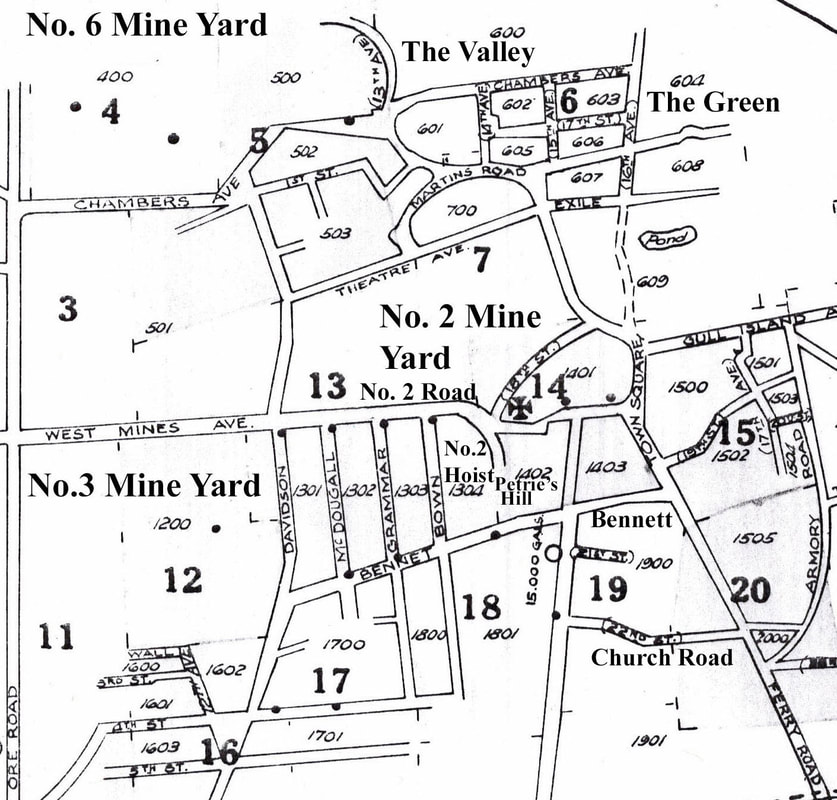 Photo below from the October 1954 issue of the Submarine Miner, p. 6 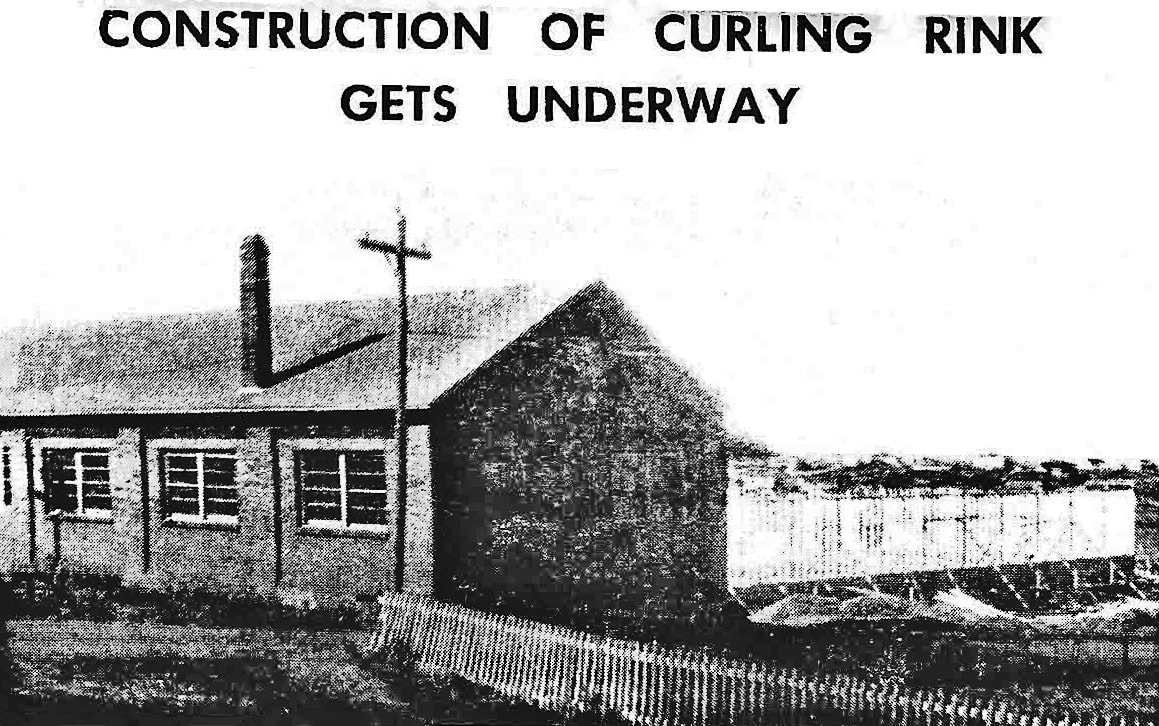 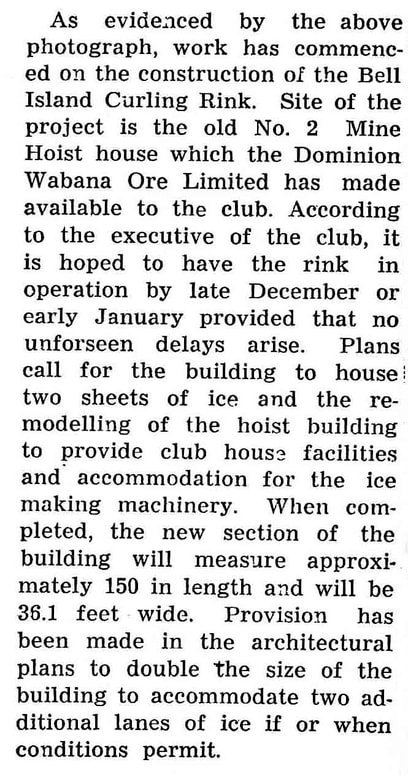 The photo below, taken from The Green looking southeast, shows No. 2 Mine Deckhead in the left half. Just west of the deckhead are two small DOSCO buildings, the smaller one is the firemen's club house and the larger one is the fire hall. The longer building west of that is the No. 2 Hoist House, c.1940. Photo courtesy of Terry Dyer.

The long beige-coloured building in the photo below is the Curling Club c.2019. The part on the left with the gable to the street is what was the No. 2 Hoist House. Photo courtesy of Vince Dwyer. 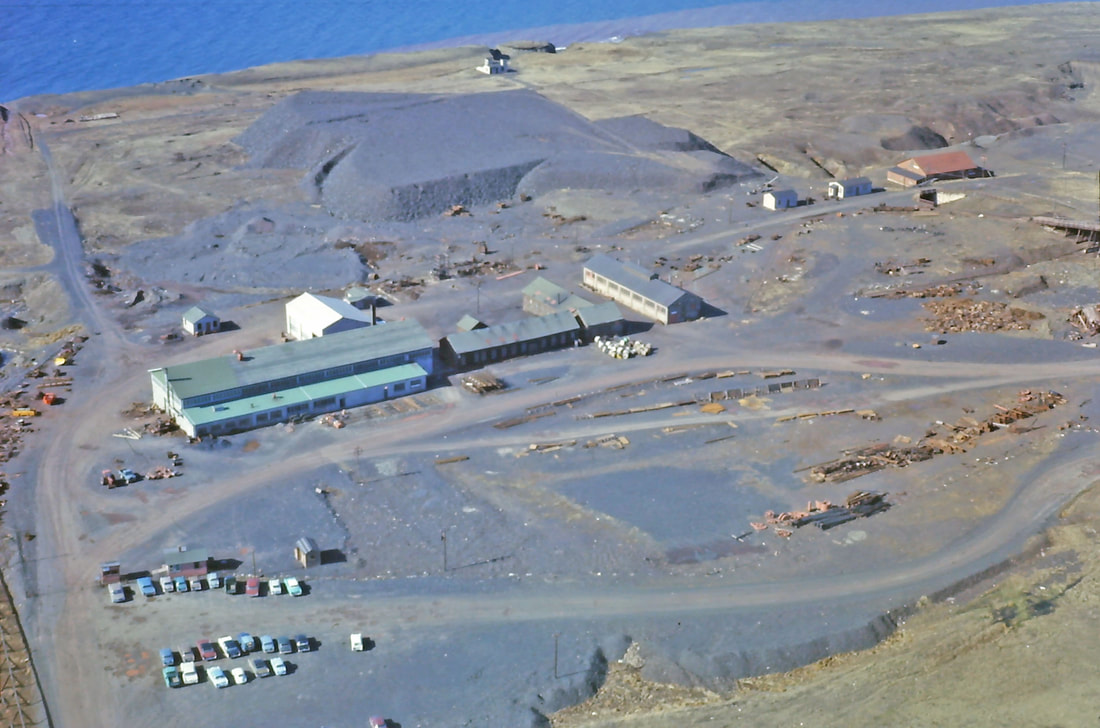 The photo below shows two Euclid Trucks parked behind the Machine Shop pictured above. The east end of the Machine Shop can be seen in this photo, suggesting that the garage was not built until sometime after 1950 when the trucks replaced the ore cars for transporting ore from the mines to the Scotia Pier. Chances are, the garage was built to service the Euclid truck fleet. Source: A&SC, MUN Library, Carew Coll-012. 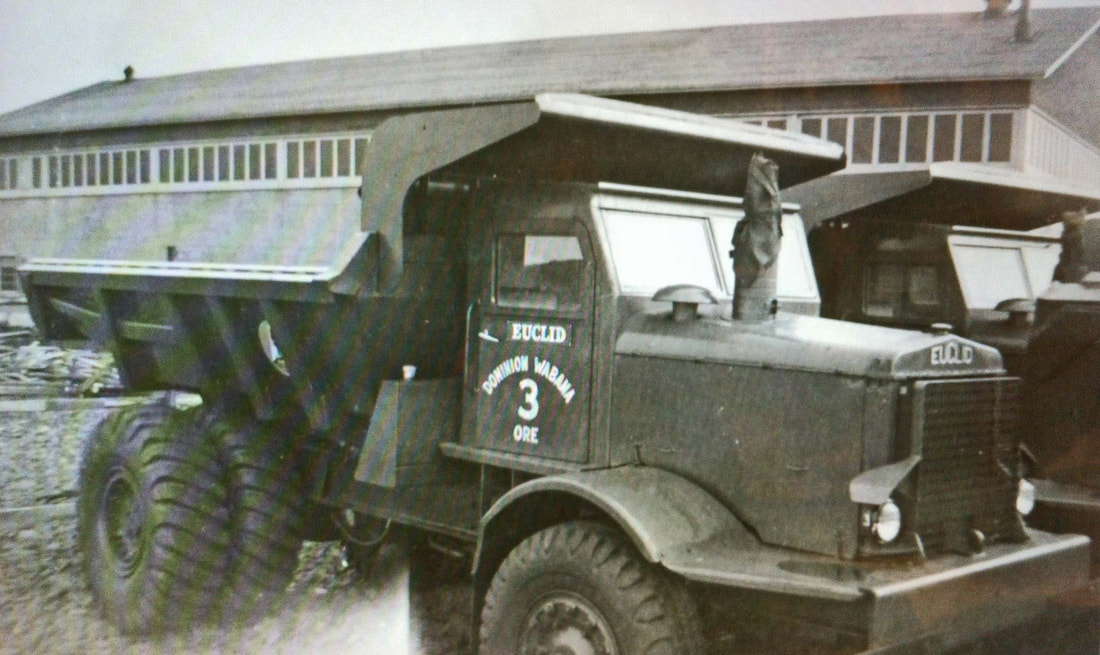 The photo below shows Euclid Trucks #10 and #5 at the garage, located behind the Machine Shop in No. 6 Mine Yard. Photo courtesy of Kirk Gosse. 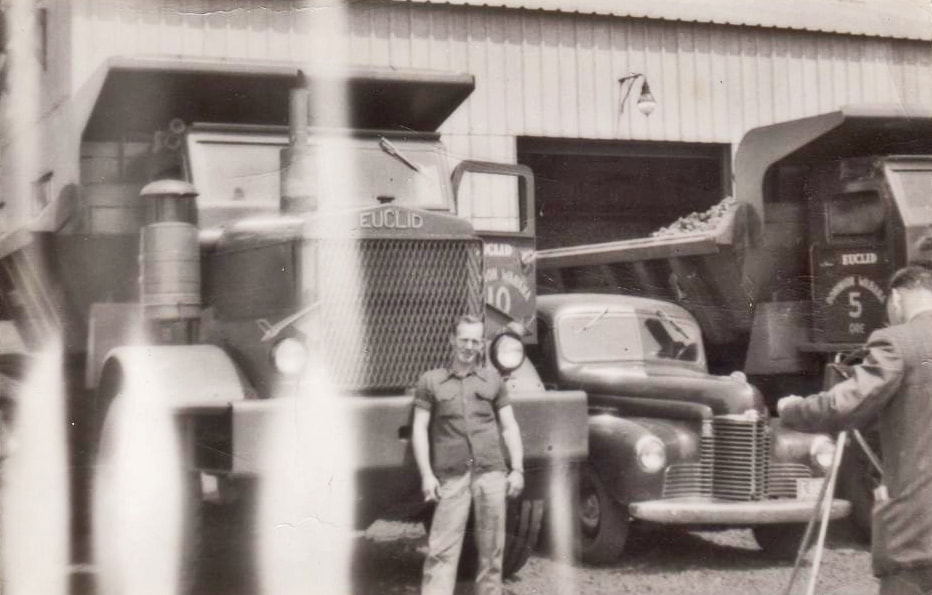 The photo below shows the garage as it looked in 2012. Photo by Gail Hussey-Weir. 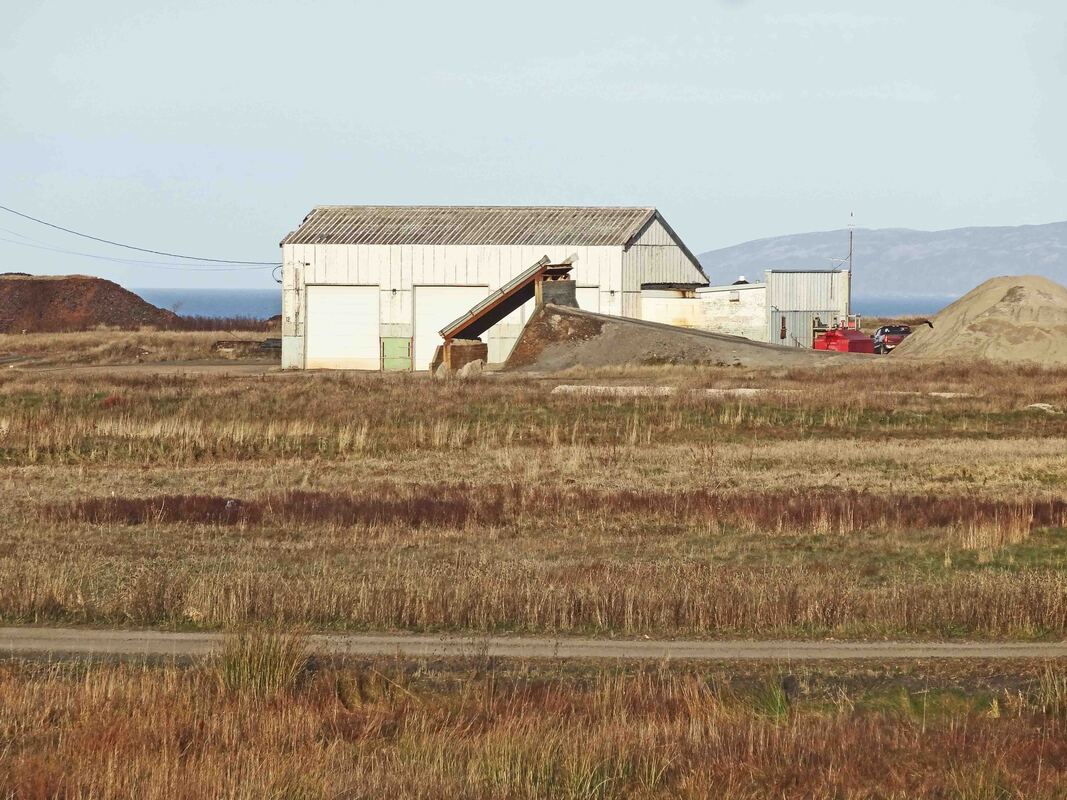 * * *
Dominion Company (DISCO) Main Office, c.1900-1922
Warehouse for electrical equipment and records storage, 1922-April 2, 1954
Subject: Dominion Company Main Office, c.1900-1922; Warehouse & Record Office, 1922-1954.
Location: Corner of No. 2 Road and Town Square.
Construction material: Wooden.
Date of Construction: c.1900.
Dates of operation: c.1900-1954
Date of Destruction: Destroyed by fire, April 2, 1954.
​History:
When the Dominion Iron and Steel Company Ltd. (DISCO) (The Dominion Company) purchased some of the mining rights from the Scotia Company in 1899, they took over the Scotia Company's original pier and accompanying buildings at what came to be known as the Dominion Pier, just west of the Beach. ​Arthur House, who worked with DISCO in those first years, said that one of the buildings they inherited from Scotia was "our office," presumably the original Scotia Company's first office and, thus, the first Main Office. He noted that they soon enlarged that office, but it was not long before they moved their Main Office to the mining district. A newspaper article from April 3, 1954 had the headline, "Fire Destroys Old Landmark at Bell Island: Old Main Office of Dominion Iron and Steel Company Razed":
A fire of unknown origin destroyed the old main office of Dominion Iron and Steel Company at Bell Island last night. The fire alarm was sounded shortly after 11 o'clock and the firemen were quickly on the scene, but the fire had too much headway and the building could not be saved. Hundreds of people were there from all over the Island to watch the very spectacular blaze.
The building, which was one of the oldest on the Island has been used since the merger of the Dominion and Scotia Companies in 1922 to store electrical equipment and part as a record office. Nobody has been working there since the new warehouse was completed some months ago. The good work of the Dominion Fire Brigade kept the fire from spreading and no other damage resulted. But for their good work, the residence of Mr. W.J. Somerton as well as the Company's Surgery and even Town Square section could have been destroyed.
(Source: Either the Daily News or the Evening Telegram​, April 3, 1954)
From the description given in the newspaper item about the former DISCO Main Office fire, I have indicated on the diagram below the building (L-8C), located between the Somerton House and the Company Surgery, that I think was the old DISCO Main Office / Electrical Warehouse. ​Source: "Insurance Plan of Wabana 1954." 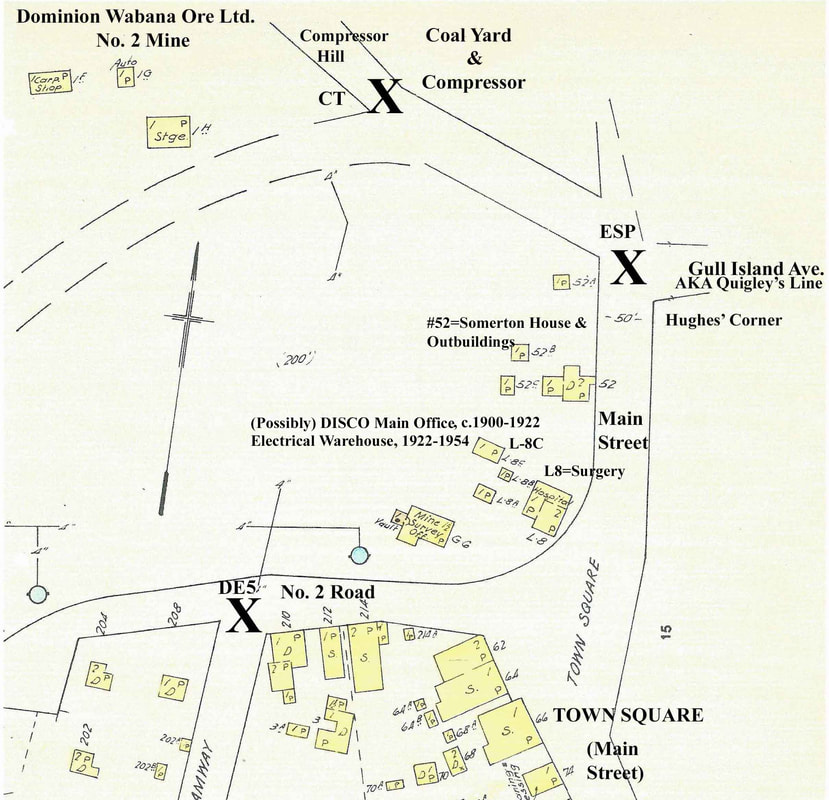 In the photo below of the Company buildings at the North end of Town Square on January 15, 1937, the day after the fire that destroyed 20 shops and homes, you can see the 2 small sheds just west of the Surgery, as indicated in the diagram above. Behind those sheds and partially seen between them and the Survey Office on the left, is the Warehouse that had previously been the DISCO Main Office in the first 2 decades of the century. (The building on the left is the former DOSCO Company Survey Office, now called "The Red Building." Just right of center is the former Company Surgery. Right of that is the former William Somerton house, which is still standing.) Photo courtesy of A&SC, MUN Library, COLL-202.

The photos below are of the Dominion Company's Main Office c.1908-1910. Photos by Wm. B. Ford, courtesy of Brian Rees. 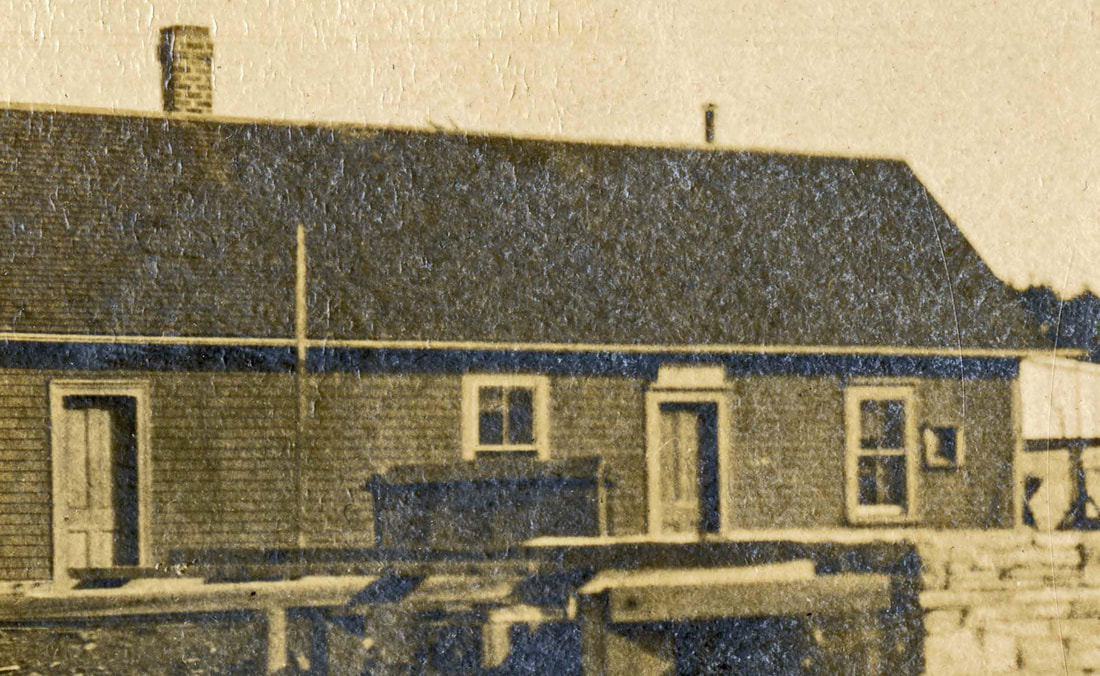 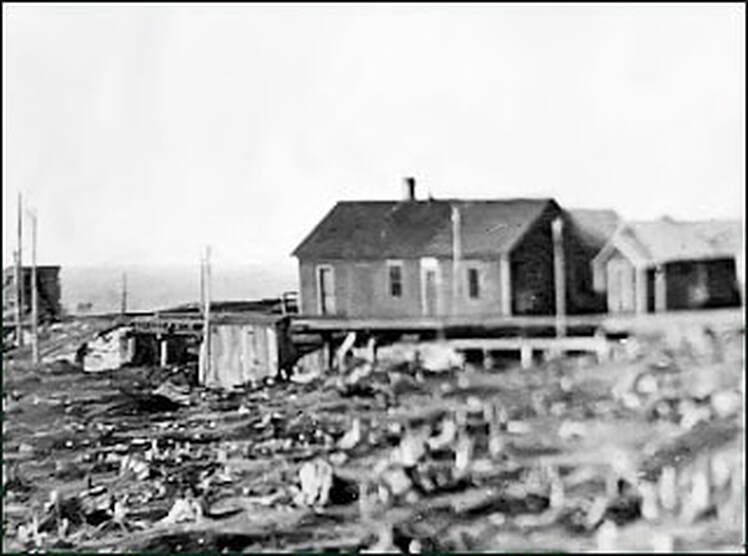