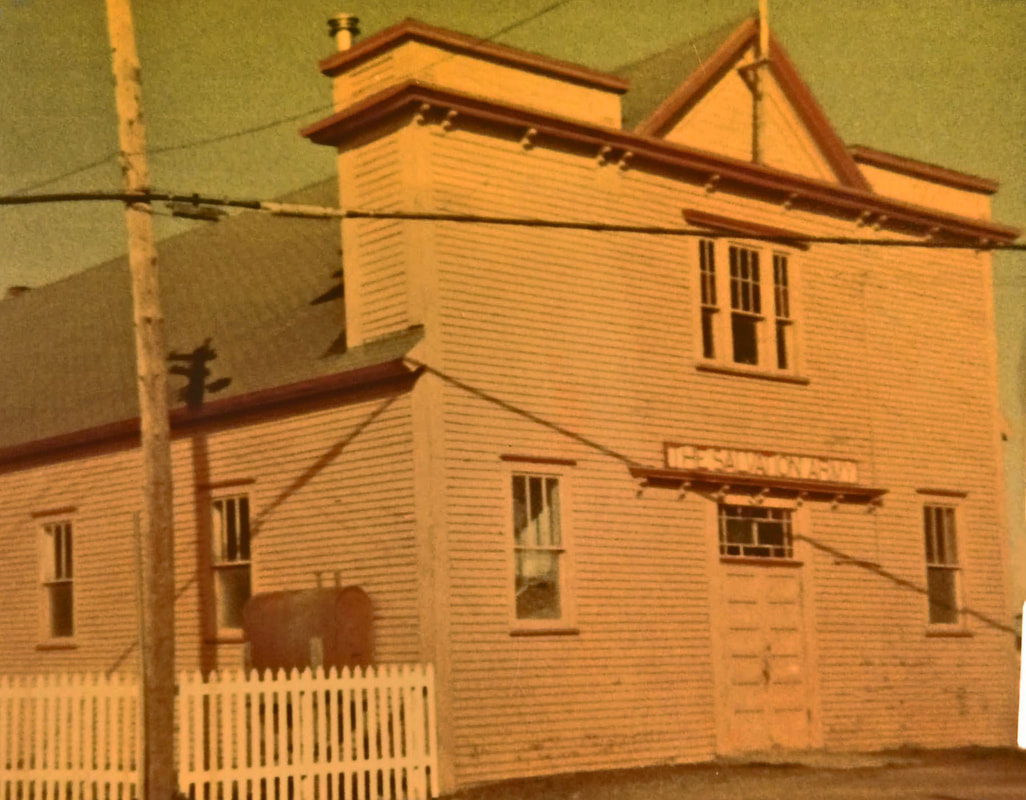 From The War Cry, 23rd Year, No. 47, August 24, 1907, p. 10: "Lieut.-Colonel Rees and Major Morris were recently at Wabana Mines for a week-end, and their meetings were very much appreciated...The Colonel proposed that a new Citadel should be built at this place, and his suggestions were so heartily taken hold of by our Captain and his people, that we are going in for a new building."

From The War Cry, 25th Year, No. 22, February 27, 1909, p. 11: "Lieut.-Colonel Rees at the Mines, Newfoundland. Wabana Mines. We have been refreshed by a visit from our very worthy Leaders, Lieut.-Colonel and Mrs. Rees...Ensign and Mrs. Higdon's baby girl was dedicated. They have been with us a good while, and Ensign is anxious for the spring to come, so that he can begin work on the new Citadel."

On May 15, 1910, the new Salvation Army Citadel on Bell Island was dedicated by Lieutenant-Colonel Rees, who was head of the Salvation Army in Newfoundland.

On June 25, 1911, The L.O.A. paraded to St. Boniface Church in honour of the Coronation of King George V and Queen Mary. The parade lined up 500 strong at the Salvation Army Citadel on Scotia Ridge and paraded to the Front by way of Martin's Road [the Old Front Road, now Nish Jackman Drive].

On September 1, 1914, shortly after the outbreak of the First World War, 25 young men left Bell Island to enlist in St. John's. "They were given a royal send-off by the people of Bell Island. The dusty roads echoed that day to the tramp of marching feet as the CCC and CLB marched in full strength to the Beach accompanied by the Salvation Army Band."

On July 12, 1917, the Happy Home Lodge of the L.O.A. celebrated with a parade from their hall on Main Street to the Salvation Army Citadel on Davidson Avenue by way of Court House Hill. A band from St. John's accompanied the local Salvation Army Band. The service was conducted by Ensign March.

​In the 1921 Census for Newfoundland, 171 people on Bell Island identified their religious affiliation as Salvation Army.

December 2, 1922, Comdt. Hurd of the Salvation Army visited Bell Island raising funds for a private room at the Grace Hospital. Comdt. Strickland ​was in charge of the local Corps at that time.

On July 12, 1928, the Orange Societies paraded to the Salvation Army Citadel. The address was delivered by Comdt. Ebsary.

From the Newfoundland Yearbook and Almanac for 1929: Officers at Bell Island were Adjutant and Mrs. T.P. Robbins, Capt. C. Pye and Capt. H. Blackmore.

On September 10, 1930, The Salvation Army Boys Scouts, numbering 35, made an excursion to St. Phillip's under Scoutmaster Fred Snow. In October 1930, Mrs. Richard Rideout, 80, died at the home of her son, Comdt. T. P. (Tommy) Robbins, officer in charge of the local Corps of the Salvation Army. Comdt. T.P. Robbins was transferred to Bishop's Falls on August 15, 1931. His successor in charge of the Corps was Comdt. N. Cole.

From the Newfoundland Yearbook and Almanac for 1932: Officers at Bell Island were Commandant N. Cole, Captain B. Hallett, and Lieutenant G. Mercer.

On July 25, 1933, the local Corps of the Salvation Army received an official visit from Commissioner James Hay, who was then in charge of the Army in Canada, Newfoundland and Bermuda. He was accompanied by the Divisional Commander, Lt. Col. Burton; Staff Capt. Mundy, Major Cornick and Adjt. C.O. Butler.

From The War Cry, December 12, 1936, p. 13: "Large crowds attended the meetings conducted by Lieut.-Colonel and Mrs. Tilley at Bell Island (Adjutant and Mrs. Hewitt, Captain Legge). An enthusiastic welcome was accorded them on Saturday night. Short addresses were given by Brothers Elijah Blackmore and Gideon Robbins...In the afternoon, a lecture...was given by the Colonel, with Magistrate Hollett acting as chairman...A vote of thanks was proposed to the Colonel by Mr. Stephen Blackmore and seconded by Mr. J.C. Stewart, J.P." and "Sergeant-Major T.M. Wilcox, of Wabana, who recently suffered from a stroke, was visited by Lieut.-Colonel and Mrs. Tilley."

From the Year End Review 1938 of the Daily News: "Practically all of the buildings owned by the Salvation Army were put in order in 1937, but this year new pews were placed in the Citadel, which was also painted. Major and Mrs. Hewitt have had a busy year of supervision. A Ladies Aid, with a membership of 50, has for its president Mrs. Hewitt, and the Treasurer is Mrs. Gideon Robbins. Mrs. Hewitt is leader of the Girl Guides with Misses Martin and Mouland as assistant leaders. Miss Stewart is leader of the 'Sunbeams' with Mrs. Hewitt as assistant. During the past year, many social functions have been held, including concerts, exhibitions and a Field Day in September."

In 1939, Major and Mrs. Woodland became the officers in charge; they were still on Bell Island in 1941.

​In 1941, the Citadel was remodeled, with Ten Test Board added to the interior/ The school was painted that year. 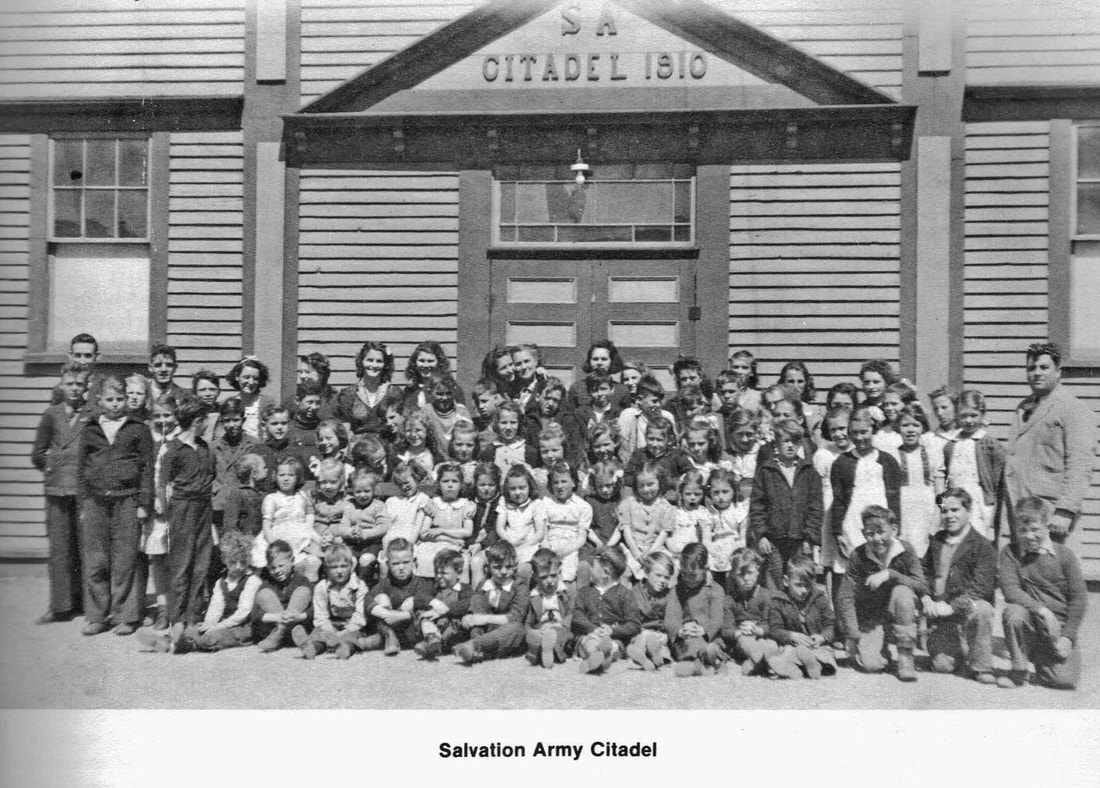