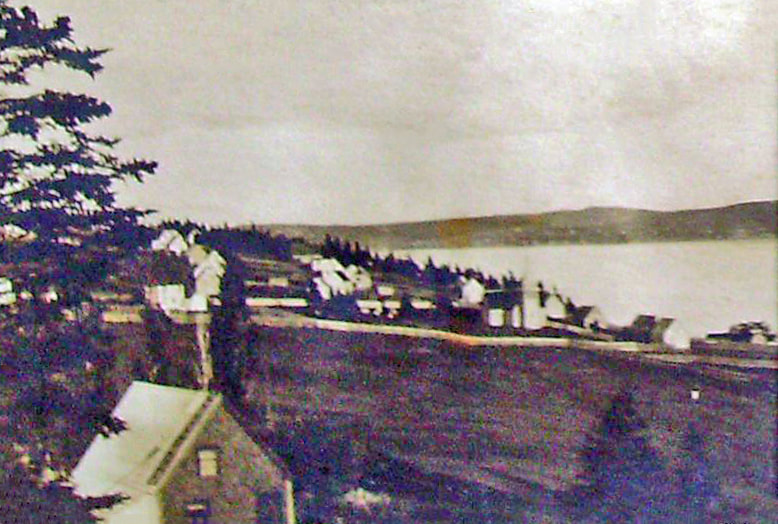 Above is an early photo of Lance Cove, from the west looking east, courtesy of Brian Rees.
​Lance Cove was one of the first populated areas of Bell Island along with The Beach and a few families of Parsons who were living in Freshwater (west), now Parsonsville. This page will feature some photos of Lance Cove down through the years along with snippets of its long and interesting history.
James Pitts (1735-1805) of Kennford, Devon, England was a pioneer settler in Lance Cove and is said to have enticed the Kents, Reeses, Coopers, Hiscocks, Kennedys, Stoyleses, Hammonds, Clements and Bickfords to settle there. The first photo below (source Rev. Lloyd Rees) is of Pitts’ Hill, Lance Cove in 1935. James Pitts' house on the right is said to have been the first permanent residence built in Lance Cove. Rod Bickford notes: It was built by James Pitts in the late 1700s and remained standing until 1944 when it was torn down. The site of its foundation can still be seen (2021). It was built mainly of lumber imported from Nova Scotia and brought to Lance Cove aboard Mr. Pitts' ships. While it was being torn down, the skill that it took to build it was noted. The framework was all hand-jointed using mortise and tenon joints, and the areas around the doors and windows, as well as the roof, and underneath the shingles, were waterproofed with sheets of birch bark. The last person to live in the house was Francis (Fanny) Pitts, James' granddaughter. The house on the left was that of James Pitts' son, James. It was purchased by George Rees Jr. sometime after 1825 and occupied by that branch of the Rees family until 1929, according to Lloyd Rees.​

The photo on the left below is a 2021 screenshot of a Mapquest map of Lance Cove showing Pitts’ Hill as linking with Lance Cove Road in 2 places. The photo on the right is a screenshot of a 2021 Google map that has Pitts’ Hill labelled as O’Neal’s Hill Road. Rod Bickford notes that he only ever heard the hill referred to as Pitts' Hill. F. O'Neil (spelt with an "i") had a general store on the portion of the road above "Stoyles Road" in the 1950s and 60s, so that may be where the the name on the Google map originated. He only ever considered Pitts' Hill as the portion that started at Lance Cove Beach and proceeded up the hill past the old Anglican Cemetery, then straight up to intersect Lance Cove Road at the base of Rees's Hill (which is also referred to as Clements Hill on the Mapquest map). The maps do not show the actual portion of the road seen in the photo above. The photographer was standing very close to the original wharf. The portion of Pitts' Road shown in the photo is no longer used and is barely passable.
In 1840, the first road was completed on Bell Island. This was basically the Old Front Road (now Nish Jackman Drive) that ran from above The Beach to Lance Cove, about 3 1/2 miles, "but to make it useful to the public, it will be necessary to drain many parts, to erect several bridges thereon, and to gravel the entire line." For those living on The Beach, there was no Beach Hill as we know it today. Instead, "the footpath that rose against the cliff was still no more than 1 and 1/2 to 3 feet wide, and very dangerous to climb."​

​In 1841, the first school was built on Bell Island by the Protestant Board of Education at Lance Cove. On August 20, 1843, the first Anglican church, St. Mary's, was consecrated on Bell Island in Lance Cove. Rev. Thomas Boone was its first minister. (It was replaced in the summer of 1872 by a larger structure.)

By August 9, 1847, Captain William Pitts had started manufacturing bricks on Bell Island on the hill on the east side of Lance Cove.

In 1896, there was a Roman Catholic school opened in Lance Cove by Father Patrick O'Brien. 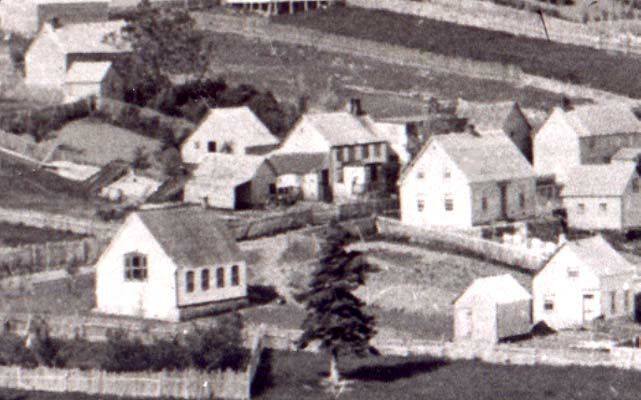 The photo above is of a portion of Lance Cove, either late 19th century or early 20th century. It was posted along with the following commentary on the Historic Wabana Nfld Facebook Group by Rod Bickford October 3, 2018:

​The houses in this photo were owned principally by the Rees family and were clustered in the center of Lance Cove. The structure on the left with the peaked roof and four windows was the School House. It was the first school on Bell Island and was established by the Newfoundland Protestant Board of Education in 1841. It was in this schoolhouse where my Great-Great Grandfather Edward Bickford taught school from 1857-1870. Records from 1857 indicate that in June of that year Edward had 29 students that ranged in age from 4 to 13. Surnames such as Rees, Hiscock, Kent, King, Cooper, Sparks, Leahy, etc. feature prominently. Edward’s salary that year was 32 pounds, 10 shillings or about $2500 if converted into 2018 dollars. Sometime between 1900 and 1927, the peak of the school was removed giving it a mansard roof design. After the building ceased to be used as a school it was used as the local Orange Lodge. It would have been situated at the corner of the road leading to Lance Cove Beach and the lane way leading to where Thomas Rees currently resides and directly behind the house owned by Cybil Rees (which is adjacent to the Seaman’s Memorial).

Despite being established by a protestant group, this school was financed by annual grants from Colonial Government who provided funding to groups "for the gratuitous education of the poor classes." It was also attended by both Church of England and Catholic children as separate schools did not exist on Bell Island until much, much later. Attendance was not mandatory and those who could afford to sent their children abroad for schooling.
​The photos above and commentary were posted by Mary O'Brien in response to the previous photo of the Rees houses and school house. She says of the photo on the left:

It was built around 1800 by James Pitts Jr and purchased by George Rees around 1825. It was torn down in the late 1920’s and lumber from it was used to build Ralph Rees’ house that still stands on Lance Cove Beach.

The photo on the right above shows in the background a house that is still standing above Lance Cove Beach. Vivian Gulliver said of this photo:

The lady tending her flowers is my mother, Mary Rees. The house directly behind her is where I grew up. My father was James Augustus (Jimmie Gus) Rees, who ran the forge. My brother, Rev. Lloyd Rees, wrote a comprehensive history of Lance Cove, which also detailed the sinking of the boats during the war [World War II].

You can read "Remembering 1942" by Lloyd Rees at
https://drive.google.com/file/d/1QAg0LkLHcLxmc5C10Zmb0IjsRf61uVza/view 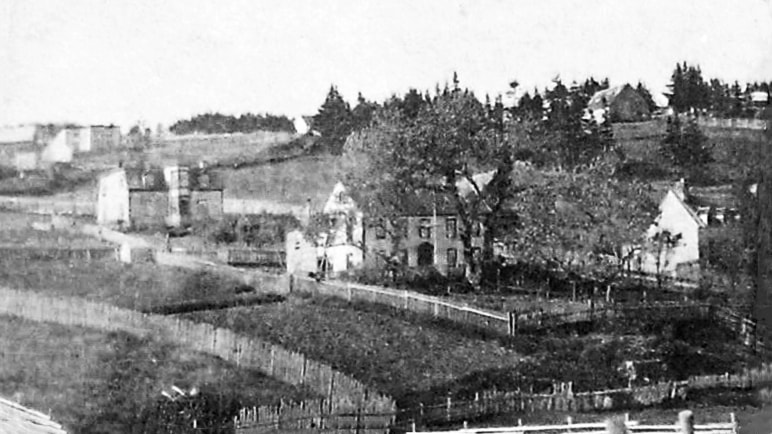 The photo above of Lance Cove, from the south looking north, is from an album of photos taken by William B. Ford c.1902, and is courtesy of Brian Rees. Ford was a civil engineer from Hamilton, Ontario, who came to Newfoundland in June 1902 to work with the Newfoundland Railway before joining DISCO at Wabana in November of that same year. Besides working on a number of engineering projects, he also served briefly as DISCO manager at Wabana in 1903. He married Matilda Rees of Lance Cove in November 1903 and they moved to Ontario in 1911. Ford Street at West Mines was named for him. 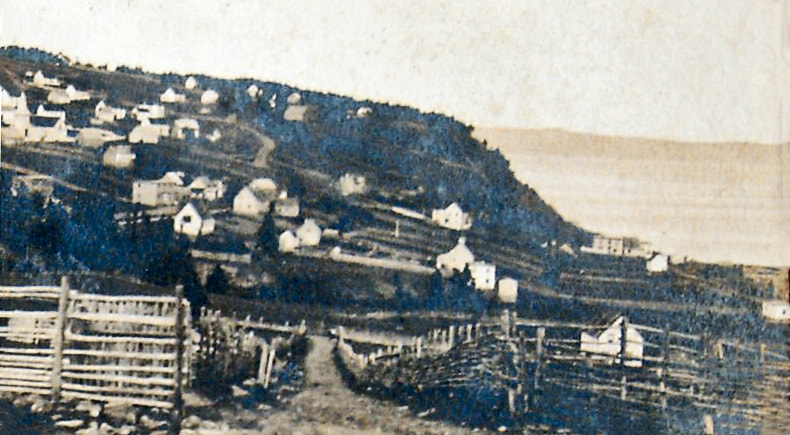 Above is another early 1900s Ford photo of Lance Cove, this one taken from the west looking east. Courtesy of Brian Rees. St. Mary's Anglican Church is in the upper left and the old school house with its high-peaked roof is one-quarter of the way from the left (directly above the fence post in foreground) and midway from top to bottom. The photo below was taken from the same angle around 1925 by Alfred Rees. St. Mary's Church is a little easier to see. By this time, the school house roof had been altered to a mansard roof. 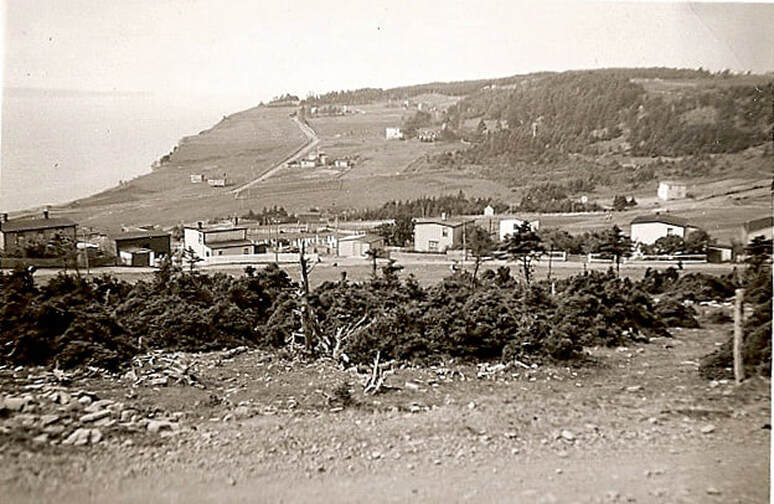 The photo above of Lance Cove (looking towards the southwest) was taken by Florence O'Neill, who was the sole teacher at the all-grade Roman Catholic school in Lance Cove for the 1928-29 school year. O'Neill was from Witless Bay, NL, and became a pioneer in adult education in Newfoundland, starting from that year on Bell Island when, along with her day job, she began teaching evening classes to 40 miners who wanted to learn to read and write. This may well have been one of the first examples of industrial workplace literacy in Newfoundland. She eventually went on to become the Director of Adult Education in the Government of Newfoundland and Federal Department of Indian Affairs, and it all started in Lance Cove! (Read more about her work with Wabana miners on the People page in the top menu.) The photo, courtesy of Helen Woodrow, is believed to be c.1928, but may have been taken at a later date.

The photo above of Lance Cove, looking from the west to east, is from the 1930s, courtesy of Rod Bickford. 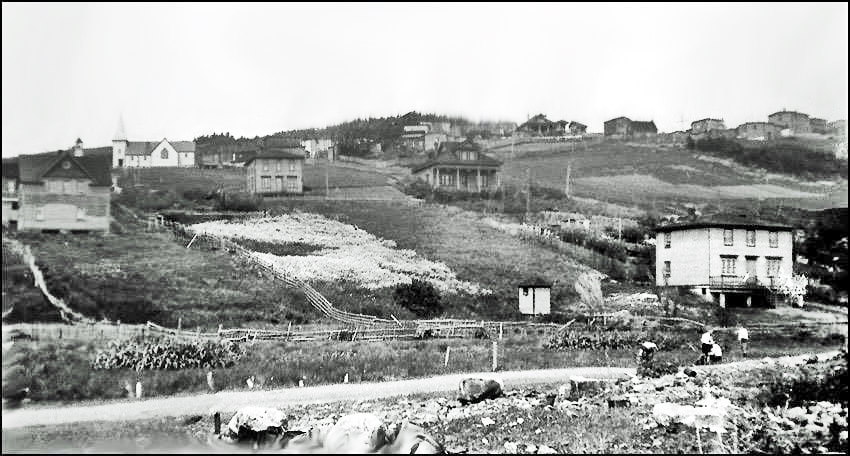 The photo above of Lance Cove, looking from the south to north, is from 1940, courtesy of Rod Bickford. 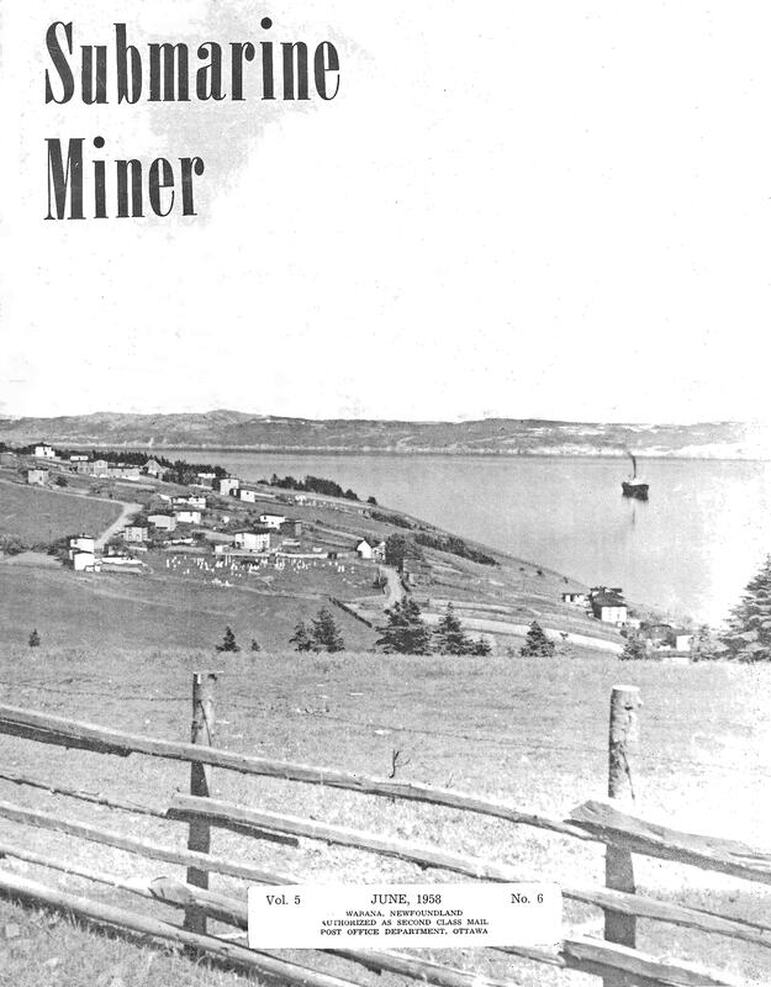 Lance Cove was featured on the cover of the June 1958 issue of the Submarine Miner, the editor of which was a resident of Lance Cove, Phonse Hawco. The description inside reads: This month's cover picture is a view looking across Lance Cove, Bell Island, toward the anchorage, where freighters, awaiting a loading turn at Scotia Pier, drop anchor in the meantime. Codfish is sometimes plentiful in this area and some ships while on the anchorage secure good catches.

Lance Cove had been featured in the February 1955 issue when a dead whale washed up on shore. The photo below is from page 6 of that issue. 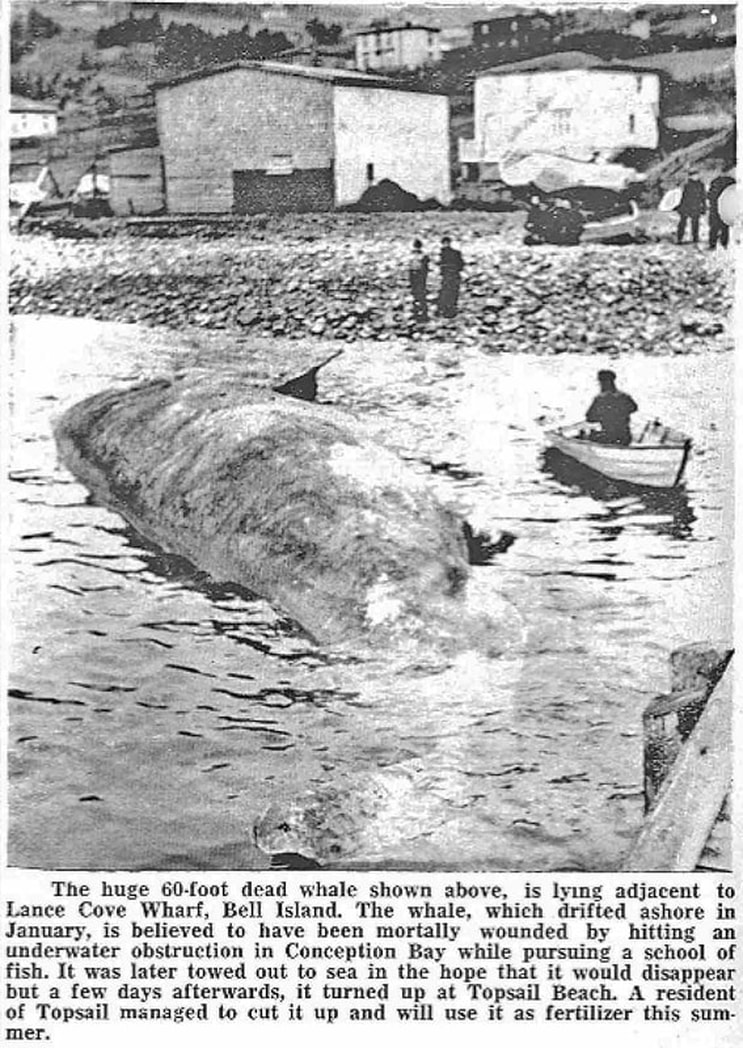 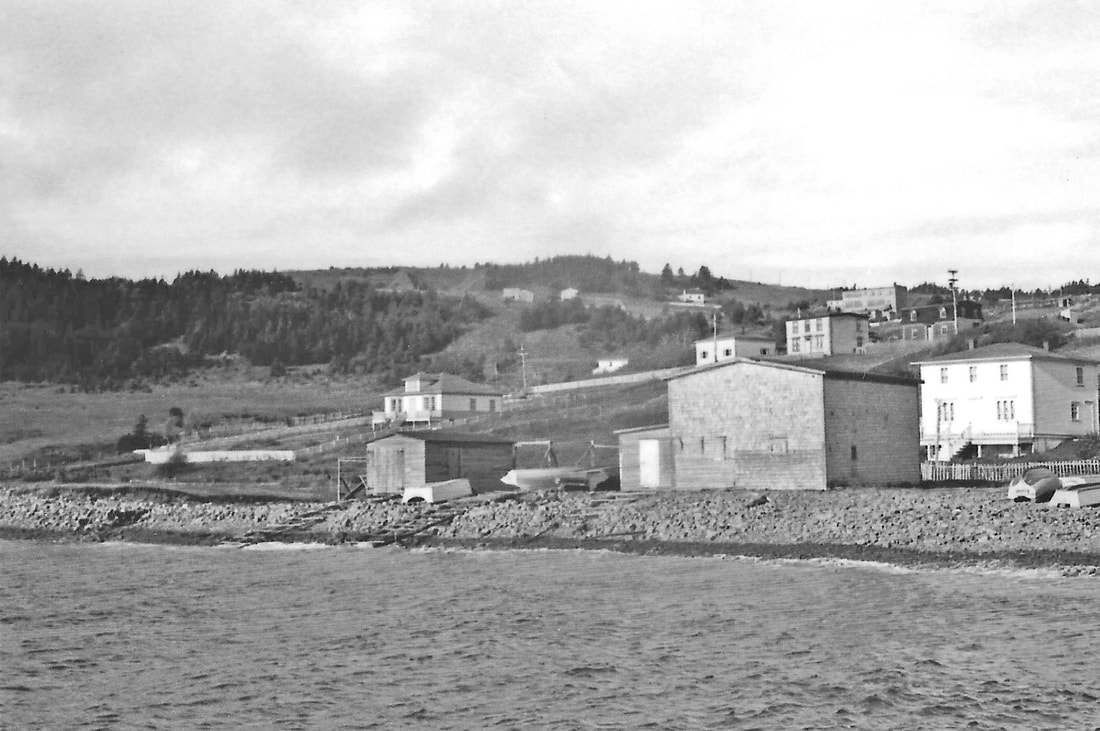 The photo above of Lance Cove, looking west from the wharf, and below looking north, were taken in 1962 by Tom Careless, courtesy of Dave Careless, who is in the photo below, with his dog, Patch. Lance Cove's first public wharf was completed in 1871. 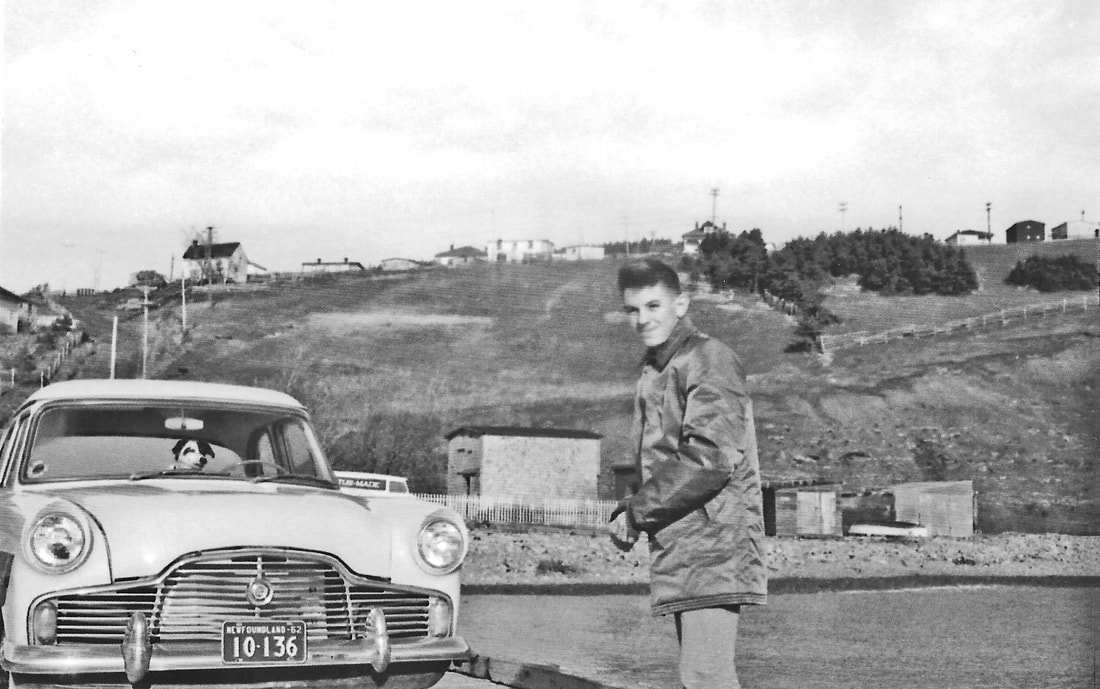 After iron ore mining started in 1895, Bell Island went from being a self-sufficient, quiet farming-fishing economy to a busy industrial area, with people, mail and goods coming and going on a regular basis. By 1900, there was a sailing vessel operating daily between The Beach and Portugal Cove and a tri-weekly service between Lance Cove and Topsail.

In July 1901, the S.S. Greyhound  became the first passenger steamer to go into service on The Tickle. She made three runs daily with mail and passengers. Her route was from Bell Island to Portugal Cove, from there to Broad Cove (St. Phillips) and then to Topsail to connect with the train at Kelligrews, returning to Bell Island by way of Lance Cove. She also made one trip per week from the wharf of J&W Pitts in St. John's with freight for the Island. Pitts, of course, was a prominent Lance Cove name.

On June 29, 1909, a Road Board was appointed for Bell Island proper, Lance Cove and Freshwater.

In the spring of 1938, the Anglican schools at Freshwater and Lance Cove were being enlarged, as was the Roman Catholic school in Lance Cove.

In the mid-1940s, Sacred Heart Roman Catholic Church was constructed in Lance Cove.

In the Fall of 1942, World War II came to Lance Cove twice when four ore carriers were sunk by German U-Boats in the Tickle just off Lance Cove Beach. The men of the community rowed out in small boats in the midst of the danger, in the middle of the night the second time, and rescued as many of the victims as could be found and brought them back to their homes, where the waiting women provided them with dry clothes, food and hot tea and helped nurse them back to health.
​The above timeline of some of the more memorable events is just a small part of Lance Cove's history. You can read much more at https://originalsettlersproject.wordpress.com/.