HISTORY
HEALTH
COMPANY SURGERY
by Gail Hussey-Weir
Created March 2022
The 2-storey flat-roofed building just right of center in the photo below was the Company Surgery that served as a hospital for the most of Bell Island's residents during the mining years. The second floor was the nurses' residence. The photo is of Town Square on January 15, 1937, the day after fire destroyed 20 shops and homes. The building on the left is the former DOSCO Company Survey Office, now called "The Red Building." To the right of the Surgery is the former William Somerton house, which is still standing. Photo courtesy of A&SC, MUN Library, COLL-202.

In the photo below, the dark brown flat-roofed building on the right is the back view of the Company Surgery, c.1960. Photo courtesy of A&SC, MUN Library, Southey Slides, COLL-202. The yellow Company house behind it in the far right is still standing in 2022.

The first recorded mention of a physician on Bell Island was of Dr. Robert Jardine Freebairn, who was the medical officer for the Nova Scotia Steel and Coal Company in 1898. At that time, Scotia was the only mining company on the Island and their first pier and main offices and Dr. Freebairn's surgery were at the location just west of the Beach that is now known as the Dominion Pier area.

When the Dominion Company started up on Bell Island in 1899, Scotia Company sold their first pier and buildings to them and moved further west, where they built what we now refer to as Scotia Pier. Above the pier, they built their new main office and other accommodations, which likely included a new surgery. Meanwhile, Dr. Freebairn did not move with the Scotia Company, but was taken on by the Dominion Company. Scotia Company then hired Dr. Thomson. Each of the two mining company doctors attended to the needs of that company's employees and their families.

Both companies built the majority of their mining infrastructure and staff housing over the first decade of the 20th century, with the Dominion Company concentrating their working offices at the north end of what became known as Town Square where it meets No. 2 Road, which was next to their No. 2 Mine Yard. The Surgery was probably built at the same time as the other buildings, which was about 1907. (In the 1949 Telephone Directory, the Surgery was still referred to in the listing as "Dominion Surgery.")

Over the years, doctors came and went. In 1918, there were three working on Bell Island: Dr. Carnochan was the Scotia doctor, Dr. Lynch was with Dominion Company, and Dr. H.A. Giovannetti had a private practice on Town Square at the corner of St. Pat's Lane. When the two mining companies were joined under one corporation in 1922, the Dominion surgery became the only Company surgery, serving all Company employees and their families. Dr. Carnochan moved to the United States that year and Dr. Lynch remained as the Company doctor. (Dr. Lynch died in January 1942.)

When Dr. Giovannetti left Bell Island in 1934, Dr. Walter Templeman, who had just graduated from Dalhousie University, purchased his property and set up private practice there. At the end of World War II, Dr. Templeman, who had served in the Royal Canadian Medical Corps during the war, returned to Bell Island to take up the position of Chief Medical Officer for the DOSCO Wabana Mines. From then on he was in charge of the Company Surgery, although it seems that he also maintained a private practice as the following appeared in the June 1957 edition of the Submarine Miner on page 2: "Dr. Walter Templeman has taken over the old Company Surgery for private practice." Dr. Templeman continued to work out of the Surgery until 1965 when Bell Island's long-anticipated hospital was finally opened. The new hospital had three doctors: Dr. John Derjanecz was Chief Surgeon; Dr. Walter Templeman was Chief of Medicine; Dr. Brenda Derjanecz was Assistant to Dr. Templeman. Dr. Templeman, age 59, died on September 3, 1966, just one year after the hospital opened.

Meanwhile, the Company Surgery did continue to serve Bell Island for at least a few years after the hospital opened in 1965 and after the mining company ceased to operate on June 30, 1966, although there was no phone number listed for it after 1966. Doug Butler's son, Dean, was born in the Surgery in September 1968; he believes the building was torn down about 1972. Items that had been left in the Surgery were sold off as a fund-raiser for the Wabana Boys' Club.

In the photo below of what remained of Town Square in the early 2000s, the flat-roofed cream and pale green House of Stoyles building just right of center is situated where the old Company Surgery was located during the mining years. 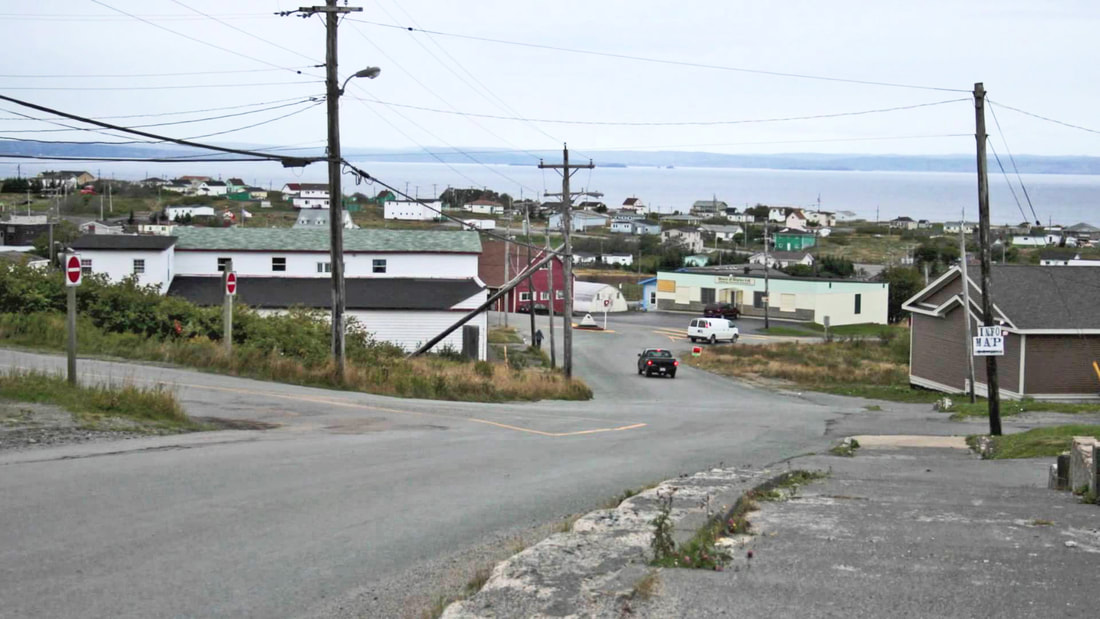