HISTORY
TRANSPORTATION
FERRIES & THE TICKLE
ELMER W. JONES
BELL ISLAND-PORTUGAL COVE SERVICE: 1955-1960
by Gail Hussey-Weir
Created May 22, 2019 / updated April 22, 2022
The Elmer W. Jones, owned by the Newfoundland Transportation Company, began her time on the Bell Island-Portugal Cove service on October 31, 1955. At that time, the company also purchased the Kipawo from the Terra Nova Transportation Company, and she continued her service on the run as the second vessel to the Elmer Jones. The Maneco, which had operated on the run since 1931, was retired from the service then.

The Elmer Jones was licensed to carry 100 passengers and an average of 20 vehicles. Interestingly, before she started her service on the Tickle, the public was asked to offer suggestions for a new name. The "Frederick Carter" was chosen by Premier Smallwood as a suitable name in honour of Newfoundland's fourth Prime Minister. The renaming was announced in the September 19, 1955 issue of the Daily News, however, the name does not seem to have stuck as it was never applied to the ship.

When Bell Island got the new purpose-built ferry, the John Guy in the summer of 1960, the Elmer W. Jones was set to retire. She made her last run on the Tickle on October 18, 1960, at which time she developed a leak and had to be towed to St. John's. An October 19th item in the Daily News declared that the 34-year-old ferry "retired of old age" and that "If her owner, the Newfoundland Transportation Company, can't sell her, she will be scrapped." Continue reading for photos and some of the history of the Elmer W. Jones from when she was built in 1927 to when she was turned into a floating fish plant after her life as a ferry. 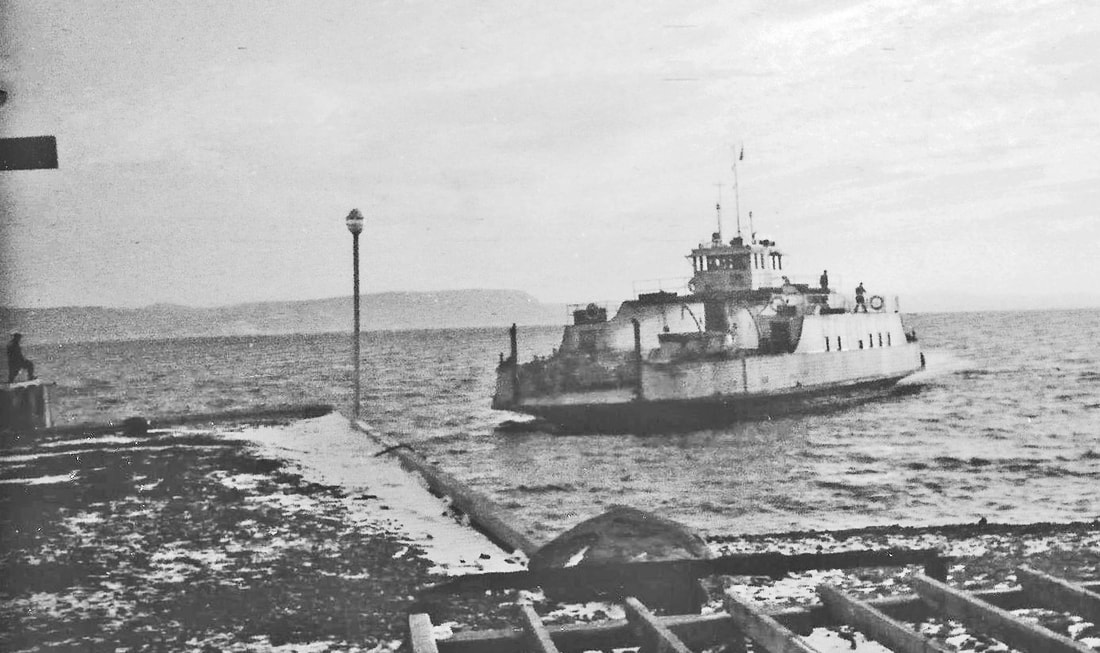 The photo below shows the ferry Elmer W. Jones in its earlier days rounding Chapman's Point in the St. Lawrence River across from Brockville, ON. Built in New London, Connecticut in 1926 by the New London Connecticut Shipbuilding and Engineering Company, she was 277 gross tons. In 1927, the vessel was the flagship of the Brockville-Morristown Ferry Company and was the only diesel-powered American vessel on the St. Lawrence River. During WWII, she was in service for a 2-year period with the U.S. Navy at Norfolk, Virginia, where she was renamed the Codington. On July 26, 1946, she was returned to service at the Brockville-Morristown Transportation Company, where she reverted to her original name. She was rebuilt at Kingston, ON, in 1953 before being sold to the Newfoundland Transportation Company for service on the Bell Island-Portugal Cove run. Source: OhioLINK Digital Resource Commons. 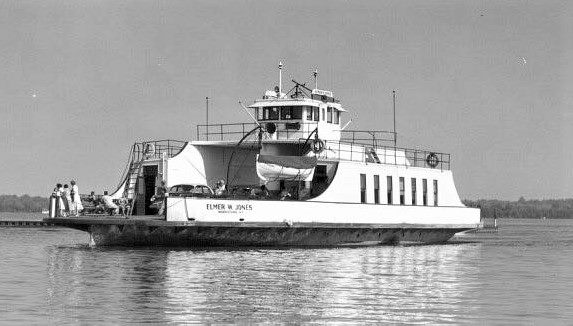 Below: Announcement of the changes coming with the arrival of the ferry Elmer Jones, in the Daily News, Sept. 16, 1955, p. 1. 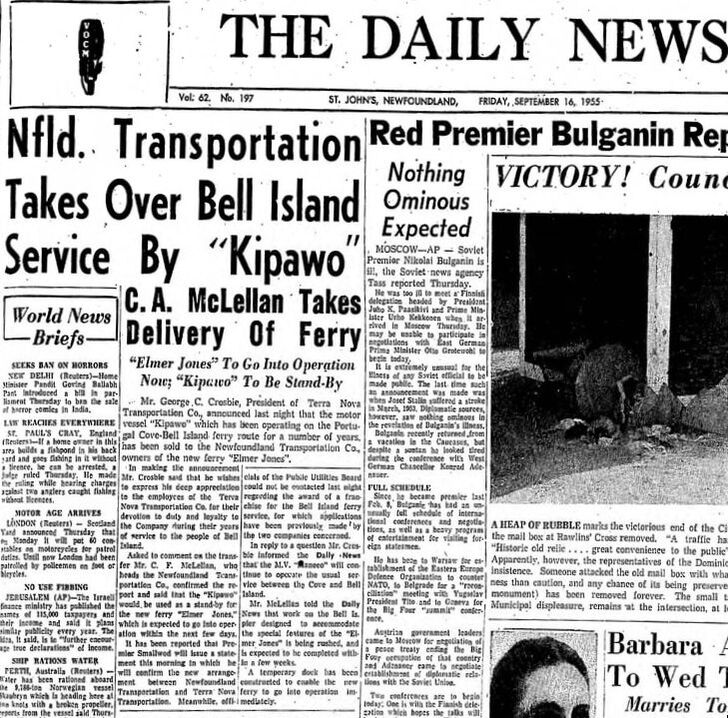 ​Below: Dave Careless on the Elmer Jones in Portugal Cove, Sunday, March 16, 1958, on his way to Bell Island for the first time, having just arrived in Newfoundland from South Yorkshire with his mother, Jennie. His father, Tom, had started work as Assistant to the Works Manager, Victor Southey, in December 1957. The sign on the door on the right says, "Ladies & Escorts Only." Photo by Tom Careless, courtesy of Dave Careless. 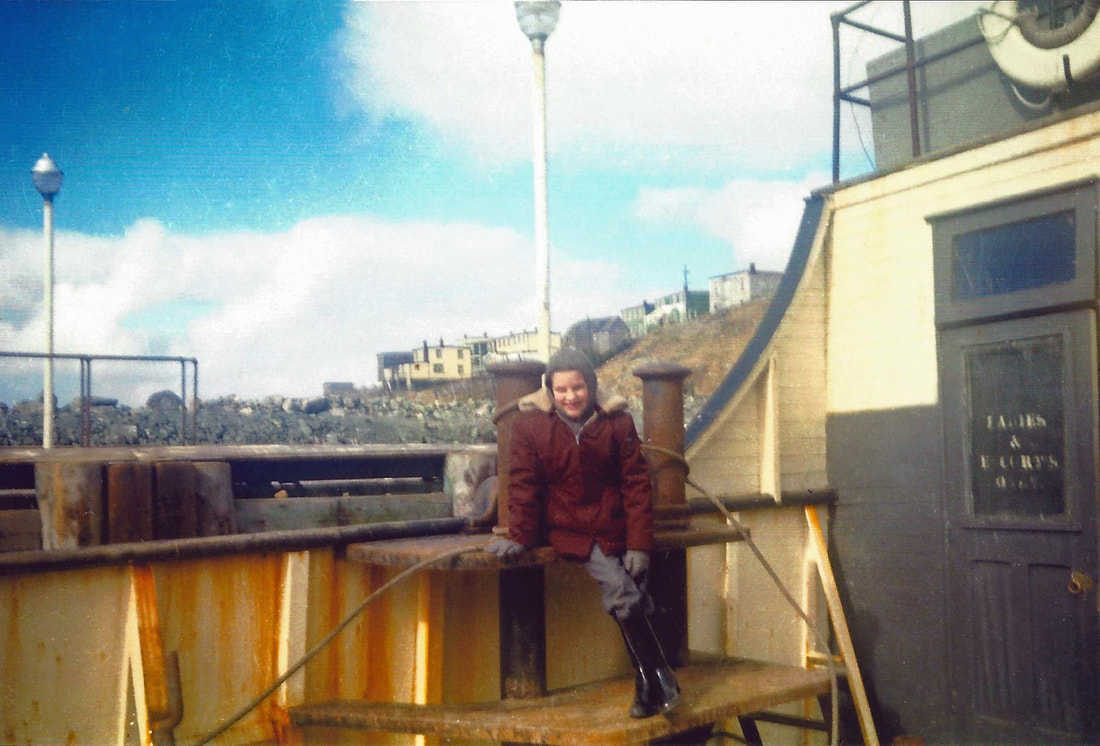 Two years after the Elmer Jones was retired from the Bell Island service, a Daily News article of June 16, 1962 announced: "Ferry's Hull Up For Sale." Sometime later in the 1960s, her infrastructure was rebuilt as a floating fish plant and she was  towed to Port au Choix on the west coast of the Great Northern Peninsula. This part of her history was told in a saltwire.com Telegram news story of September 30, 2017 after the Port au Choix Women's Institute had held a "Culture Days" event in July 2017. It was said of this floating fish plant that "Port au Choix and its surrounding areas were finally liberated because it gave the people (especially widows and [other] women) work and freedom. They were proud to be so self-sufficient with their work."

Below is an image of the derelict floating fish plant in the Back Arm area of Port au Choix. Photo credit: Paul Caines. 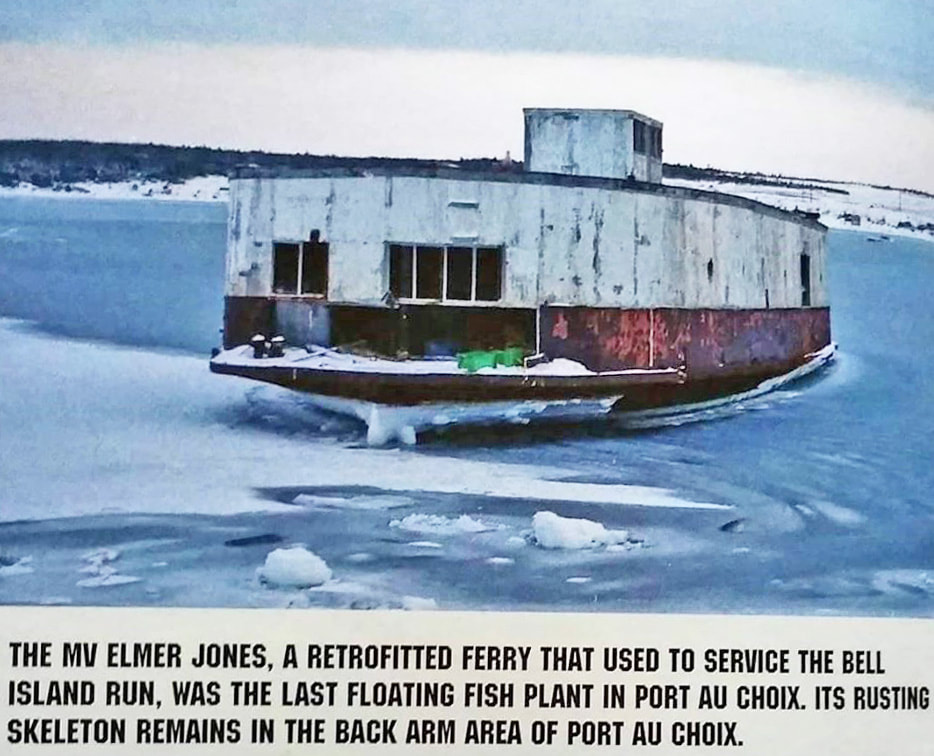 Below is an image showing the further deterioration of the former floating fish plant at Port au Choix. It was posted to the Facebook Group "Lost, Ship, (Shipwrecks) of Atlantic Canada," July 8, 2016 by Rick Hunt. 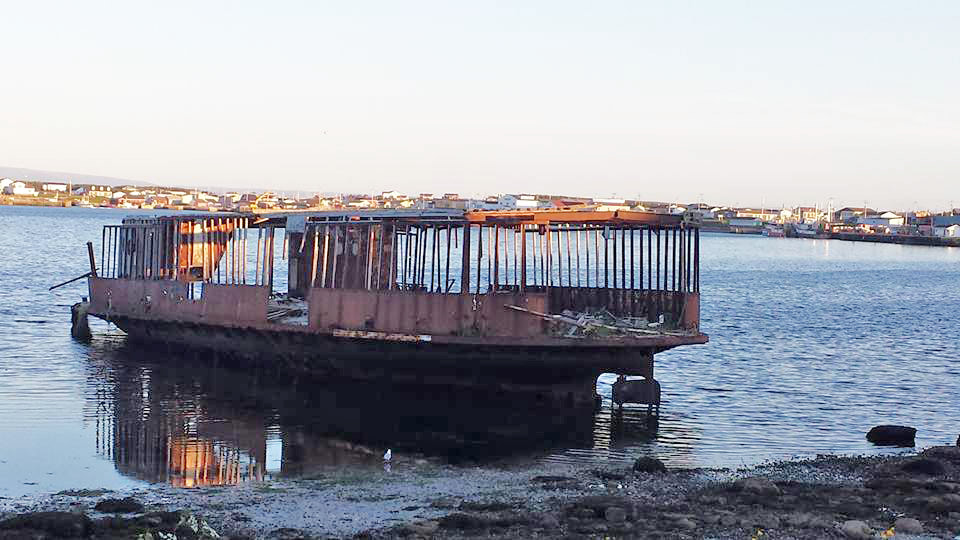 The website "newfoundnews.ca" reported on August 14, 2021 that "The Elmer Jones has been in Port au Choix since the 1960s" and that "the town has been trying to remove the deteriorating ship for years...The Town Council recently received some funding from the Abandoned Boat Program to dismantle and remove the old Elmer Jones from the harbour."