PEOPLE OF BELL ISLAND
​C
BELL ISLAND'S CHINESE COMMUNITY
The first 4 newspaper clippings below speak about the employment situation in Newfoundland in 1906 and Bell Island in particular, where there was a shortage of workers. Chinese immigrants, all men, had been coming to Newfoundland since 1895. Here is an excerpt from the guide that accompanied an exhibit in the spring of 2012 entitled Taking Root: Chinese Immigrants and Their Families in Newfoundland, 1895-1970s: "In the first half of the 20th Century...over 400 men left the poverty and political instability of southeastern China seeking a new start in Newfoundland. In the early years, the immigrants faced taunts and hostility from locals who feared having strangers in their midst. As well, they were the targets of a discriminatory $300.00 head tax imposed on all Chinese immigrants by the Newfoundland government from 1906 to 1949. This debt was the equivalent of approximately three years' salary at the time." Canada, of which Newfoundland was not a part at that time, followed the lead of the American government with a head tax on every Chinese person of $500. Immediately before Newfoundland introduced its own head tax in 1906, there was a big influx of Chinese from Canada who wanted to avoid the $300 head tax. According to a commemorative book, Past Present Future, honouring the 100th Anniversary of the Chinese Community in Newfoundland and Labrador (1895-1995), many of those who came to Newfoundland from Canada ahead of the Newfoundland head tax were employed by the Nova Scotia Steel Company on Bell Island. (That book also states that "Chinese people were still working in the iron mines on Bell Island in 1923, and they began to set up restaurants and convenience stores in the area." However, there were no Chinese people listed in the 1921 Census for Bell Island.) Addison Bown, in his "Newspaper History of Bell Island," wrote that "There was an abundance of work on Bell Island in 1906 but a great shortage of labour was in evidence. The Labrador fishery was being actively prosecuted in those years and Sydney had drawn away large numbers of men from Conception Bay as well. The Daily News reported in May that 16 Chinamen had left St. John's for Portugal Cove to go to work in the mines. They drove to the Cove in three carriages. Over 300 men were said to have deserted the mines to go fishing because of the good voyage in the previous two years."
There are no Chinese names listed in the 1904 or 1913 Directories for Bell Island. The 1915 Directory lists "Duck Lee Laundry," but no other Chinese names. The 1919 Directory lists "Quong Lee Laundry," but no other Chinese names.
​The 1921 Census for Bell Island does not list any Chinese residents.
NOTE: Regarding the listing of names, ages, and other facts in the Census of Newfoundland, information can easily have been misprinted and misinterpreted both in the original taking of the Census and in the later transcription of that handwritten work into type and onto other media. This is true with even the most familiar of Newfoundland names, but is much more so with unfamiliar Chinese and other non-British names. For example, the 1935 Census for Bell Island lists "John Hong Wing, age 20. The 1945 Census lists "Wingjohn, Hong," age 34. In the absence of anyone else with any combination of these two names living anywhere in Newfoundland in 1935 or 1945, and considering that Wingjohn Hong declared in 1945 that he was living on Bell Island in 1935, I am assuming, despite the age discrepancy, that these two listings are for one and the same person. If you have any information regarding any of the names listed here and can correct any errors, mis-spellings, etc., or if you know of other names that should be here, please get in touch at "historic.wabana@gmail.com".

A more reliable document for the names of Chinese immigrants to Newfoundland is Newfoundland Register Arrivals and Outward Registrations: Registration of Persons of Chinese Race Admitted Into the Colony of Newfoundland Under the Provisions of the Chinese Immigration Act, 6 Edw. V11 Cap.2, June 4, 1910 to March 26, 1949. (This is online at collections.mun.ca.) In the listings below of people of Chinese nationality recorded in the 1935 Census and 1945 Census for Bell Island, I have tried to match up names from the Census with names in the Register of Arrivals... In a few cases, some names seem like fairly good matches and I have noted those. In other cases, I could not be certain of matches because of the spellings of names.
Chinese residents of Bell Island in the 1935 Census:

Census area - Town Square to East End Pt. 1:
​Hen, Hong: Head; age 54; Married; religion-blank; Laundry; born China; Nationality Chinese; entered country in 1929;
lived in St. John's in 1935; Laundry in 1935.
[NOTE: The surname that was actually listed on Chebucto Grand Banks website under "1945 Census. Provincial.
​                    Chinese Population Across the Island," (of Newfoundland) was "Ho" but all other details were the same. Was this
the Chinese laundry man known locally as "Honey Blue Bag," so called because he carried laundry on his back in
a blue bag?]
Some Chinese Bell Islanders in the 1948 List of Electors. NOTE: I do not have the full list of Electors, so this is probably not complete:

​Listed in the 1957 Telephone Directory for Bell Island: 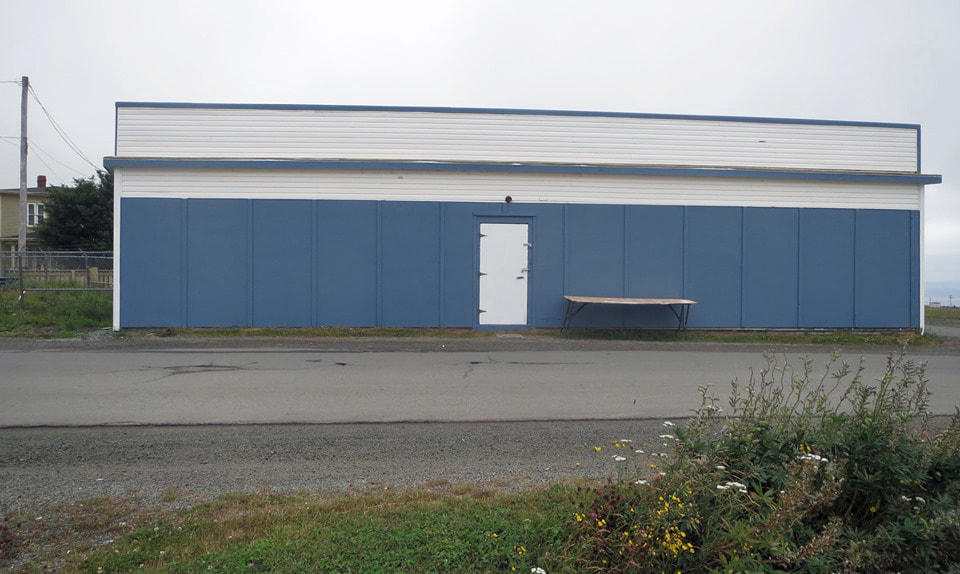 ​"Mr. Tom Hong began in the restaurant business in the late 1930s on Scotia Ridge, Bell Island. That restaurant and store were operated by Tom's sons, Sam and Wally Hong. Ted Hong, Tom's grandson, went back to Hong Kong in the early 1960s to learn the art of Chinese cooking and, on returning to Canada, spent a couple of years in Toronto furthering his skills. He then returned to St. John's and convinced his father Sam, mother Lum S, and uncle Wally to open a first-class Chinese restaurant. The site they chose was Kenmount Road, where the Kenmount Restaurant opened in 1965 and has operated continuously since then, a period of 46 years [54 years as of 2019]. The restaurant is still owned and operated by the Hong Family today.

"In addition to the wonderful meals at the Kenmount Restaurant, many will also remember getting both Chinese and Canadian food at the A1 Take Outs located on both Topsail Road and Duckworth Street. These take outs were owned and operated by Ted Hong and his wife, Jane, in the 1970s. As well, there have been several successful take outs in the Village Mall owned and operated by Wally Hong for many years.

"Both Sam Hong and his son, Ted, were active members of the Restaurant Association in its formative years, with Ted serving on the Board of Directors for a number of years.

"Mr. Sam Hong passed away in 1981, but Ted is still an owner of the Kenmount, while Wally is enjoying a well-deserved retirement. The Hong family have been active participants in the restaurant and food service business in Newfoundland for almost 75 years [83 years as of 2019]."
Hollywood Cafe
Town Square
​
Imperial Cafe
​Bennett Street (at Bown)
The Paradise Cafe
Bennett Street (East)
c.1930-c.1966
​Wing John Hong, Proprietor
The Paradise Café, c.1930s to 1966, was located on the south side of Bennett Street, 3 doors east of the intersection with the East Track (now Steve Neary Blvd). The woman in the photo below is possibly May Hong. (Man and boy unknown.) Judging by the clothing, the date was likely mid to late 1950s. 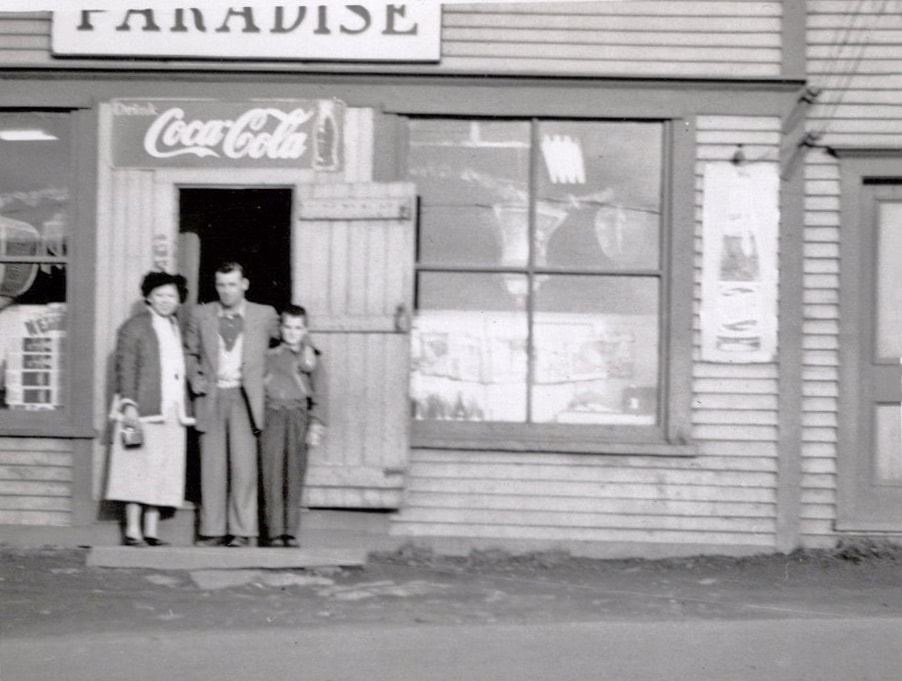 The photo below is from the 1997 book, Behind the Scenes, by RCMP officer John Religa who was stationed on Bell Island from 1954 to 1961. The Paradise is the small building third from right in that photo. On pages 54-55, Religa writes:
For the first two years that I was on Bell Island, we ate almost all our meals at the Paradise Café. It was just down Bennett Street from the Detachment. The Paradise was a small store and restaurant owned by Hong Wing John. His wife, May, and her mother, whom we all called Mommy, helped him run the business. Their home was attached to the rear of the store. The Café had four small tables, a pinball machine, a magazine rack and a display case containing mainly knick-knacks. Bacon, eggs and toast were the main fare for breakfast. Almost all the other meals were chicken and chips, pork chops and chips, or wieners and beans. Now and again Mommy would cook us an excellent meal of fried rice. She did all her cooking on a coal stove in a kitchen at the back of the store. Wing kept a record of everything that we had, including the nickels for the pinball machine. When we received our pay cheques, we’d go down and have Wing cash them so we could pay our bills. Before he went into his house to get some money, he’d put out a bottle of whiskey on the counter in the kitchen. If you were off duty, you drank as much as possible before he got back.
The date of this photo was after 1954, when the Immaculate Conception Church in left background was built, and before 1961, when John Religa left Bell Island. 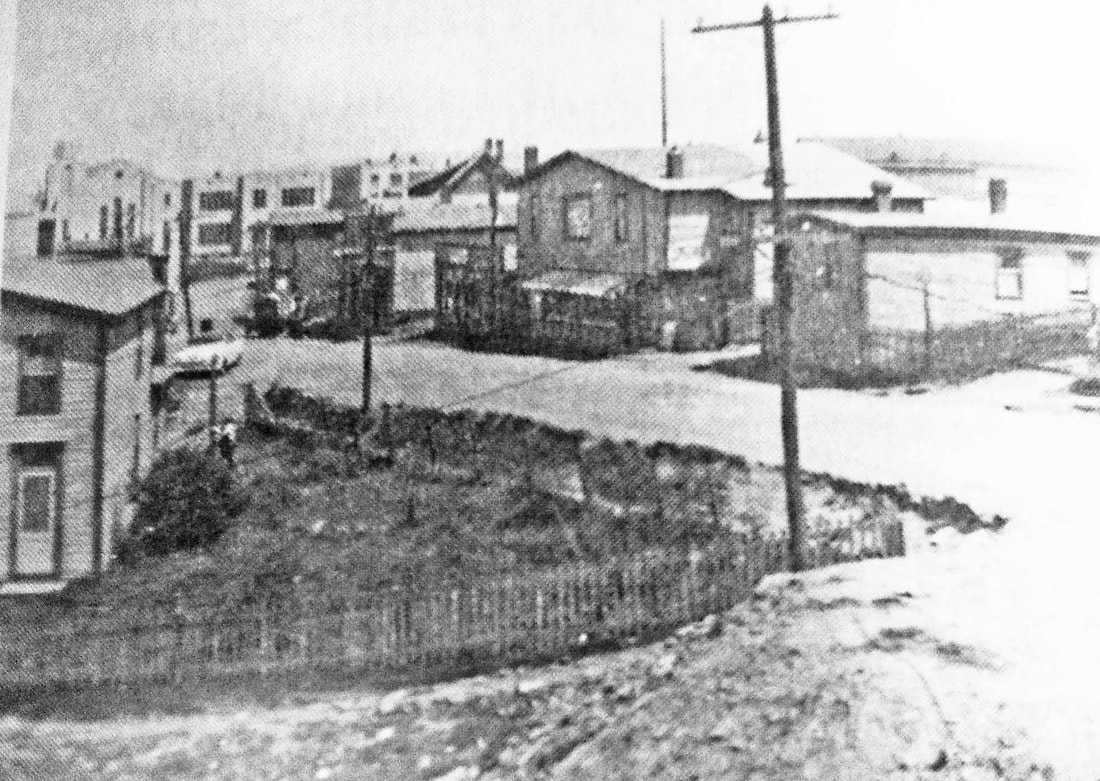 Delicatessen Store Reopens: The Paradise Delicatessen, which was gutted by fire during the past summer, opened for business yesterday. This store is on Bennett Street in the heart of the business district and is one of the nicest of its kind on the Iron Isle. The work of renovating and redecorating was done by the Enterprise Construction Company. The popular proprietors of this store are Mr. and Mrs. Wing John Hong. Mr. Hong has been a resident of the Island for 28 years, and is well and favourably known to all on the Island.
The Sun Cafe
Bennett Street (West)
c.1957-1969
​Yan Quon William (Billy) Hong, Proprietor
The following newspaper photo and article are from the Evening Telegram, c. October 28, 1961. The article was found at the United Church Archives, St. John's, Box 2 of Bell Island Records. 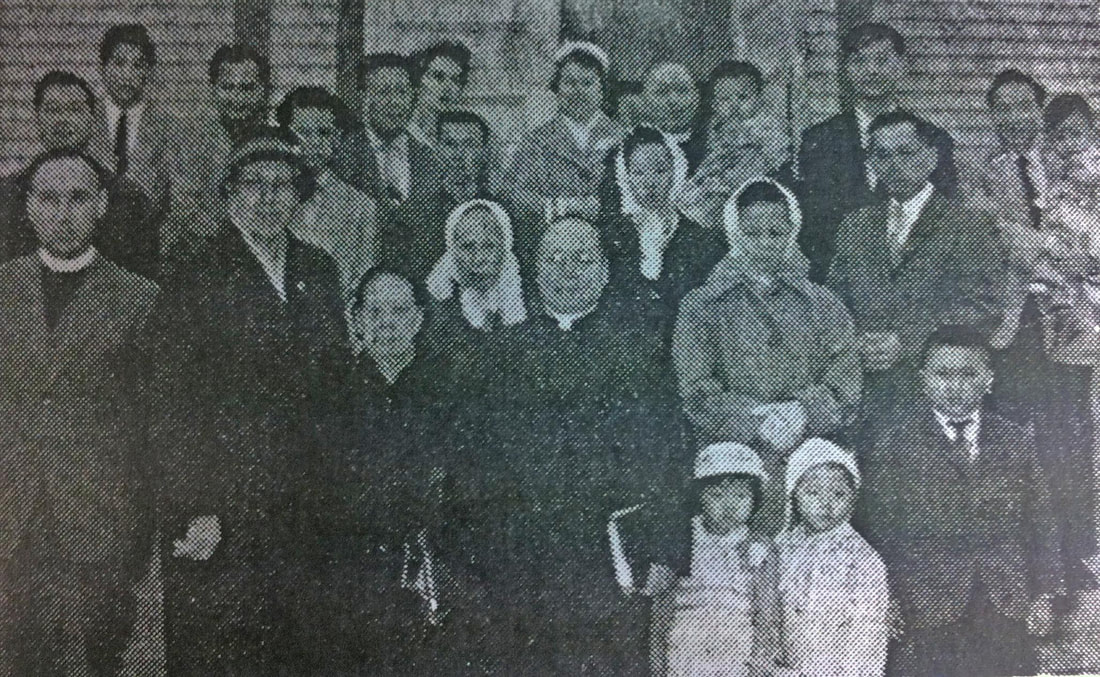 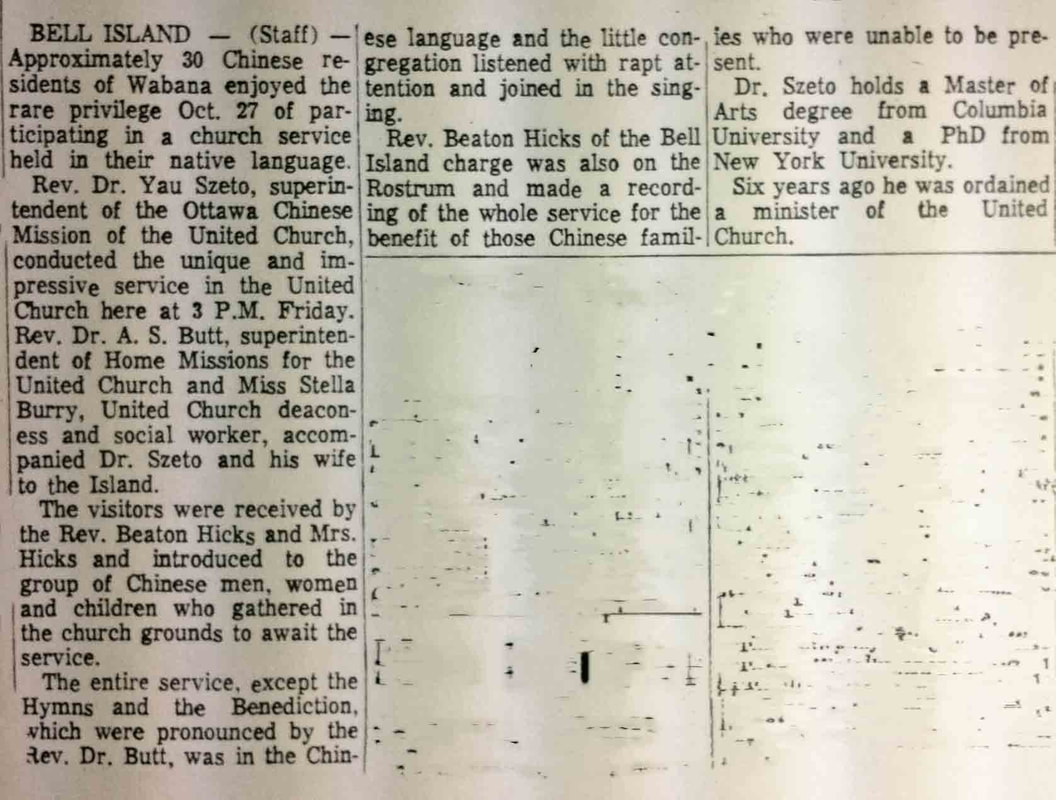