PHOTO GALLERY
BELL ISLAND SPECIAL HOUSING ASSISTANCE PROGRAM
PHOTOGRAPHS
Introduction
The closure of the Wabana submarine iron ore mines was drawn out over a 15-year period beginning in 1950 when the first of the four mines was shut down. Large numbers of miners commuted weekly to Bell Island from their homes around Conception Bay; they would have been the first to be laid off because they were not permanent residents. In spite of that closure, parent-company, DOSCO, poured millions of dollars into an extensive expansion and modernization program of the operation over the next six years, however, improved methods in steel-making meant that Wabana's customers began turning to mines in Labrador and South America for higher grade ores.

A.V. Roe Canada Ltd. purchased DOSCO in 1957, and two years later closed the second Wabana mine. After the first one closed, there had been a small but steady exodus of former miners who heard the call of southern Ontario, where jobs were said to be plentiful. One place than many had gravitated towards was then called Galt, later renamed Cambridge, where large factories needing workers were being built. The second closure saw more people heading west for those jobs. By the time the third Wabana mine closed in 1962, those affected headed west in greater numbers. Those already settled in Ontario wrote home to say there were jobs to be had, and people naturally went where they had relatives and friends to help them find work and lodgings. The final Wabana mine closed on June 30, 1966, causing a mass migration and pleas for help from government to assist with the move.
​
A combined Provincial and Federal Government Resettlement Program had been in place for small outport communities in Newfoundland for a number of years. In 1967, when it became obvious that the mines would not reopen, a similar program was set up for Bell Island home owners with the title "The Bell Island Special Housing Assistance Program." The offer was $1,500. no matter the age or condition of the house (equivalent to about $11,000 in 2021). Each person who applied to take advantage of the program was assigned a number. A photographer went to Bell Island and photographed the front of each applicant's house, writing the applicant's assigned number in chalk on a board that can be seen leaning against the house or fence in each photograph in this collection. The applicant's letter and house photograph were then filed together for reference. The deadline for the home owner to turn over their house was August 31, 1969. If they did not plan to leave Bell Island by that time, they would not receive the $1,500, so there are some photographs in this collection of houses whose owners applied to be considered for the program, but who then did not sell. Once the house was turned over, the owner could buy it back for $1.00 on the condition that they tear it down; they could then use the lumber to rebuild off the Island, and a number of people were known to have done this. Some homes that were in poor condition were resold for $1.00 to people who were willing to tear the house down and use the lumber for firewood. The Department of Welfare retained some homes for housing families on social assistance, so some of the houses in this collection may still be standing today.

I will be posting below some of the photographs taken as part of this program, with any information I can find for each image. You can see all the photos from the Stacey Collection that are held at Archives & Special Collections, MUN Library, at Bell Island Special Housing Assistance Program Photos - Memorial University DAI (mun.ca).
Let's start with the house I grew up in (assigned No. 465, a three-bedroom bungalow):
This is No. 8 Tucker Street in 1969, when houses on Bell Island did not have street numbers and when my mother, Jessie Hussey, still owned it. My grandfather, John Dawe, had built a small 4-room house around the corner on his property on Armoury Road in the early 1940s for my mother's older sister to live in while her husband was serving overseas in World War II. When he returned, they moved into a new house at The Front and my parents moved into the one on Armoury Road. I was born there in 1948. About 1950, they moved the house halfway down Tucker Street and built a third bedroom, bathroom, back porch and pantry onto it, making it the house in this photo. My father, Stanley Hussey, a miner, died in 1961 at age 39 of Congestive Heart Failure. My brother left home for university in St. John's a year later. By 1966 when the mines closed, both my older sister and I had left Bell Island as well. Mom was working at Charles Cohen's Store on Town Square, with only our 9-year-old sister still at home. In the months following the shutdown of Bell Island's only industry, all my mother's relatives and most of her friends left for work elsewhere. When "The Bell Island Special Housing Assistance Program" was introduced in 1967, she was seriously considering moving off Bell Island herself, but she had little savings to help her get established in parts unknown. She did have a full-time job and her house, plus her youngest was still in school so, weighing the options, she decided to hang on until 1973, when she moved to Ottawa where her son had settled. By that time, things had stabilized somewhat on Bell Island, and she was able to sell her house for a few thousand dollars more than the government had offered in its program. 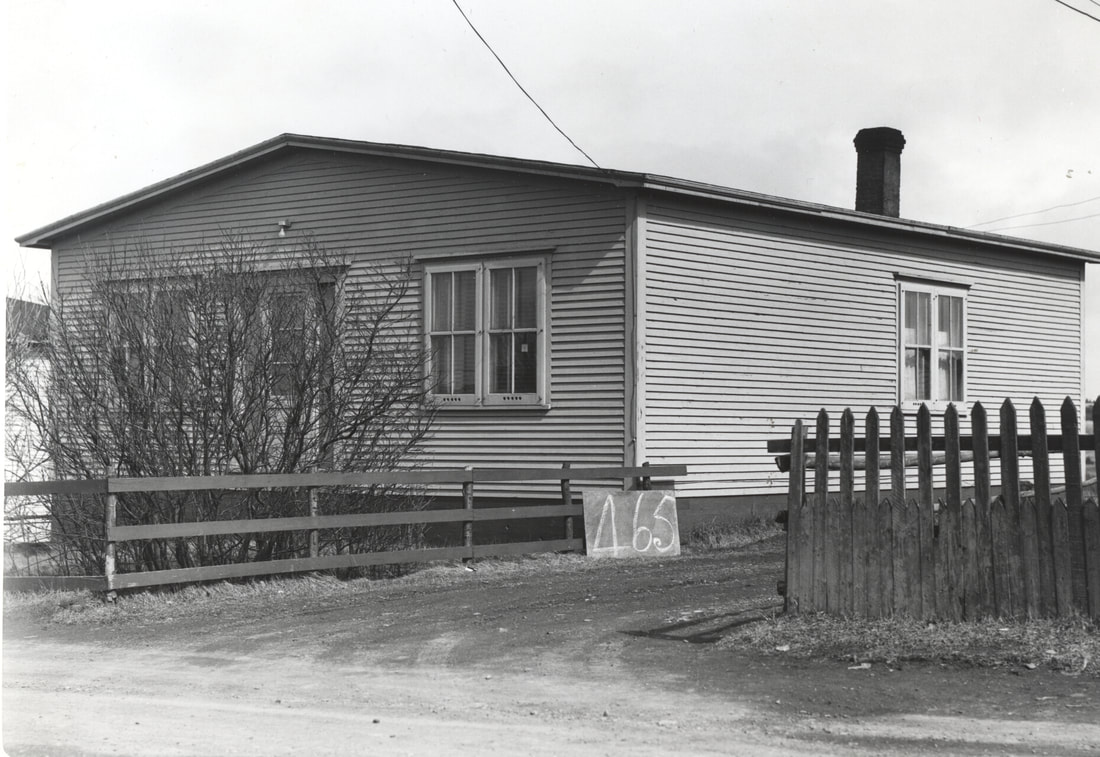 No. 141, a two-storey business and residence(?) perhaps at the East End or Front? Pepsi signs cover one of the front windows. Written on the bottom left corner of the photo is the word "demolish." 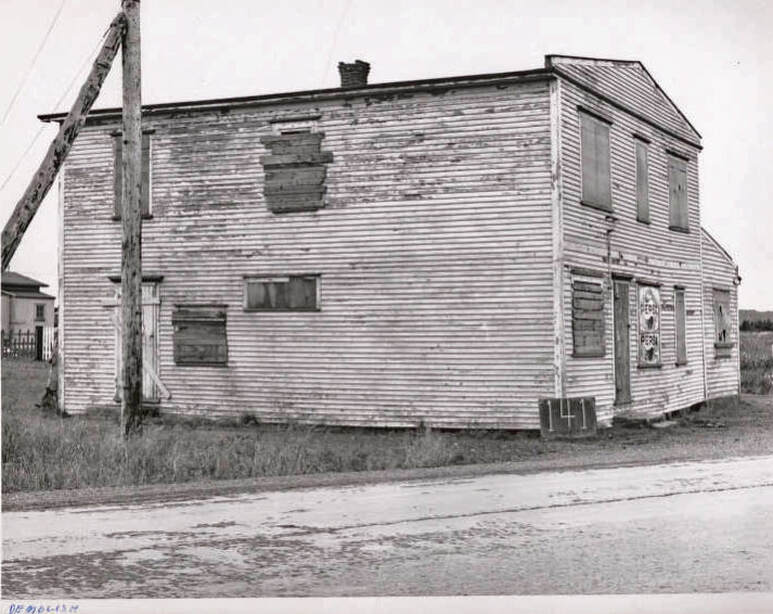 No. 222, a one-storey house and shop on McCarthy Street, Scotia No. 1, West Mines, owned by Nicholas & Mary Byrne in the 1960s, and then by their son, Kevin and his wife Loretta Byrne.

No. 279, a two-storey house and detached small shop. "For Sale" sign over door of shop. Written on the bottom left-hand corner of the photo is the word "rentable." 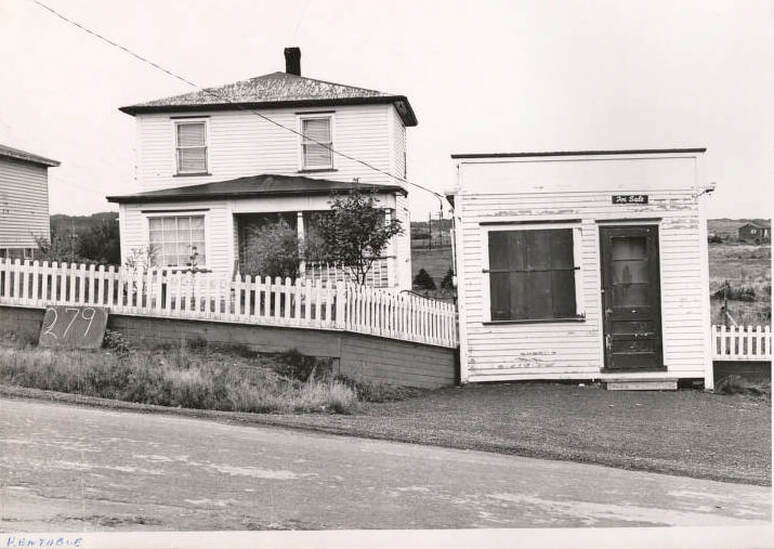 No. 464, a one-storey business with attached garage, maybe on The Green. 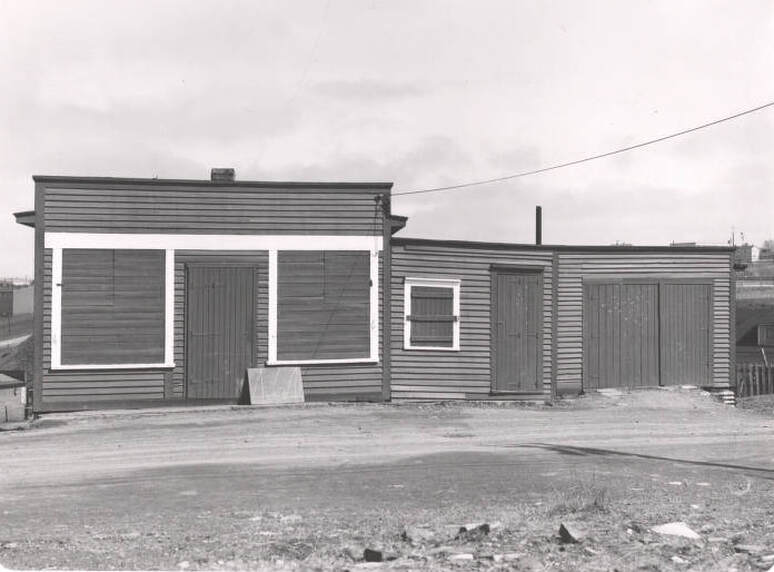 No. 479, a two-storey business and residence. This was Walter Squire's Store and residence on Main Street next to the CLB Armoury. (Information confirmed by his grandson, Jim Proudfoot.) The store was last listed in the telephone directory in 1966. 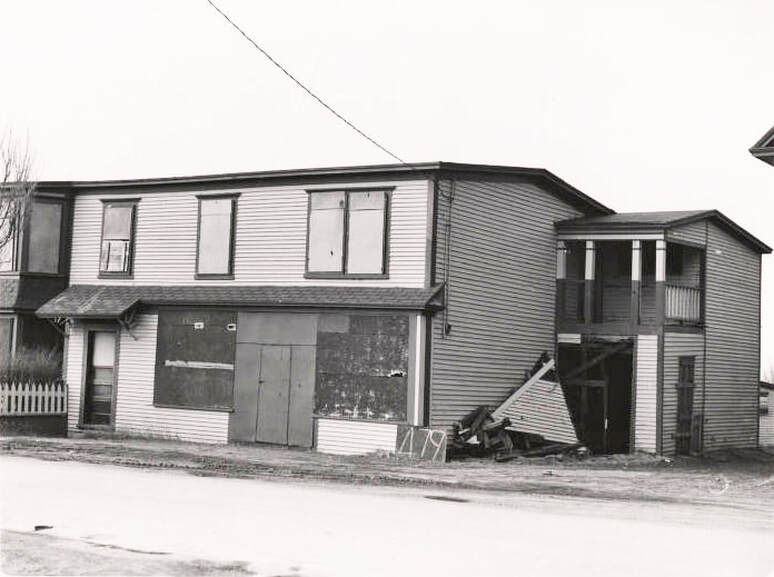