HISTORY
MUNICIPAL GOVERNMENT
by Gail Hussey-Weir
Created July 2020; updated October 2022
The Town of Wabana
The photo below is of the building at 14 Middleton Avenue that now houses the offices of the Town of Wabana. At the time the photo was taken, c. 1963, it was the Vocational Training School, then later, the Bell Island Campus of Cabot College. The Town Council moved to the building sometime in the mid-1990s. This photo is #6 of the Southey slides, A&SC, MUN Library.

Before 1949, less than two dozen municipalities in Newfoundland were incorporated. Following Confederation with Canada, new Government assistance programs for incorporated towns was the deciding factor for the incorporation of many towns wishing to finance expensive projects such as water and sewer systems and road paving.

A plebiscite was held in 1949 asking the people of Bell Island if they favoured the establishment of a town council. The Front, Lance Cove and Freshwater remained unincorporated, while the area surrounding the mines incorporated as the Town of Wabana on August 29, 1950. A few years later, The Front joined Wabana.

The name Wabana was taken from the name (an Abnaki Indian word for east light) that Thomas Cantley had given the mining operation when mining got started in the summer of 1895. This was fitting because the town boundaries took in the area of the mine locations.​ At first, the boundary was drawn along the line of brooks [going south to Main Brook] and took in all the area around the mines, which included the bulk of the Island's population. A year or two later, the boundary was extended on petition to include the Mercer Street-Memorial Street Area. The boundaries as they stand today are laid out in the 1996 Municipalities Act below:
The Boundaries of the Town of Wabana
Under the Authority of Section 3 of the Municipalities Act
and the Subordinate Legislation Revision and Consolidation Act,
Consolidated Newfoundland and Labrador Regulation 492/96,
​as set out in the Schedule
Schedule
Beginning at a point at highwater mark in the south shoreline of Freshwater Cove, that point being located at the mouth of Main Brook where the east bank of Main Brook intersects the south shoreline of Freshwater Cove at highwater mark;
Then running in a generally easterly direction along the sinuosities of the north shoreline of Bell Island via Redman's Head to the most easterly point of Eastern Head;
Then running in a generally southerly direction along the sinuosities of the east shoreline of Bell Island via Poll's Head, Long Harry Point and Pulpit Head to the most southerly point of the Beach;
Then running in a generally southwesterly direction along the sinuosities of the south shoreline of Bell Island via the Ferry Terminal and the Dominion Pier to a point at highwater mark on the Scotia Pier, that point being located south 28° east a distance of 150 metres, more or less, from a point in the western limit of the Scotia Road;
Then running along the western limit of the Scotia Road to its intersection with the north bank of Main Brook;
Then running along the north bank of Main Brook to the outflow at West Dam;
Then running along the south side of West Dam Pond to the point where Main Brook flows into it;
Then running south 60° west a distance of 1,150 metres, more or less, to the eastern side of the brook flowing into Scot's Gulch;
Then running along the east side of the brook to its point of intersection with the north shoreline of Bell Island;
Then running in a generally northeasterly direction along the sinuosities of the north shoreline of Bell Island via Scot's Gulch, Ochre Cove, Youngster's Gulch, Upper Grebe's Nest, Gravel Head, Grebe's Nest, Gull Island North Head, Gull Island South Head and Freshwater Cove to the point of beginning.
All bearings being referred to grid north.
Source: https://www.assembly.nl.ca/legislation/sr/regulations/rc960492.htm​ (website accessed Oct. 24, 2022).
Below is an early 1900s map of Bell Island, drawn decades before the Town of Wabana was incorporated, however, it has most of the landmarks named in the Boundaries Schedule above. "Scotia Road" is marked on this map as "N.S.S.&C.Co. Tramway." What we now know as "West Dam" is called "N.S.S.&C.Co. Upper Dam" on this map. Main Brook is not named, but it is clearly marked and you can see it running into the Upper Dam, then along to the Lower Dam and from there east to Freshwater Cove. The western boundary of the Town of Wabana follows the straight line that is marked out on the map as the western boundary of the Dominion Iron & Steel Co. property.
Source:  The Rooms Provincial Archives, Bell Island Map Collection, MG19 B-58 334.

​Timeline of Mayors of the Town of Wabana
​September 1950 to July 1955: Max Hutchings

​Source: Town of Wabana website (July 2020)
The newspaper clipping below is from the Daily News Year End Review, Dec. 31, 1959. It shows the first Wabana Town Council Office located in the former DOSCO Survey Office, which is still standing, on Town Square where it meets No. 2 Road. The Town Council moved from there to the former Vocational School/Cabot College in the mid-1990s. (In 2022, this building is owned by Tourism Bell Island and is known as "The Red Building." It houses the "Bell Island Music Hall of Memories.") 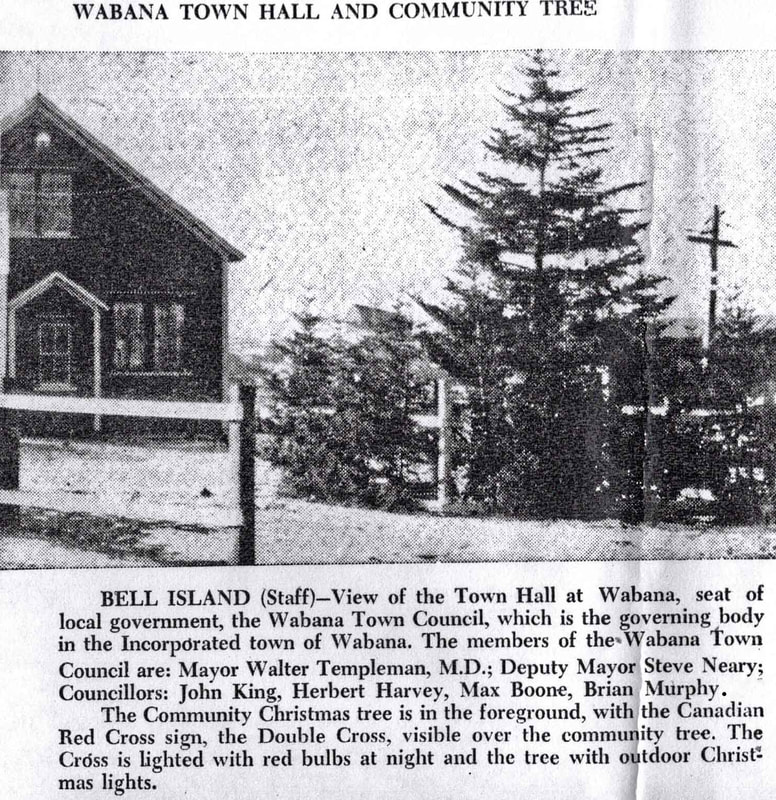 Some Early History of the Town of Wabana
The following information about the Wabana Town Council's first seven years is from "Wabana Bell Island: Report on the Municipal Plan, January 1958" by Canadian-British Engineering Consultants, Halifax, Nova Scotia. In July, 1956, the consulting firm had been contracted by the Town of Wabana to work in cooperation with the Provincial Town Planning Authority and Dominion Wabana Ore Limited in planning "revisions and authorized extensions to the Townsite of Wabana."(This was at the culmination of DOSCO's 22-million-dollar expansion and modernization program for Wabana Mines when all was looking rosy for a bright future for Bell Island. Alas, by the time the report was presented in 1958, things were already starting to turn in the wrong direction for the mines. Closures started in 1959 with No. 6 Mine, continued in 1962 with No. 4 Mine, and concluded in 1966 with No. 3 Mine.)

The Town of Wabana was incorporated on August 29, 1950. Its boundary was drawn along the line of brooks [going south to Main Brook] and took in all the area around the mines, which included the bulk of the Island's population. A year or two later, the boundary was extended on petition to include the Mercer Street-Memorial Street Area.

Before the incorporation of the municipality, no form of local government existed. There were only a few local road boards to deal with the maintenance of certain roads. Education was managed by the various religious denominations, public health and some of the main road systems by the provincial government, and policing by the R.C.M.P.

The main services provided by the Council are [in 1958] garbage and waste removal, road maintenance including snow removal, street lighting, and fire protection. The Council also employs a full-time police officer. The provision of a municipal water supply and sewerage system has been one of the main concerns of the Council since its early days.

In 1957, the bulk of the Council's revenue comes from Provincial Government grants. The Municipal Service Fee comprises a poll tax of only $7.50 per year for residents of the town, and $5.00 per year for residents of Bell Island living outside the boundaries of the Town, but employed within the Municipality. There is no tradition of tax payment, and difficulty is experienced in collecting even this small sum. The business tax is limited to $1,000 per year so that an important industry such as the Mining Company is required to pay no more than this.

Of Bell Island's total population of approximately 12,000 [in 1957], about 8,000 live within the Municipal boundaries. Approximate population figures for each area are:

In 1957, apart from a school bus service, there was no regular bus service, only an "occasional" bus that ran from Town Square to the west of the Island, but it had no fixed schedule.

There were about 12 taxis on the Island. The charge per passenger from the ferry landing to "the town" was 50 cents.

There is an hourly ferry service between Portugal Cove and the Island, taking 20 minutes, operated by the Newfoundland Transportation Company, with two vessels: Elmer Jones and Kipowa carrying about 20 and 6 vehicles respectively, as well as passengers. The charge for a heavy truck loaded is $14,00 and this is reflected in the increased price of goods on the Island. Inclement weather may prevent a crossing and in 1957 frozen seas interrupted the service for several weeks.

There is no regular air service, but a flight by helicopter from Torbay Airport near St. John's to the Playing Field in the centre of the town takes 10 minutes.

Electric power is supplied both for industrial and domestic consumption by the Newfoundland Light and Power Co. Ltd. through three submarine cables from St. Philips (on the main coast 3 miles distant) to a substation at Dominion Pier. From there, overhead lines carry the power all over the Island.

Telephone service is provided by Avalon Telephone Company and covers the Island. Overhead wiring shares the electricity poles. An automatic exchange is being installed to replace the present call system.

Water for industrial and fire protection purposes is obtained by the mining company from its 20,000,000 gallon reservoir at West Dam in the centre of the Island, and by pumping from sumps in the Mine slopes. For its domestic supply, the Company has three deep-wells drilled to a maximum depth of 950 feet, from which approximately 150,000 gallons of water per day are pumped and distributed through a system of 4-inch mains. These are designed to supply Company-owned Staff houses, dryhouses and office buildings, but many unauthorized private connections have also been made. Most of the houses on the Green and in Bennett Street and the Company-built houses at Scotia Ridge and the Dominion Ranges have this water supply.

Regarding sewerage, there is no existing sewerage system. Buildings are served either by privies or by cesspools or septic tanks. Some Company-owned buildings are connected in groups to communal septic tanks. Owing to the lack of topsoil in the area of the town, and its general impermeability of the subsoil, existing conditions are a matter of concern to the health authorities.

Regarding garbage disposal, the town dump used to be situated on open fields immediately to the east of the Green. After complaints from the inhabitants of the nuisance and of the danger from burning debris blown by the wind, in 1957, the dump was moved to abandoned cuttings in the extreme northeast of the Island, where it is periodically covered with rock rubble. There are other cuttings west of No. 6 Mine also suitable for the purpose, and it is also intended to use the cuttings between the Green and Central area while they are being back-filled by the Company.
Some things of note:

The area of Bell Island that took in the No. 3, No. 6 and No. 2 Mines and Town Square was often referred to during the mining years as "The Mines." People who lived at The Front of the Island would use the phrase "going in to The Mines" when they were telling someone they were going to the business district to shop or visit a doctor, or going to visit someone who lived in that general area.

In the 1921 Census, "The Mines" generally referred to the neighbourhoods that took in The Green and The Valley to the north, Scotia Ridge and Ten Commandments Range to the west, Armoury Road and Main Street to the East, and anything north of the Main Brook.

In the 1935 Census, Scotia Ridge and The Valley area were listed separately from the areas listed as "The Mines."

West Mines was listed separately in both.
Here are the roads that Elections Newfoundand & Labrador lists for the Town of Wabana in 2021: