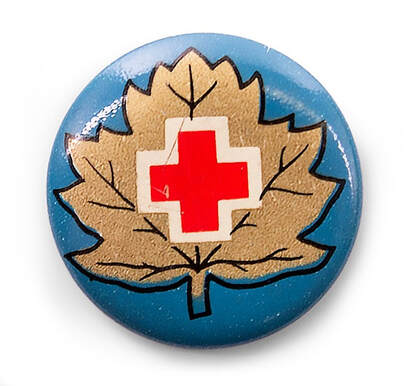 Image above of a Junior Red Cross pin is from the redcross.ca website. According to that website, the school-based Junior Red Cross operated in Canada from 1919 until the 1980s, exposing children "to the work and ideals of the Red Cross... Teachers who chose to adopt the Junior Red Cross program usually devoted one or more Friday afternoon classes per month to its activities. Students elected officers and followed parliamentary procedure, directing their own work with light guidance from their teacher. A national Junior Red Cross magazine and health-related resources for teachers supported the program. Junior Red Cross members pledged to follow the 10 to 12 rules of 'The Health Game,' undertook local community service and school beautification projects, and corresponded with Juniors in other countries. Until the 1960s, the money Juniors raised usually went into the provincial 'Crippled Children's Fund,' paying for medical and surgical treatment for Canadian children with orthopedic and other physical disabilities. Membership in the Junior Red Cross reached its all-time peak in the late 1950s to early 1960s when much of the Baby Boom generation was of school-attending age."

My own vague memories of Junior Red Cross activity was during the 1950s and early 1960s at St. Augustine's and resembled some of the things mentioned above, with the emphasis on good health/hygiene practices, such as the need for regular teeth-brushing, clean hair and fingernails, and clean clothing. I remember it being a Friday afternoon thing, for which we brought pennies to school to donate to the Crippled Children's Fund, and received a small round badge featuring the Red Cross symbol to attach to our blazers or tunics. There was usually some sort of fun activity involved and was a less-stressful way to end the school week.

The Church of England Academy on Bell Island seems to have incorporated it into the curriculum in 1942, as implied by the following reports from the 1943 Academician school yearbook. (Academician ​images courtesy of Glenda Bursey.) 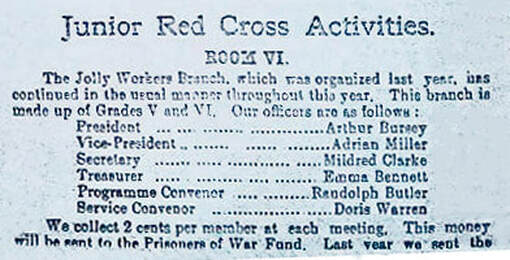 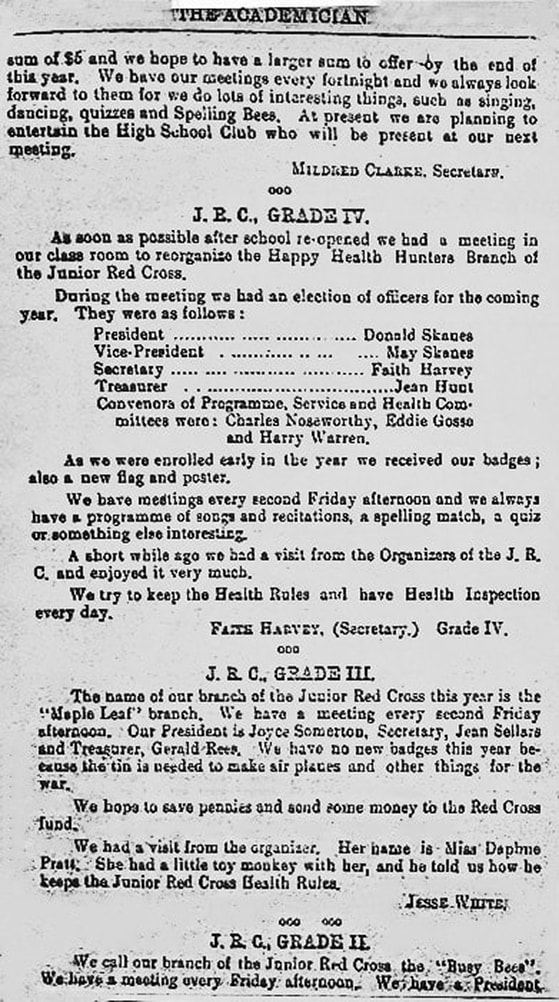 The 1953 Academician yearbook had reports from Grades 2 to 7 of the Junior Red Cross activities in each of those grades during the past year. Meetings were held every second Friday.

In all but Grade 2, each class elected a slate of officers for the school year. According to their report, the second graders were too young to have officers, so their meetings were guided by their teacher. Officers elected included President, Treasurer, Secretary, Program Convenor, and Health and Cleanliness Convenors, although not all grades mentioned all of those positions in their reports, and one mentioned having a Vice-President.

Most of the grades gave themselves a name:

Some of the activities during meetings included:

Business;
Collection of pennies, which were sent to the "Crippled Children's Fund" at the end of each year, with some
being used to purchase First Aid Kits for the classroom;
Health inspections and discussion of good health habits; obeying the health rules seemed to be a main
objective of the meetings;
Games; songs; jokes; story telling; recitations; exercises; and Spelling Bees.

Meetings were closed at 3:15 with the singing of the national anthem.


The 1955 Academician (courtesy of Yvonne Saunders-Sinnott) had reports of the Junior Red Cross from Grades 2 to 4.

The Grade 4 boys' "Ever-Ready Branch" had a meeting every third Friday. They had a Junior Red Cross Shirt that each pupil in the class took home, sewed a patch on and placed money inside the patch. The class opened the patches in December and bought used some of the money to buy a pencil sharpener for the classroom and a box of chocolates for a classmate who was in hospital. The plan was to "send the shirt away soon," presumably with the remaining money inside for the "Crippled Children's Fund." After the business part of each meeting, the pupils participated in a short entertainment of singing and recitations. The aim of the meetings was "to get boys to do their part in learning and carrying out the rules of the branch, then try to impress upon them the part they must play in their service to mankind."

The Grade 4 girls' branch were the "Willing Helpers," who met every second Friday. "At each meeting, the President calls the meeting to order. The Secretary reads the minutes of the last meeting. The Treasurer gives her report and takes the collection. We discuss our business and then we have our programme. We close by singing the National Anthem."

The Grade 3 boys' "Willing Helpers" were "packing a health kit which we hope to send very soon to children in far countries and we are saving our pennies to go toward the 'Crippled Children's Fund.' Every second Friday, we have a meeting when we sing songs, have a spelling bee, read stories or have a health lesson."

The Grade 2 girls' "Wee Workers" and boys' "Happy Helpers" branch also sang did recitations and had heath plays. "We made several school kits which were sent to children in the far east, and we are now saving our money to buy a First Aid Kit."

In the 1961 yearbook, by now called Focus, St. Aidan's School, West Mines, reported that Junior Red Cross was active in each classroom from Grades 3 to 6. "While their activities were under the direction of the teacher, yet each branch had its own officers, who carried on the business of the meetings and provided the programme." They held fortnightly meetings and money collected went to help crippled children.