Memorial Day, July 1st: This is a Newfoundland observance that commemorates the loss of 733 soldiers of the Newfoundland Regiment during the Battle of the Somme at Beaumont-Hamel on July 1, 1916, during the First World War. It has been observed annually since July 1, 1917.

On Bell Island during the mining years, the service at the War Memorial was held on the Sunday following July 1st, so that in 1954, it was held on July 4th. Ex-service men of the World Wars I and II, and of the Korean War, members of the Army Cadet Corps (Catholic Cadet Corps), the Church Lads Brigade, accompanied by the bugle bands of the Cadet Corps and the CLB and the brass band of the Loyal Orange Association, paraded to the War Memorial where hundreds of citizens had gathered to take part in the service, which was held in respect of those who died in the cause of freedom.

The photo below, showing the scene at the War Memorial about 1958, was taken by Tom Careless and is courtesy of his son, Dave Careless. Everyone dressed in their "Sunday best" and wore little blue, artificial, Forget-Me-Nots, a flower that grew wild in the Beaumont-Hamel area. 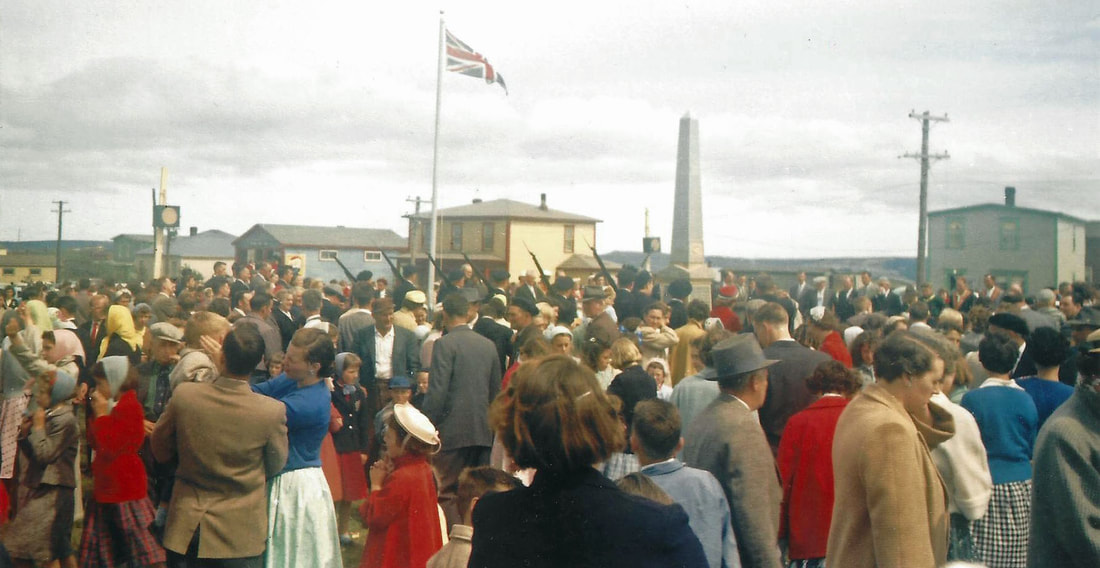 Memorial Day coincides with Canada Day, which was called Dominion Day, in 1954. That year, Dominion Day was observed on Friday, July 2nd. This was by mutual agreement between the (mining) Company and the mine and office staff unions. Instead of observing the holiday on that Thursday, July 1st, all mines and departments ceased operations at 8:00 a.m. on Friday and reopened the following Monday, thus affording the majority of employees the opportunity of enjoying a three day holiday. Many employees took advantage of the long weekend by taking their families on an outing to the local mainland, while others chose to get in a day or two of fishing at their favourite pond or stream. Mainland employees enjoyed the long weekend holiday with their families and friends at home, returning to the Island Sunday evening.