PUBLICATIONS
NOTES ON BELLE ISLE
BY MRS. B.B.E. (Believed to be Belinda Bartram Ebsary, nee Pitts)
Evening Telegram, Dec. 4 & 5, 1902
Introduction by Gail Hussey-Weir
​August 16, 2022
The following article appeared in 2 parts in The Evening Telegram in 1902. Part 1 appeared December 4, 1902 on page 3 and Part 2 on December 5, 1902 on page 3. The article was submitted to the newspaper by Rev. Walter R. Smith, who was the Church of England minister in Portugal Cove at that time, having been there since at least 1892. It seems that someone of Rev. Smith's acquaintance had passed along to him the manuscript of "Notes on Belle Isle," that was written by "a St. John's lady of over four score (80) years of age, and who was born at Belle Island." He says in his own comments on the article that this is "an abbreviated copy" as the paper lacked space for publication in full. That is too bad as the full version would undoubtedly have had much more information that has now likely been lost to us. He also does not say who edited down the document; if it was not Mrs. B.B.E., then some facts may have been altered in the editing process.

In the article, we only learn a few things about the author of "Notes on Belle Isle":
- all we have are her initials: "B.B.E.";
- she was born on Bell Island about 1820 as she was "over 4 score years of age" in 1902;
- she was probably born in Lance Cove as most of the document concerns that area of Bell Island and she seems to know its history intimately;
- she was living in St. John's in 1902 and seemed to know that place well, so was probably living there for a good while.

Given the above clues to the identity of Mrs. B.B.E., and her intimate knowledge of the history of James Pitts of Exeter, England, I have come to the conclusion that she was his granddaughter, Belinda Bartram (Pitts) Ebsary (1816-1906), the eldest daughter of his son James Pitts (1784-1870).

Some points made by Mrs. B.B.E. and topics she covered in this article:
- The first inhabitants of Bell Island came from Portugal Cove.
- Her take on the name Belle Isle, the Bell Rock, and the Clapper.
- The first inhabitant/owner(?) of Lance Cove that she knew of was an American named Greeley.
- Greeley sold to a man from Exeter, England, in the Parish of Ade, who bought the whole cove and went there to clear the land about 1783. [While she did not name this man, her description fits what is known of James Pitts.] He cultivated fruit and vegetable gardens and supplied the military in St. John's with these, plus beef and poultry. He brought two young men from England to assist in this enterprise and gave each of them a farm of their own; one of whom had the best farm on the Island in a few years.
- Small ships of war were built in Lance Cove before the Exeter gentleman bought the Cove from Greeley. A house was standing at Lance Cove at the time of the purchase.
- The "gentleman from Exeter," as she referred to him several times, was born about 1735 and died about 1805. He had three sons who inherited his estate. They went into other successful businesses, including ship building for the seal fishery, and traded to New York, Boston and across the Atlantic in fish and oil.
- There was a school on Bell Island in 1808, taught by a Mrs. Myers. When she left, the Lance Cove children were sent to Portugal Cove to be taught by the Methodist Minister who kept a school there. A Mrs. Perrington was the next to have a school on Bell Island, then a lady named Hay, then one named Burton. After that, the lawyer, Sir Bryan Robinson, got the first regular Government school, taught by a Mr. Willoughby. Before then, the Lance Cove people paid the teachers themselves.
- In 1814, one of the three Pitts sons went to England and brought back the first large 8-day clock ever imported into Newfoundland. The making of this clock by Benjamin Bowring resulted in him coming to Newfoundland to set up business. Mr. Pitt's 8-day clock was regulated by the 8 o'clock gun on Signal Hill, which could be plainly heard in Lance Cove.
- Benjamin Bowring's businesses in St. John's and visits to Lance Cove.
- Other St. John's business people and "officers from the garrison" who vacationed in Lance Cove.
- In 1825, things were flourishing in Lance Cove, with ships being built that fished the Labrador and Western Bays and fish were brought to the Island to be cured. A large number of coopers supplied barrels for fish and oil for the St. John's market. There were also "fine stores" at Lance Cove for carrying on the trade.
- Iron ore was first discovered on Belle Isle in 1826 by Archdeacon Coster, who found traces of it at Lance Cove.
- In 1835, ice filled Conception Bay from the first of June until the 24th.
​
So, let's get to the article itself. The newspaper led off with a letter of introduction from Rev. Walter R. Smith, but I feel his letter is a distraction, so I have placed it at the end of the article. 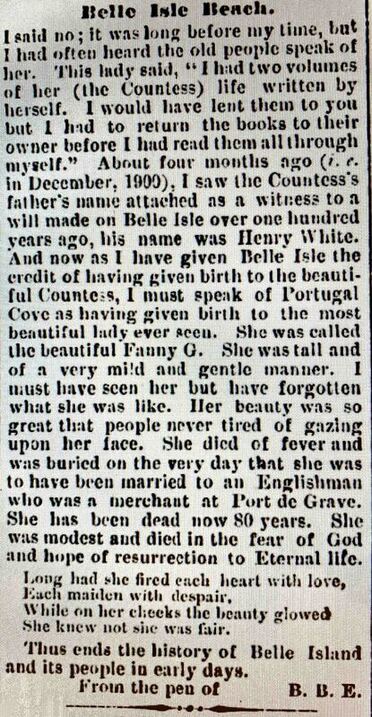